MAESTRO: WAR AND PAX #5 hits comic book stores on Wednesday, May 26th, bringing an end to this exciting Maestro miniseries. The Jade Giant found himself face-to-face with Doctor Doom, who he presumed to have perished with the other superpowered types in the past. Readers will witness a clash of titans in their vie for the throne in Dystopia. Bruce Banner might be the strongest there is, but Doom is known for having plenty of tricks up his sleeve.

The story opens with an engaging internal monologue from Banner. Hearing how the tyrant views himself helps readers understand why he makes the choices he does. It confronts us with an unsettling question: If we had unlimited power, would we use it to rule over others? For Maestro, the answer is clear. 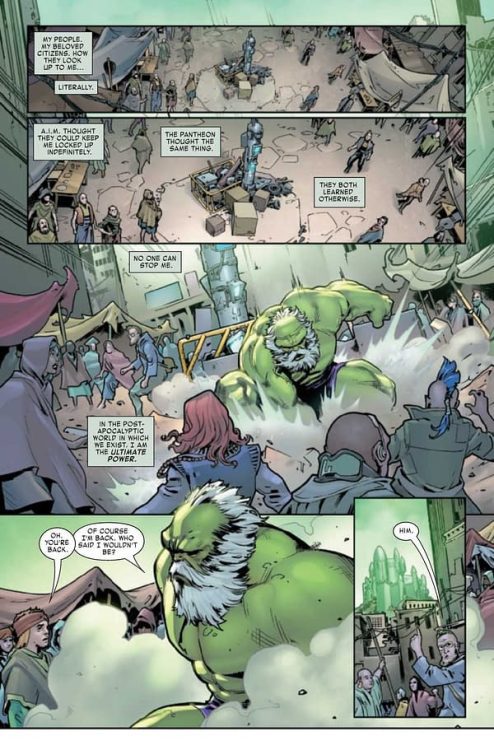 The city dwellers point Banner to Doom, who is now claiming the title of ruler in Dystopia. Readers would reasonably expect the two to dish it out upon meeting, but, surprisingly, they exchange formal greetings. They even have a shared meal. All seems too good to be true until Banner reveals the wine Doom sipped was poisoned, leading to the clash of egos we were waiting for. 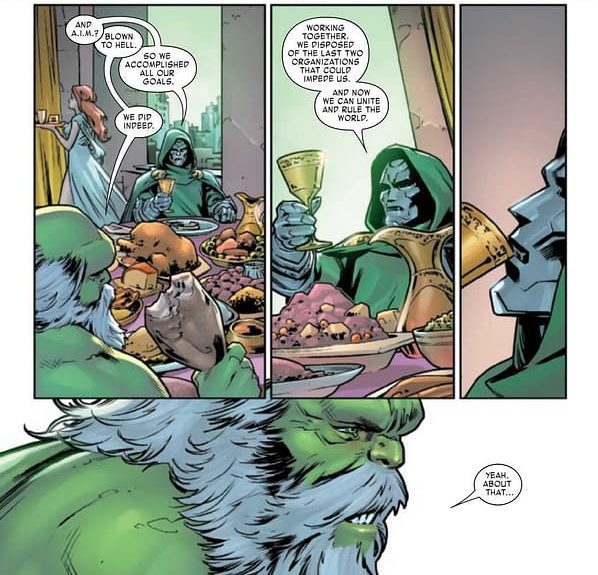 Though the two often found themselves at odds in the past, something seems more enticing about this interaction. The jabs, insults and monologuing between these two is priceless. If readers didn’t know Banner had crossed the threshold into full villainy, they do now.

Peter David’s narrative writes both characters with impressive authenticity. These two are more similar now than ever before, yet they retain the unique aspects of their personalities that led us to love them.

Javier Pina and Germán Peralta’s penciling and ink work, Jesus Aburtov’s coloring, and VC’s Travis Lanha’s lettering offered high quality illustrations for readers. The bulging muscles, colorful sorcery and destroyed buildings throughout the story’s setting draws us into its world. We also loved how the word balloons framed each moment of action, giving readers the details they needed while pointing them to the visual elements.

MAESTRO: WAR AND PAX #5 wraps up this miniseries in perfect Hulk fashion. The massive power of each opponent is only matched by their enormous egos.

What do you think lies in store for the citizens of Dystopia? Let us know in the comments below!