Review: LOIS LANE #2 Shows A Journalist On The Prowl

Lois Lane #2 from DC Comics showcases the lead character’s brilliant journalistic prowess, and proves she can hold her own in a world filled with superheroes and mysteries.

As big as a DC staple as Lois Lane is, she has hardly had her journalism side in the forefront of her character in any stand-alone series, or when featured in others. If/when she is around others, they dampen her abilities, or just have her as “Superman’s Girlfriend.” Much like the 1958’s Superman’s Girlfriend, Lois Lane, which had Lois using her skill to a degree but never for a long winded story, or how DC would place her constantly in Superman’s shadow and have her rely on the Man of Steel. Luckily that has changed with DC’s Lois Lane (2019), by writer Greg Rucka, artist Mike Perkins, colorist Paul Mounts, and lettere Simon Bowland.

We open our second issue with multiple talk shows blasting Lois, not on her comments in the previous issues, but on more scandalous matters: her relationship between Clark and Superman. Because what is news now other than entertainment and drama? Greg Rucka brings this up often in Lois Lane with passerby’s constantly calling her “slut” and the like while in earshot of Superman. This happened in the previous issue but is brought up again. The nice farm boy that he calls himself, Clark asks Lois just how she deals with the constant bombardment of her being a woman and what others say. Easily: she tunes it out.

Through the issue, we join Lois as she dives deeper into the mysteries of the previous installment with the ‘suicide’ of Mariska. As Lois’ muscle woman, and backup is Renee Montoya (The Question). One of the best parts aside from the slow burn of a plot is Lois’ interaction between her and her own cast of side characters. With appearances from Perry White, who constantly fixes her grammar (a great call back to the days of yore), and her interactions with The Question. When Lois and The Question are together it makes you question why they have never teamed up before! It just makes perfect sense and they play off of each other perfectly. 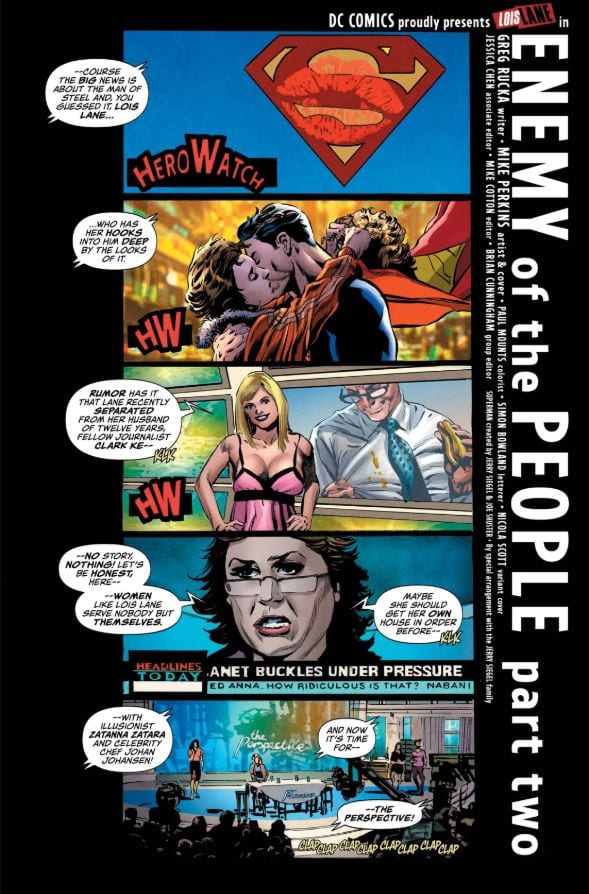 When Rucka writes Lois and Clark together, it feels different than any other comic recently has portrayed. With the duo acting like an adult couple (even though they are ‘separate’) and talking through their problems, our just how they respect each other while believing greatly in another. This is one of the best representations of the duo seen in years making them seem more human and not just forced together because that’s how it’s supposed to be. The investigative vibes from Rucka’s plot and dialogue wouldn’t flow if it wasn’t for the art courtesy of Mike Perkins and colors of Paul Mounts.

Perkins art has a great noir vibe throughout that feels gritty and grimy, but when there are moments of clarity the pencils come off quite lively. With the backgrounds mattering a great deal in some panels and pages Perkins paints a clear picture of what’s going on, while also hiding some moments. This sense of clarity flows into the few fight scenes looking fluid and easy to follow, but when characters faces become the focus in some panels and dialogue moments we lose said clarity. In some cases the faces look as if they were drawn correctly but then photo scanned on itself and shifted to the side, or their eyes and features are small compared to the whole face. 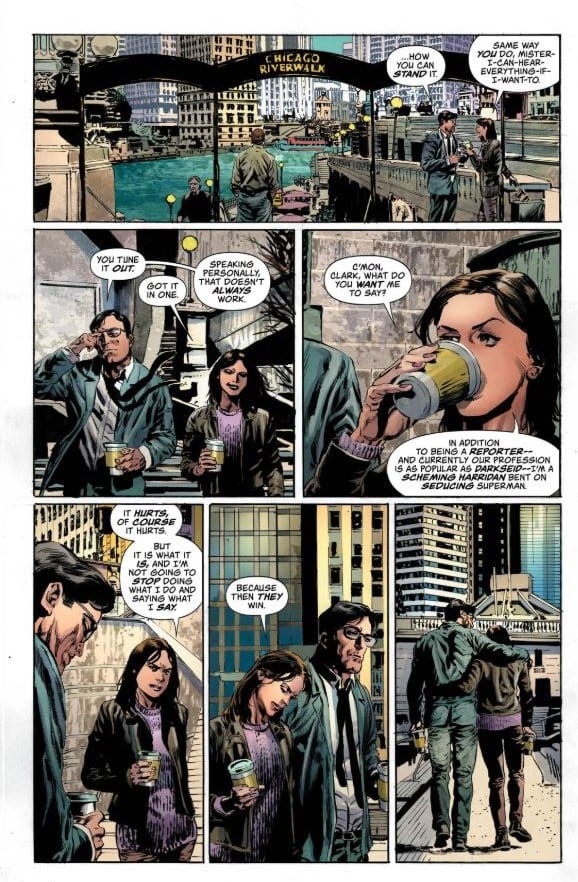 These faces happen enough that they stand out compared to other aspects of the art which otherwise is married perfectly to the story. In a few instances the shadows on some characters faces seem off which cases this awkwardness to occur. Thus bringing us to our next point: Mounts colors.

A fair amount of Lois Lane #2 is during the day or in an enclosed location, so to match this we have dull and muted colors that work perfectly. The few times during the day when bright and sunny you can feel the beautiful weather as if you were in the page yourself. Mount does great work with helping set the mood with one rainy moment in Moscow running supreme, but in some occasions the shadows and coloring seem off on the faces.

Lois Lane #2 is a great continuation of the first issue with a fantastic look at Lois’ investigative ways, while showcasing how great of a character she is with her own side characters. Rucka helps Lois step out of Superman’s heavy shadow while emphasizing the best aspects of her character. Only falling short on some panels were faces are the focus. Lois Lane #2 shows how a character who in history has just been an armpiece can hold her own in a world filled with superheroes and mysteries.

If you aren’t reading Lois Lane, you need to be. And the Jimmy Olsen comic! Both Superman side characters have great maxi-series going on! Like the Man of Steel, get in your Supermobile and head over to your favorite Comic Shop!

Memorable Quote: “In addition to being a reporter — and currently our profession is as popular as Darksied — I’m a scheming harridan bent on seducing Superman.” – Lois Lane. Damn Lois, spitting some hard hitting facts huh?

Lois Lane #2 gives us a great dose of Lois’ journalistic prowess, while putting a spotlight on her love life.Review: LOIS LANE #2 Shows A Journalist On The Prowl