Review: Lies And Prophecies In SWEET TOOTH: THE RETURN #2

Writer and artist Jeff Lemire returns to the story that arguable made his career for the second chapter of “Sweet Tooth: The Return.” Where the prior issue was steeped in mystery and confusion about what became of the world since the original comic, this follow-up clears much of that fog by answering some questions and deepening the connection between this series and its acclaimed predecessor.

“Father is not very happy with the boy. The boy should have listened to Father. Surely, every boy needs to play, run, and be wild…but the boy can never be free…not really. Now the boy has done something quite bad and made Father very unhappy. Go to your room, young man! But the rooms here are very small, and dark, and cold, and the boy is not very happy in them. No one is happy. But sometimes, even from a bad time, something special and unexpected can blossom.” 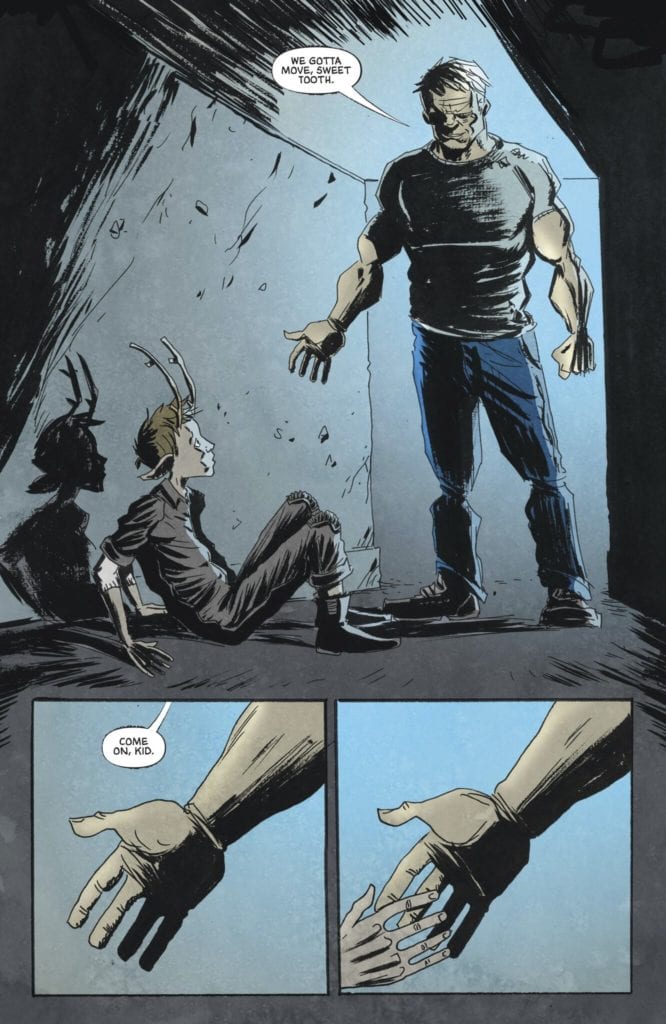 Jeff Lemire’s signature style of taking grandiose concepts and shrinking them down into digestible bits via character-building holds here in “Sweet Tooth: The Return” #2. The secrecy and confusion in the last issue is cleared up quite a bit, and it’s accomplished through uh, “The Boy’s” (his name is a spoiler) interaction with the world and people around him. Lemire’s ability to ground stories in how people are affected in a given world is one of the main aspects of what makes him special as a writer. The concepts covered in the original Sweet Tooth are still here, but they’re covered up in a steadily clearing layer of haze. This is obviously due to Lemire not wanting to give away what exactly has happened to this world since the original comic ended, but it’s also a neat narrative trick for people who read the original comic…quite some time ago. I last read all of Sweet Tooth almost 2-ish years ago, and while I remember the key points and characters, there’s a lot that is fuzzy (albeit familiar) to me. Lemire puts us in The Boy’s position whether he intends to or not; showing familiar images in a familiar order, but in a sequence that doesn’t match up. Rediscovering this story and world has been a wonderous experience these first two issues, and it’s made me want to go back and reread the original series even more. Lemire’s charming dialogue sensibilities are still on point, making for a comic that is a stellar mix of tense mystery and character story worth investing yourself in. 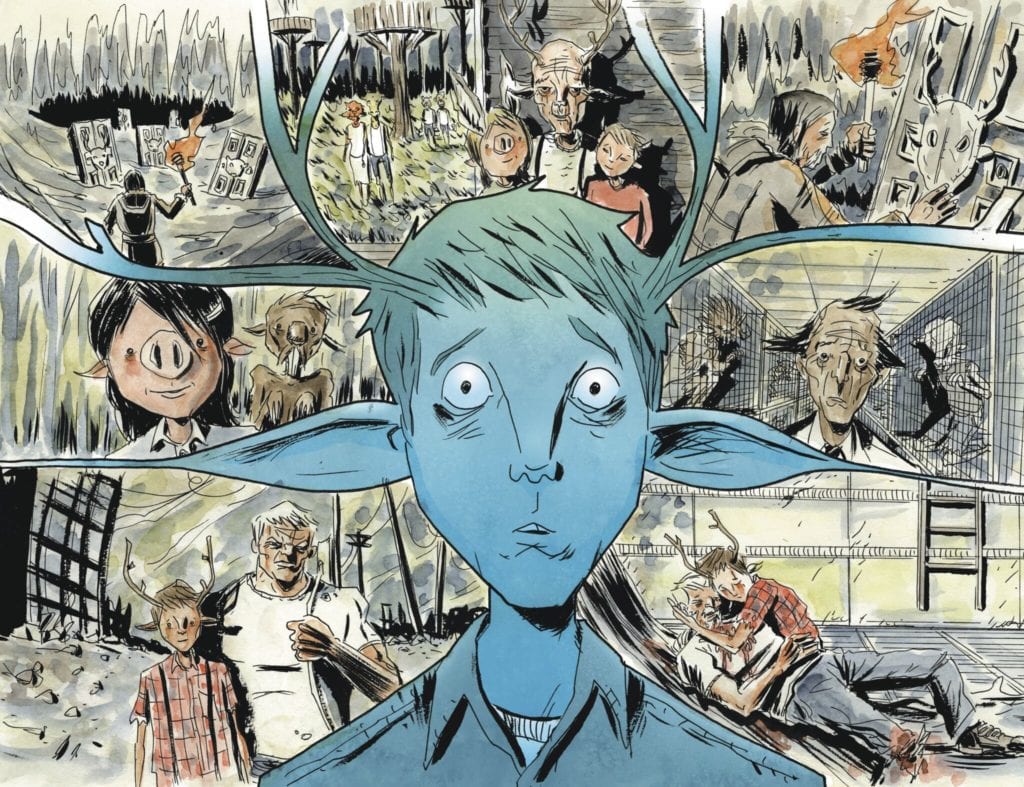 I said in my review for “The Return” #1 that this story could not be told without Jeff Lemire’s pencils working alongside his words. This holds true here on the second issue, and I doubt there will ever be a time this changes. Much like his scripts, there’s an almost indescribable charm to Lemire’s art that makes it absolutely perfect for the world of Sweet Tooth. The characters, while all presented in Lemire’s signature rough-hewn thin lines and skinny bodies, all have fantastically well-animated and expressive facial expressions as well as a uniqueness in each person’s design. The details are surprising as well, with articles of clothing being lined with pockets,, seams, and wrinkles that pull off a realism not expected in a comic with this kind of art style. The impossible-to-duplicate aesthetic of this series is also crafted by the watercolor style of Jose Villarrubia. His unique multitude of shades is matches and fills in Lemire’s pencils with a visual eye that pulls off similar tricks to the story’s creator; things are completely grounded in one moment, but then take off in strange and hypnotizing directions when the story gets mythic. The visual look of both this and the original comic is unmistakable, and this story couldn’t be presented with in any other way. 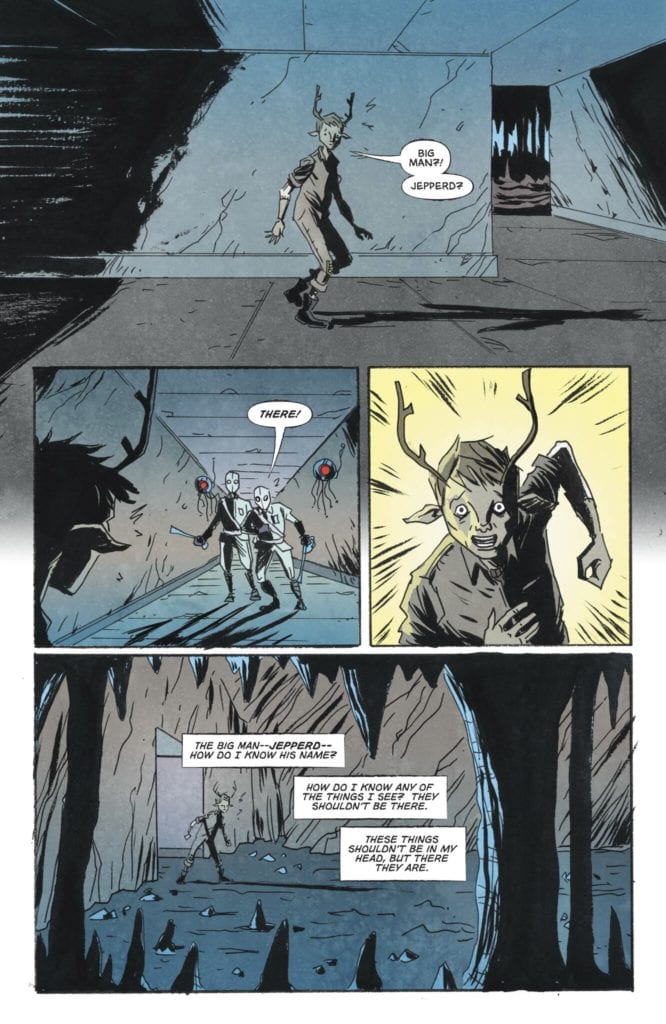 “Sweet Tooth: The Return” #2 is a stellar second chapter that clears up some of the mystery and connects the dots between this comic and the original Sweet Tooth. Lemire’s charming character writing and ever-fantastic plotting hold strong in this issue, as well as his ability to keep a story interesting by giving the reader tasty crumbs of intrigue in every chapter. The visuals by both himself and Jose Villarrubia are the signature rough-edged but delightful aesthetic this series is known for and I wouldn’t have it any other way. Be sure to grab this issue when it arrives at your local comic shop on 12/8!

An exciting second chapter that clears up the haze of mystery and reveals some of its connections to the original comic.Review: Lies And Prophecies In SWEET TOOTH: THE RETURN #2