JIM HENSON’S STORYTELLER – GHOSTS #4, available from BOOM! Studios on August 5th, is a Slavic tale of death, loss, love and the power of a promise. Ver’s story and art is worthy of the most heartfelt entries from any anthology series such as The Twilight Zone or Amazing Stories.

Michael Walsh’s cover latches on to the dread of those things that wait just behind you in the dark. The Old Woman, the stories main protagonist, hangs on to her lantern as tightly as she hangs on to life itself. All the while, Weles, the Slavic grim reaper, watches and waits for the opportunity to strike. Walsh’s cover is anxiously haunting.

Ver’s story follows an Old Woman fighting to make her way home in the dark to keep a promise to her family. During her journey, she’s accosted by all manner of demons and even the god of Death from Slavic mythology trying to prevent her return. Her only mode of protection is a single lamp that keeps those that live in the dark at bay.

Once she reaches her destination, the true nature of her journey is revealed and it resonates deeply with anyone who’s ever felt the painful loss of a loved one. I can’t express how powerfully this story tugs on the emotional heart strings in a way that honors those last goodbyes. Moving and poignant work her from Ver.

Ver’s artwork stands out for its clean lines and mildly realistic. Although the story is squarely centered on the emotional pain of loss, the demonic zdusze are truly something out of a nightmare. Mis-shapen Anatomy, grotesque crawling movements, and eyes that stare without seeing. It’s horrifying in exactly the way you expect to see the horrid things coming for you in the dark.

Likewise, Weles and his henchman are terrifying but in a completely different way. Ver created a mystical god that is as terrifying and cruel as it is majestic. Ver’s designs for Weles and its henchmen look right at home as god you’d find on ancient tableaus in ancient houses of worship. Ver has demonstrated a mastery of horror characters in this art. 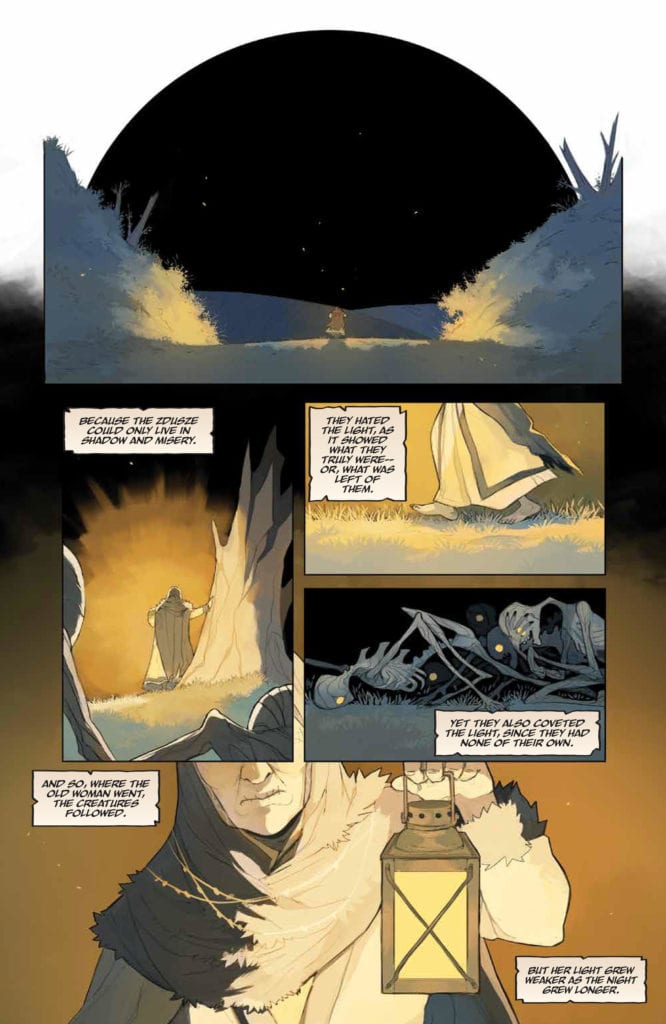 This entire tale rests on the clash between darkness and light. Ver used the splashes of yellow against pitch black to surround the Old Woman in a lonely glow that shrinks as she approaches the house. You can feel the tension build as the light and color shrinks to the size of a flickering candle on the verge of going out. It’s an excellent example of coloring restraint that heightens the tension rather than diminishing it.

Jim Campbell’s lettering stands out for its depiction of whispers emanating sourcelessly from the dark. In several panels the Old Woman hears echoes and continuations of her own thoughts coming from the pursuing zdusze. Those words flow through the dark in precisely the way you would imagine the dark itself mocking your escape. The whispers look great and add to the tone despair and fear. 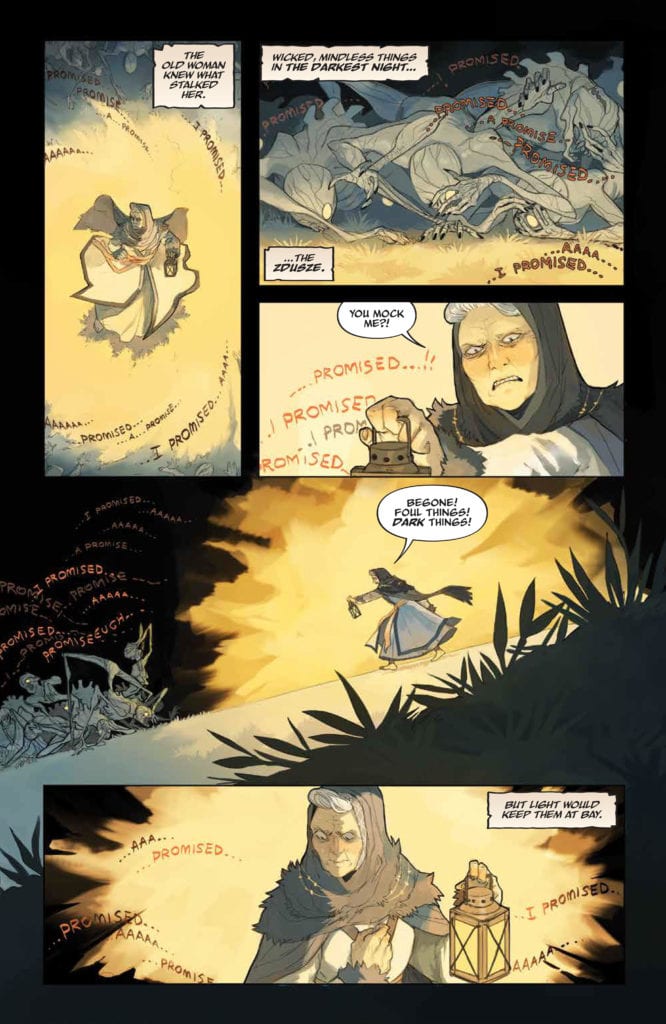 JIM HENSON’S STORYTELLER – GHOSTS #4, available from BOOM! Studios on August 5th, is a haunting, sometimes heart breaking, tale that reminds you a promise to a loved one can overcome the fear of the dark and even Death itself. Highly recommended.