Review: It All Comes Tumbling Down In ARKHAM CITY: THE ORDER OF THE WORLD #6

Back when Frank Miller and Alan Moore were working separately to bring more adult sensibilities to Batman, they both came to the same conclusion: Batman is crazy. Which is what a more realistic Batman will always come back to. Dressing as a bat and doing karate is a perfectly sensible solution to an evil crime clown. But it won’t solve any real-world problems. The closer Batman is written to reality, the more of a maniac he becomes. So almost as a sort of counter-balance, Batman has accrued a rogues gallery of serious weirdos over the years. Characters like a shambling corpse who can only recite poetry, a man with eyes in his fingers, and a woman with a hole where her face should be. But that manic edge to Batman and his allies has never quite gone away. So what we’re left with is a Gotham both populated and run by odd, broken people. Which is why this issue of Arkham City: The Order of Things finds the infamous Professor Pyg deciding he’d be better at running his own asylum than the old Arkham handlers. The worst part is, he’s not doing a bad job.

Following the reveal last month that Professor Pyg has been gathering escaped inmates from Arkham Asylum, this issue wastes no time in establishing that Pyg’s plan was simply to rehabilitate them. Not so much in a way that would make them fit to re-enter society. Just finding ways to make them happy or calm and less prone to hurting people. Doctor Joy, disturbingly unperturbed by working for a serial killer in a deserted meat-packing plant, has decided to join his staff. She wouldn’t want to abandon her former patients after all. But despite admitting that Pyg’s done some good work, Joy is growing increasingly worried at his plans to release the most dangerous patient under his care.

While the reveal of Pyg’s plan starts this issue with a bit of curveball, Dan Watters still manages to neatly wrap up the main plot while continuing to build on the fun character work he’s done with the former Arkhamites. Ten-Eyed Man is the clear standout of the series. Once a silver-age villain with a gimmick that seemed more a hindrance than a help,  Watters brings out the inherent creepiness of a man sporting eyes in his fingers and adds a sense of mystery to his powers. The series is all too happy to leave the villain’s grasp on reality ambiguous. Is he a babbling madman or a true mystic? Who knows? Doctor Joy certainly doesn’t. 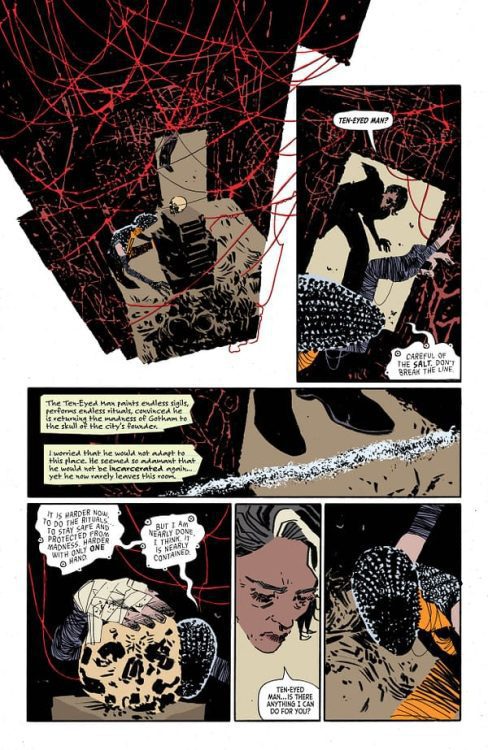 Befitting a work that keeps reality at arm’s length, Dani’s work with colorist Dave Stewart eschews outlines, relying instead on solid blocks of color and blots of ink. It feels ethereal, shadows and shapes taking precedence over all else. A big part of Ten-Eyed Man’s success is owed to Dani’s redesign, as well. His new look is immediately striking and spooky. His blank, featureless mask providing great contrast to the bright, multicolored eyes that dot the ends of his fingers. His body language is that of a contortionist, knees often bent over his head, and his body naturally folding itself into uncomfortable positions.

Stewart has considerable experience coloring for minimalist linework, and his colors confidently define the contours Dani’s lines often hint at. The technicolor weirdos under Pyg’s care always manage to brightly stand out against the duller purple, grays, and browns of the meat plant.

Letterer Aditya Bidikar gets to play around, too. They often change styles, switching to use lowercase letters on excerpts from Joy’s memos, or the bright red squiggles of Professor Pyg’s squeals. 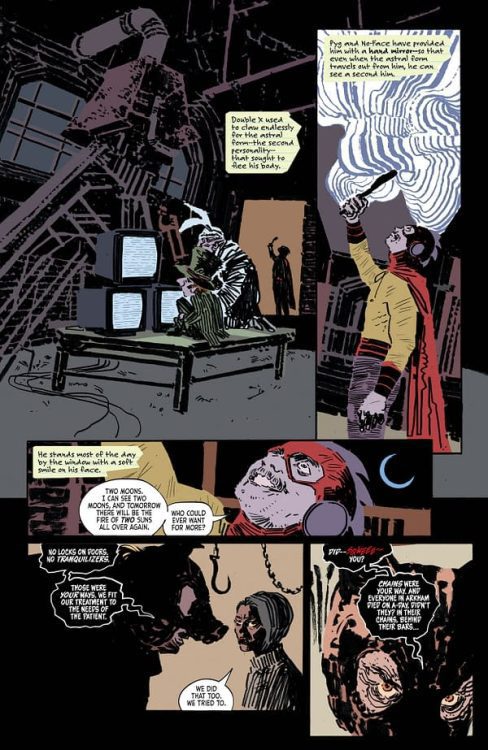 Arkham City: the Order of the World is my favorite title to come out of DC in a long while. With three out of four creators returning to working together from the Image book Coffin Bound, Arkham City has managed to harness that same creative energy towards a story centered around the Ten-Eyed Man, of all things. And it works. Wherever these creators go from here, together or apart, I’ll make sure to keep my eyes on them.