Review: The Rage Of Betty Ross Is Unleashed In THE IMMORTAL HULK #19

THE IMMORTAL HULK #19 takes a different angle than previous issues by focusing on someone other than Bruce Banner/Hulk. Readers instead bear witness to the rage and pain of another human-turned-monster: Betty Ross. Her turmoil leads her on path to Bruce, who’s busy fighting the new version of Abomination made from the corpse of Rick Jones. Suffice it to say, these three unfortunate characters are in for a confrontation that will reveal an unearthly rage and make the earth tremble.

Al Ewing doesn’t pull any punches with this story, giving full light to the innermost turmoil of its characters. The legendary author takes readers into Betty’s memory of riding with her military father and one Captain Fortean. Betty comments on a butterfly stuck in a spider’s web, wondering if it will be able to escape. Fortean remarks how it’s important for spiders to keep the insect population in balance and how the butterfly’s likely death will be for the greater good.

Betty doesn’t seem convinced and with good reason – her inner dialogue reveals she’s identified with that butterfly ever since. Ewing uses this effective parallel throughout the story to represent Betty’s rage and feelings of entrapment. Like the butterfly in the spider’s web, she’s been caught between the anger of her father and Bruce himself, struggling to stretch out her wings and truly be herself. Unfortunately, the anger has so twisted her innermost self that the resulting monstrosity wants nothing more than to kill Bruce and anyone standing in her way.

Just when one thinks the artwork in this line couldn’t be more gruesome, penciler Joe Bennett presents new levels of horror. And this is exactly what makes the comic come alive. His depictions of the Hulk’s flesh dissolving after coming in contact with Abomination’s acid are given added definition with Ruy José and Belardino Brabo’s solid ink work. And colorists Paul Mounts and Rachelle Rosenberg’s putrid greens and brown hues add the cherry on top to this horror-themed artwork. 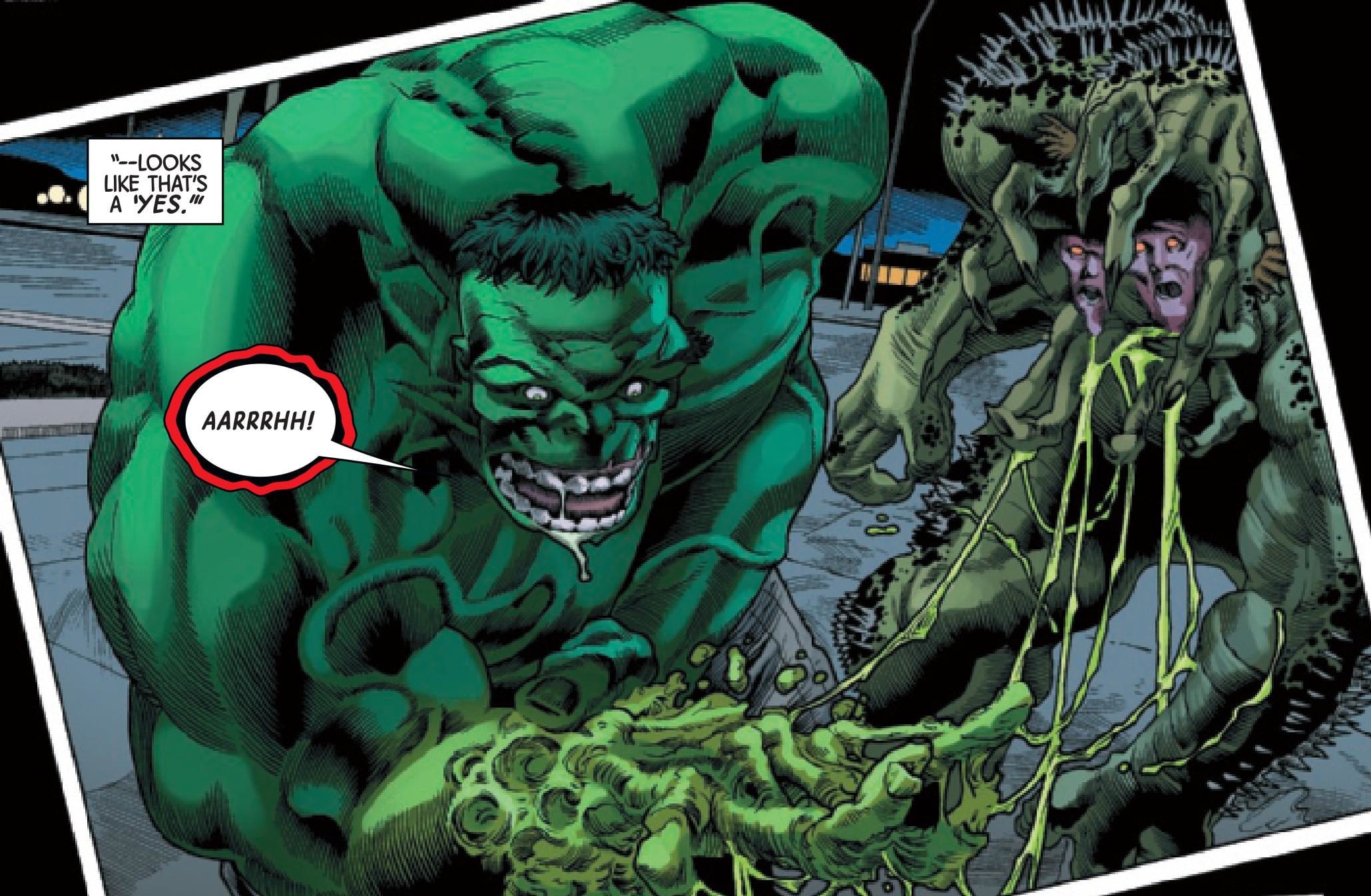 VC’s Cory Petit’s lettering further plunges readers into the story. He often features font that looks as if it’s made of slime during Hulk and Abomination’s battle scene to create the effect of it splattering all around.

Alex Ross’s main cover depicts a grotesque image of Abomination with Rick Jones’ face inside his jowls, setting the theme of inner turmoil that’s present within this story.

Greg Smallwood’s variant cover, on the other hand, features the Hulk fighting the Fantastic Four to celebrate the 25th anniversary of the MARVELS series and showcase a key moment in his history. Ema Lupacchino and David Curiel feature yet another variant that shows an armored Spider-Man being shot at, which has little if any connection to the story within.

THE IMMORTAL HULK #19 combines themes of horror, love, and pain in a way that leaves one in utter shock. Ewing, Bennett, and the rest of the creators have shown they can effectively bring the darkest aspects of human nature to life.

What did you think of Bruce and Betty’s confrontation? Let us know in the comments below!

Review: The Rage Of Betty Ross Is Unleashed In THE IMMORTAL HULK #19An action-packed, horror-filled look at the darkest parts of Betty Ross's relationships.