Grant Morrison’s GREEN LANTERN: BLACKSTARS #2, available in comic book stores on Wednesday, December 4th, takes empire of Controller Mu to Earth. In a world where the Green Lanterns never existed (thanks for Mu’s use of the Wishing Machine), the Justice League is falling apart at the seams thanks to an unending swarm of new threats. Now Hal Jordan must attempt to convince Superman to surrender to the Blackstar order lest his home planet is destroyed. 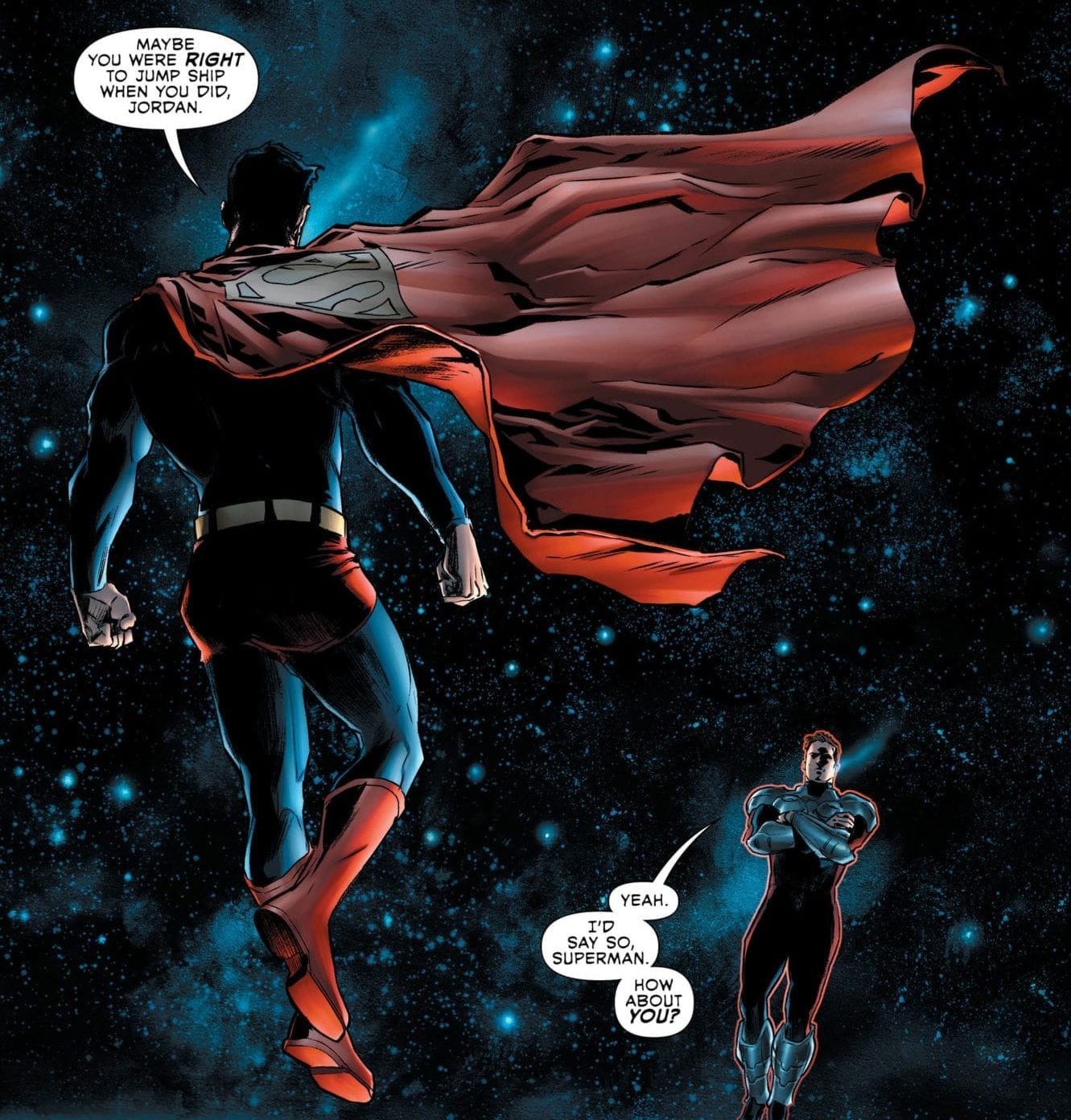 This remade universe’s Earth is spinning out of control. The lack of cohesion among the heroes has dampened hopes among the League members, especially the younger ones like Jon Kent. Rather than following his father Clark’s method of crime fighting, the boy would rather join the Blackstar ranks. Their ideology is quite convincing, much to the chagrin of Clark. 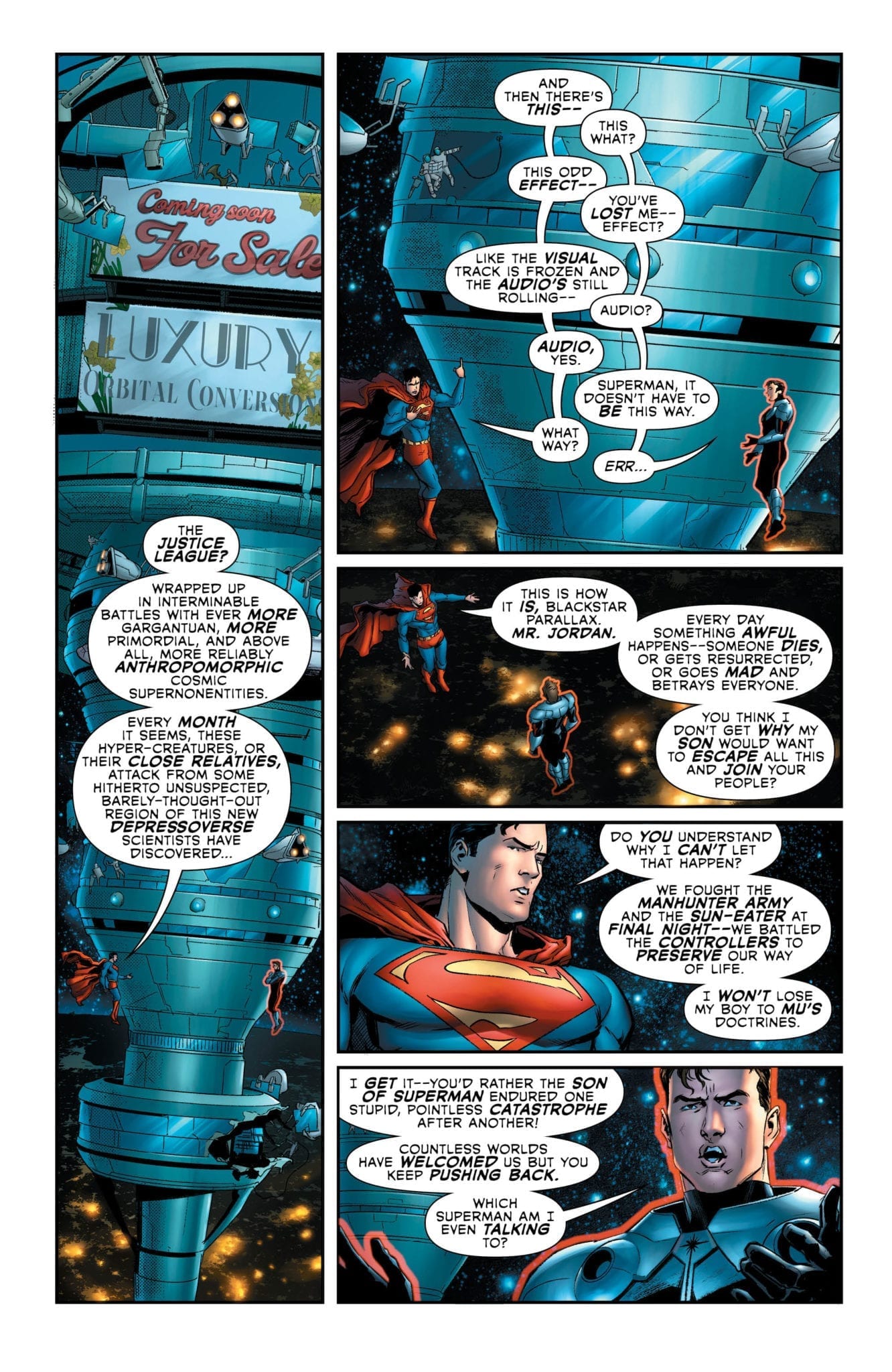 But what does this Blackstar ideology entail? How is it different from the Green Lantern philosophy of the past?

Morrison answers this question by guiding readers through Belzebeth’s past experiences. We witness pivotal moments in her life: her marriage, assassination attempts on her husband, war against the original Controllers, and her fateful meeting with Mu. We feel the gut-wrenching pain she experienced while attempting to thwart the Controller’s plans of domination, and her ultimate defeat. It’s only because of the defector Mu’s intervention that the warrior is saved; she bears witness to the former Controller’s plans to remove all violence from the universe through universal control of willpower.

But what does Hal think of this plan? Will it truly generate lasting peace in the universe? Is it a philosophy that’s diametrically opposed to the hero’s strong-willed mentality?

The artwork within this issue combines the off-kilter style made prominent by Liam Sharp in the recent THE GREEN LANTERN run with the classic look found within JUSTICE LEAGUE over the years. Xermanico’s penciling and ink work combines illustrations made up of both well-defined lines and more twisted curves, representing the supposed stability of Earth’s heroes and the unknown, dubious forces of the Blackstars, respectively. This is effectively paired with Steve Oliff’s coloring mix of nebulous colors with the brighter hues of the League members, allowing readers to see the slowly encroaching reach of Mu into ordinary life.

Another wonderful feature of this issue’s artwork was Steve Wands’ lettering; we see a shift from traditional word balloons to dialogue boxes that look like they were ripped out of one’s diary, complete with a cursive font. This enhances Belzebeth’s storytelling by personalizing the events.

Liam Sharp’s main cover artwork features Hal and Belzebeth raining down chaos upon the League, showing the ultimate fate of those who fail to surrender to Mu.

Diego Rodriguez and Darick Robertson’s variant cover is much like the main version in that it positions the two Blackstar leaders in an authoritative position over another entity–this time the entire planet. This illustration signals a major threat Mu’s forces impose upon the Earth.

GREEN LANTERN: BLACKSTARS #2, being a part of a 3-part miniseries, speeds things along at a quick past, but it does so without leaving readers behind. The story is easy enough to follow and keeps us engaged with the main plot points.

Do you think Hal will be able to reverse what Mu has unleashed? Let us know in the comments below!