Review: GREEN LANTERN #5 And The Fear Of Losing Oneself

Hal Jordan and the Green Lantern Corps have spent most of Grant Morrison’s run fighting valiantly against the evil Blackstar militia group. But a new twist of fate sees Hal volunteering to join their ranks. Which isn’t all too surprising given his growing dissatisfaction with the Corps methods. Now readers will see if Hal has what it takes to survive the Blackstar initiation process.

The issue wastes no time getting the initiation process underway by plunging Hal into the vampire-filled planet of Vorr. Countess Belzebeth, after handcuffing him, leads Hal through a landscape of gore and horror. The space cop soon realizes everything is not as it seems and finds he must leave aspects of himself behind in order to survive. 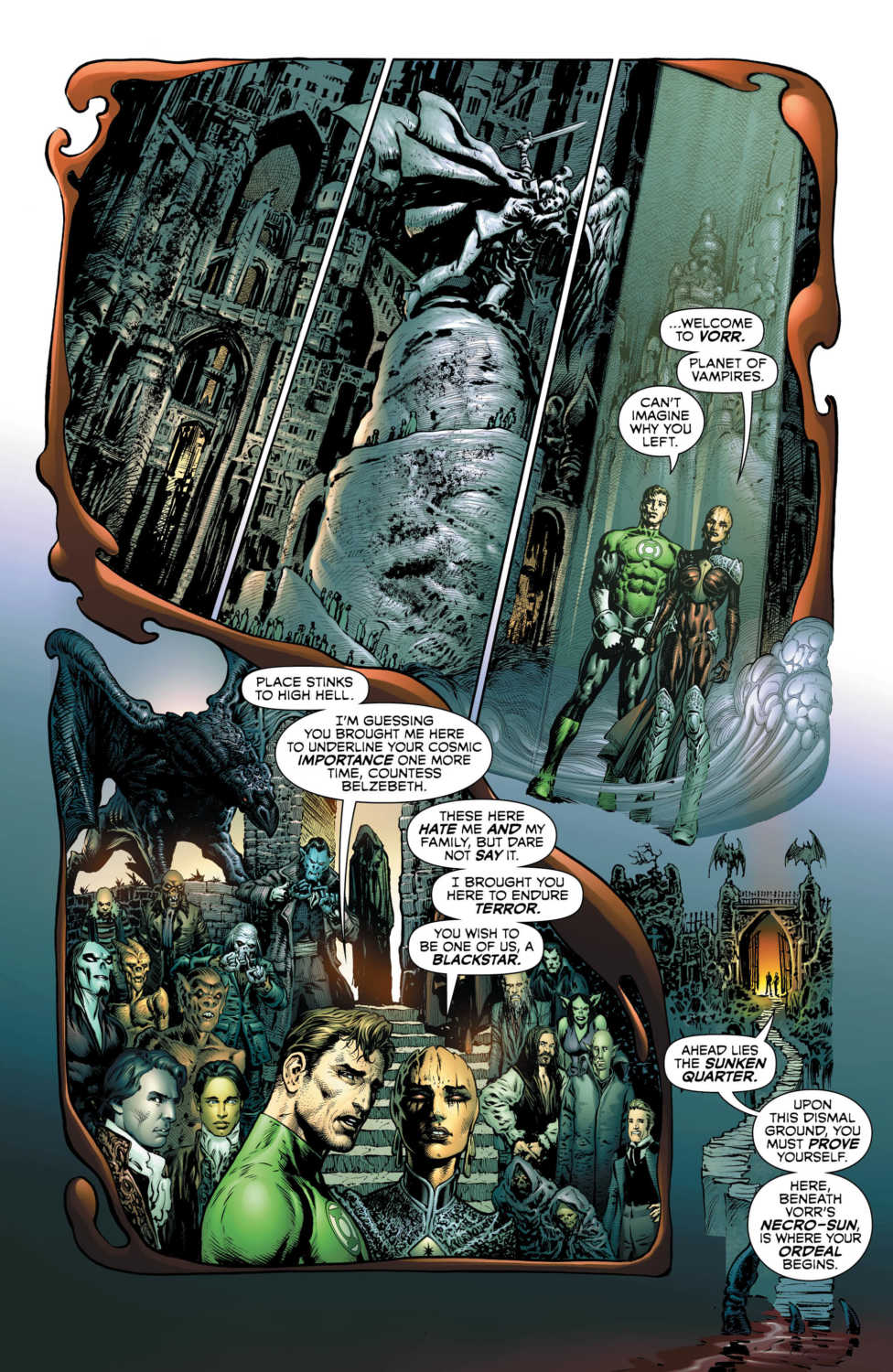 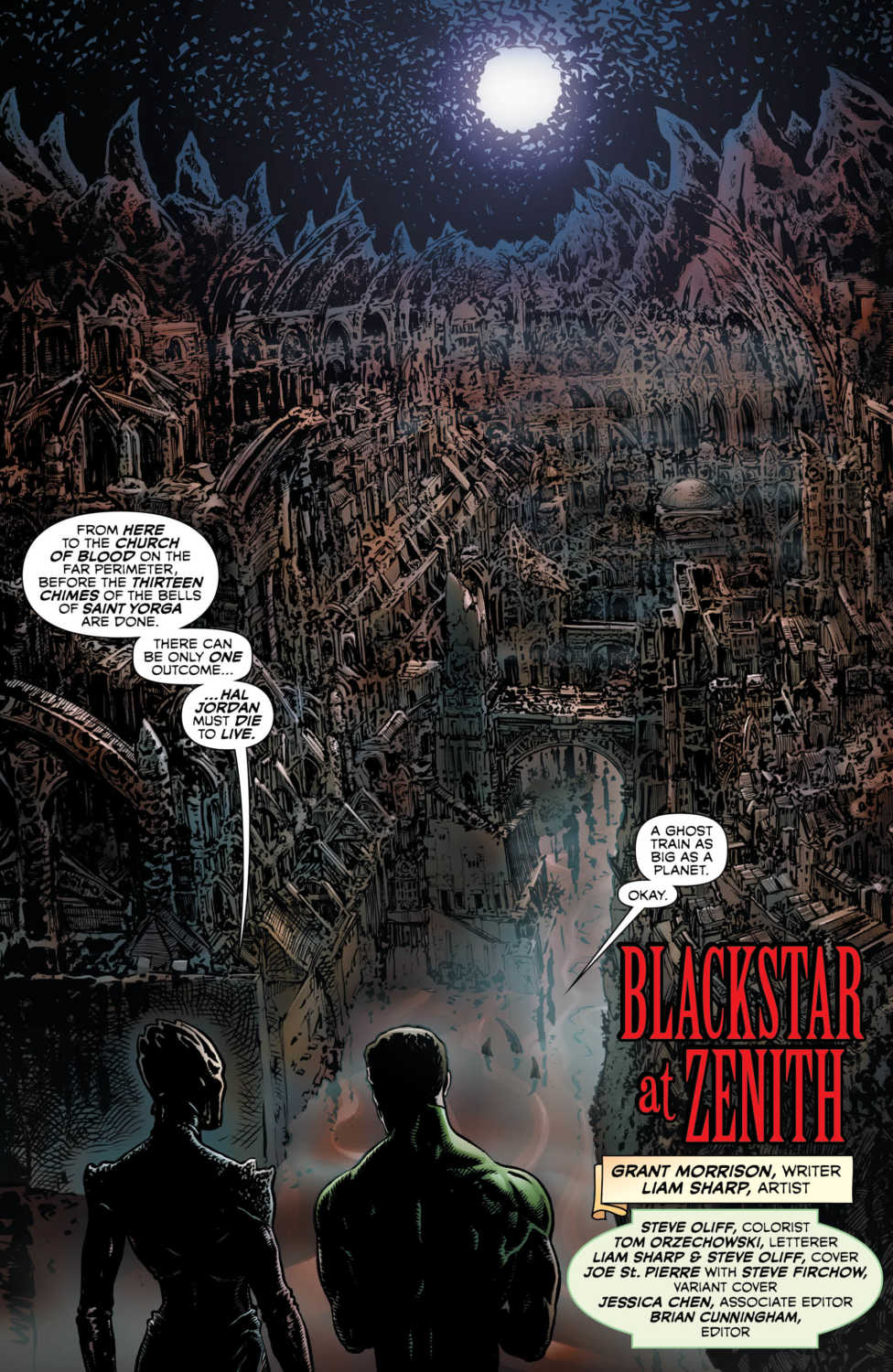 It seems Morrison is leading Hal down a path of no return in this issue, but not in the way one might think. The story’s danger lies less in the vampires attacking Hal and more in the psychological ramifications of each initiation task.

Hal learns Belzebeth’s initiation test was designed to serve as the antithesis to his most cherished qualities: individuality, confidence and willpower. These qualities are preventing him from passing the test, and Hal must learn to let go of his bravado and surrender to the Blackstar Collective. 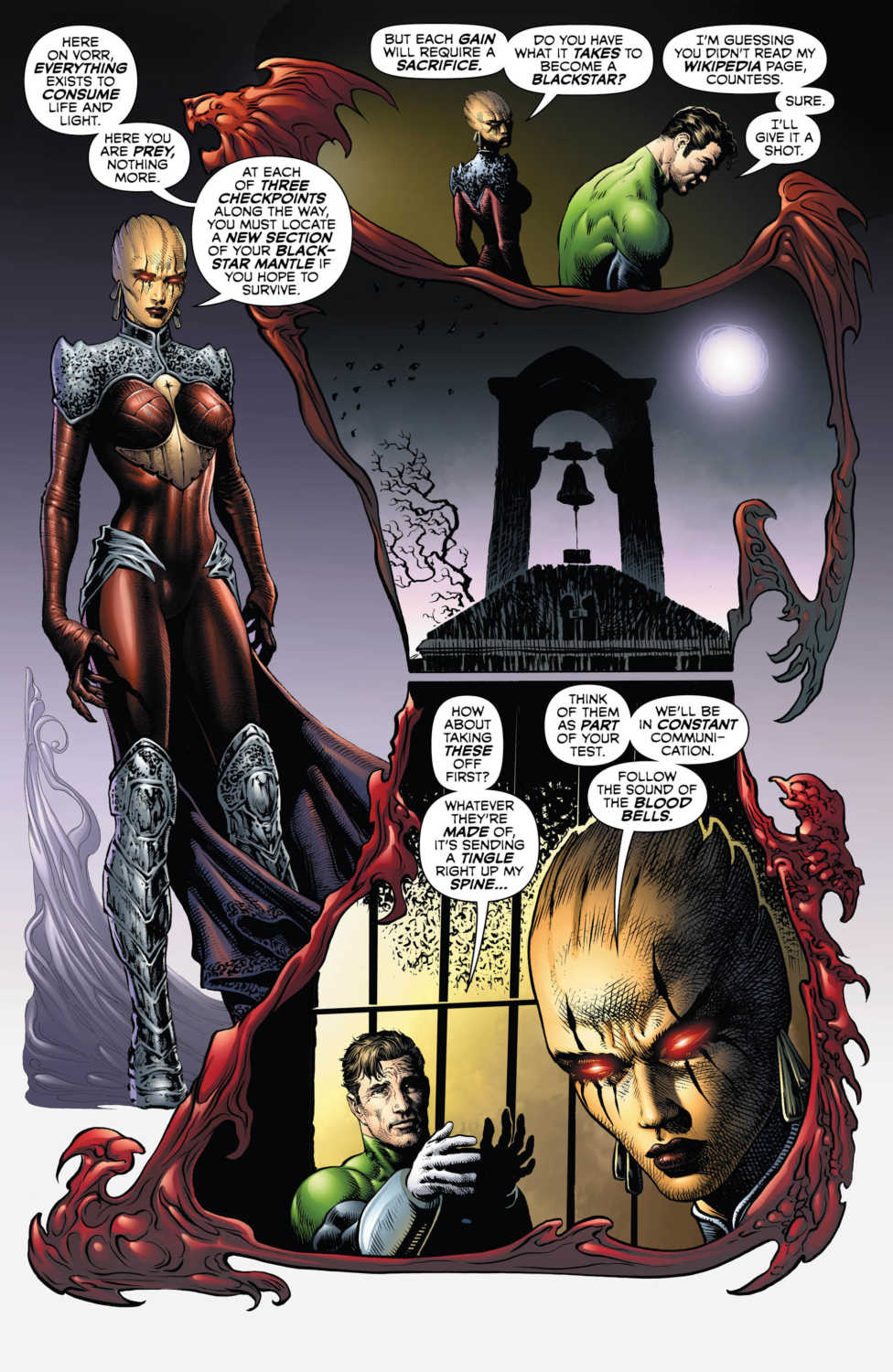 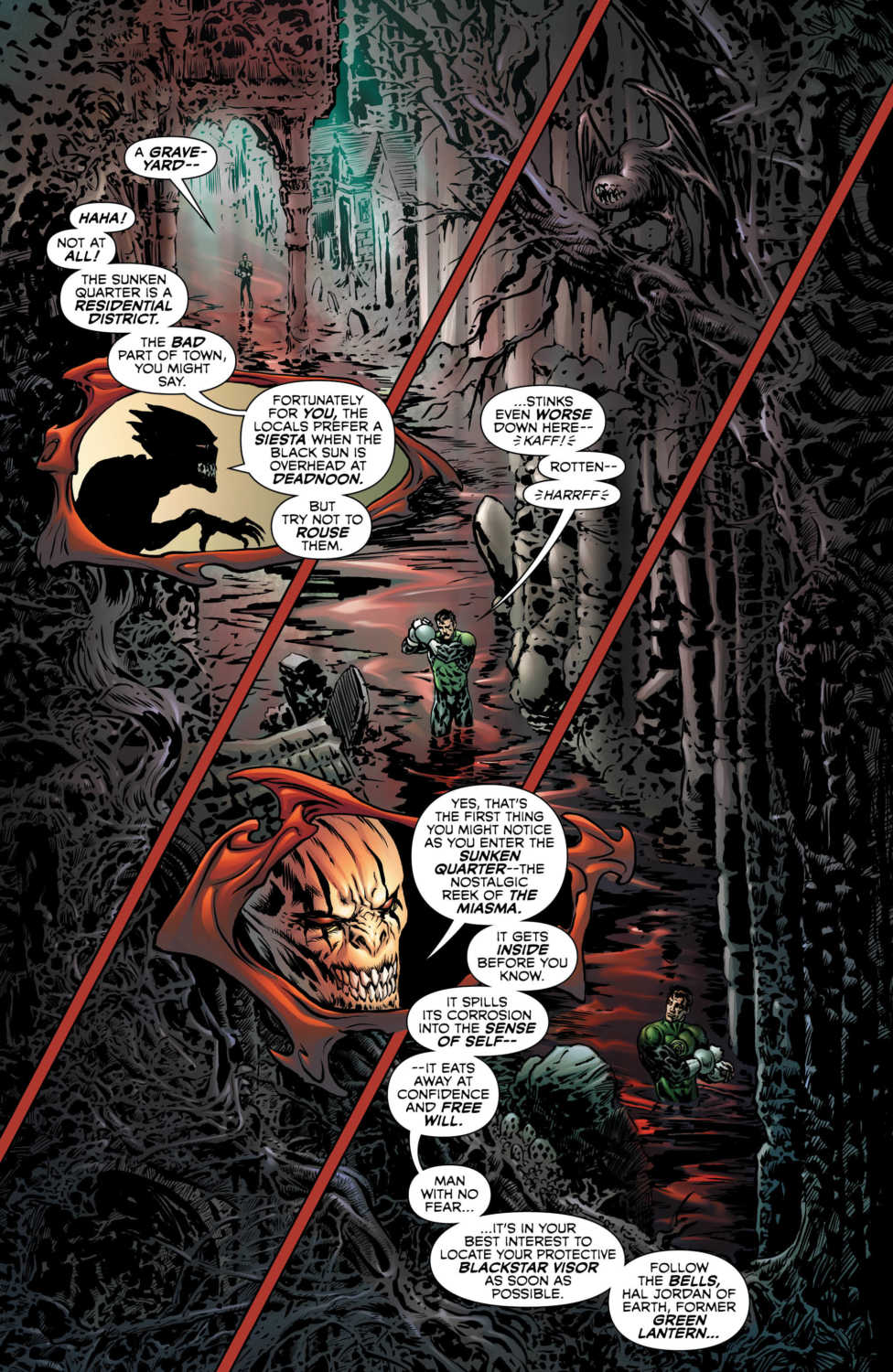 Morrison presents two intriguing versions of Hal in this issue. The classic version of Hal confronts his doubts and fears head-on with a smirk, while the new version, the Blackstar recruit Hal, begrudgingly surrenders his will to Belzebeth. It’s up to the reader to decide which version is truly “Hal” as he dives deeper into the Blackstar’s ranks.

Issue #5 is another visual treat for fans of Liam Sharp’s cosmic artwork. His penciling on the cover and throughout the issue brings to mind the complexity of life in all its glory and horror. It’s almost as if the reader feels the life in each illustration through Sharp’s use of sketched lines that pulse throughout the pages. Also, Steve Oliff’s coloring adds a clear distinction between Hal’s costume and the gray colors of Vorr, further emphasizing his disintegration from the Green Lanterns. Tom Orzechowski’s lettering gives character to the inhabitants of Vorr as Hal navigates his way through their neighborhood.

The variant cover more or less serves the purpose of highlighting Hal’s former Green Lantern glory. Joe St. Pierre and and Steve Firchow use bright greens to emphasize the light he’s leaving behind. The artists also use solid shading and straight lines to represent the straight-laced, uncompromising attitude Hal must also abandon. 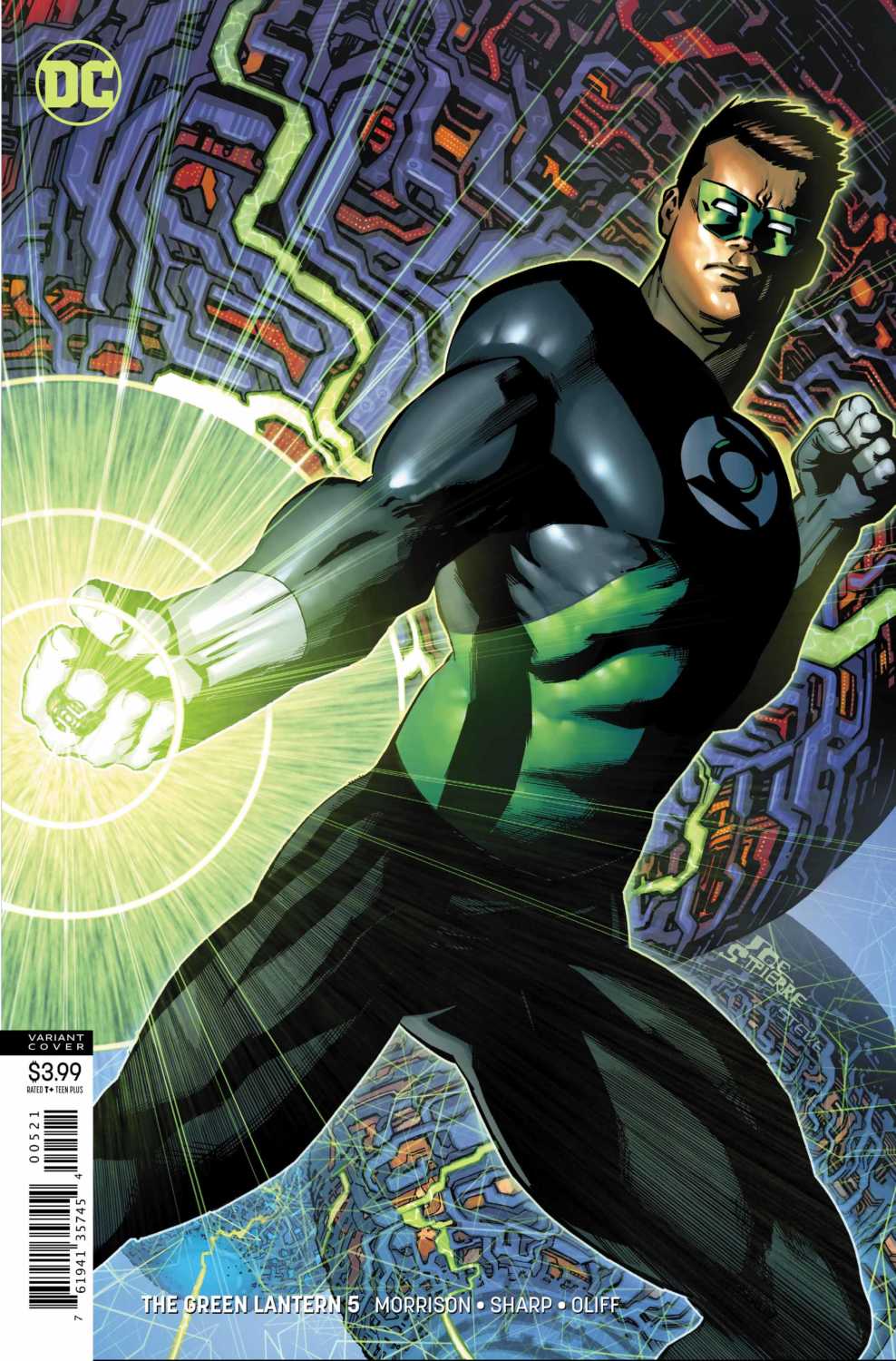 Hal undergoes a grueling self-discovery process that’s full of action. Regardless of motive, it’ll be interesting to see how this Blackstar ordeal impacts his psyche. Rest assured, the masterful writing of Morrison will make sure it’s mind-blowing.

What did you think of Hal’s Blackstar initiation? Let us know in the comments below!

Review: GREEN LANTERN #5 And The Fear Of Losing OneselfMorrison dives deep into Hal's psyche, using the Blackstar leader Belzebeth as the tool by which it's unraveled.