Review: GHOSTER is Ghostbusters with a Steampunk Boost

Ghoster – the new horror graphic novella – is created and written by Thom Burgess & Toby Meakins, with illustrations by Joe Becci.

Deep in the darkest corners of the web comes a book of gothic ghost hunters wielding steampunk weaponry battling malevolent spirits. Chock full of an immersive backstory and chilling artwork, Ghoster is the perfect book to read just in time for the Halloween season, and is available to download and devour for free. 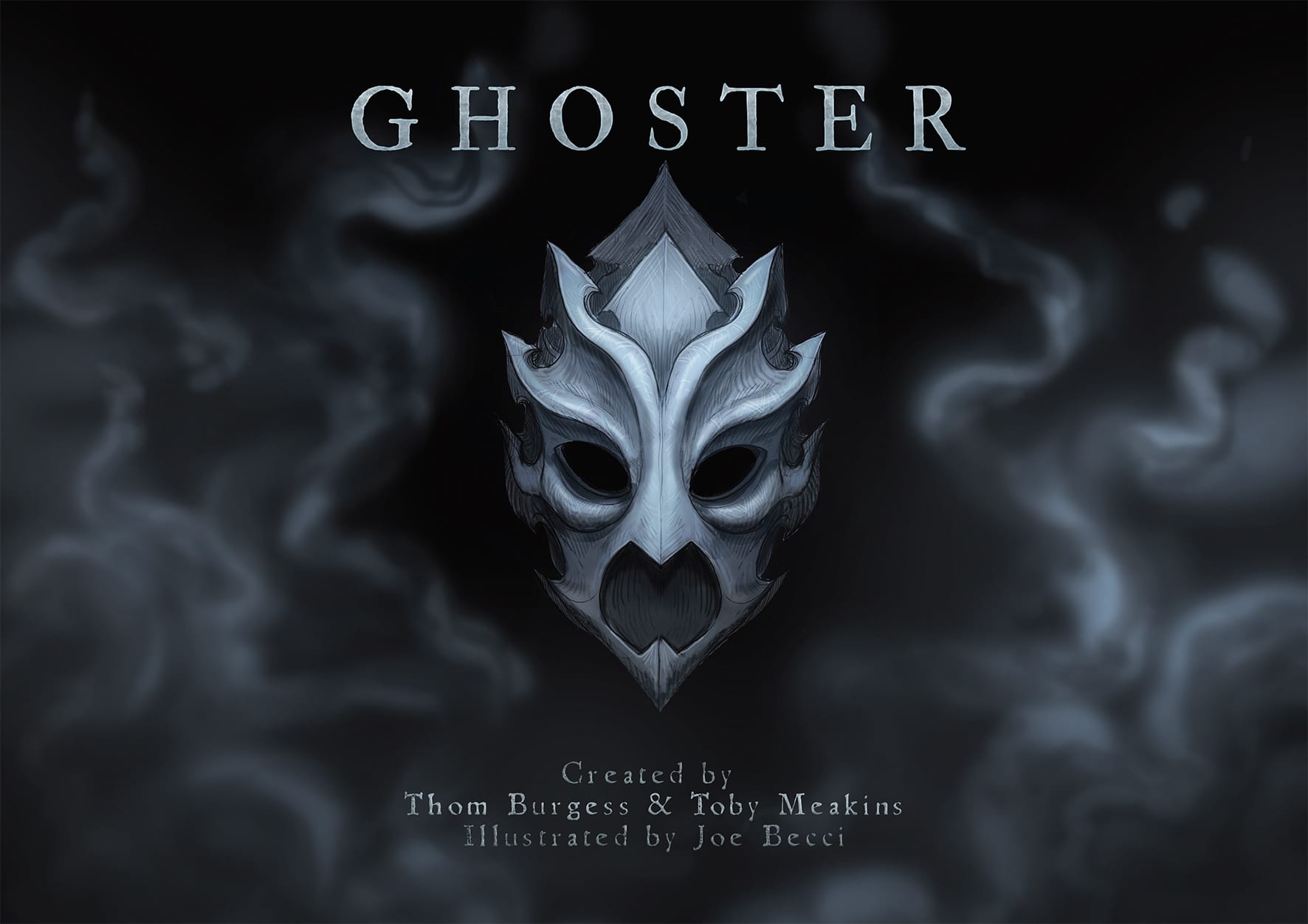 A young man attempts to survive The Gallowing, the deadly initiation into the secret Guild of Ghosters, five families of Malevolent hunters that have protected Britain from evil spirits for centuries. To complete his mission and join the ranks of his ancestors he must hunt down a Malevolent in the most haunted house in London or die trying.

Writers Thom Burgess and Toby Meakins have been perfecting the world of Ghoster for years, and it has certainly paid off. This initial offering is a superb introduction to its world and characters. In its brief 45 pages, readers are presented with this secret cabal of ghost hunters and the darkness they’ve been fighting for four and a half centuries. You get a sense of their rich history, which dates back to Queen Elizabeth I. What’s even more impressive is the science and technology the writers’ created that allows the Guild of Ghosters to enter the plain of the Malevolents and fight them. You will be astounded by the world they’ve created.

There is something for all genre fans to enjoy in Ghoster. They’ve combined the spooks and spectres for fans of Supernatural with the action and weaponry of Assassin’s Creed. And it seems they’ve only scratched the surface of this fantastical story. Burgess and Meakins set up a world with heroes spread across the globe, and the cataclysmic event that will bring them all together. It’s an exciting read, and even more so to wonder what will happen next. 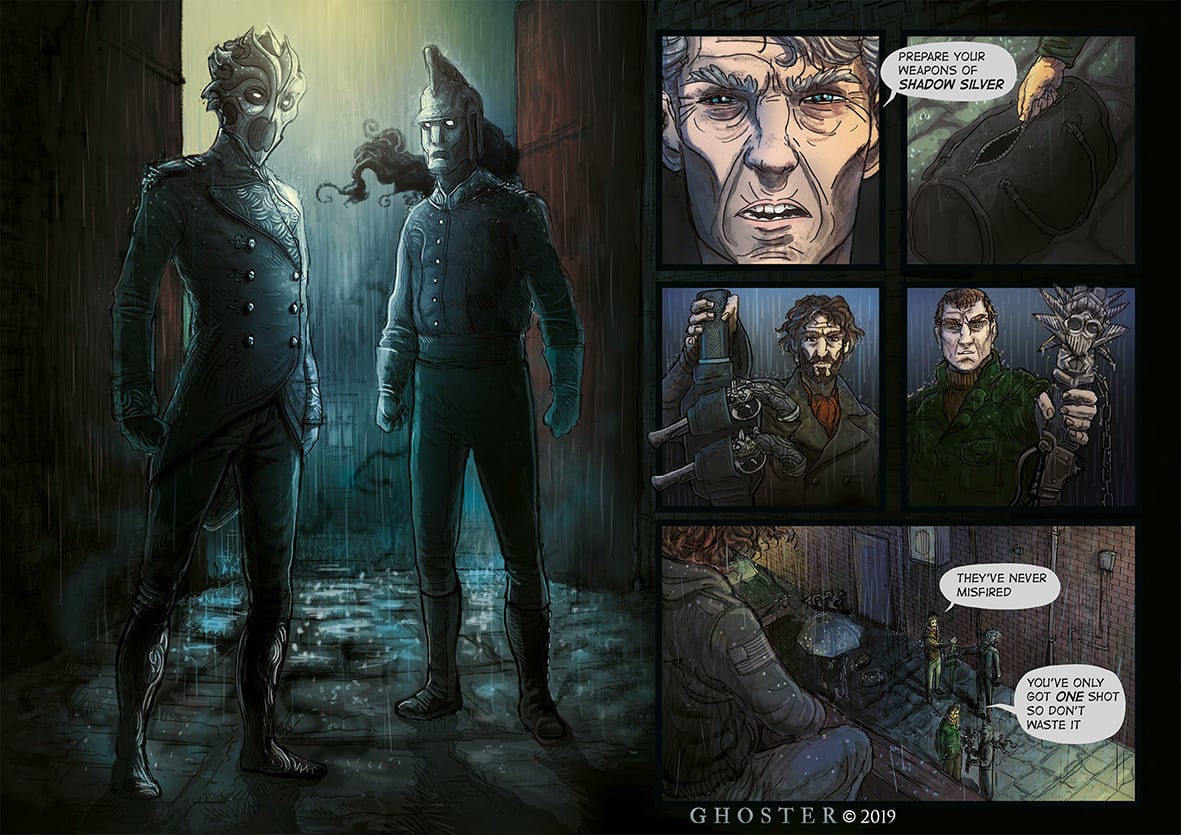 The talented Joe Becci adds spine-chilling and breathtaking artwork to the macabre world of Ghoster. The modern English setting is already dark and gloomy; its olden architecture giving it an air of otherworldliness. Becci furthers to the ethereal atmosphere by adding in a supernatural smog and a color palette of blue and grey once the Ghosters cross through the veil to the realm of evil spirits.

The character work is also worth mentioning. The Malevolents are monstrous and utterly terrifying. The Ghosters’ armor has a steampunk flair about it, each unique to the families of the guild. Overall, the artwork and color palette perfectly rounds out this horror action graphic book, setting its shadowy tone from the very first panel, and not wavering once.

Ghoster is such a great book, filled with nightmarish visuals and rich worldbuilding. It’s a fun and spooky read, perfect for this time of the year. 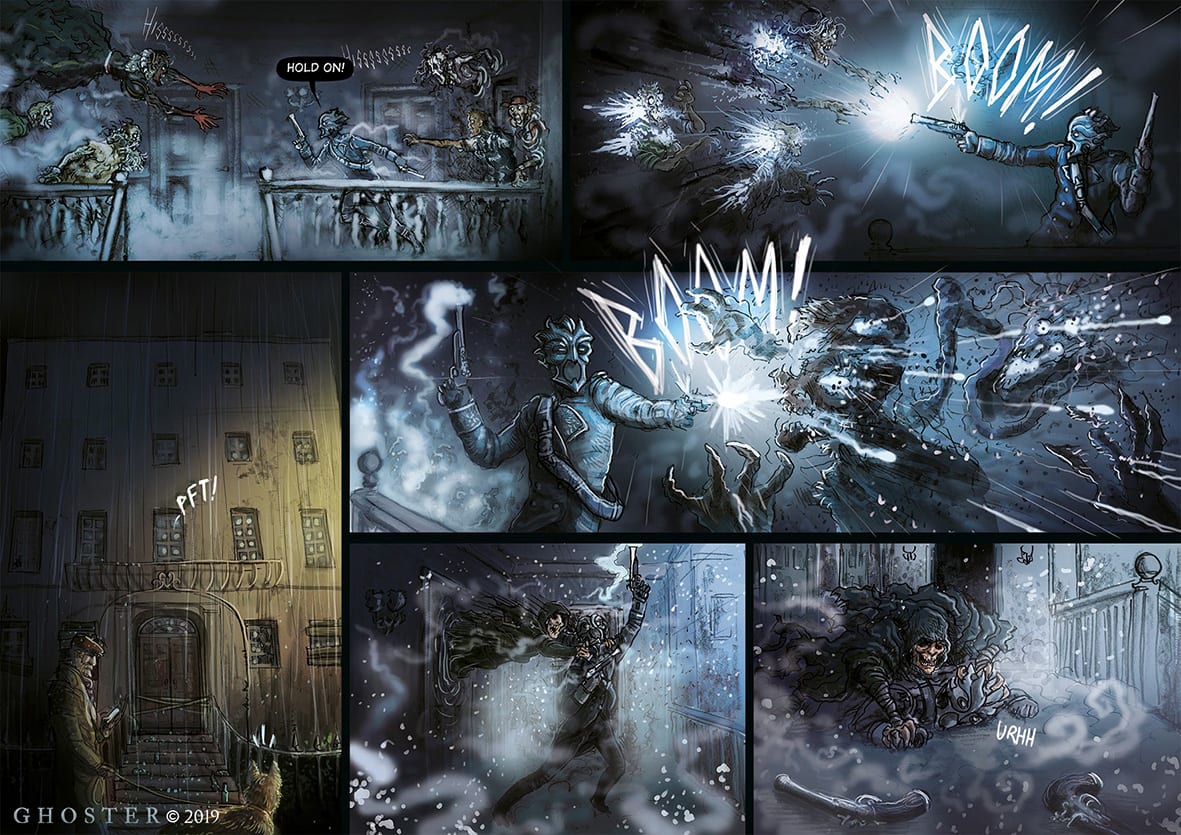 Ghoster is the perfect book to read just in time for the Halloween season, and is available to download and devour for free. Review: GHOSTER is Ghostbusters with a Steampunk Boost