Review: Get The Hell Out of Town in RED BORDER #1

The contentious topic of the U.S. border is given a compelling twist in Jason Starr and Will Conrad’s “Red Border” #1. This issue offers a new look at the people who are forced to make the run from Juarez while also crafting an intense and unpredictable comic.

“When a young, middle-class Mexican couple targeted for death by the Juarez Cartel flee across the border into Texas, they wander into a house of horrors beyond their wildest imagination. Rescued by a mysterious local who takes them to the safety of his family’s ranch, the couple soon realize their hosts have more than just skeletons in their closet, and the army of assassins on their trail might be the least of their problems.” 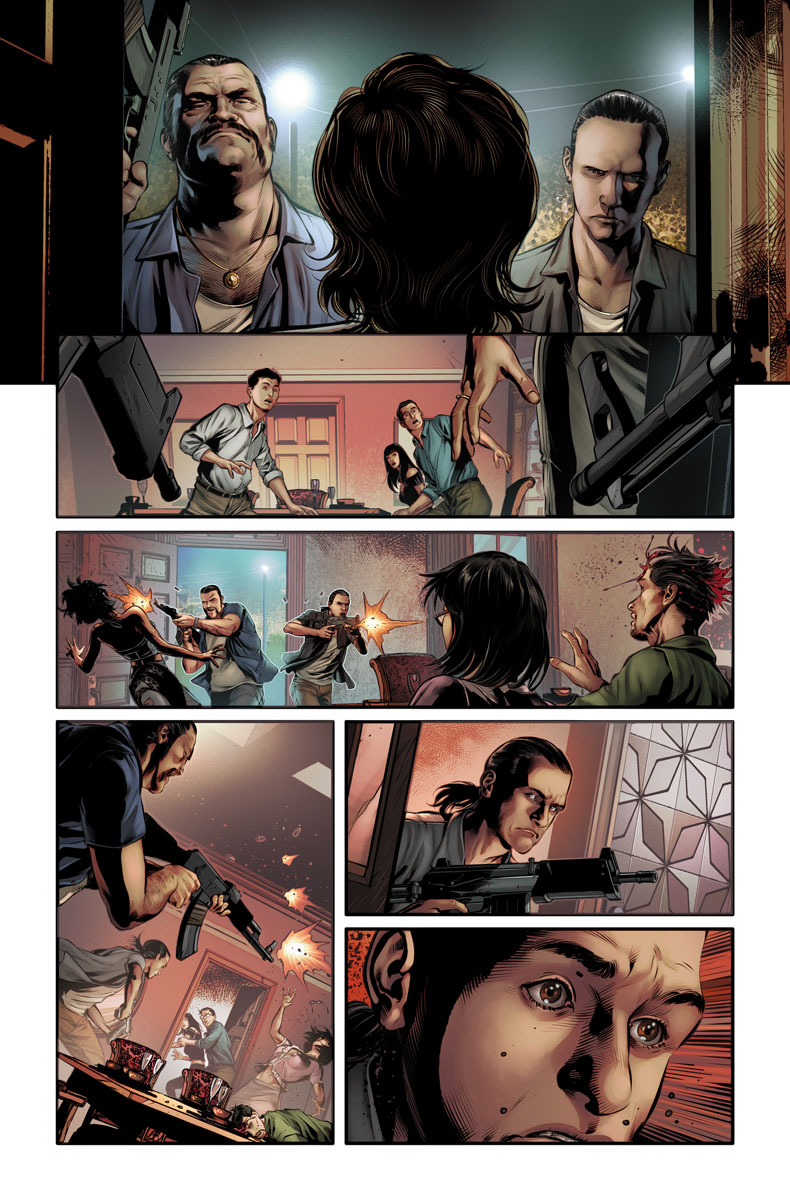 Jason Starr‘s script is a smooth balance of naturalistic dialogue and tightly paced action. There is a believable mix of solid conversational dialogue and, of course, complete panic. There’s a cinematic approach to the presentation of characters and directing of panels that makes it easy to engage with as an audience. The most interesting choice of this issue however, is the kind of characters that Starr makes his protagonists. When most American audience members have a picture in mind of someone trying to cross the Southern border, it’s typically a harmful and inaccurate stereotype; a caricature of real Mexican people. “Red Border” however chooses to use a Mexican couple that is almost indistinguishable from typical middle-class Americans. Now, there is a potential can of worms that can be opened from choosing this type of milquetoast character archetype in order to make the story easier to interface with for most readers. This is an issue for another article. As it stands solely as a creation of action/horror fiction, this comic is an impressive feat of pacing and character writing. 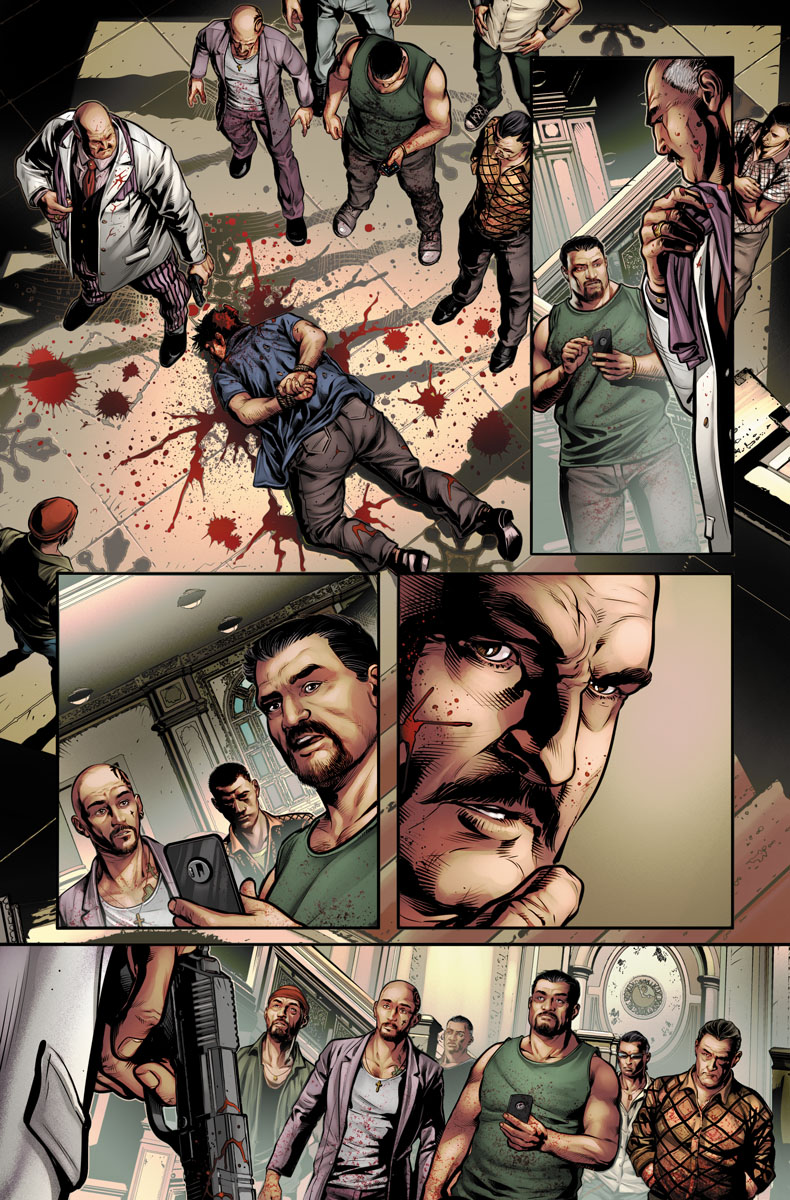 Much of the cinematic styling mentioned earlier actually comes from the phenomenal artwork from Will Conrad and Ivan Nunes. Conrad’s pencils create an almost photographic representation of a variety of different characters with varying features and body types. The enviornmental and accessory detail as well is near unmatched in any comic from recent memory, and it’s clear he has gone through great pains to create a realistic world for this comic to take place in. His style grounds the story in a visual sense that is easy for the reader to become engrossed with, as if they were watching an action thriller. The colors from Ivan Nunes further this artistic agenda with quiet, realistic tones and convincing layers of blood and filth to bring this gruesome tale to life. Everything from the reds, browns and faded greens of the desert to the flashy whites and purples of gangster’s opulent clothing is given nuance in terms of color and shadow. This comic is a prime example of writing and art meeting to perfectly craft a specific storytelling style. 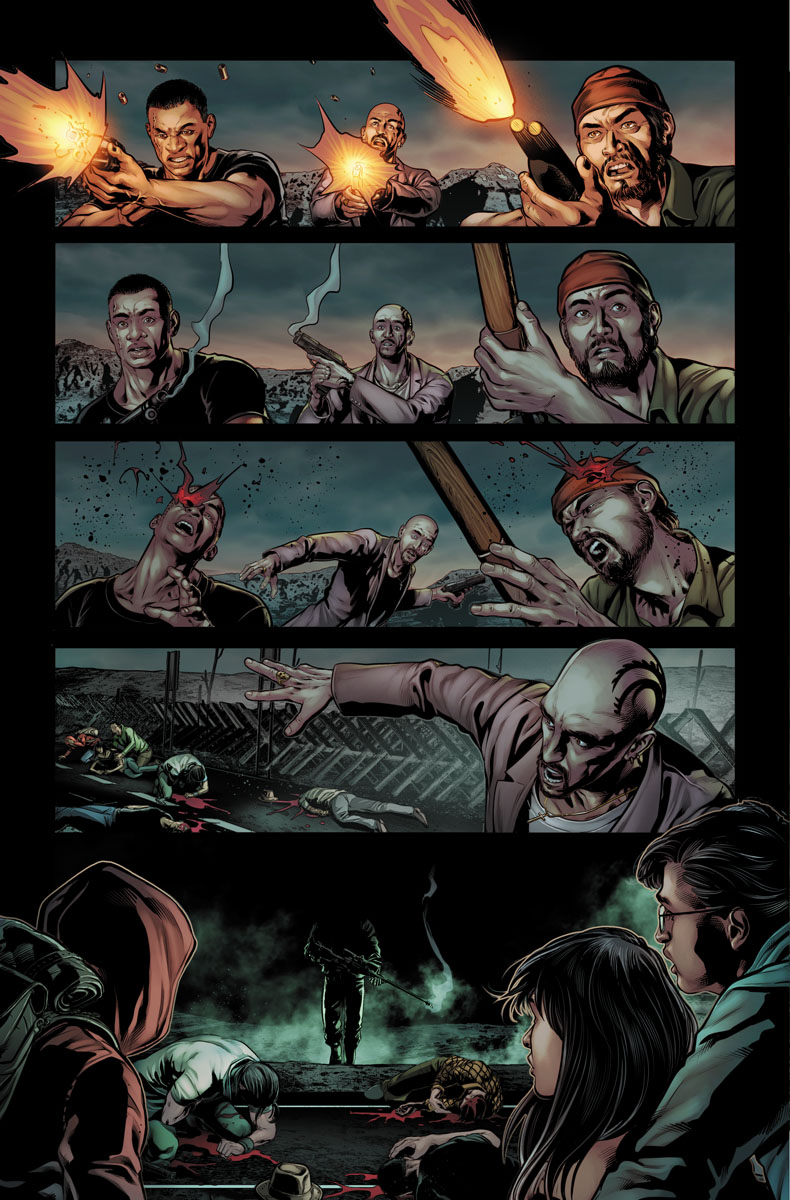 “Red Border” #1 is a thrilling and intriguing start to a series with a premise that requires some thoughtful writing. Writer Jason Starr makes an interesting choice with his protagonists and crafts a mix of stellar dialogue and tightly paced scenes. The artwork from Will Conrad and Ivan Nunes takes a cinematic approach to comic storytelling and becomes one of the best looking books in recent memory. If you’re up for an unpredictable thrill, be sure to grab “Red Border” #1 when it hits stands on 3/18!

Review: Get The Hell Out of Town in RED BORDER #1A tense and action-packed first issue with great dialogue and stellar artwork