Marvel Comics releases the second issue of the Empyre tie-in series Empyre: X-Men #2 August 05. Writers Gerry Duggan, Ben Percy, and Leah Williams are joined by artist Lucas Werneck, colorist Nolan Woodard, and letterer VC’s Clayton Cowles as they continue to explore the multi-sided conflict between the X-Men, Hordeculture, the Cotati, and a bunch of mutant zombies.

The writers do a good job of making this a really crazy, fun issue! It’s big, bombastic, and all over the place, mostly due to the multiple factions fighting on Genosha, but that’s part of its charm. While it looked like the zombies might become a bigger threat than the Cotati in issue #1, the Cotati reassert themselves and escalate their threat in this issue.

Magik continues to demonstrate what a badass she is across all of the X-books as she takes center stage in this issue, asserting her place as the Krakoan war captain and summoning a number of psychics to Genosha by issue’s end. One wonders if this will lead to a conflict with Magneto, who was very specific with Warren that their squad was to remain small. Could this possibly lead to Magneto’s return to Genosha by the series’ end and a reunion between him and Wanda Maximoff (whose fate is still unknown)?

One of more creative sequences in this issue is Black Tom’s appearance on Angel’s shoulder. Werneck does a good job not only drawing the assembly of Tom’s avatar, and the comedic subtlety of the scene is captured well. 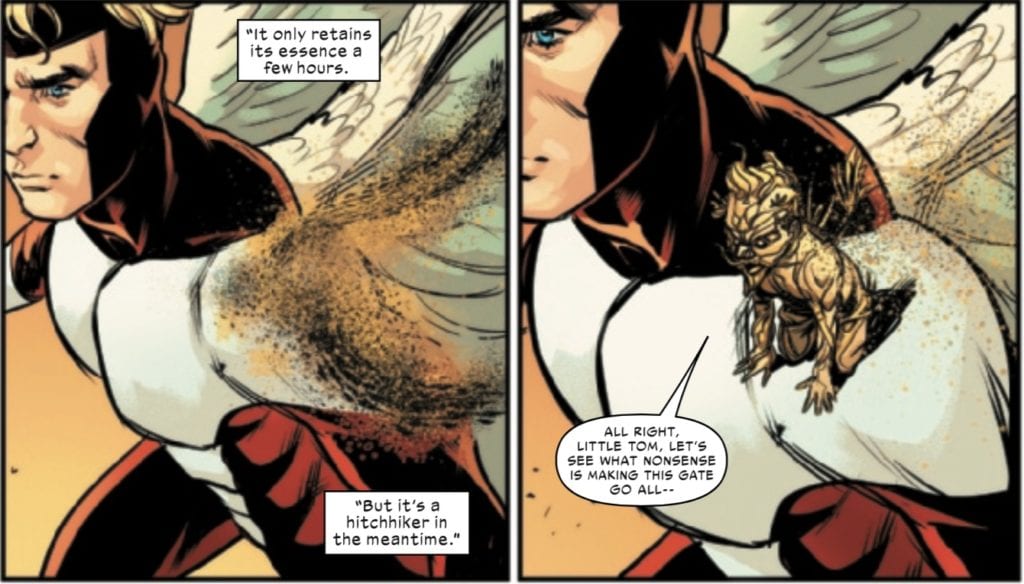 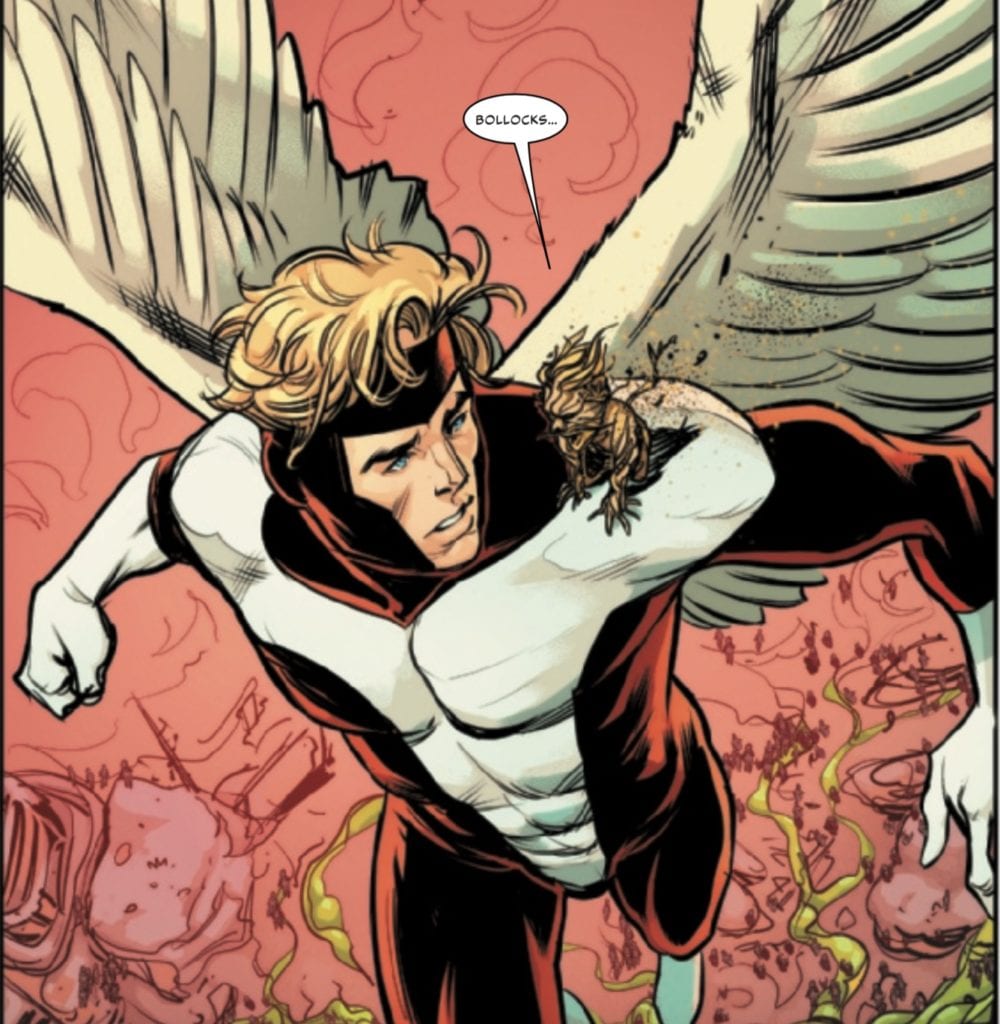 The combination of Werneck’s design for Black Tom and Warren’s look of surprise and confusion might make Tom’s involvement the standout part of what is, overall, a very humorous, quippy issue.

Woodard, of course, deserves credit not only for making this a beautiful issue, but for some of the effects that make this issue work so well. In the above scene, he utilizes the blacks and browns of Black Tom’s avatar to maximize the effect of his self-assembly. The black and brown is well done, with the colors lacking any line work, seeming to have just been speckled on the page.

Woodard’s colors also stand out when he draws Magik’s armor, in particular the shiny, metallic, supernatural look (which I think is part of the effect of Warren being on the other side of an energy barrier). 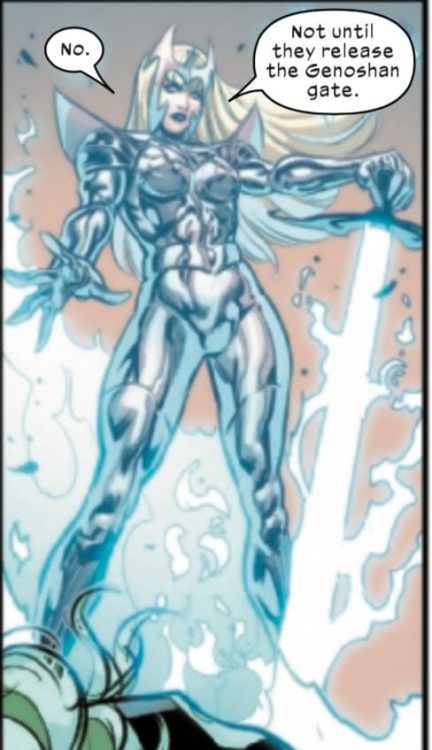 Either way, it comes on the end of Magik’s escalating badassery throughout this issue.

There are plenty of opportunities for Cowles’s letters to shine in this issue. I’m used to their usually being at least one prose page in any of the X-titles, a trend this issue ignores (probably a good idea in a visual medium). At no point does the text overwhelm the page, and the lettering serves as the perfect complement to what is an action-filled story.

One neat bit of lettering on Cowles’s part is his dialogue for Multiple Man. 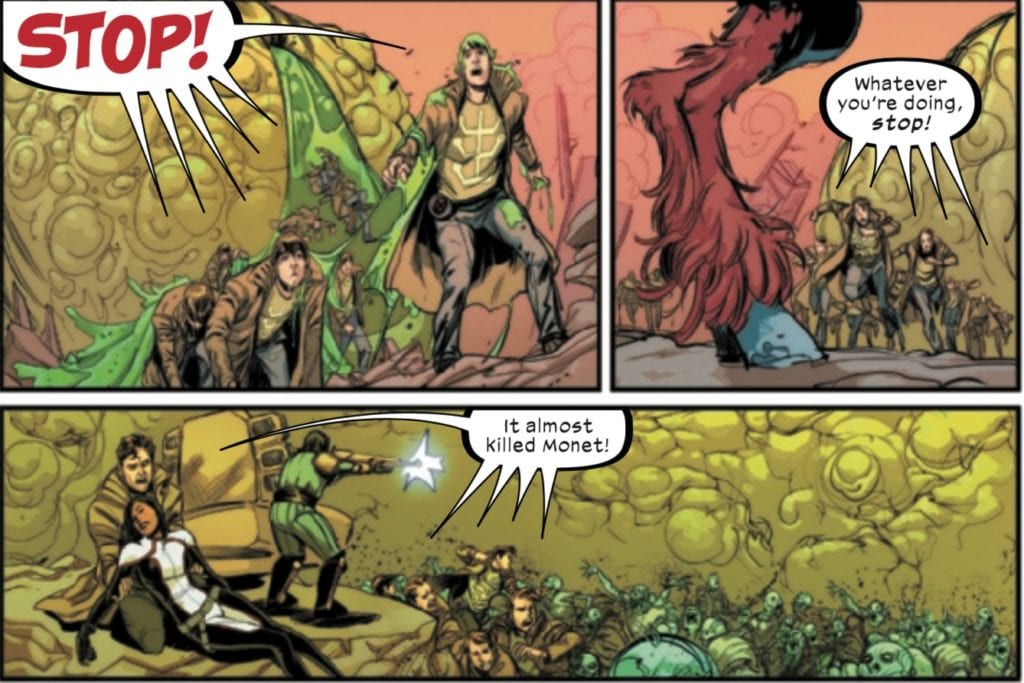 Portraying the simultaneous voices of Madrox’s copies is a nice touch and a nice accentuation of his powers, in an issue where the character serves no real function other than to be a background member of the team.

Empyre: X-Men #2 is a fun, action-filled issue that has a lot going on, and for the most part, all of the different factions in this issue are balanced well. The Cotati threat escalates, as does the X-Men’s response to the crisis on Genosha. The Scarlet Witch’s fate remains unknown, but hopefully will be resolved by the end of the series, but Magik begins to suspect that someone, quote, “took a big old magical $@#% here.” It will be interesting to see if this affects the characters’ interactions in other books like Strange Academy (probably not).

What did you think of Empyre: X-Men #2? Tell us in the comments below!

Empyre: X-Men #2 escalates the conflict on Genosha between the X-Men, the Cotati, Hordeculture, and a bunch of hungry mutant zombies!Review: EMPYRE: X-MEN #2 - Magik is a Bad@$$!