Review: EAT THE RICH #2 – Healthcare, For An Arm And A Leg

Writer Sarah Gailey and artist Pius Bak return with another cutting chapter of satirical horror in Eat The Rich #2. Along with colors by Roman Titov and letters from Cardinal Rae, this issue digs into the heart of this story’s silly yet smart premise. With a painfully relevant message and great character art, this is shaping up to be one of the best class-conscious comics of the current era.

“Is Joey willing to pay with her life to uncover the gruesome secrets behind Crestfall
Bluffs? Joey is beyond disturbed by what she has just witnessed, but when she confides
in her boyfriend Astor, his reassurance about his family’s weird rituals and traditions
only fuels her suspicions. As she digs further, what she finds produces more questions
and danger than answers!” 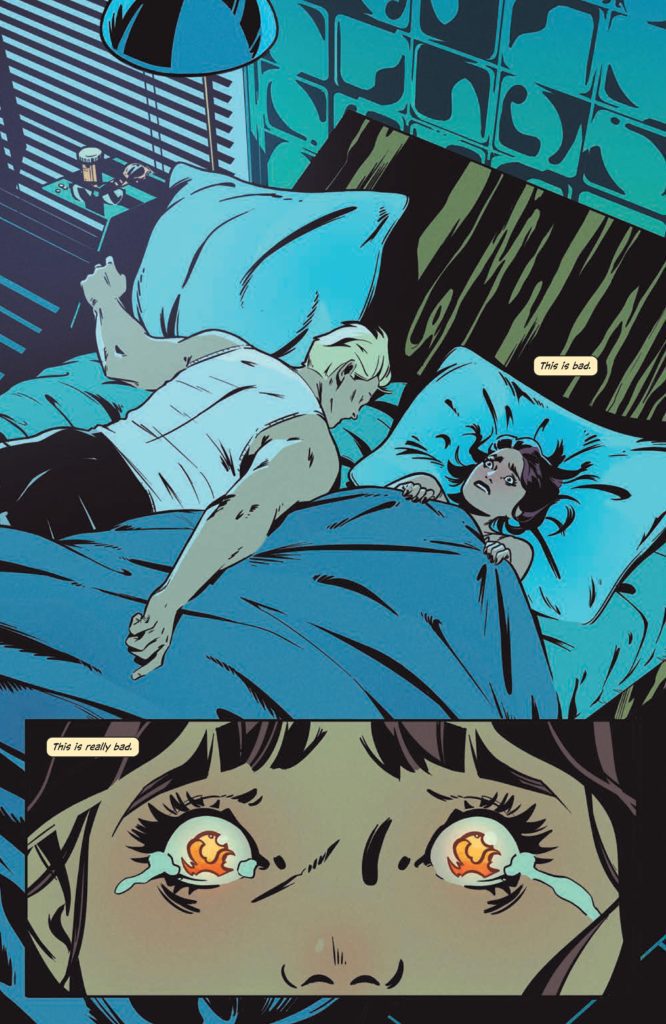 What Sarah Gailey’s script for Eat The Rich #2 lacks in outright suspense it makes up for in twisted satire. Whereas the first issue offered a kind of Boots Riley-esque attitude, this one is more straight-forward thriller but with searing dialogue. The real heart of this comic comes from the aftermath of Joey’s discovery and a certain conversation she has in its wake. I obviously won’t talk spoilers, but this is the kind of brutally effective topical writing that makes a great socio-political comic. It’s satire at it’s most effective, when you honestly understand the victim’s decision to undergo her plight, then are horrified that you understand exactly why she would. It’s both hilarious and deeply, deeply disconcerting.

Gailey does fantastic work in creating relatable personal issues for each character. Despite the gruesome B-movie outer concept, Gailey put together a cast that makes you give a damn about what is happening. That’s how good horror works, of course. This being said I felt a couple of lines felt a bit awkward and out of place. Given their tone though, they could make sense in the story over the long run. Regardless, this is a wonderfully scripted comic with Gailey flexing their cleverness once more. 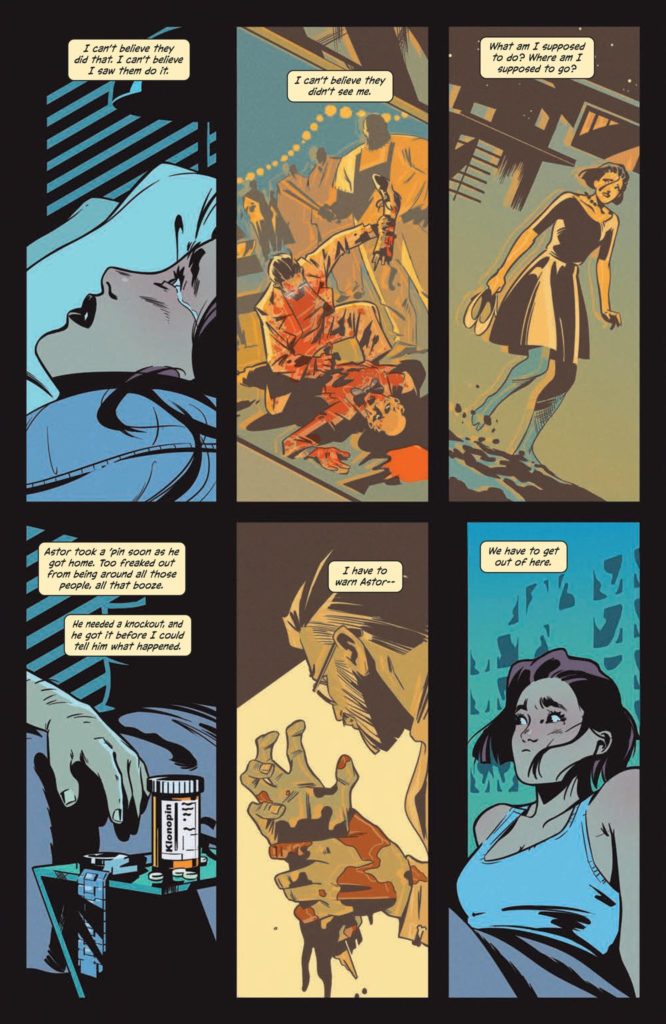 The visuals of Eat The Rich #3 are so full of personality and life thanks to Pius Bak’s art. His thin linework creates careful and detailed characterization into every moment on each panel. Joey’s nervous terror in the opening pages is palpable in the dark, claustrophobic-feeling room she and her boyfriend are in. Bak’s sense of scale when designing panels and rooms within panels is much of what creates tension within this comic. Just on the first few pages the shadows of Joey and Astor’s room seem to creep up on the frightened protagonist. However, when the panel shifts away from just Joey and opens up to include Astor, they temporarily retreat.

So much of the threat in this comic comes across as the house conspiring against them. On a lighter note, Bak’s facial animations are wonderfully spot-on. Watching Joey and whoever she’s speaking with exchange expressions and attitudes makes you feel like you’re in the room while you’re reading.

Roman Titov’s colors are a massive component of why this comic’s art style works so well. He utilizes a sort of washed out, vaguely pop-art color scheme that is semi-common among indie comics today. This isn’t a dig by any means, though. The almost flat colors add to the tongue-in-cheek satirical tone in a way, while also still allowing for shadows and darkness to highlight the comic’s horror aspects. The lettering from Cardinal Rae is simple and mostly straightforward but still mixes things up a bit. The clean modern font shifts and becomes bouncy and unclear during one scene to demonstrate how tired a character is at one point. This, and the other moments of changing bolds and italics, all work very well in establishing a reading experience. This is a stellar looking comic that matches its subject matter brilliantly well. 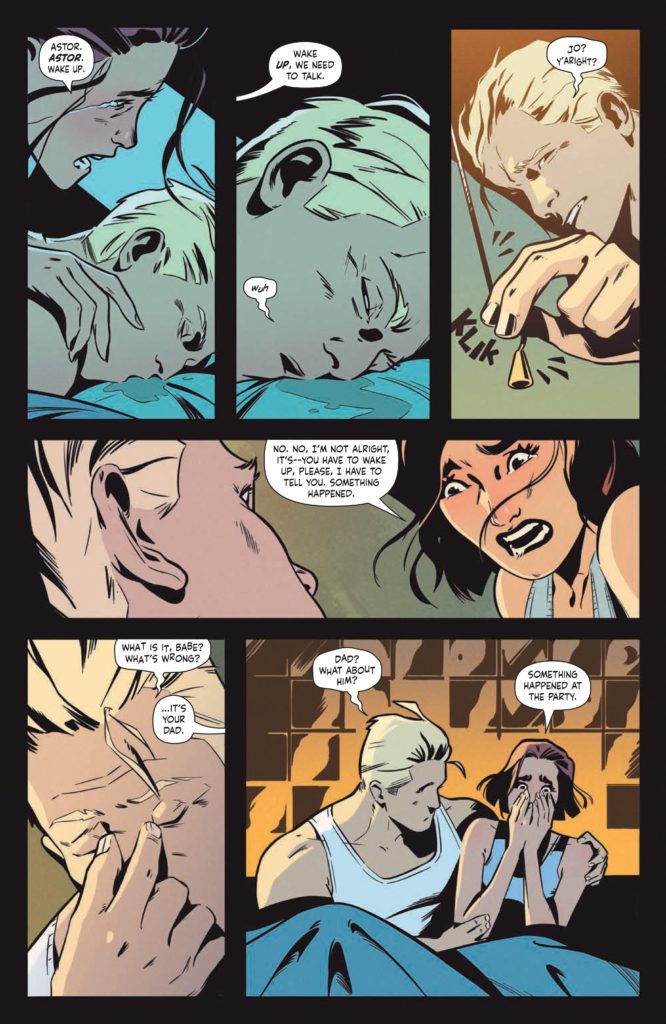 Eat The Rich #2 is admittedly a less outright exciting issue than its predecessor, but it makes up for it with searing and saddening relevant satire. Sarah Gailey’s script balances sharp character focus with hilarious and depressing socio-political commentary. The visuals from Pius Bak and Roman Titov are thoughtfully directed and tonally spot-on. This is shaping up to be one of the best comic of its genre. Be sure to grab this issue when it hits shelves on 9/22!

Eat The Rich #2 continues to impress with a sharp and powerful look at a very real problem through the lens of absurd horror.Review: EAT THE RICH #2 - Healthcare, For An Arm And A Leg