The holidays arrive in Gotham in Detective Comics #1018, out this week from DC Comics. But despite the festivities, the discovery of a brutal, ritualistic mass murder means the city is set to have anything but a silent night.

It’s up to Batman to crack the case before the next sacrifice takes place. However, the explanation may be even stranger than the crime. 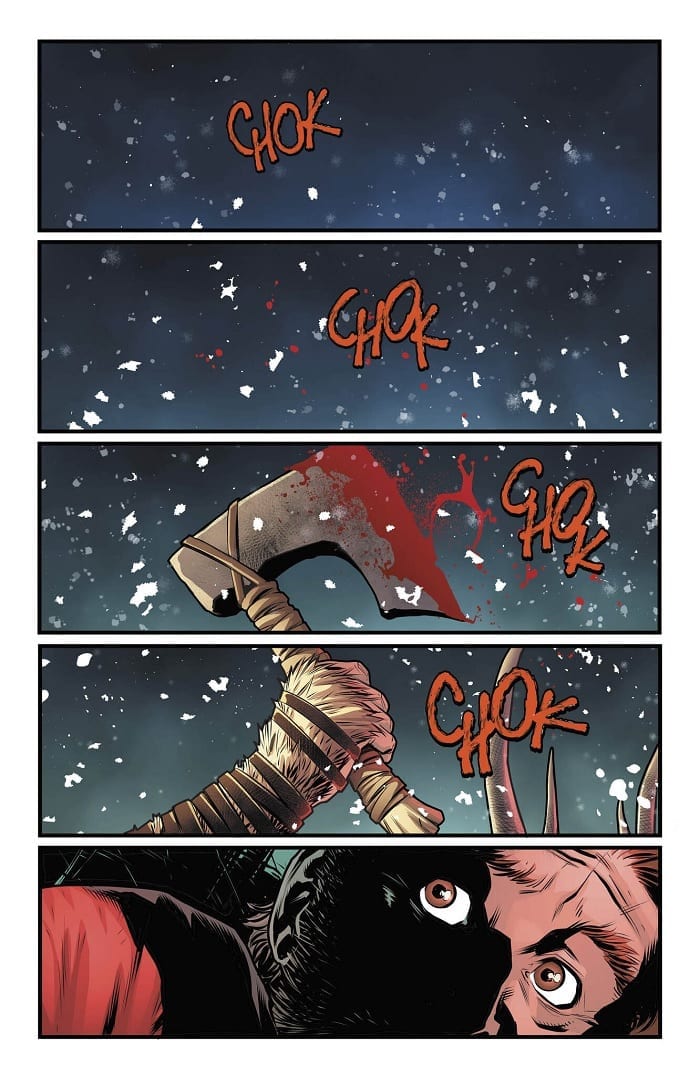 The story’s setup catches the reader from the first page. The book seems to introduce us several hundred years before the modern day, suggesting Gotham was once just a tiny, pre-Christian viking outpost. This prologue serves to provide flavor for a story, though it’s significance doesn’t become clear until the book’s end.

Detective Comics #1018 is a well-paced story, keeping the reader locked into the action on the page. Truth be told, this may be some of Tomasi’s best work yet on the series. It’s especially a treat for readers who more enjoy the “detective” aspect of Batman’s persona, rather than the superheroics.

The tone and premise are reminiscent of the classic Batman graphic novel The Long Halloween in some regards. The storytelling here is less action-centric, with Tomasi opting instead for more of a stripped-down sleuth narrative. We see Batman is called to the scene of a macabre multiple homicide, but each twist in the story just raises more questions, heightening the tension and mystery.

This seems to be the first Detective Comics story to take place following the events of Batman #77. Bruce is alone in Wayne Manor, isolated as the snow falls. Although it’s not a dominant theme, we see Bruce wrestle with his loss and trauma, which lends pathos and added dimension to the story. It’s especially prescient that Detective Comics #1018 takes place during the holidays. This allows Tomasi to really highlight Bruce’s loneliness. 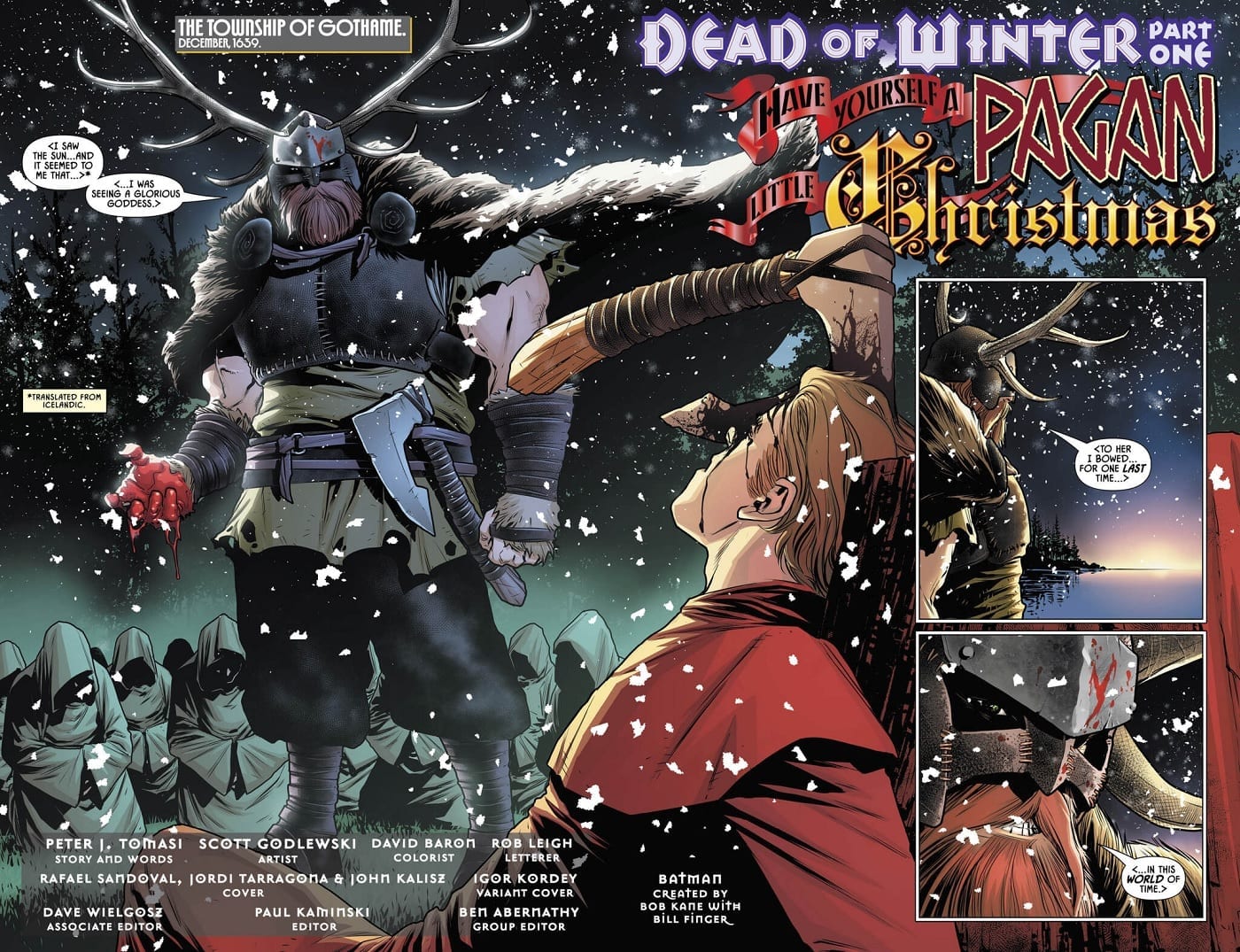 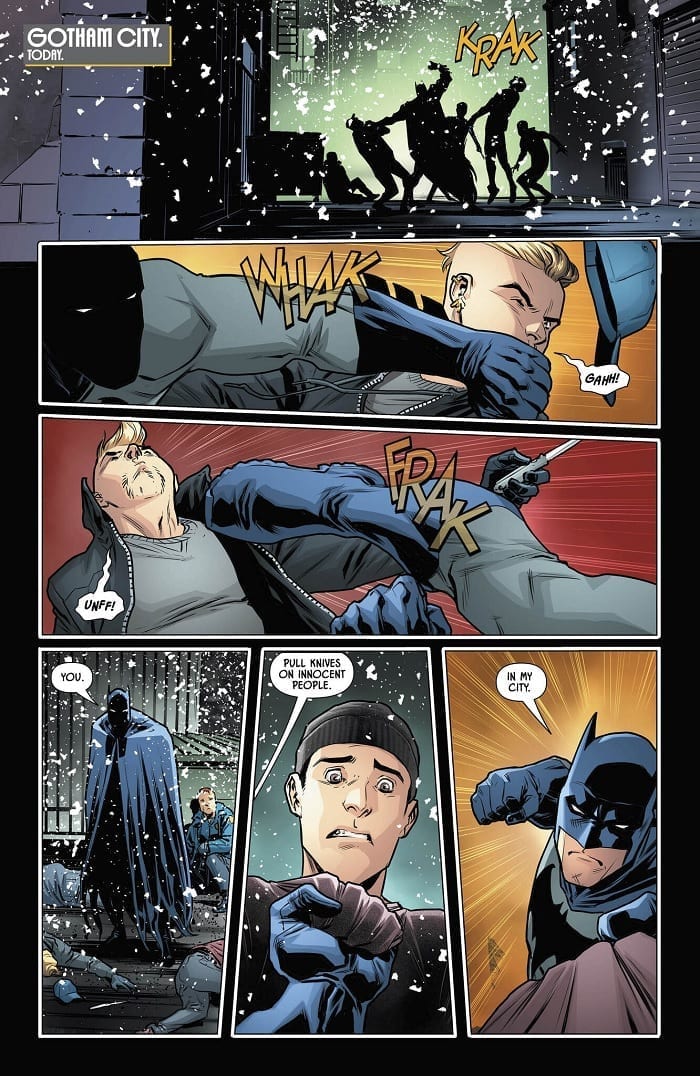 Artist Scott Godlewski provides illustrations for Detective Comics #1018. By and large, the artist does a great job of capturing the tone of story. Godlewski conveys the frosty, wintery atmosphere of the setting well, grounding us in the season. The level of detail employed in the backgrounds serves this effect, too, making the reader feel transported to Gotham.

One of the most notable elements at play is the expressiveness of the character designs. Godlewski leans slightly into a cartoonish style, but in doing so, lends the work a much more expressive feel.

The book has a sense of aesthetic cohesion, with the snow falling throughout, while the use of similar visual motifs in terms of layout helps as well. The visuals mesh well with the tone of the writing, giving the book a darker and shadowy, yet nonetheless vibrant look. Detective Comics #1018 is a visually-striking book, all things considered.

Of course, the colors from David Baron help to sell the immersion and dynamism. As usual, Baron’s work is on-point, with a dominant greenish hue contrasting against icy blues and stony grays. It’s moody and tone-appropriate. 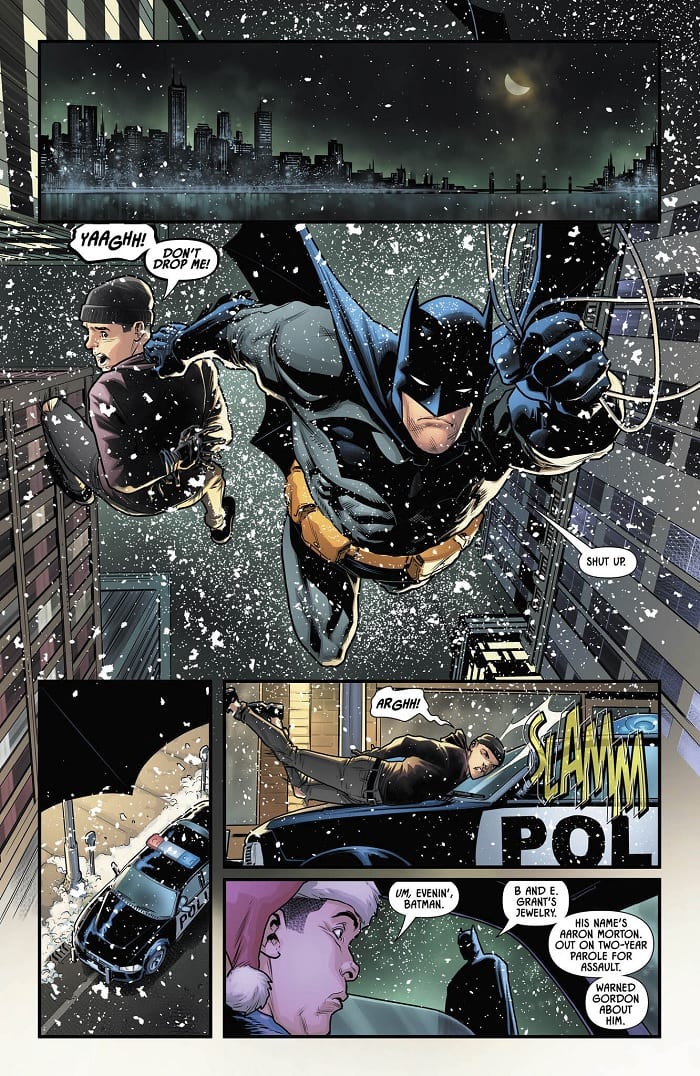 Detective Comics #1018 is a winner. It’s compelling and interesting visual storytelling with a notably darker edge to the narrative. This issue is definitely worth picking up.