Mr. Freeze finally has his beloved wife back by his side. But, as we see in Detective Comics #1015, out this week from DC Comics, something’s a little…off…about the revived Nora.

The Frieses terrorize the city while Bruce, Alfred, and Lucius rush to find a way to rescue Freeze’s victims. Over the course of their crime spree, though, Victor begins to notice a change Nora’s demeanor. She doesn’t merely engage in criminal acts for profit…she seems to enjoy hurting people. 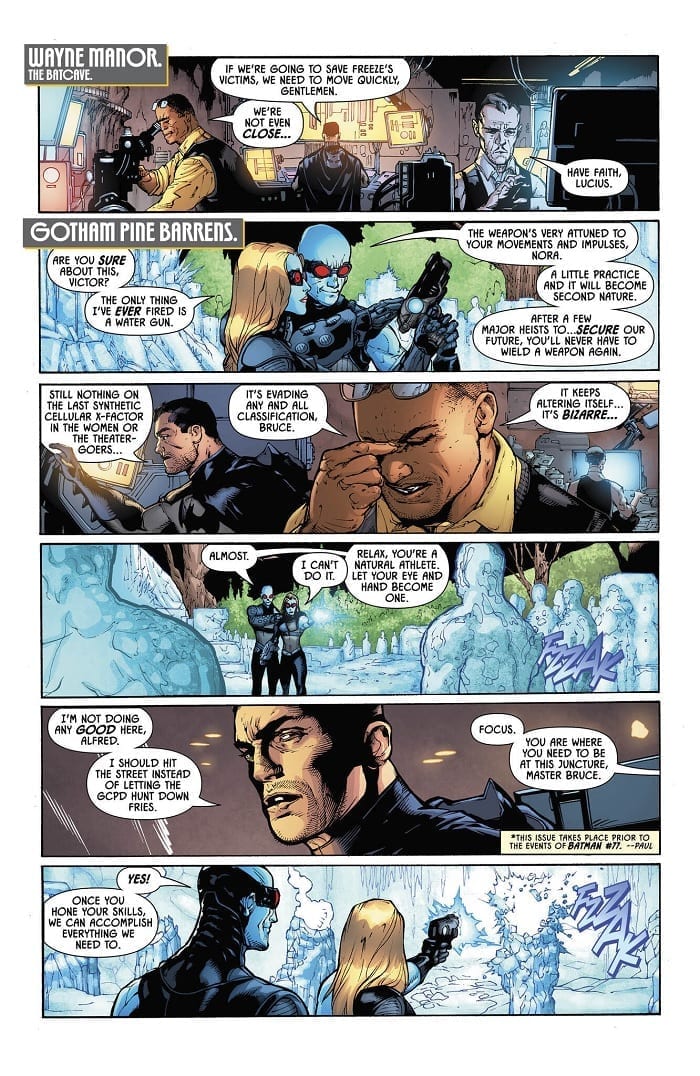 Writer Peter J. Tomasi gives us a well-paced and engaging story. The tension surrounding Batman’s race against time mounts as the book progresses. We feel the desperation and frustration of the characters as time ticks away.

Detective Comics #1015 gives us a reasonably-surprising twist, which serves as the narrative focal point of the book. It doesn’t come out of nowhere, though; Tomasi did a solid job of foreshadowing this surprise in earlier issues. As a result, it feels like a natural and reasonable course of events in the tale at this point.

The tables have turned entirely by the end of the book. It makes for some dynamic and engaging storytelling, and one of the more interesting stories we’ve seen in some time focused around Mr. Freeze.

There are some points at which the writing comes up short, though, and the issues lie mainly in characterization. The manner in which Bruce decides to test his serum, for example, feels inconsistent with his character. Batman is supposed to have a great tactical mind; here, though, he takes unnecessary risk for little apparent reason. As a result, he ends up handicapping himself throughout much of Detective Comics #1015.

Speaking of breaches of characterization, we see even more of this from Nora. She makes a snap decision that, while not unreasonable given the circumstances, doesn’t seem well-established based on what we’ve seen of the character thus far. As mentioned, this twist doesn’t come out of nowhere; however, the way it’s scripted makes it fall a little flat. The result is an interaction between Nora and Victor that feels stilted. The dialogue relies on melodrama that reads like the teleplay to a somewhat-dated soap opera in order to reach the necessary emotional pitch. 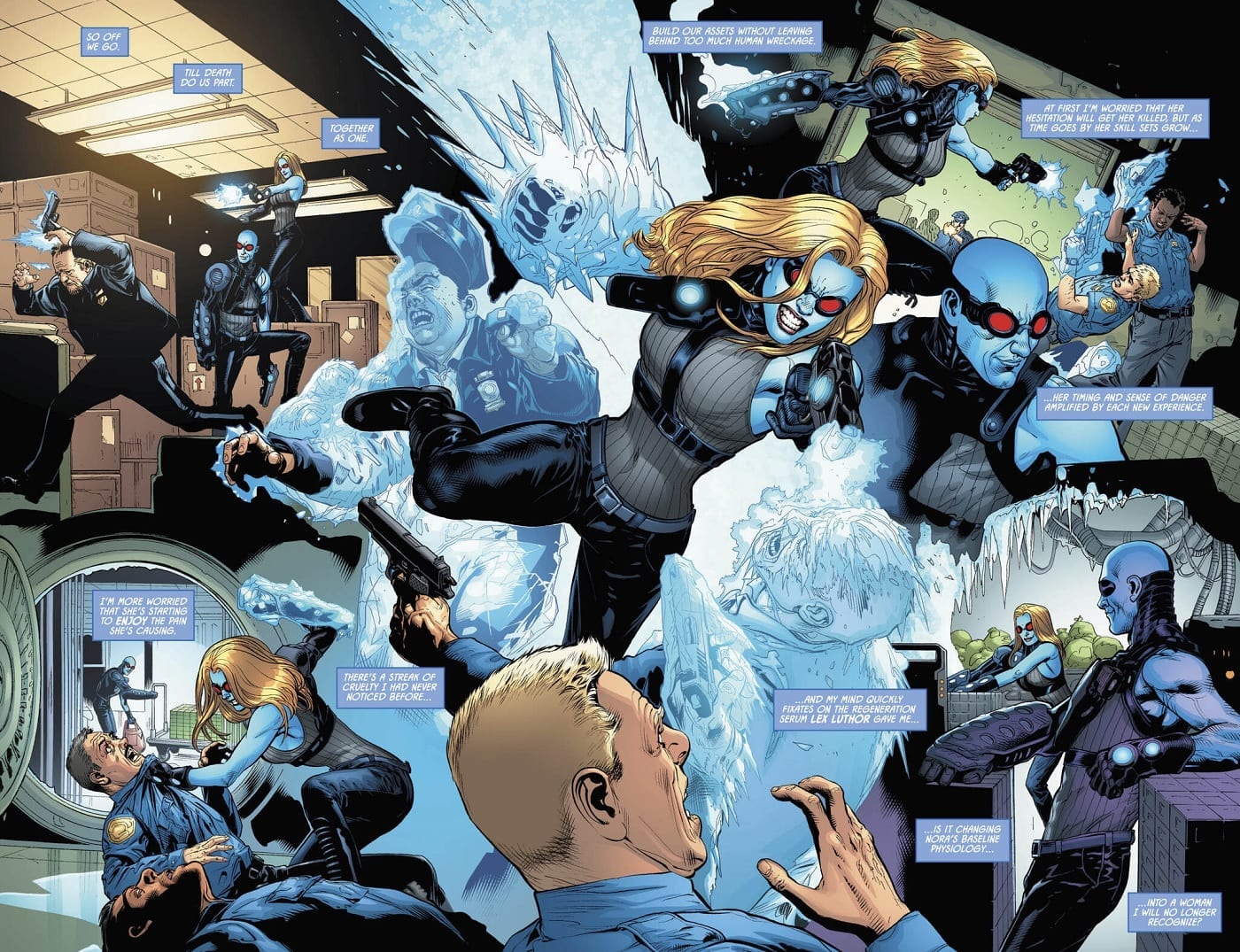 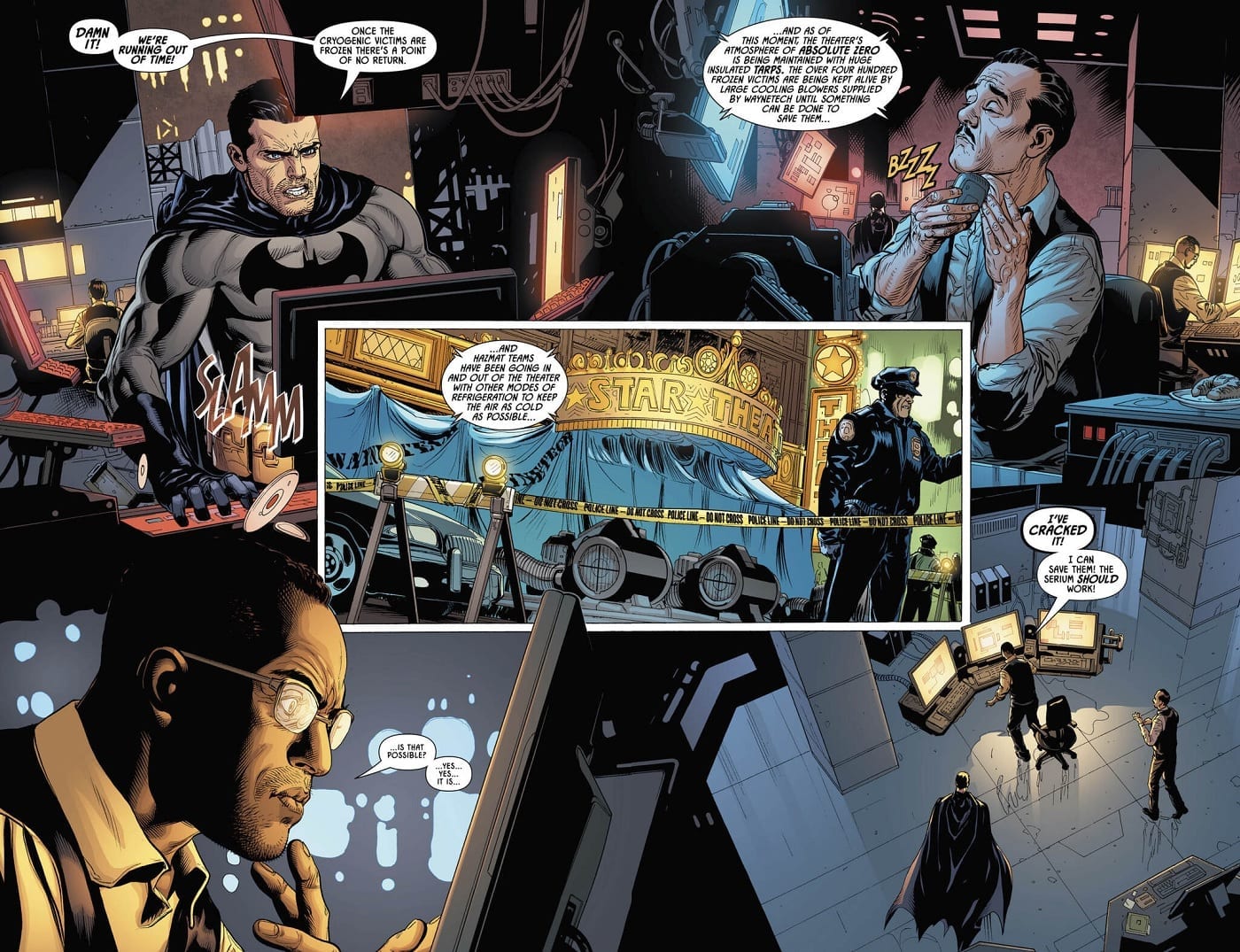 Overall, artist Doug Mahnke brings many of the same strengths to the table in Detective Comics #1015 as we’ve seen in other recent issues. This time, he’s backed up by fellow artist Jose Luis (not to be confused with José Luis García-López).

The work is dynamic and lively, yet it’s still fairly clean. Although Mahnke opts to dedicate much of the book to tightly-cropped panels with close-up illustrations focused on characters, the reader rarely feels lost in the setting. At only a couple of points did it feel a little spatially muddled, but nothing too distracting.

That said, the character designs are not always as consistent as in previous issues. There are panels, especially in the first half of Detective Comics #1015, where characters are depicted from awkward angles, or appear somewhat bloated or chunky. It’s not distracting enough to overshadow the positive aspects of the artwork, but it does produce some less-than-stellar panels.

The colors by artist David Baron are again vivid and varied. The shocking blue of the ice immediately draw the reader’s eye. The colors are well-balanced, though, despite the wide range of tones employed.

Detective Comics #1015 is not without flaws, but it’s plenty serviceable. It’s worth grabbing a copy to keep up with Tomasi’s ongoing story.