Review: the Hunter & the Hunted in DETECTIVE COMICS #1010

Just sit right back and you’ll hear a tale… Well, it’s a tale of Batman, some billionaires, an assassin, and a couple of long-lost castaways on a South Pacific island in Detective Comics #1010, out this week from DC Comics.

Bruce is separated from the rest of the survivors after their plane crashes on a seemingly-deserted island. He’s rescued by some unexpected residents, but the rest of the party remains under Deadshot’s command. For now, it’s up to Batman to try and rescue the captives, even if help is still thousands of miles away. 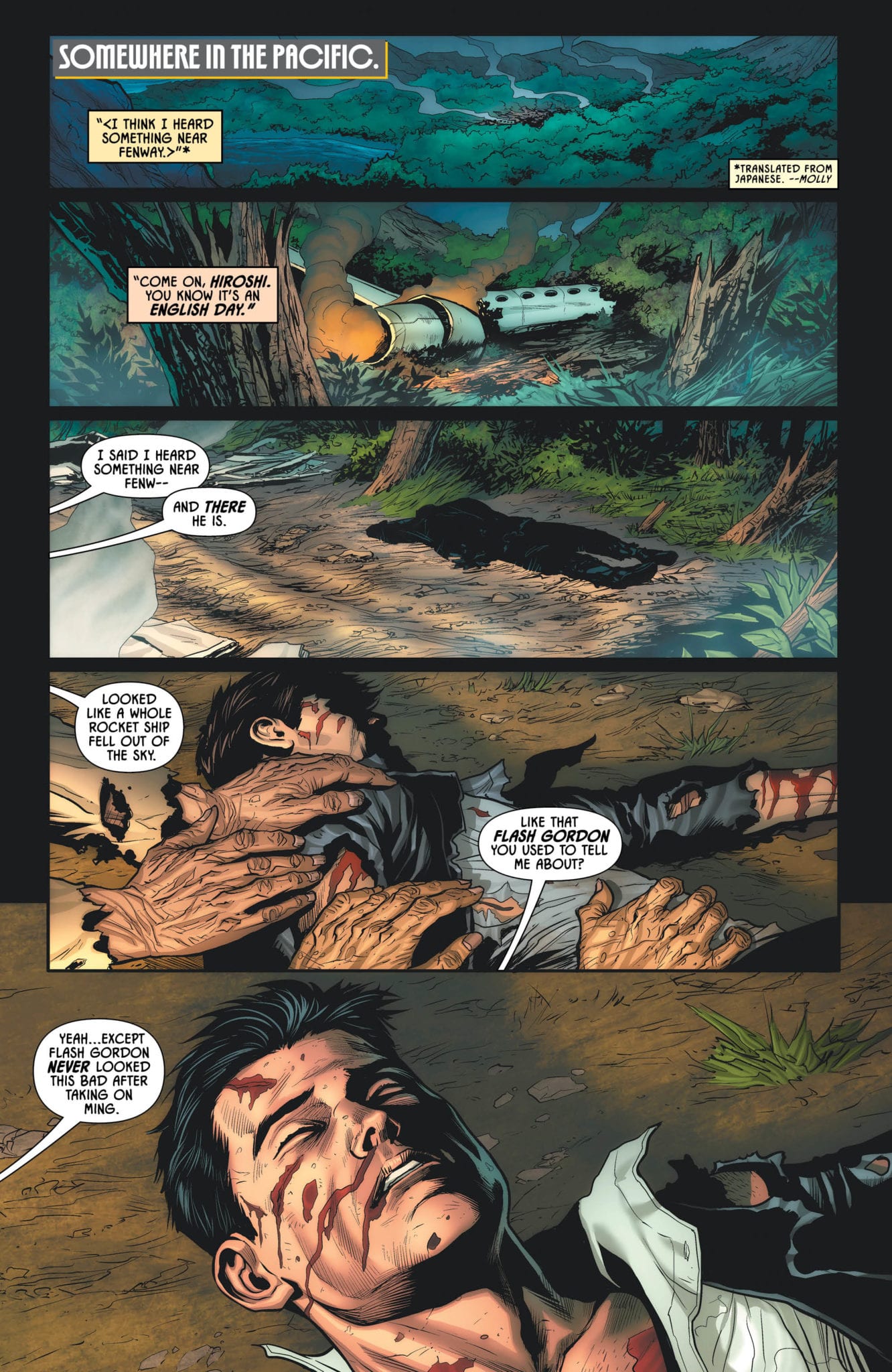 Detective Comics #1010 delves into many of the tropes of “stranded on an island” stories. We have man-eating animals, surprising locals, perseverance against adversity, man’s inhumanity to man…it’s all here. The tone is part Lost¸ part Gilligan’s Island, a fact that Deadshot himself lampshades at one point. Writer Peter J. Tomasi is able to take those clichés and do something interesting with them, though.

Bruce spends a large chunk of the issue swapping stories with two castaways stranded on the island since World War II. This twist is likely inspired by real-life stories of soldiers hiding out in the jungle for decades, unaware of the war’s end. The men, Clarence and Hiroshi, have an interesting and charming tale to tell, and will presumably return in successive issues. Former enemies, they eventually learned to trust one another and survive. This theme of enemies-turned-allies seems to echo the issue’s official synopsis on DC’s website, despite the narrative not really progressing to that point in the story just yet.

Most of the book’s action is contained within the last few pages. Detective Comics #1010 builds to a suspenseful ending, hooking the reader and ensuring we come back for the next issue.

The book lays a mystery regarding who paid Deadshot to kidnap the people. We’re yet unsure of how this plays into a larger narrative, but the character’s statements suggest there’s much more at play than just what we see here. It’s quality writing all things considered. 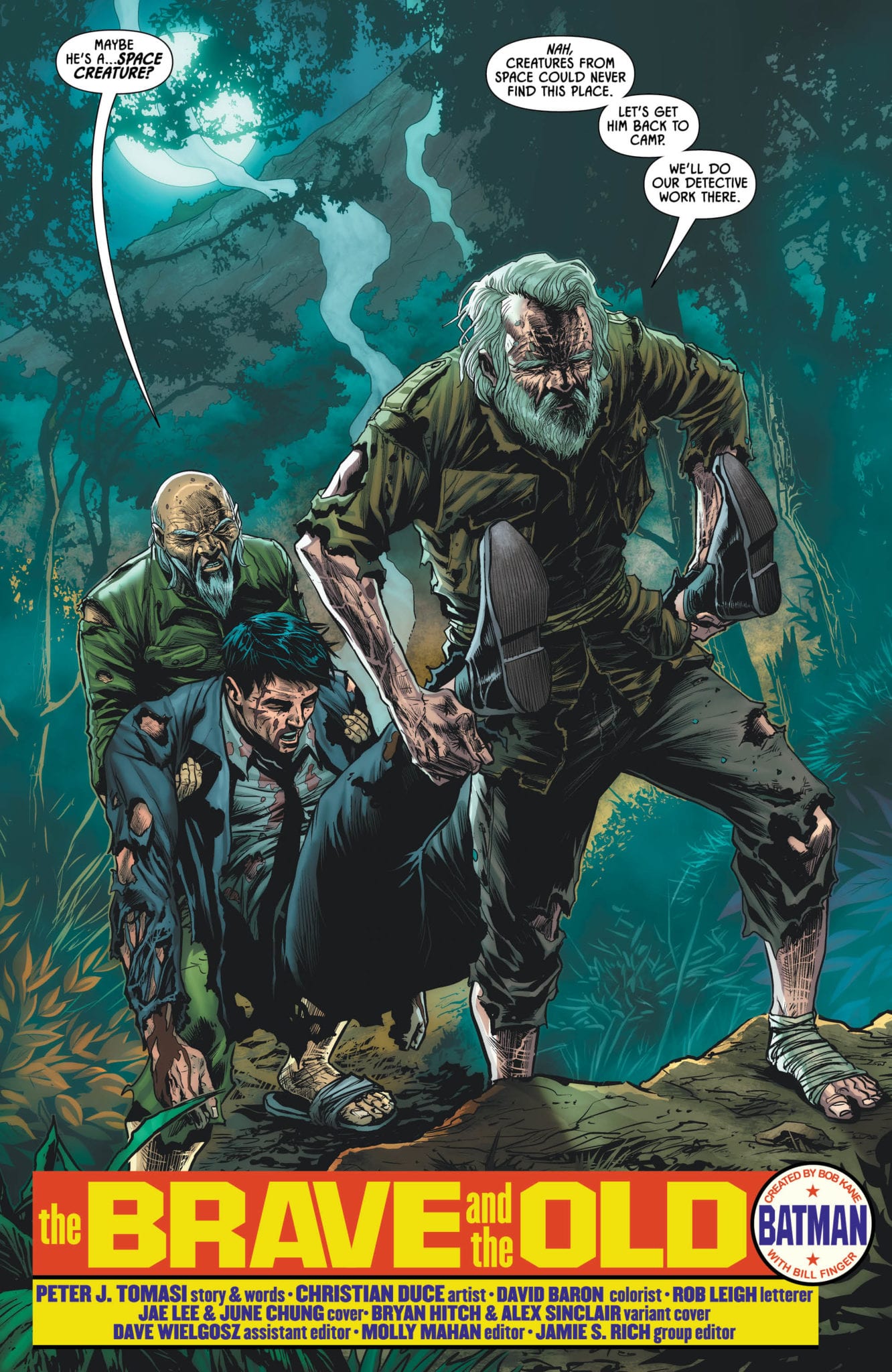 Artist Christian Duce is back for Detective Comics #1010. He brings many of the same strengths to the table we saw in our last issue, blending expressive and exaggerated elements alongside more grounded images.

Duce generally sticks to a very meat-and-potatoes approach here. No elements of the work leap out as exceptional, but on the flipside, everything is firmly respectable. There’s no shame in that; as a visual storyteller, one doesn’t need to mystify the reader on each page. The work hits the narrative beats well, forming a cohesive final product.

David Baron provides colors for Detective Comics #1010, bringing a vibrant and varied palette to the table. From the lush, bluish greens of the jungle to the fiery reds and yellows of Deadshot’s blaster, Baron meshes nicely with his fellow artists on a stylistic level. He even embraces a sepia tone at one point, which was a nice stylistic touch given the subject at hand.

Detective Comics #1010 is a great chapter in Tomasi’s ongoing story. It’s Batman by way of a WWII-era Howling Commandos comic, so if that catches your attention, you’ll find plenty to like here.