It’s the start of a new story arc in Detective Comics #1006, and the creative team of Peter J. Tomasi and Kyle Hotz aren’t shying away from the dark content here.

A grisly, cult-like execution in a Gotham alley calls down perhaps the DC Universe’s most lethal enforcer, The Spectre. In the ensuing chaos, the entity’s host goes missing. The disappearance forces The Spectre to turn to none other than the world’s greatest detective for help.

As mentioned above, Tomasi doesn’t shy away from the darker tone of Detective Comics #1006. The story opens on a pretty grim sequence, and only pushes it further from there.

The crux of the mystery hinges on this strange cult group. They appear to be devotees of The Spectre, though the entity itself has little affection for them. One, after spilling blood to summon his master, begs The Spectre to “unleash his terrible wrath” on him. With this following up on our previous arc, the paramilitary zealots seem to be a recurring trend in Tomasi’s run.

That said, the primary tension in the story doesn’t focus on the cultists. Rather, it lies in the conflict between Batman and The Spectre’s methods and ideologies. The former, of course, abhors killing, while The Spectre describes his approach as “eye for an eye.” Of course, even that description may too generous, given he basically reduces his victim to a puddle of viscera. Like I said, the writer’s not afraid to get dark with Detective Comics #1006.

Overall, the writing in this issue is a strong opening to the new arc. Tomasi builds suspense, laying out an intriguing mystery without tipping his cards. The darker tone is unlike the stories we’ve seen in recent Detective Comics issues, setting up what could be a pretty twisted ride. 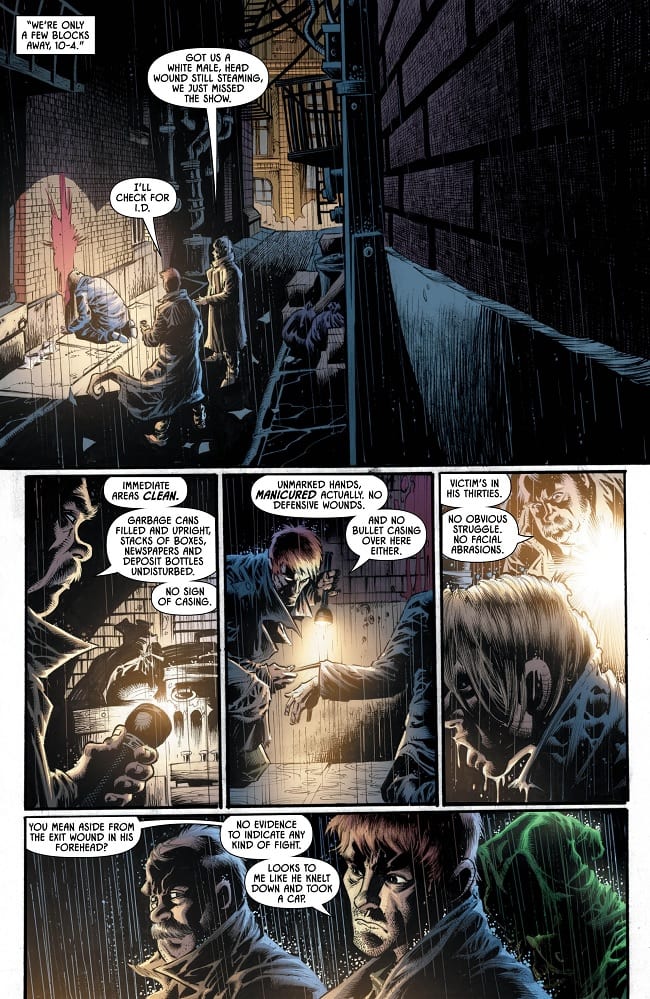 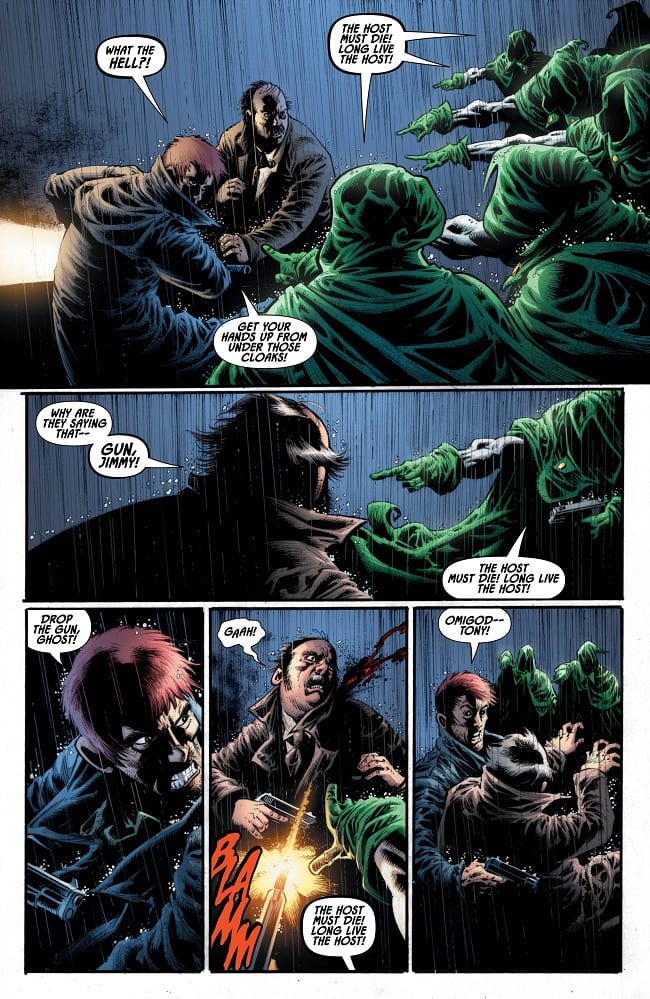 Hotz provides some moody, stylized artwork for Detective Comics #1006. Batman’s design harkens back to the ‘90s in many regards; the longer ears, the angular face, and the flowing, ragged-looking cape. It’s a fun throwback, and it fits the darker tone of the story well.

The artist delivers some striking imagery in this book. One could easily see numerous images pulled from the pages of Detective Comics #1006 and blown-up to print size. However, the consistency does falter from time to time. The way Hotz frames select panels can make it difficult to distinguish what’s happening at first glance. Overall, there’s far more which works than which doesn’t, though.

David Baron turns in solid work in the color department as well. The shadowy, noir tones of the book contrast with rich colors and occasional neons that seem to glow with a radioactive characteristic. It’s a unique look, and it works well here.

Detective Comics #1006 is a promising start to this new arc. The darker thematic elements and appealing artwork are a change from what we’ve seen in the book lately, but not an unwelcome one.