Review: DAREDEVIL #11 Walks The Fine Line Between Right And Wrong

DAREDEVIL readers are undoubtedly still reeling after the explosive events that took place in issue #10. They saw Matt Murdock dive face-first into his affair with Mindy and witnessed an attack on Detective Cole North occur within his own precinct, but the biggest surprise came in the duo’s unexpected team-up against dirty cops. Now the hero formerly known as “Daredevil” questions whether he’s really decided to give up crime-fighting or if it was just a lie he was telling himself. At the same time, Spider-Man returns onto the scene, and he has a few questions he’d like to pose to Cole following the previous issue’s incident.

Readers will get to experience even more action alongside Matt in DAREDEVIL #11, available in comic book stores on Wednesday, September 11.

Following the shootout with the crooked cops last issue, Matt takes to the rooftops once again, only to be confronted by none other than Elektra. His rival and former lover asks him why he seems to be half-heartedly continuing the fight despite swearing off of it. In her mind, he needs to find a new way of combating the evils that plague Hell’s Kitchen. But with the lingering guilt of his accidental killing as Daredevil, coupled with his affair with Mindy, the Man Without Fear realizes the line between good and evil is more complicated than he once believed. 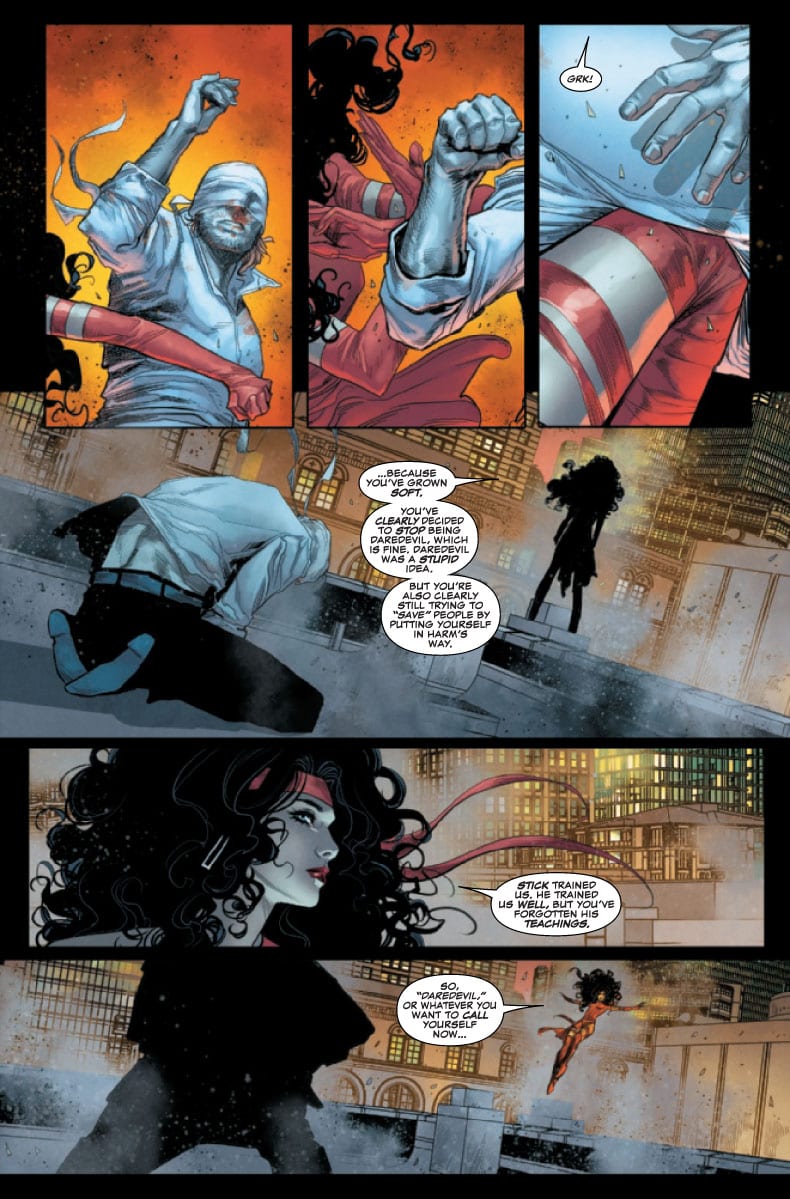 At the other end of the spectrum lies Cole, who’s been reevaluating his own particular brand of black and white thinking (in this case regarding the law). After patrolling the streets for a while he’s apprehended by Spider-Man, the one hero who felt it was his duty to encourage Matt to relinquish the Daredevil identity for a time. Cole questions whether the Wall-Crawler believes he’s above the law, to which the hero replies,

Yeah. I kinda do. Happy now? What kind of laws are there about a guy who can throw cars and jump over buildings and save thousands of people but needs to wear a mask to keep his loved ones safe?

Cole takes all of this in and decides to act, but it’s unclear whether he still believes superheros should be punished according to the traditional laws or not. One thing is certain, though: Cole now knows more about the complexities that arise when one equates following the law with being morally right.

Marco Checchetto’s pencils and inks, Nolan Woodard colors, and Clayton Cowles’ letters are spot on in this issue. The coloring of the copycat Daredevil vigilantes use an almost identical shade of red to trick readers into believing they’re the real deal. The penciling contains the slightest details that distinguish it from Matt’s official suit, forcing us to analyze everything going on in these action-heavy scenes. In addition, the lettering boxes give us great insight into each character’s internal dialogue, clearly differentiating it alongside their spoken words. 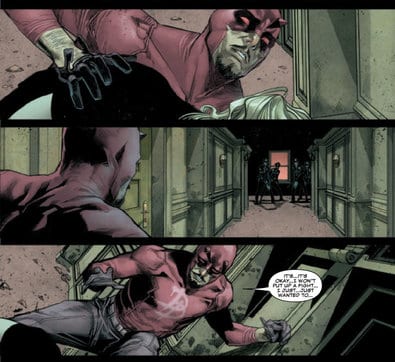 Julian Totino Tedesco’s cover artwork features an image of Spider-Man’s face bursting forth out of Matt’s own. This surreal illustration reminds readers of the hero’s close connection, especially in regards to Matt’s decision to quit being Daredevil.

Koi Pham and Romulo Fajardo Jr.’s Immortal Wraparound variant art is a sight to behold; it features all of the iterations of Matt/Daredevil, hearkening back to the internal war within our hero as he tries to decide what kind of identity to adopt.

DAREDEVIL #11 asks hard questions about morality, offering an intriguing philosophical approach to this action-heavy series. We’re excited to see what Matt and Cole do next in issue #12.

What did you think of Spider-Man’s guest appearance in this issue? Let us know the comments below!

Chip Zdarsky's writing in this issue captures the heart of Daredevil, highlighting one of his more interesting traits: his willingness to continually question his morality and motives.Review: DAREDEVIL #11 Walks The Fine Line Between Right And Wrong