CONTAGION #5, available in stores Wednesday, October 30th, is the concluding chapter to this five-part miniseries. We’ve witnessed the outbreak of a parasitic fungus that’s infected New York’s heroes, beginning with the Fantastic Four (minus Ben Grimm) and continuing its rampage among the remaining protectors. But the contagion, known as the Urchin, has laid waste the Avengers and most everyone on the scene, leaving the future to an unlikely hero: Moon Knight. Will he find a way to stop the threat that took down Earth’s mightiest heroes?

To the casual comic book fan, the vigilante hero Moon Knight may seem like a Batman knock-off, especially with his brooding, assortment of gadgets, and guilt complex. But beneath Marc Spector’s gruff exterior lies a fractured psyche, allowing him remain largely immune to psychological controls (like the Urchin) that could best even the Dark Knight. This special talent give the hero reason enough to plan an infiltration of the creature’s mind. 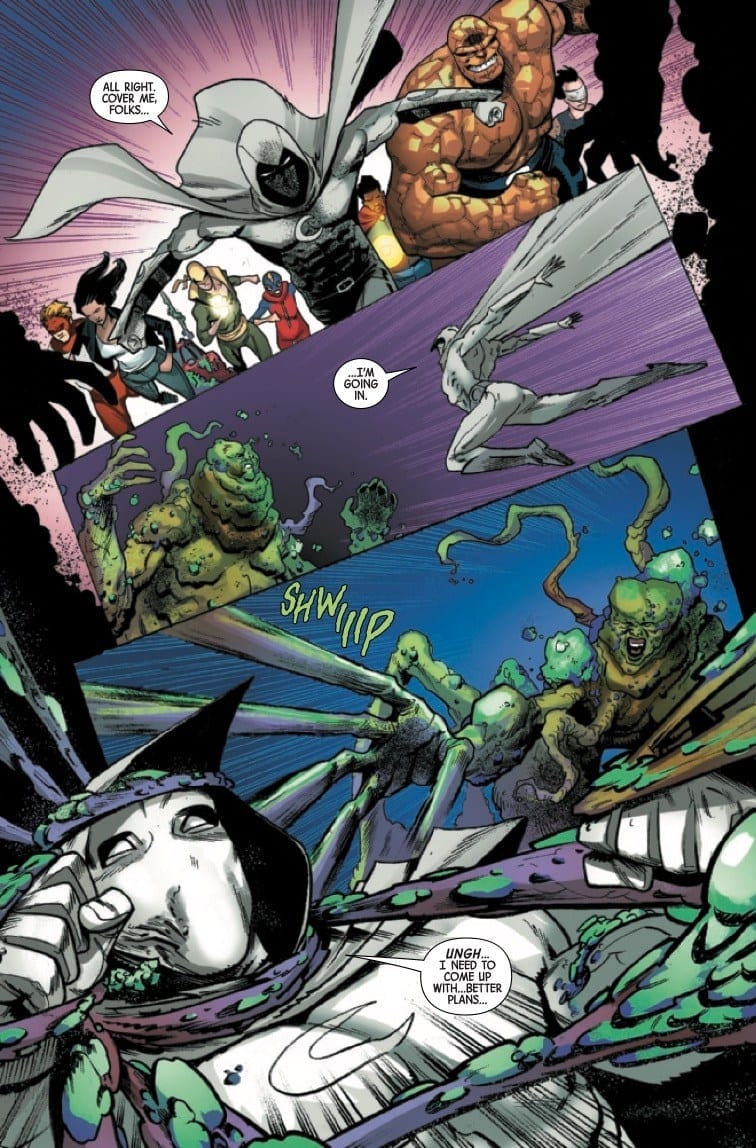 After becoming successfully absorbed by the Urchin, Moon Knight searches for the core of the creature’s mind, but runs into various zombified versions of the heroes under its control. One of these is the freshly absorbed Pie after a hard-fought battle. Enraged at the monster for absorbing a child, Moon Knight slices the mental tendrils to bits before they can take over Pie’s mind. And now the two bravely face the inner workings of the Urchin in a rescue mission that could potentially spell the end for everyone.

Writer Ed Brisson makes this version of Moon Knight relatable and distinct in his personality, representing those of us who feel like their inner thoughts are full of madness. This hero shows us that despite the mental issues affecting us—depression, anxiety, bipolar disorder, and more—we all have the capacity within us to save the day. We just need a supportive team to have our backs.

Adam Gorham, Roge Antonio, Mack Chater, Damian Couceiro, and Stephen Segovia’s illustrations, in conjunction with Veronica Gandini’s coloring, are a charming blend of psychedelic bliss and disturbing horror. The fungi-covered heroes and buildings of New York’s Yancy street bring to mind apocalyptic images in classic sci-fy stories. But the really enjoyable elements are found within the Urchin itself; Moon Knight’s journey through this twisted mangle of minds is reminiscent of a Magic School Bus trip within someone’s body, depicting colorful, organ-like structures set in front of a backdrop of membranes and tissues. What’s more, the art within the Urchin meshes well with VC’s Cory Petit’s lettering, which seems to follow Moon Knight in each panel as he tumbles around in the chaos. 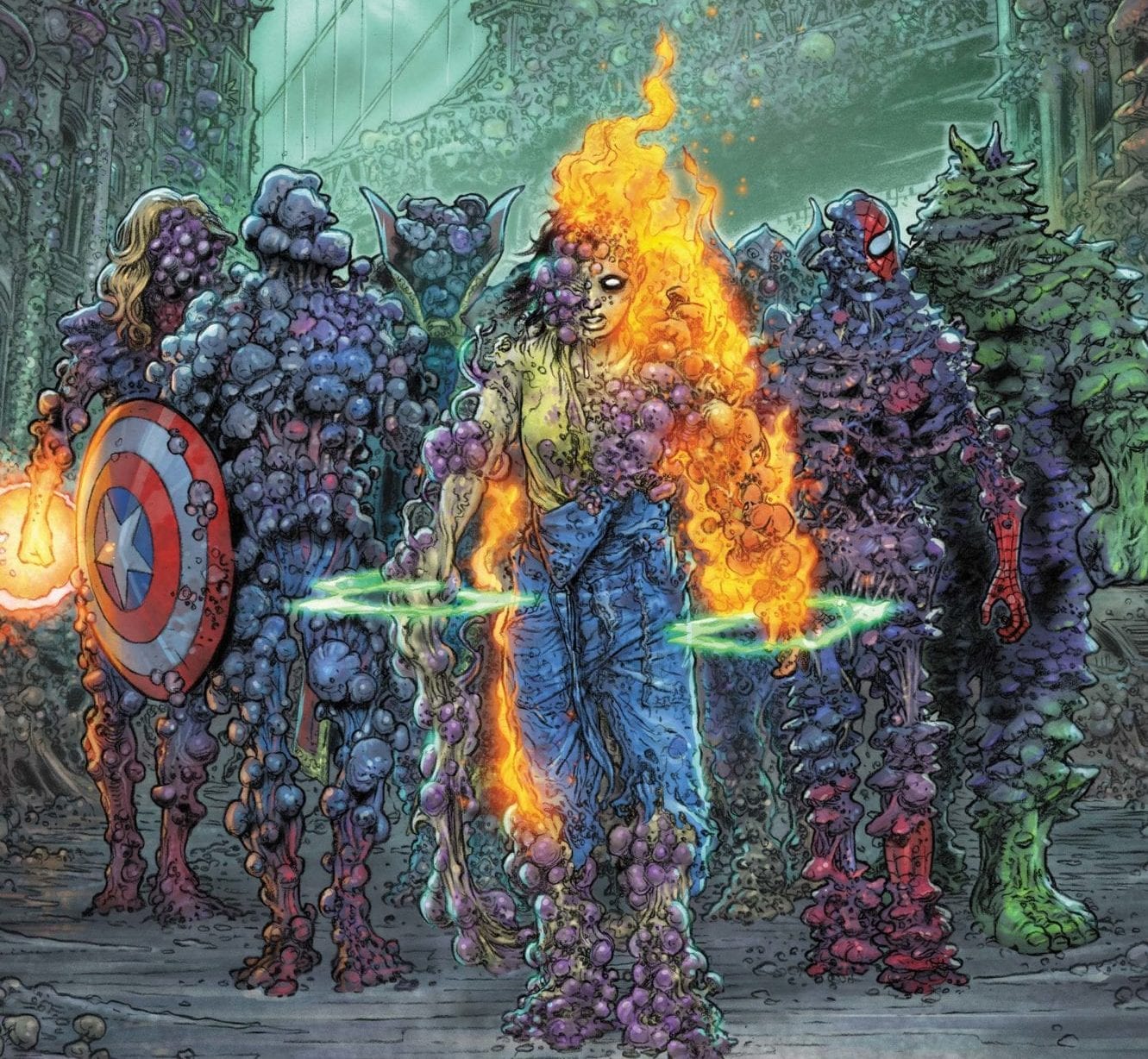 Juan José Ryp & Jesus Aburtov’s cover artwork depicts Ruby, the unwillingly host of the Urchin, along with the main roster of Avengers in calcified (or “fungified”) form. The group is set against a backdrop of fungi-covered buildings and bridges as well. These images together show how the contagion, much like any disease of the body or mind, infects everything around us.

Ryan Browne’s variant cover illustration is much like the main cover in its focus on the characters infected forms. But instead of the heroes, this version places the focus on Yancy Street resident Ruby. Readers are brought back down to earth by seeing the true damage this contagion has wrecked on normal people.

The message in CONTAGION #5 hits home, but the wrap up seemed a bit rushed. It would have been nice to learn more about the intricacies of the Urchin and see exactly how it exerted so much power over our heroes. Still, the series was a blast to read and brings light to one of Marvel’s most overlooked Moon-themed characters.

Were you satisfied with the conclusion of this series? Let us know in the comments below!