Review: Conan #10 – The Birth of New Problems for the Cimmerian 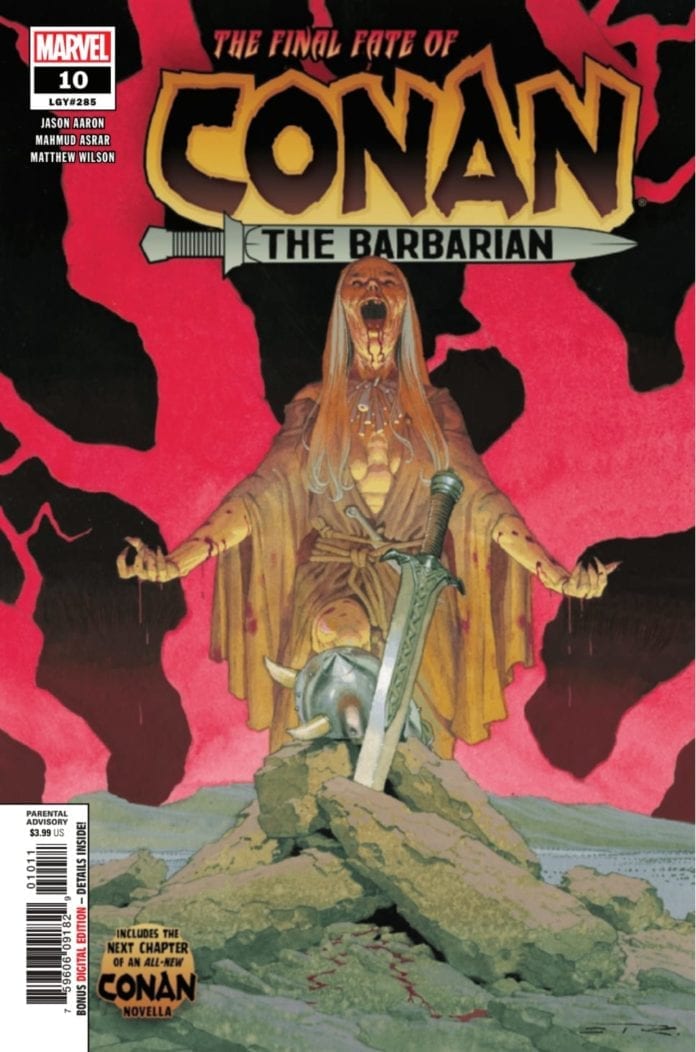 The Crimson Witch continues her quest to raise the demon Razazel in Conan #10 as she is impregnated and delivers twins. The children (fraternal twins named Razza, a boy, and Zazella, a girl) are intended to carry on the glory of Razazel by helping their mother kill a warrior whose blood has grown powerful through a lifetime of slaying his enemies. The sacrifice will bring the powerful demon to Earth, where we can assume he doesn’t have mortals’ best interests in mind.

(I had triplet girls in the Crimson Witch baby shower pool)

The story jumps around in time as we see the kids next around age four or five when they’re playing hide and seek. Mother Crimson Witch calls them to her, announcing she’s leaving to find “a slayer unlike any other.” As she mentions him, the Barbarian arrives and appears to lop her head off while the children are hiding.

(Wonder who she means?)

The Crimson Witch somehow survives the attack, thanks in part to her children sewing her head back on, and said spawn continue on, searching for Conan. For years, they follow him, waiting for his blood to strengthen as he does what he does best. When they are finally able to catch him, they attempt to use him to raise Razazel, with gruesome results.

Jason Aaron, whose work on Thor has made him as synonymous with the Asgardian as Walt Simonson (yeah, I said it), has indelibly put his prints on Conan using the same methods that gave the Thunder God an identity away from Chris Helmsworth’s portrayal in the movies. The combination of over-the-top murder combined with real humanity makes Conan, specifically this story, almost touching.

These aren’t evil children, at least not in the classic sense. They regular kids, playing regular games, raised by a mother who loves them. Classic Conan stories would see the twins as a monstrous duo with the Crimson Witch raising them solely to do her bidding. Aaron’s story gives a glimpse of a mother who dotes on her babies with those babies respecting her and seeing her only as their mother. But, you know, also planning to murder Conan in order to bring Razazel to Earth.

The artwork is well-suited for the story. Mahmud Asrar’s pencils are perfectly imperfect. A Jim Lee or Andy Kubert would be overkill for a run like Conan’s. The art, with Matthew Wilson’s colors, creates a definite mood, and that mood is dark. From the first page to the final splash, everything about this comic moans darkness and witchcraft. Conan is only a bit character, for the most part, with the children and their mother at the forefront. The lettering, done capably by VC’s Travis Lanham, moves the story along without distraction and shines with era-appropriate calligraphy.

It’s easy for a book like Conan to get lost in a cycle of old stories and stereotypical barbarian banter and bloodshed, but this team seems to have not only a solid grasp on the title character but the ability to humanize its villains as well.

How do you like the flow of Jason Aaron’s Conan? Provide your opinions below.