Review: The House Of El Comes Together In SUPERMAN #11

Since witnessing Jon returning from space seven years older, Clark Kent has undergone tremendous emotional pain. He’s failed to be there for his son during the most formative years of life, and all the blame appears to point toward Jor-El. But the House of El has a bigger problem to handle first: a massive fight near Earth between three warring races. Can the family come together and defeat this threat despite their internal strife?

The time has come for Clark and Jon to confront Jor-El and figure out why so much trouble follows in his wake. But after surveying the area, they note the three civilizations warring near Earth have some connection to the House of El. Clark, instead of destroying them outright or interrogating them, chooses to engage the issue with diplomacy in the hopes setting a good example for Jon. 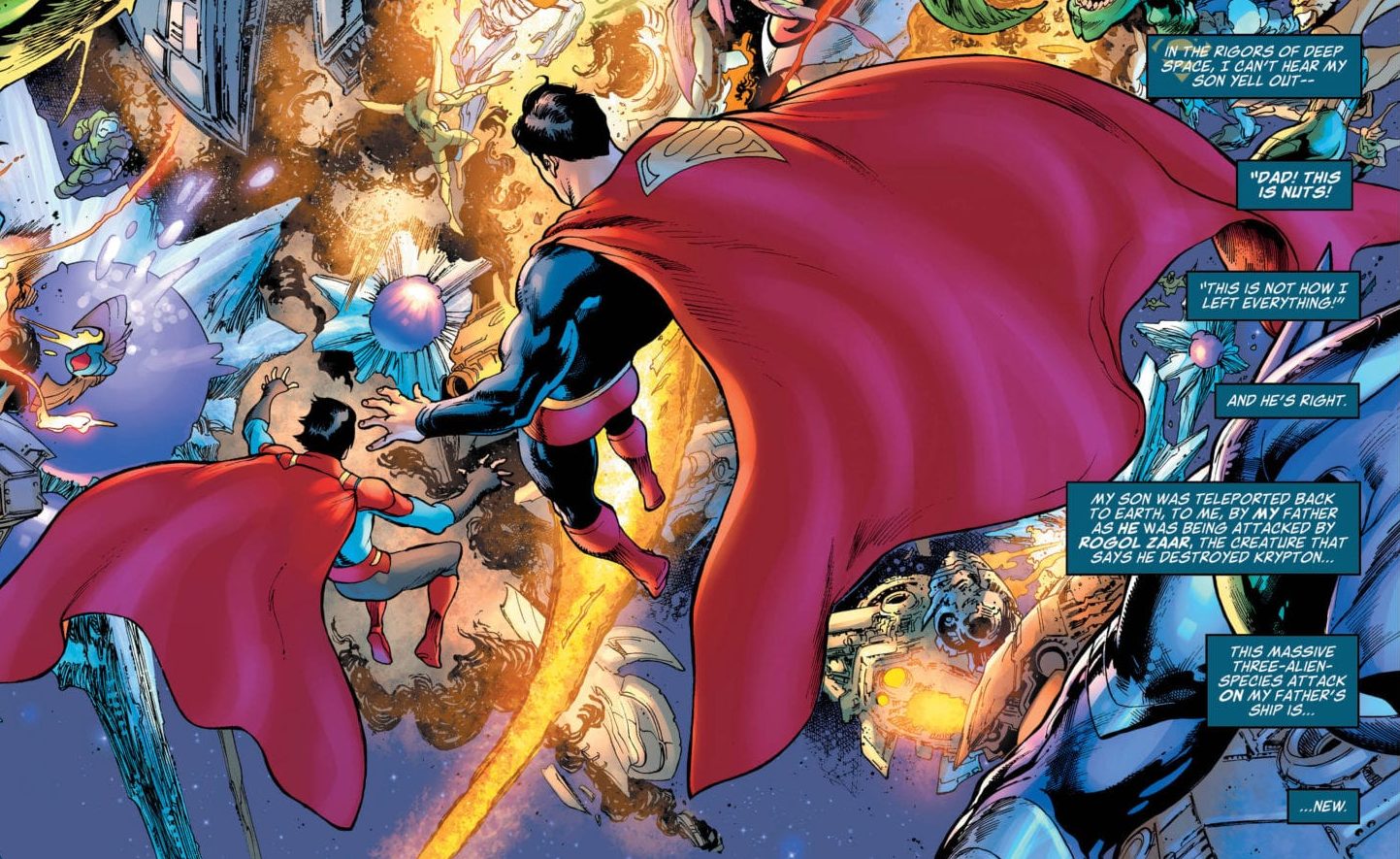 Brian Michael Bendis’ more than proves his ability to write from a caring father’s perspective. One easily sympathizes with Clark’s regret at his son growing up without him. But this sadness is soon outweighed by the hope of the teaching moment that presents itself.

Clark spends most of the issue confronting Jor-El in order to learn more about the conflict at hand. But just as they’re about to argue Rogol Zaar and General Zod, villains thought to be imprisoned in the Phantom Zone, attack the heroes directly. The House of El will have to face these villains who seek revenge against the family they hate the most.

Ivan Reis’ penciling, Alex Sinclair and Gabe Eltaeb’s coloring, and Oclair Albert and Joe Prado’s inking, give this issue an authentic Superman vibe. Reis’ penciling crafts fully formed characters amidst Sinclair and Eltaeb’s brightly colored backgrounds. In addition, Albert and Prado use their heavy inks to give the illustrations a sense of boldness readers have come to expect from the Man of Steel.

The main cover crafted by Prado, Reis, and Sinclair features Rogol Zaar standing over the seemingly defeated House of El, alluding to an unfortunate future they must avoid at all costs. Adam Hughes’ variant cover places the focus on Clark in his journalist attire with news reports of Superman in the background, giving readers a classic depiction of the House of El’s most famous member.

SUPERMAN #11 depiction of the House of El contains all the drama, disagreement, and deceit one would find in most families. But it also brings them together in a satisfying way.

Do you think the House of El can withstand the coming conflict? Let us know in the comments below!

Review: The House Of El Comes Together In SUPERMAN #11A brilliant look at Clark's ability to simultaneously negotiate a peace treaty while teaching his son a valuable lesson in peacekeeping.