While the writing may be a bit messy, Thompson, Nadler and McCrea still manage to create a fun ride of a follow-up issue filled with Marvel cosmic lore and awesome action with a twist that is sure to impact the “Annihlation: Scourge” crossover event.

After fleeing a weapons deal gone-bad and somehow finding the all-powerful Cosmic Urn, Yondu Udonta flees to the underbelly of a smuggler’s hideout to flip the relic for a mountain of cash. However, he doesn’t yet realize he’s being followed – not just by his supposed descendant from 1,000 years in the future, but by a merciless cyborg assassin hellbent on retrieving the urn by any means necessary. 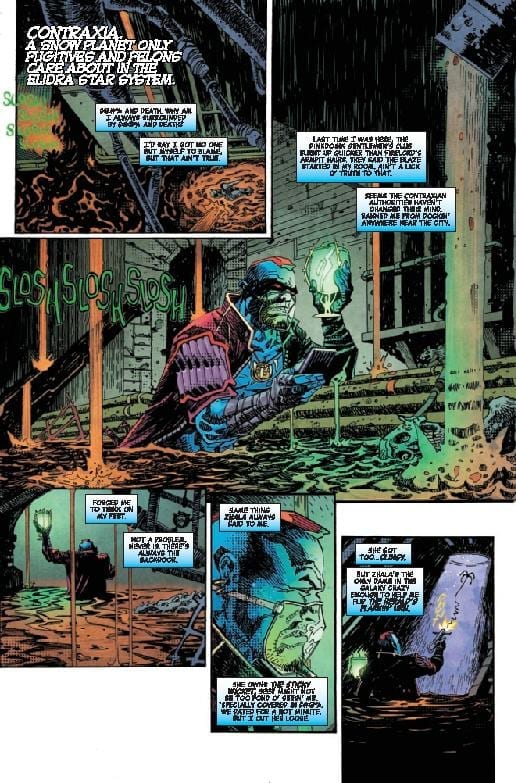 Writers Zac Thompson and Lonnie Nadler set up a believable narrative style for Yondu as a character in the first issue. He talks to himself constantly, giving the audience exposure to the larger story as well as the insecurities and beliefs of the space pirate himself. While this was necessary and useful in the first issue, here it comes off as a bit dense and melodramatic. This, again, probably fits the protagonist. However, opening pages that are filled with Yondu’s internal dialogue would be better served with a “less is more” approach to the writing. McCrea’s expressive art would give most readers all they need to know about Udonta’s motivations. This being said, most of the writing here is still fun, with snappy dialogue that fits the sort of slimy chaotic atmosphere that such a story needs to exist in. All of the individual characters have their own sense of dialogue, and it’s especially fun watching the two Yondus (our sleazy protagonist and his noble descendant) interact with such polar opposite behaviors. Yondu Udonta himself is a character whose colorful and sleazy personality Thompson and Nadler have nailed down. 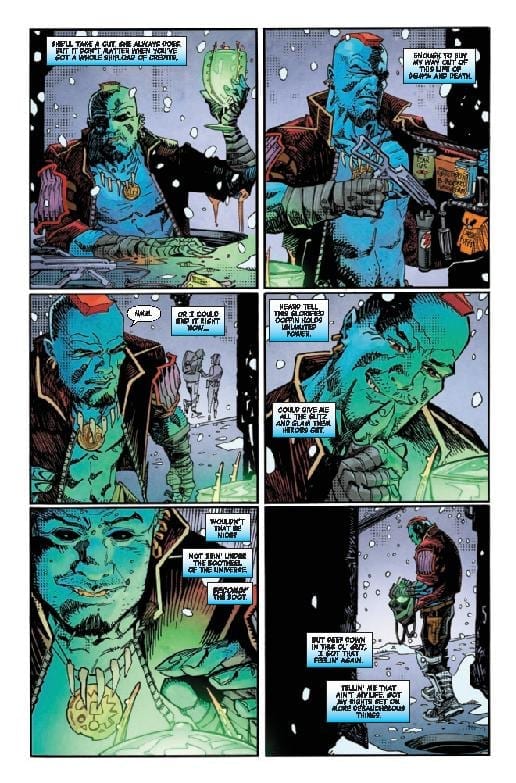 Probably the most attention-grabbing part of “Yondu #2” is the several-page long flashback explaining the origins of the Cosmic Urn. Without getting into spoilers, it’s a short but massive scale story that is sure to please die-hard Cosmic-Marvel fans and relative newcomers alike. This being said, this part is a bit of a double-edged sword. On the one hand, it’s a really cool moment that connects this otherwise small-scale story to the massive Marvel universe as a whole. On the other, it is a giant exposition dump that does harm the pacing of the main plot while also relegating an important new supporting character to a plot-spigot. It is still a worthy addition, and this supporting character is given some cool moments in a fantastic action set-piece moment, but it is something to note.

While the art from John McCrea and colorist Mike Spicer was impressive in the prior issue, “Yondu #2” gives the pair much more to work with. McCrea’s easily identifiable style and deft hand at creating characters up t no good once again works perfectly for the sort of comic “Yondu” is. Character drawings from Yondu himself to the strangest aliens all look like a part of the same universe while still being creatively designed on their own. The kind of filthy aesthetic McCrea maintains is spot on for the atmosphere and environments that are represented, from alien sewers to space-port gentleman’s clubs. The flashback sequence mentioned earlier gives McCrea a chance to work his magic on some of the more iconic members of the Marvel cosmic cast, and his versions do not disappoint. His usual eye for sleazy detail is traded in for moments of genuine beauty for a short time. What’s more, McCrea is given the chance to draw out a chaotic fight scene, and the man nails it. The momentum and sort of low-brow brawl that ensues in this issue is given the kinetic qualities a fight scene should have. 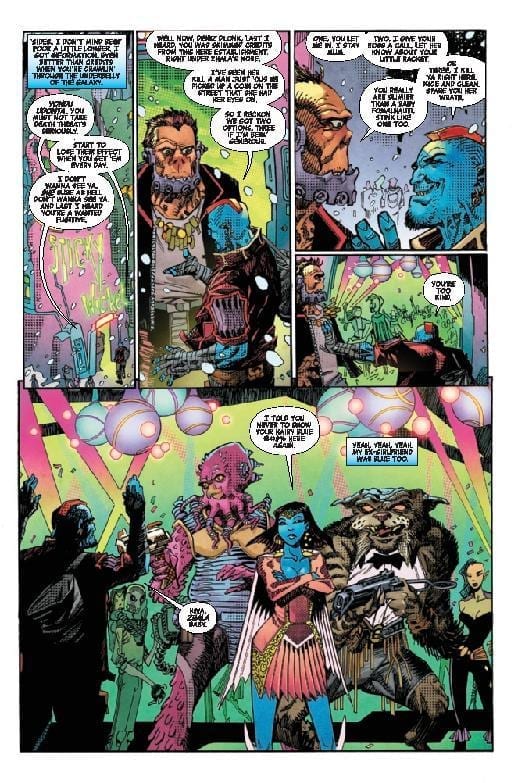 The color work in this issue as well is astonishingly good, as Spicer fills in McCrea’s usual more scuzzy panels along with the more colorful cosmic moments with a wide range of a palette. The dark corners of filthy neighborhoods are filled with grime and dust, while the urban neon of a smuggler’s red light district booms with visual flare. The big spacey moments look fantastic as well, and there’s a certain late-issue twist that gives Spicer a lot to work with. Overall, wonderful art as usual on this issue.

“Yondu #2” is a thrilling and engaging ride of a second issue. Even though it gets a bit cumbersome with its exposition and a cool supporting character addition goes a tad wasted, this is still a comic that’s a good time to read with humorous exchanges and stellar artwork. If you enjoyed the first issue, be sure to pick up this follow-up on 11/27 at your local comic shop.

Review: Chaos Follows Cockiness In YONDU #2"Yondu #2" makes for a fun event tie-in with some messy and exposition-filled writing backed up by great action and fantastic artwork.