Writer Tim Seeley (Grayson, Hack/Slash) comes together with a fantastic art team to create a blast of a first issue in “He-Man: Masters of the Multiverse #1.” The debut comic for this six-issue mini-series is sure to please long-time He-Man fans, while still bringing enough new to the table to be an enticing read.

Across the multiverse, Eternia lies at the center of every universe with He-Man as a force of absolute good. That is, except for the one Anti-Eternia, where a dark image of He-Man is created. This anti-He-Man takes off across the multiverse to steal the power from all other Castle Greyskulls in the multiverse, all the while killing the heroes who defend them. Now, it’s up to a rag-tag team of surviving He-Men to band together and stop this villain from gaining control of the entire multiverse! 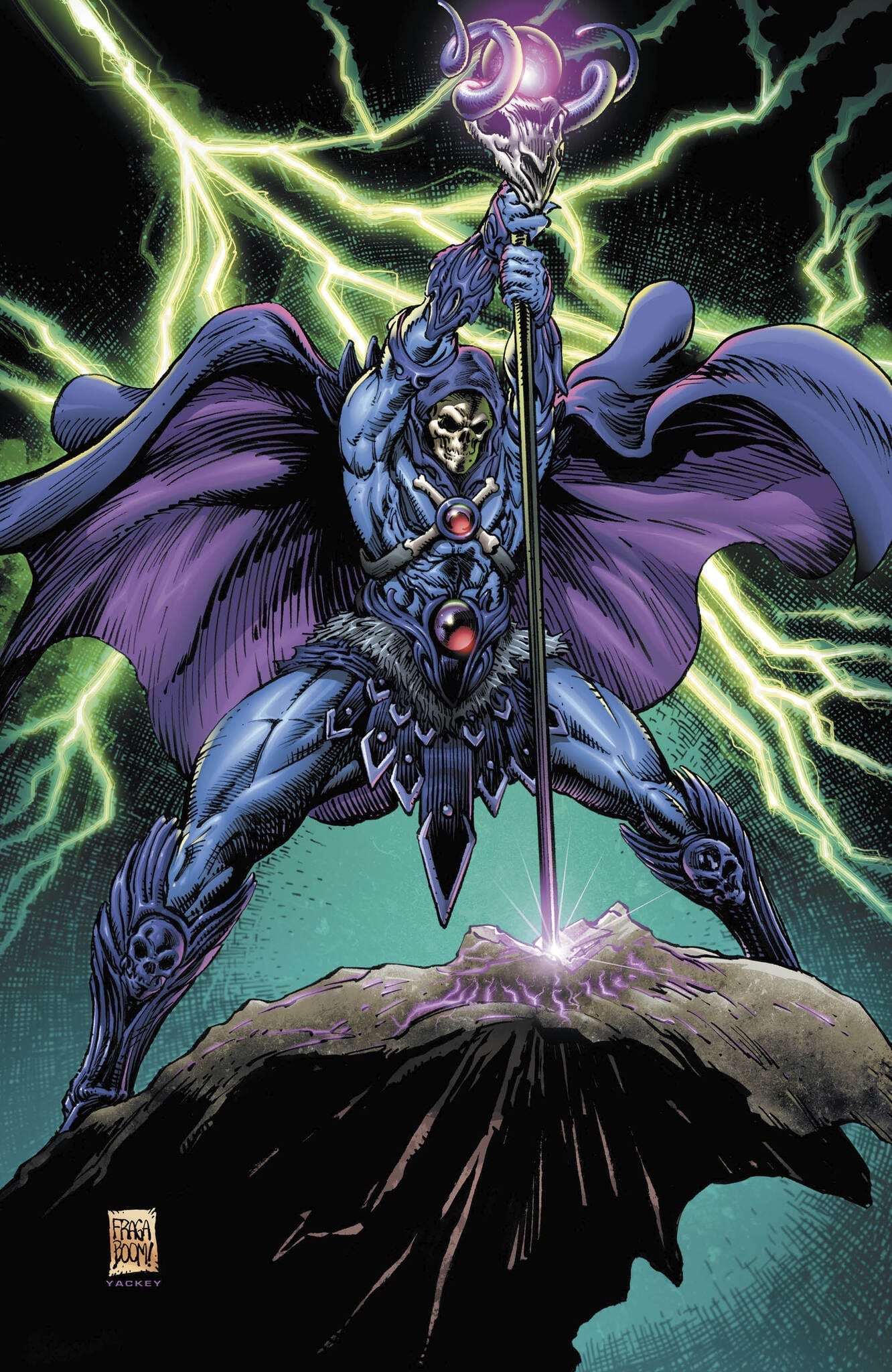 If there’s one thing writer Tim Seeley knows how to do, it’s make a story that’s a blast to read. The script behind this first issue of “He-Man” is full of exciting twists, balanced pacing and perfect dialogue for this sort of book. The reveals of new characters and locations all come across as wondrous and, frankly, cool as hell. Any brief moments of exposition are delivered in a way that feels natural and necessary, and as such they don’t effect the speedy pacing of the issue. The dialogue itself feels like classic He-Man, but it never gets too campy. It’s a fine line that Seeley balances here. Let’s face it though, any issue that opens with Skeletor’s evil laughter is an absolute winner. Sure, the whole “someone is taking over the multiverse” trope has indeed been done to death, but getting to see it done in a new He-Man comic is too much of a treat for it to be a major critique. This is an issue that neatly accomplishes a lot of story in the span of only 20 pages. 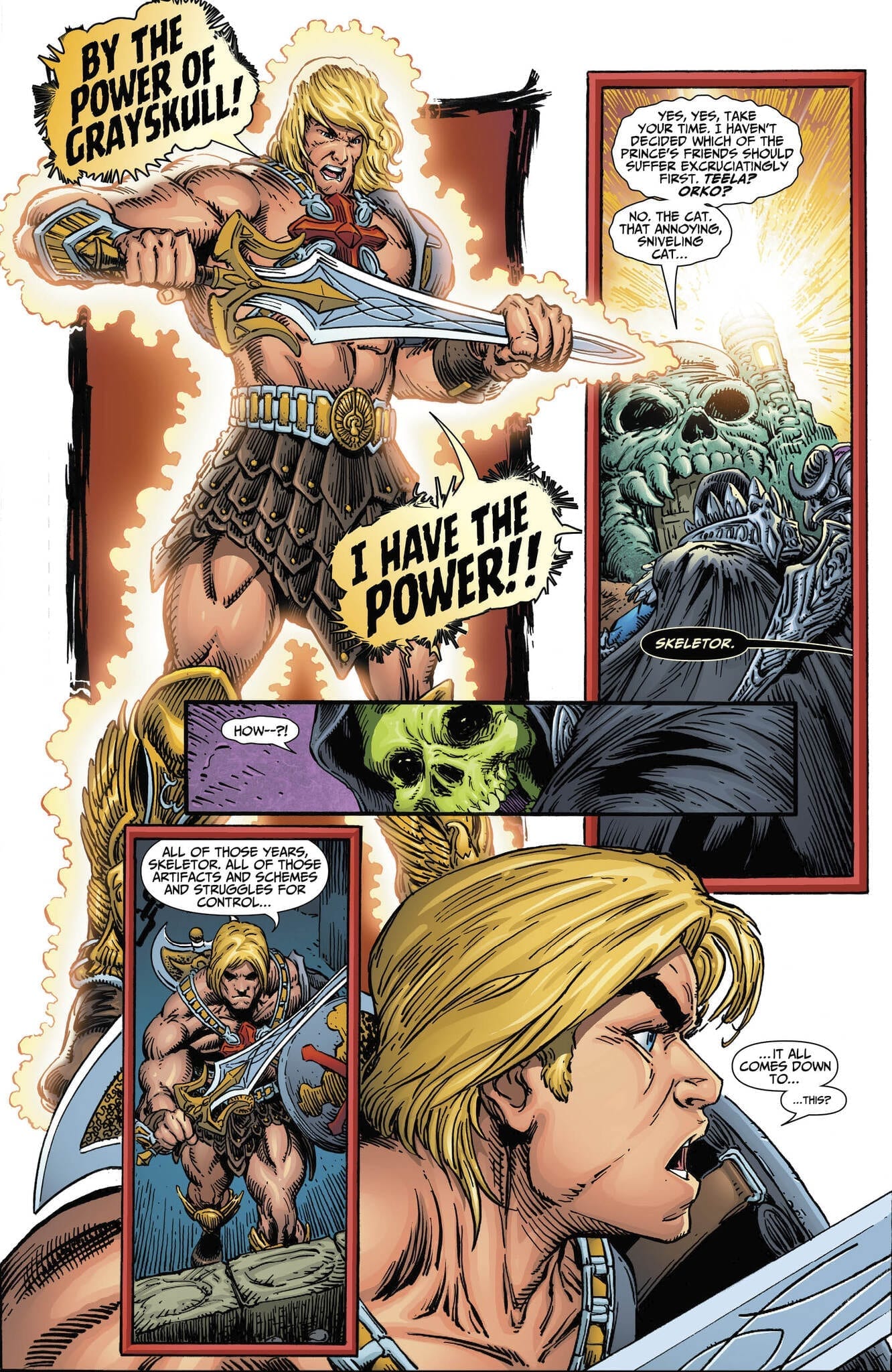 Any long-time comic fan understands how important the right art is to a proper sword & sorcery series. Fortunately, Dan Fraga‘s pencils and Richard Friend’s inks create a style reminiscent of the classic designs of the 70’s and 80’s while still making it fit for a He-Man story. Fraga’s penciling is indicative of the 90’s musclebound character art that he cut his teeth on, but it’s sharpened here to just the reasonable amount of over-the-top. Fraga draws a fantastic He-Man, as well as an excellent amount of detail to the world(s) that the characters inhabit. Richard Friend’s inks give excellent definition and depth to everything from He-Man’s absurd musculature to the bolts of magic Skeletor lobs at his nemesis. The comic looks like someone dug up an issue from the 1980’s, and you wouldn’t want it any other way.

What sells the look of this new He-Man comic just as much as Fraga and Friend’s art is Matt Yackey‘s top-notch coloring. The color choices in this issue look like a toy commercial and damn does it look fantastic. Characters are perfectly matched to their classic cartoon versions, but with the visual pop of modern techniques. Everything from blobs of projectile sorcery to drawings of the multiverse are given the neon-sheen of old-school color palates that have apparently aged like wine under Yackey’s supervision. If you came for Seeley’s take on the classic character or for Fraga’s artistic interpretation, you’ll stay for Yackey’s incredible colors. 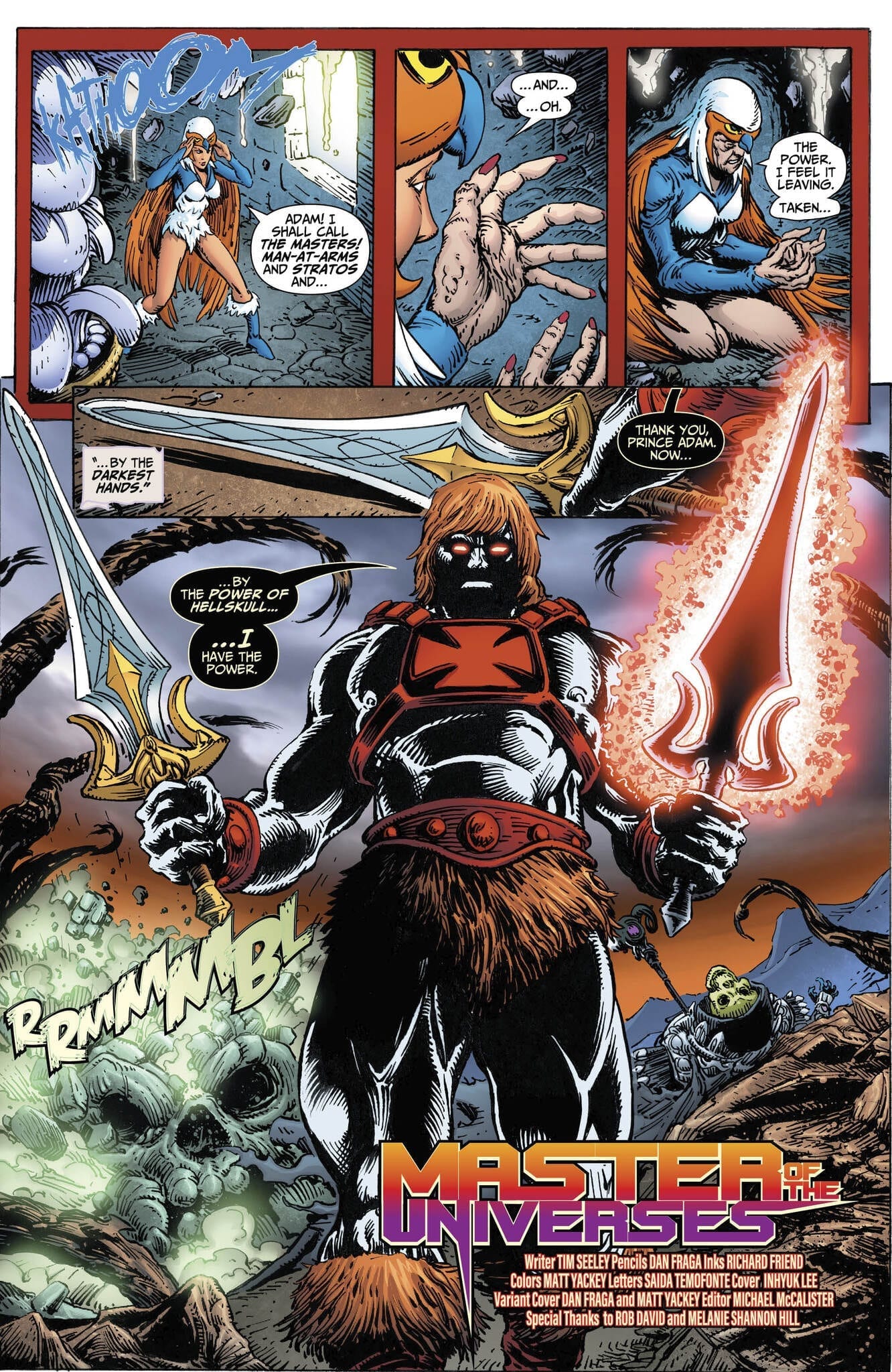 “He-Man and the Masters of the Multiverse #1” is a fantastic start to a new mini-series featuring Eternia’s massive cast of heroes and villains. The pages within bring to life enough classic material for old fans to get a kick out of, but an intriguing enough premise to tide over newer fans who may be more unfamiliar with the characters. Tim Seeley’s script works in conjunction with the talents of an outstanding art team to make this a blast to read. Whether you’re a long time fan of the heroes of Castle Greyskull or a first-time observer, this issue is a worthy pick from your local comic shop on 11/20.

"Masters of the Multiverse #1" is a sharply written and skillfully drawn return to the world of He-Man, with plenty of new twists and old references.Review: Castle Grayskull Grows Corrupt in HE-MAN: MASTERS OF THE MULTIVERSE #1