Review: BOOKS OF MAGIC #13—Can Tim Fix His Crumbling Relationships?

BOOKS OF MAGIC #13, available in stores Wednesday, October 23rd, brings the focus back to one of the main themes within this series: relationships. Writer Kat Howard hones in on Timothy Hunter and Ellie, separately, as they try to fix the damage the world of magic has wrought upon their personal lives. For Tim, the only clear answer involves literally repairing the magical bonds keeping his father from full consciousness; for Ellie, the best course of action requires her to alert the authorities.

These two former friends’ paths continue to diverge, but it’s only a matter of time before their courses collide once again.

In a fit of desperation, Tim uses his inventive side to create a device that would allow him to examine the exact magical spells bonding his father. This item is worn over the eye and function almost like x-ray glasses—the sheer fact that a novice wizard like himself could craft such a device in an afternoon is nothing short of amazing. 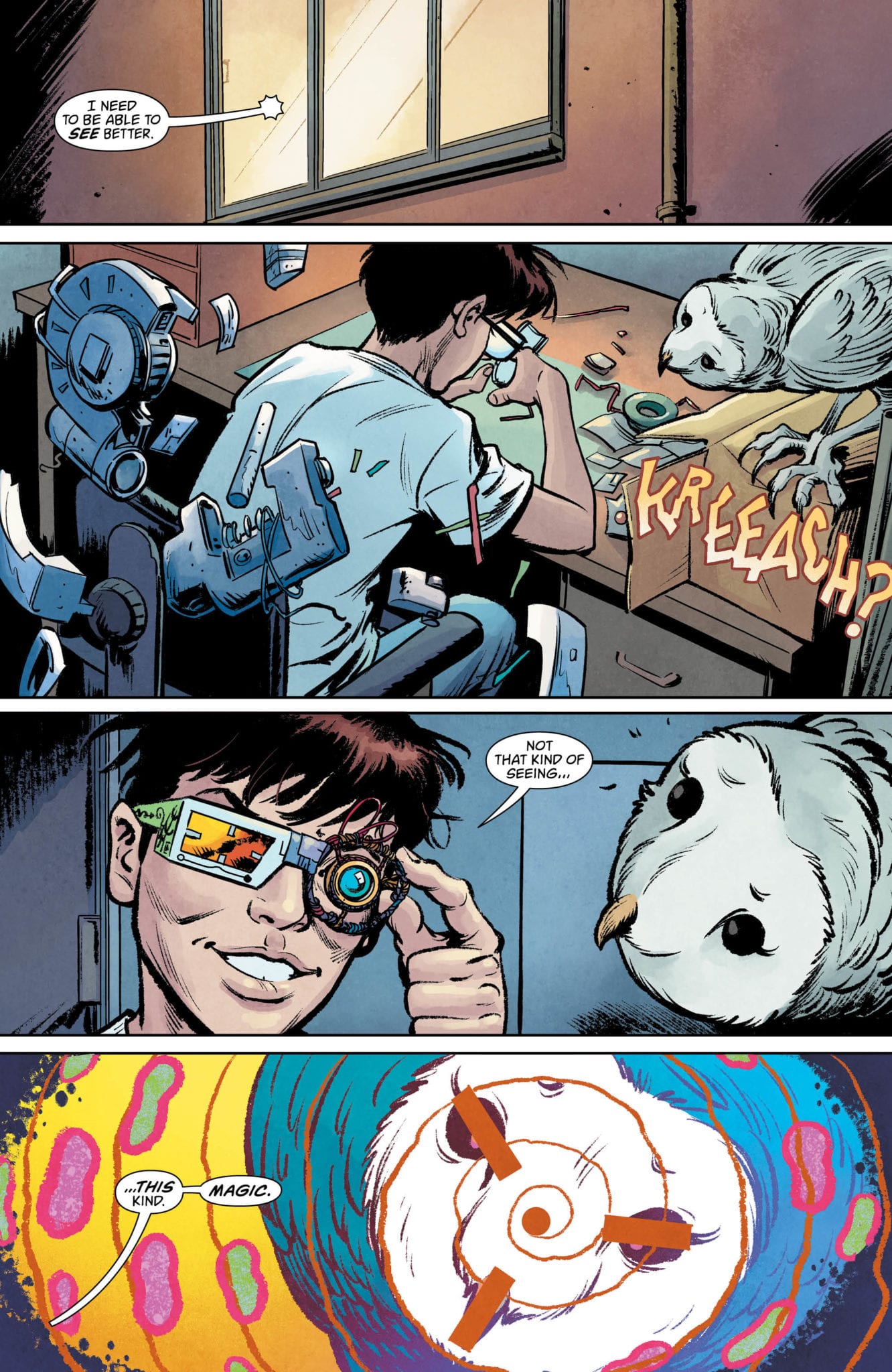 But Tim refuses to dwell in the success of his accomplishment and immediately tests the device on the older man. As expected, most of the spells surrounding him are Tim’s own doing, adding more weight to the already guilt-ridden boy. He throws all caution to the wind and attempts to sever the magical bonds with his screwdriver wand, but to no avail.

What Howard does next is quite surprising, given the nature of her angsty protagonist. Instead of having him attempt to “fix” the situation as usual, she has Tim opt to spend some quality time with his father. It’s as if the boy’s realized no amount of repair in a relationship can occur without quality time between both parties. Sometimes, simply “being” with someone will heal more than a magical “fix” ever could. And, amazingly, Tim’s magical bonds begin to fade away as his father slowly remembers all the time spent with his son over the years.

But not all is fine within Tim’s web of relationships; Ellie is still traumatized after seeing him use magic to seemingly kill Mr. Davies last issue. Afraid for her life and the lives of others at their school, she reports to an investigator in the hopes they will restrain Tim before something else horrible happens. But there’s more to this investigator that meets the eye, and she appears to have further plans for the wizard boy. 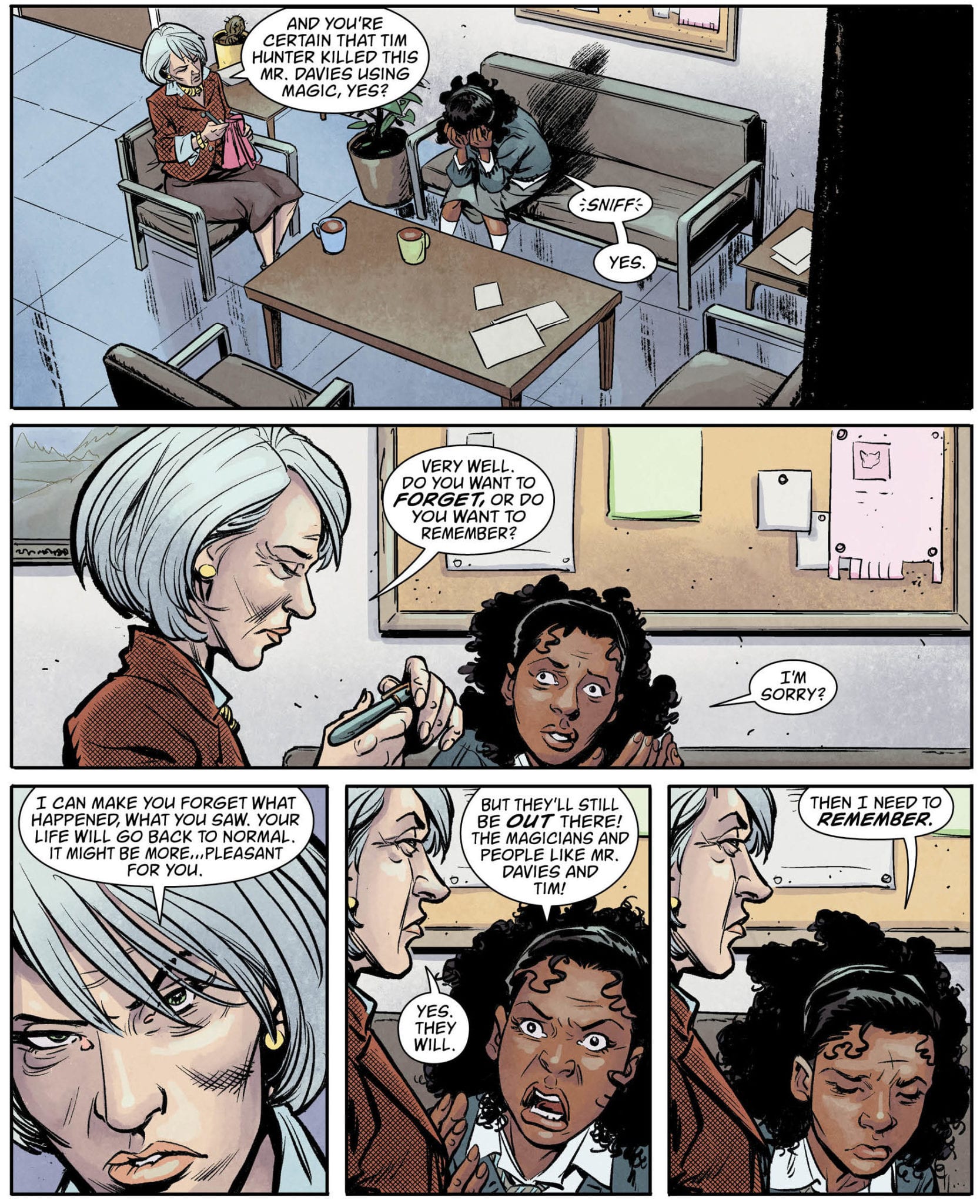 The artwork within BOOKS OF MAGIC # is incredibly unique, even for this fantasy series.  Penciler Tom Fowler, inker Craig Taillefer, and colorist Jordan Boyd alternate between a standard view of Tim’s world and the “magic vision” granted by his device, alternating between the bland colors of the London streets to the bright colors of magical elements brilliantly highlight the differences between worlds. And letterer Todd Klein, with carefully place dialogue bubbles, allow the writing to guide readers between these two “views” of reality with little confusion.

Kai Carpenter’s cover art depicts Tim and his trusted owl Yo-yo staring out into the distance, possibly preparing for new challenges. This shows readers that despite the evil Davies’ demise, trouble lies not far behind.

BOOKS OF MAGIC #13 gives us a look at Tim’s relationships that have been damaged due to his wizard life, but all hope is not lost. We’re treated to glimpses of redemption and repair through the quiet moments between our hero and his father. But can the harm done to Ellie be undone as well?

Did you agree with Ellie’s decision to encourage the authorities to arrest Tim? Let us know in the comments below!

Review: BOOKS OF MAGIC #13—Can Tim Fix His Crumbling Relationships?BOOKS OF MAGIC #13, available in stores Wednesday, October 23rd, brings the focus back to one of the main themes within this series: relationships. Writer Kat Howard hones in on Timothy Hunter and Ellie, separately, as they try to fix the damage the world of magic has wrought upon their personal lives.