Continuing the legacy of one of the greatest and most influential science fiction stories of all time is no simple feat. Luckily, writers Michael Green and Mike Johnson and artist Andres Guinaldo seem more than up top the task with the stellar “Blade Runner 2029” #1. This sequel to both the original Ridley Scott film and the Blade Runner 2019 series from Titan Comics opens up with a chapter that perfectly encapsulates the original cyberpunk look and feel of this world while also maintaining the tone and emotional center that has always made Blade Runner so important. With colors by Marco Lesko and letters from Jim Campbell, this is a must-buy for fans of the original film.

“It is 2029, and Blade Runner Ash continues to hunt the streets of the rain-
soaked dystopian world of Los Angeles for renegade Replicants, but this time she’s
trying to protect as many as she can find.” 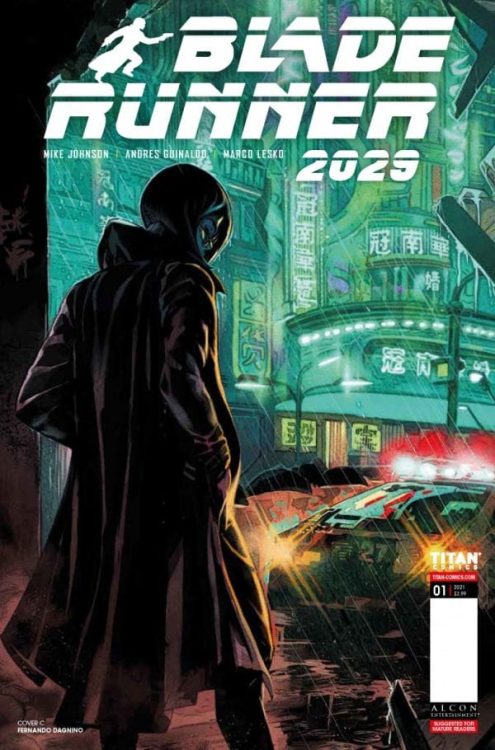 Stories set in Blade Runner’s world require the kind of narratively subtle and tonally rich storytelling techniques that make the original film and cyberpunk as a whole so effective in its messaging. Fortunately for “Blade Runner 2029” #1, screenwriter Michael Green (who worked on Blade Runner 2049) and Mike Johnson are clearly up to the task of telling great stories that properly continue the artistic legacy of this sci-fi universe. “2029” has the narrative stylings of a noir story blended with a desperate tale of survival; for both the people living in the product of late-era capitalism that is Neo- L.A., as well as the replicants who are running and hiding to stay alive. This comic is a follow-up to the events of the Blade Runner 2019 comic series, but don’t let that put you off of reading this if you haven’t read the former. Green and Johnson immediately set about creating a sense of place and character for this particular story and Ash as a protagonist without needing to read the previous series. The focus of Ash’s journey and her place in this cyberpunk world is set upon from the go with a quick flashback that sets up how she has changed from 2019 to now and how her story continues the themes that Blade Runner is so well-known for. In all honesty, Ash is very reminiscent of Deckard, the iconic protagonist of the original film. Maybe that’s what this story needs for its message to work, though. In terms of what “2029” deals with, it feels like a logical stepping stone after what Deckard experiences in the film. Ash’s saving and freeing of replicants instead of retiring them is logically what Deckard would have done (and did, if 2049 is any indicator). The plot’s pacing is methodical and smart, allowing each scene to breathe and give every moment weight. The dialogue and narration are naturalistic and, of course, slightly noir styled. The reading experience of “2029” #1 is a fantastically thematic return to this world. 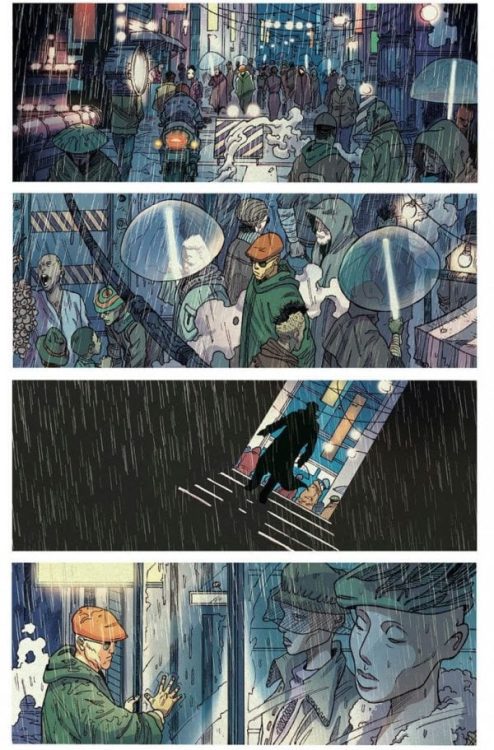 Replicating (no pun intended) the iconic visual style of Ridley Scott’s film should be the main focus of any artist tasked with recreating the world of Blade Runner. Artist Andres Guinaldo has proven himself more than up to the task on “Blade Runner 2029” #1, displaying a style that is equal parts character animation-focused and cyberpunk architecture. Guinaldo utilizes a panel direction that pays tribute to the original film’s aesthetic and direction while telling a story in a way that is only achievable in the comics medium. Each panel sings with the dreary and rainy atmosphere of Neo-L.A. and the desperation – and determination – that each person, replicant or not, survives with. Unlike the memories of Roy Batty, however, these moments will remain like melancholy art pieces in the pages of this comic for as long as the reader keeps it on the page. This experience is given its dimension and color by Marco Lesko, who utilizes a palette straight out of the original film’s cinematography. The characters’ colors and features both blend in and simultaneously stand out from the rest of the dank blue-grey environmental and architectural coloring. The lights coming off of police spinners glow with a hazy effect pulled right out of 1982, and light refracts off of raindrops in a show of immense detail. Jim Campbell’s letters offer a smooth reading experience with an angled, large font that’s a mix of classical and a rough-hewn modern style. The visual experience of this comic is fantastic and very much worthy of the Blade Runner legacy. 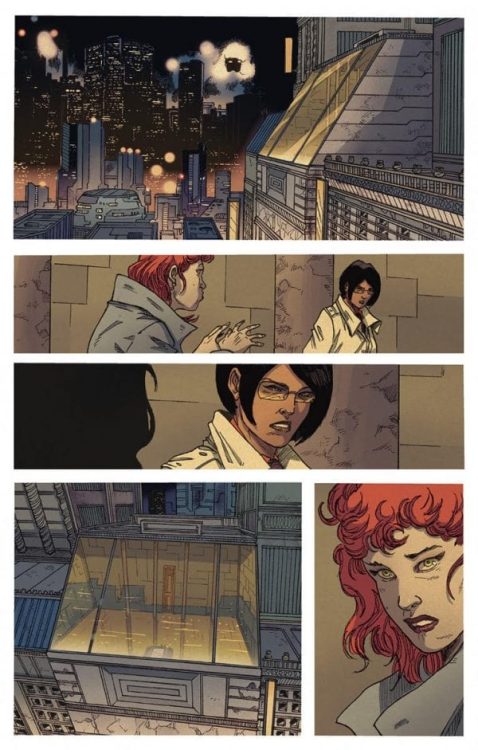 “Blade Runner 2029” #1 is a poignant start to this next chapter of the Blade Runner story in the comics medium. Michael Green and Mike Johnson pen a focused script that brings all of the thematic issues Blade Runner is known for to the comics medium in stellar fashion. Andres Guinaldo and Marco Lesko’s visuals bring Neo-L.A. to life in all of its polluted uncontrolled capitalist glory. This will be a must-read for Blade Runner and cyberpunk fans everywhere, so be sure to grab this one from your local comic shop on 12/16!

A follow-up to both the original film and the Blade Runner 2019 series that drops you right back into this dingy cyberpunk world without missing a beat.Review: BLADE RUNNER 2029 #1 Continues A Legacy