Batman: Pennyworth RIP, out this week from DC Comics, takes on one of the biggest questions of Tom King’s recent run on Batman: is Alfred really gone for good?

I’ve heard it said that, in comics, no one’s ever truly dead unless they’re “Uncle Ben dead.” A character can always come back unless that individual’s death proves indispensable to a major character’s motivation. Of course, with the return of Thomas Wayne, it’s apparent that even this rule can be broken.

I expect we’ll see Alfred Pennyworth sometime in the future. Regardless, DC felt the need to give Bruce’s surrogate father a fitting, if less-than-optimistic sendoff. 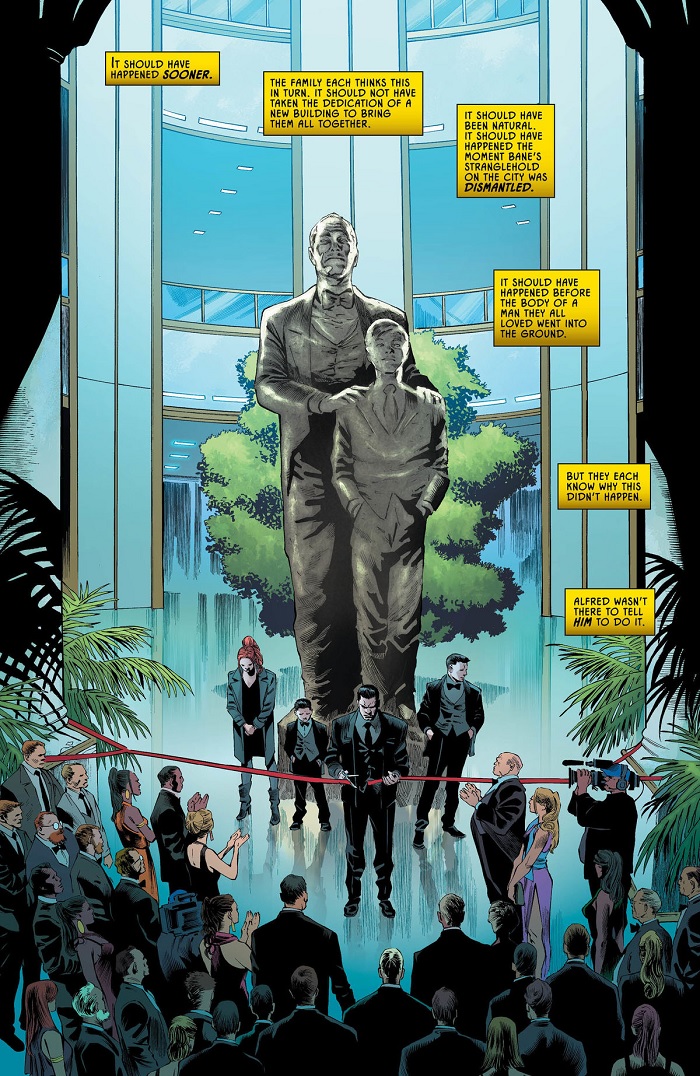 We see each member of the Bat Family relay their best memories of Alfred, with the main story serving as a framing device. We see each character manage their grief at Alfred’s loss in a different manner. For some, it’s anger, while others are colder and more detached. In every case, though, there’s a note of definite tension, laying the groundwork for further conflict in ongoing Bat titles.

The book is dialogue-dense, with each character recalling their best memories of Alfred. While there are some touching points, it doesn’t always deliver on the emotional impact for which the writers were going. At the same time, the wordiness takes a toll on the book’s pacing throughout. The result is that some of the characters’ interactions feel somewhat hollow, even histrionic at points, like Damian’s exit after sharing his tale.

More than anything, Batman: Pennyworth RIP underscores Alfred’s role as the glue that held this combative clan together. He was the cohesive element that mitigated the worst dynamics of the Bat Family’s disparate and testy relationships. With him gone, though, the members immediately begin to pull apart.

Probably the book’s greatest strength is what it means for the characters going forward. Their individual traumas and personalities grind against one another, and old wounds open…this time, though, there’s no Alfred to tend to them. It doesn’t bode well for the future of the family. 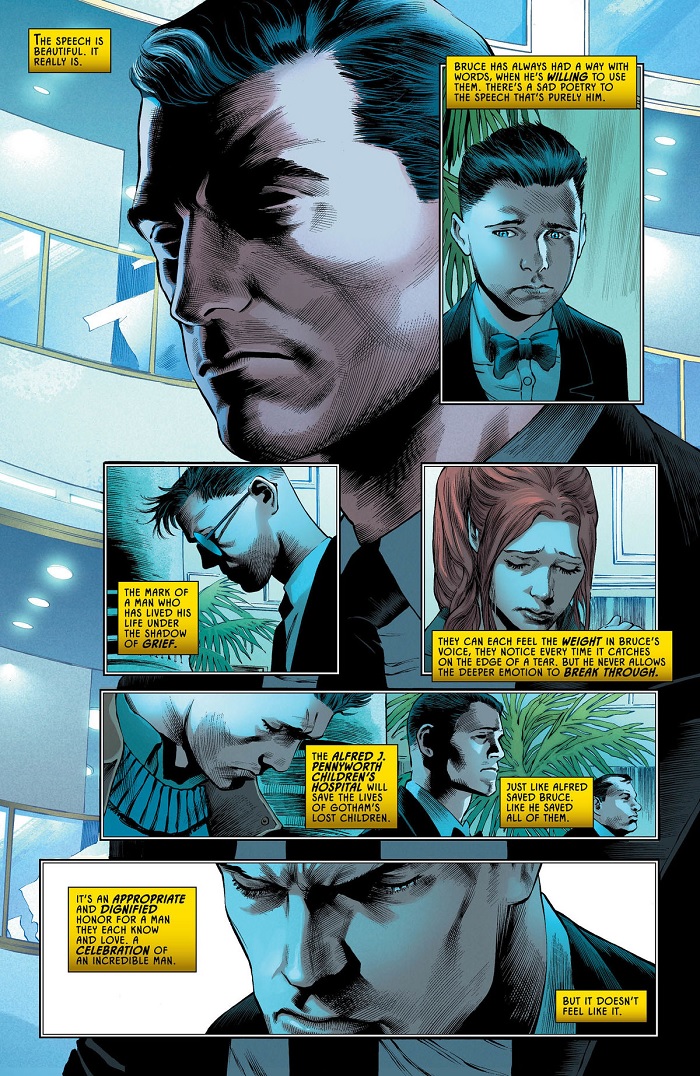 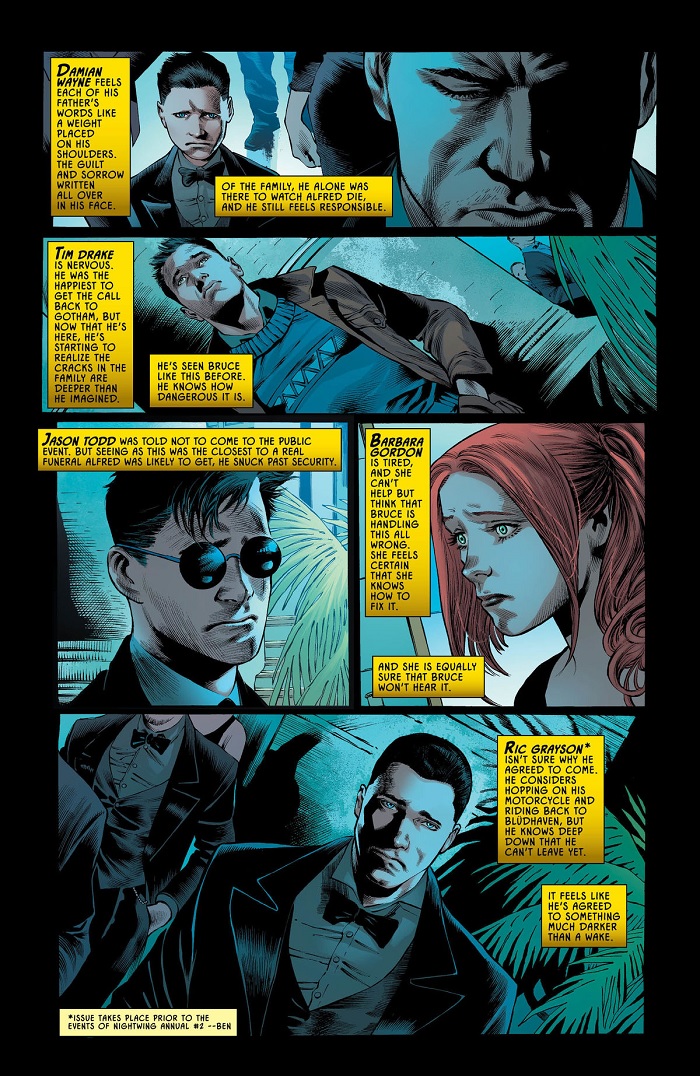 DC emptied the benches calling on artists for Batman: Pennyworth RIP. The book credits a team of ten different artists and colorists who contributed pages. As a result, each of the different vignettes has a unique style and aesthetic, and these tend to complement the stories well.

The pages in the main story are very stylish, nailing the mood of the book. Character designs within the framing story are sharp and angular, and there’s a definite sense of gloom hanging over these scenes that suits the tone.

Some of the pages feel a bit cluttered in the side stories, and don’t land the story beat every time, though. The pages feel very busy at points, packed with panels and speech bubbles, which slows the pace. It likely would have been more effective to stretch this book to 64 pages, rather than the 48 allotted.

The colors also play a major role in selling the mood of the piece. Our main story is streaked with icy blues, highlighting the depressive emotional tone. In contrast, our flashback sequences are brought to life with more vivid, earthy tones. 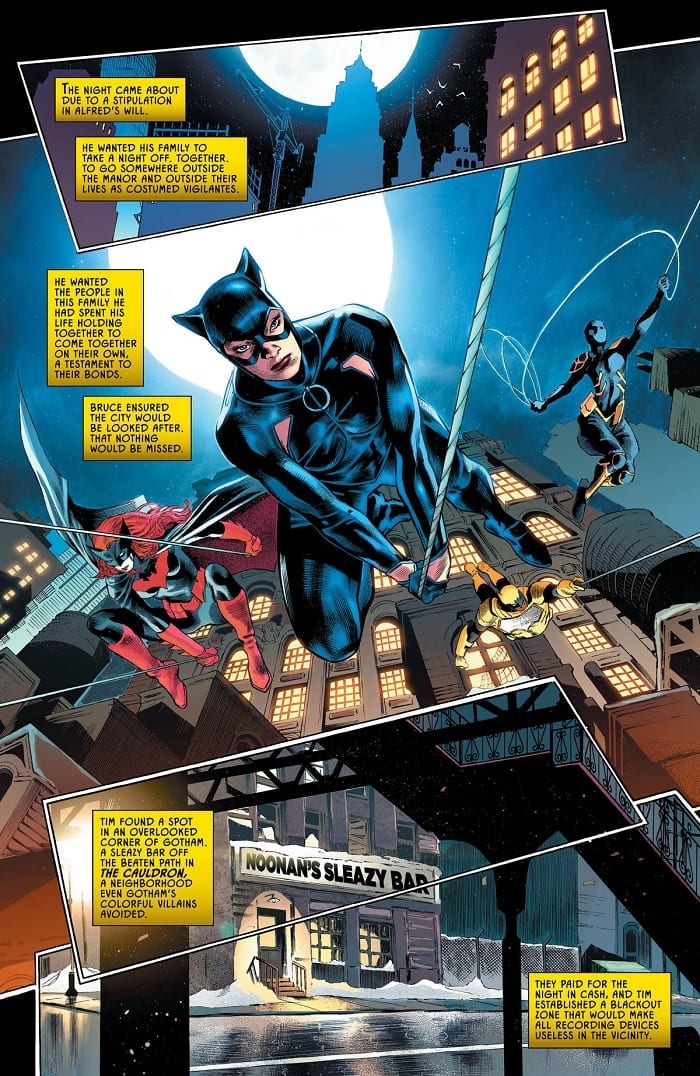 Batman: Pennyworth RIP may not be the definitive sendoff for Alfred that DC was hoping for. That said, it’s entertaining and, at times, even touching. It’s worth picking up if you’re a Bat Family aficionado.

3809
Find out how to get the
Monkeys Fighting Robots magazine!