Review: BATMAN CATWOMAN #3 Daughter of the Bat or the Cat?

DC Comics’ Batman Catwoman #3 includes the exciting addition of a fan favorite character, Helena Wayne. Helena, AKA Huntress, is the child of Selina and Bruce. But writer Tom King, artist Clay Mann, colorist Tomeu Morey, and letterer Clayton Cowles make us ask a simple question: whose daughter is she really? This isn’t to say she’s not biologically Selina and Bruce’s daughter. The creative team is instead making us look closely at the character to see who she takes after the most.

As is so often the case, King writes lines that are fantastically full of subtext. We follow Selina, both in the future and in the present day, as she deals with her growing connection to the Joker. In one timeline, Selina is trying to figure out how to keep Bruce in the dark. In bed with the “World’s Greatest Detective,” King has her evading and distracting Bruce like a pro. But with Helena on her tail, in the future timeline, things aren’t quite so clear. Sure, Selina is still evasive and full of distractions, but she’s no longer dealing with someone who has point blank questions for her. Instead, she’s dealing with her own daughter. A woman who may be just as underhanded and careful as her mother, with all the moral fortitude of her father. King turns Helena Wayne into a dangerous mix of her parents. A tireless righter of wrongs with all the subtlety of a thief in the night. 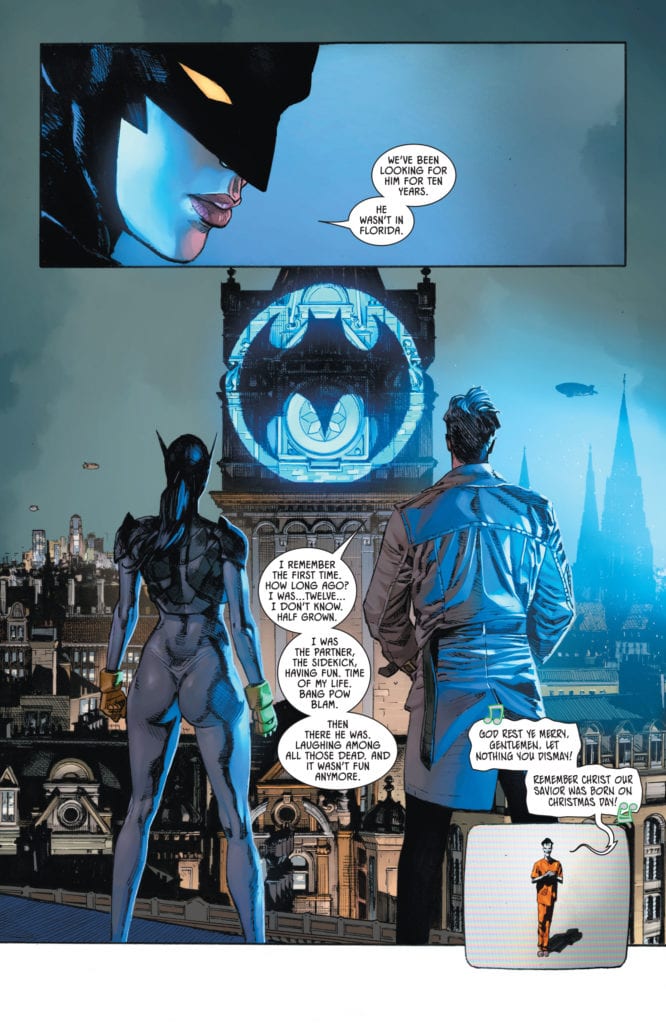 Clay Mann is the king of subtlety in this chapter as well. Whenever he can pull back, leaving the details a little obscured, he does. We see a murder in an empty flat. Except all we actually see is a hand and blood streaks on the window, as the killer stands above their victim. At one point, Selina talks with the Joker. Mann depicts the Joker in a shadowy setting. All we see is his disembodied smile. Mann knows that we’ll be more frightened by what we can’t see than by what we can.

While Mann’s art is fantastic in this issue, it does occasionally feel a little oversexualized. In one of Selina’s fights, she’s in her underwear. Her pink top seems to come apart more and more with each passing panel. While it doesn’t detract from his other strengths, it’s a small moment that feels a little unnecessary.

Morey makes moments of extreme tension look warm and inviting, and makes spooky moments look calm and serene. It’s a brilliant approach. Every moment is compounded by the fact that the colorist almost seems to be “ignoring the tone.” But Morey isn’t. Morey is playing against every moment. We can feel the tension in the room because the characters seem to be ignoring it. And when we’re witnessing a grizzly murder, we’re disturbed by how beautiful it all looks. Morey shows us the peacefulness in fights to the death and fear in intimacy. No moment looks like it “should.” Morey rises above clichés and delivers scenes that pack a devastating punch.

Cowles does a fantastic job of making some of the dialogue feel calm or low effort. There’s something about a word balloon that goes downward from a character’s face that makes it feel nonchalant. It’s as though these words just fall out of their mouths. So when Helena and Selina talk at the dinner table, their tones seem quite different. Selina’s words extend above her head. She’s talking purposefully, deliberately. Helena responds without seeming emotionally invested. Each of her lines either hangs in the air, right next to her head, or stretches down below her. Her word balloons rarely touch the top of the panel. Then, finally, she acts like her father would. She asks a straight forward question. “Mother. Is everything all right?” Her words graze the top of the panel. It’s a simple, slight shift in the dynamic, but it’s in these subtleties that this creative team is telling their story. 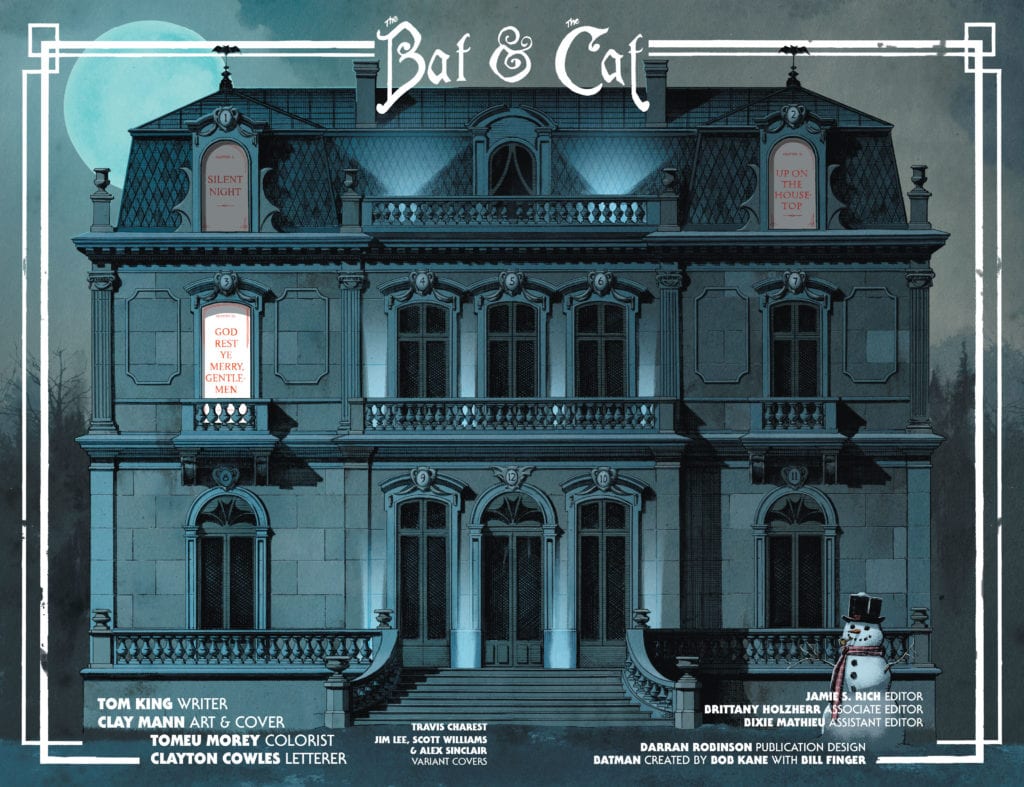 DC Comics’ Batman Catwoman continues to humanize a mythos that feels huge. King, Mann, Morey and Cowles tell a story of heroism that is tainted by the grit of our day-to-day ethics. It’s not black and white, it’s not right and wrong: it’s complicated and messy. And with every new issue, it promises to get messier. Pick up Batman Catwoman #3, out from DC Comics February 16th, at a comic shop near you!

DC Comics' BATMAN CATWOMAN continues to humanize a mythos that feels huge. King, Mann, Morey and Cowles tell a story of heroism that is tainted by the grit of our day-to-day ethics. It's not black and white, it's not right and wrong: it's complicated and messy. And with every new issue, it promises to get messier.Review: BATMAN CATWOMAN #3 Daughter of the Bat or the Cat?