The end to DC Comics’ Batman/Catwoman isn’t flashy or exciting. It doesn’t seek to wow or to leave you on the edge of your seat. No, Batman/Catwoman #12 is a simple ending. Writer Tom King, artist Clay Mann, colorist Tomeu Morey, and letterer Clayton Cowles bring this epic in for a quiet landing. They find beauty in the commonplace moments in the long romance of the Bat and the Cat.

Batman/Catwoman has always been about the juxtaposition between the mundane and the bombastic. We focus just as much – perhaps even more so – on the home life of our protagonists as we do on the fight sequences and supervillains. King spends the majority of this issue in the intimate, out-of-costume moments between these characters. Even when Batman is in the cowl and trying to put down an enemy, the spotlight is on Selina’s casual discussion with him from the sidelines. And though King allows himself a storytelling sin – he presses the “undo button” on a development from earlier in the series in a way that’s mischievous and self-aware – he still uses his lyricism, his humor, and his incredible ability to elevate big moments by understating them to bring us a moving and satisfying ending. 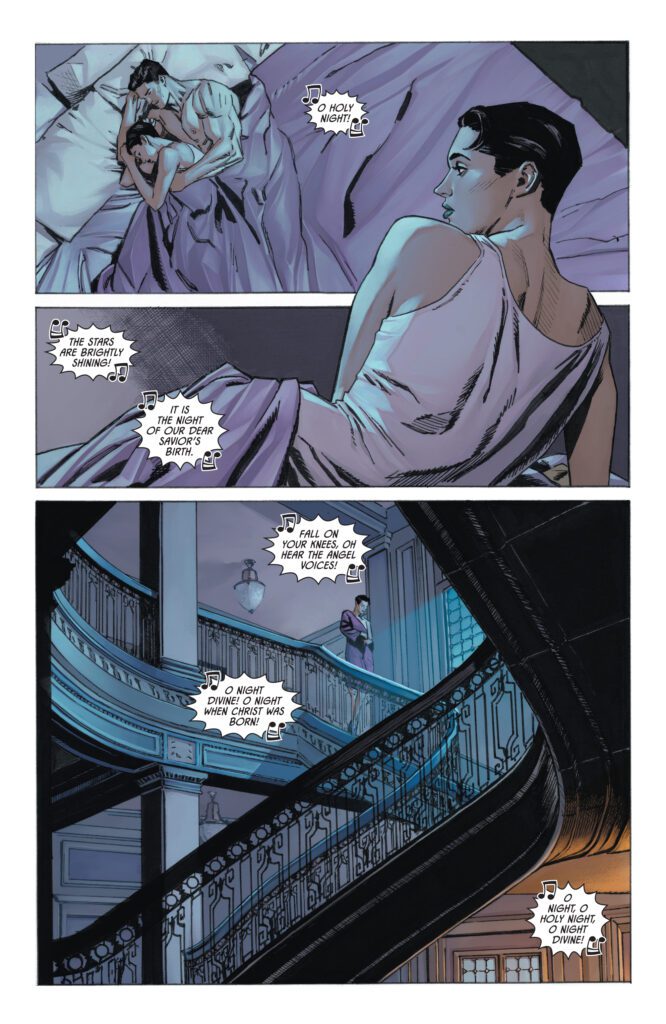 Mann’s art is stunning. There’s a raw sexuality to it. As Bruce and Selina stand at the altar, they look good and they know it. But there’s a playfulness to the art as well. As Selina and Helena fight at the dinner table, Mann depicts a cat chasing a mouse through the gutters of these pages. It’s a metaphorical representation of the undercurrents of the scene. At the end of one of these pages, instead of having a final panel, Mann has the dinner table jut into the bottom of the page. It stretches far and Helena sits at the end of it, looking small and distant. That’s almost certainly exactly how she feels in that moment, too. Mann adds layers upon layers to the storytelling, all while having fun through his page layouts and panel borders.

Generally speaking, Batman/Catwoman #12 is a comic that refuses to be dark. Even in the tense conversations between Selina and Helena, set against a grey and black backdrop, we get gutters that are colored to look like bright green wrapping paper. Similarly, Bruce and Selina dress in all black for a special occasion. They look chic and enigmatic, but they’re in a scene that’s almost entirely colored in hot pink. The few moments that do come off as dark, though, don’t feel gloomy. Morey makes these scenes feel intimate and candlelit. Ultimately, this is a romance story, and Morey never lets us forget that. 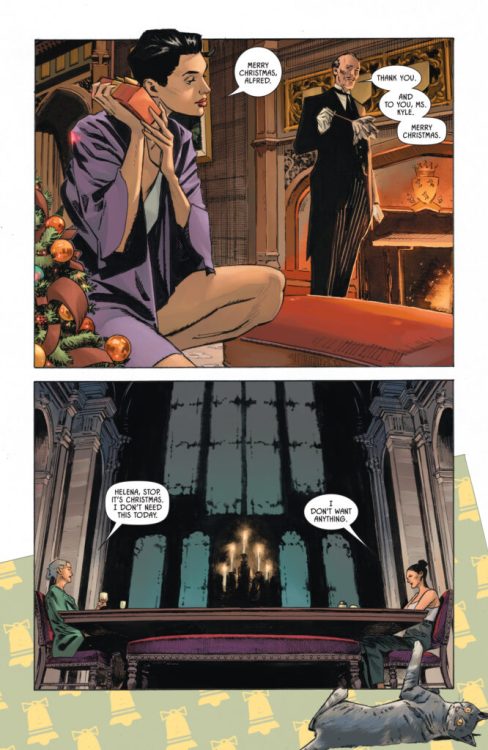 There’s a smoothness to a lot of the dialogue in this issue. Cowles leads you across each page with word balloons that naturally flow into one another. But this rhythm gets interrupted while Batman battles a villain. Our eyes whip from one side of the page to the other to keep up with what’s going on. Cowles has us mimic the movement of Batman being tossed around by his enemy. The following scene shows two people relaxing in the sun. Cowles treats this dialogue completely differently. Our eyes do very little work, often not even needing to move from side to side as the word balloons tumble down in thick columns. Cowles’ knack for making us imitate a character’s motions (or lack thereof) is uncanny.

DC Comics’ Batman/Catwoman #12 doesn’t hit you with dynamic action or dramatic epiphanies. Instead, it leads you so gently to the end of the road you almost forget the journey is over. This creative team has delivered a gorgeous and nuanced final chapter that fits perfectly into this series that has always been more interested in the mundane than in superheroics. Batman/Catwoman #12 is out from DC Comics June 28th at a comic shop near you!

DC Comics' BATMAN/CATWOMAN #12 doesn't hit you with dynamic action or dramatic epiphanies. Instead, it leads you so gently to the end of the road you almost forget the journey is over. This creative team has delivered a gorgeous and nuanced final chapter that fits perfectly into this series that has always been more interested in the mundane than in superheroics.Review: BATMAN/CATWOMAN #12 - Beauty in the Mundane