This is it: the showdown everyone’s been waiting for. Batman and Bane square off determine, once and for all, who truly runs the streets of Gotham in Batman #82, out this week from DC Comics.

The two agree to a straight-up, bare-knuckle fight. No utility belt, to Venom…nothing. But of course, there’s much more going on here. The balance of power shifts constantly, keeping readers on the edges of their seats with dynamic, well-paced writing and artwork. 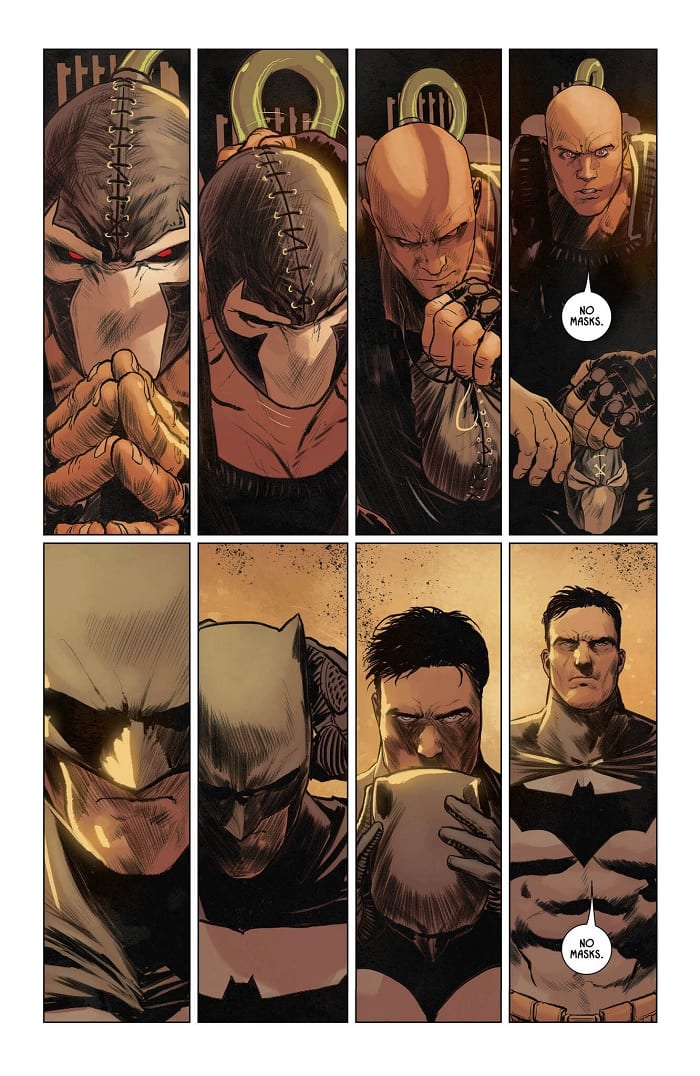 The core of the narrative in Batman #82 is focused on the showdown between Bruce and Bane.

Over the last thirty or so issues of Tom King’s run on the series, we’ve watched as Bruce, Thomas Wayne, Selina, and Bane all jostle to determine who has the upper hand over the others. The balance between these characters shifts constantly. We’re never really sure who’s outwitted the other parties; just when you start to believe one might actually get the drop on another, the tables turn.

King ramps up that teeter-totter dynamic considerably in Batman #82. It seems that, on just about every page, one character upsets another. Such a dynamic narrative could give readers whiplash, but thankfully, King manages to nail the pacing, which makes for gripping storytelling throughout the book.

The writing is tense and engaging. The reader wonders: will Bruce manage to topple Bane? Does he have a plan to contend with his father? Will the story take another dramatic turn? Right up to the last two pages, we’re left unsure about who will ultimately come out on top.

The only point where the writing falls flat is when Bruce and Selina recall they had conversation about their plan to take on Bane. In mid-fight, we have the two characters taunting their opponent in the kind of blasé tone of inane chatter that occasionally slips into King’s work. Other than that, though, it’s great stuff overall. 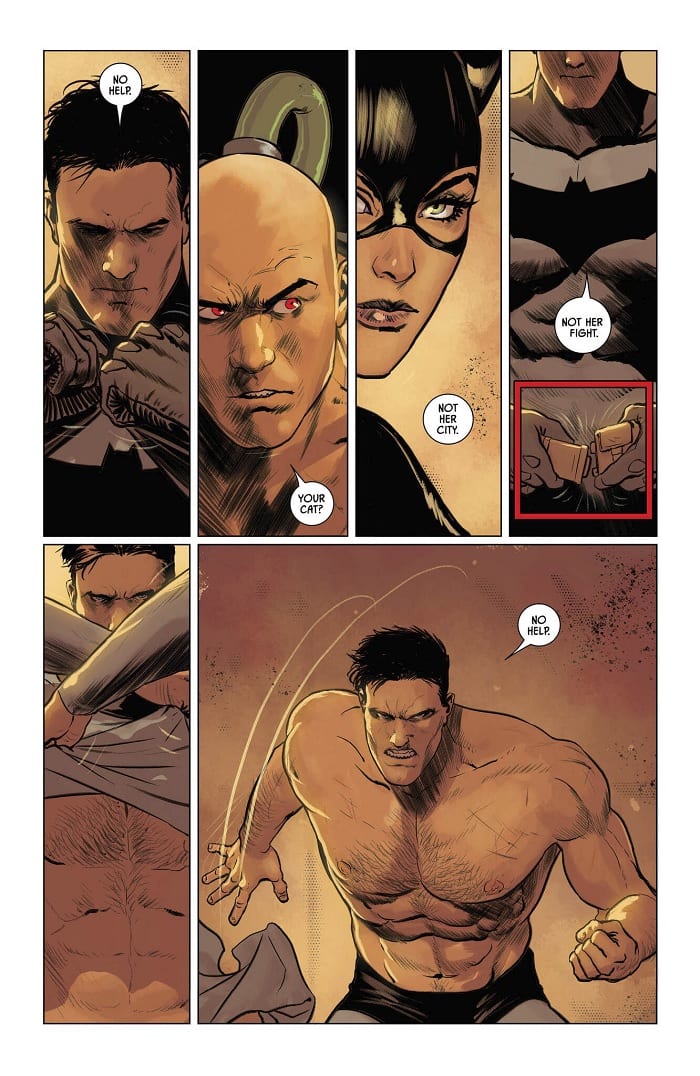 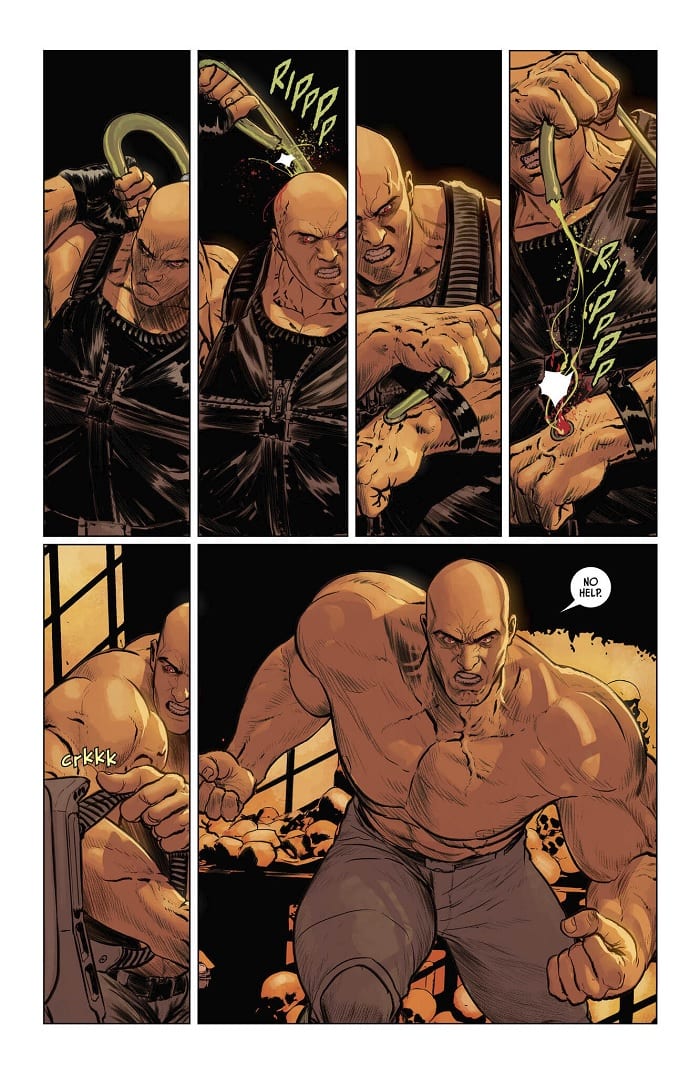 As we see in the preview pages above, artist Mikel Janin preserves a sense of symmetry and a continuum of motion through the use of repeated motifs. The artwork throughout Batman #82 is evenly divided into grids. However, Janin still manages to keep things visually engaging and lively from page to page.

In terms of artwork hitting the beats of the story, this is some of the most impressive material we’ve seen on the post-Rebirth run of Batman. The reader feels propelled through the story, compelled from one page to the next. The only points at which things drag slightly are, again, when Bruce and Selina offer their “How I Did It”-esque bit of exposition.

Not to be outdone, colorist Jordie Bellaire also turns in some of her finest work yet on the series with Batman #82. Much of the book has a consistent reddish, yellowy hue. The intensity of the colors increases as the fight progresses, though, shifting to a more intense, fiery tone like the crescendo of a piece of music. It’s tasteful, yet highly-expressive work. 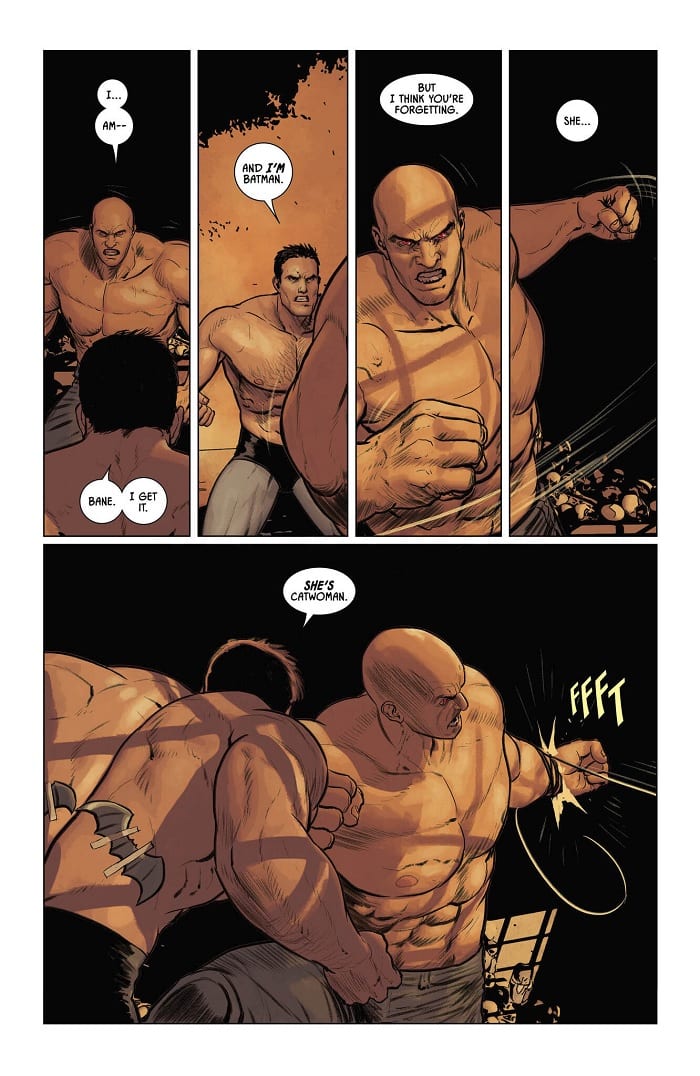 Batman #82 is an excellent, well-paced showcase of storytelling ability through sequential art. Definitely pick this one up.

Review: Bruce & Bane Square-Off in BATMAN #82BATMAN #82 is a tense and captivating read. The book keeps readers guessing about who will come out on top right up until the last two pages, delivering another shocking ending, and all brought to life with fantastic artwork. Not to be missed.