Modern comics all-star Chip Zdarsky (Daredevil, Sex Criminals) teams up with the monstrously talented Jorge Jimenez (Super Sons, Earth 2) to begin a new era for the Dark Knight in Batman #125. Featuring colors by Tomeu Morey and letters by Clayton Cowles, as well as artist Belen Ortega and colorist Luis Guerrero in the backup, this new chapter takes off running with one of the most intense Batman comics in recent memory. With shocking twists, tense mystery, incredible visuals, and an excellent backup story, this fresh starting point for Batman will be a treat for longtime fans and those looking for a place to jump in.

“Bruce Wayne is at a turning point, haunted by dreams of a dark future, while Gotham City billionaires are being gruesomely murdered. With the discovery of an archenemy’s involvement and a tragedy unfolding, the Dark Knight’s nightmares are just beginning.

And in the backup, there’s chaos in Gotham as the underworld fights over one of its crown jewels…and Selina Kyle is caught in the middle. Can she stop the bloodshed and maybe even make a little money in the process?” 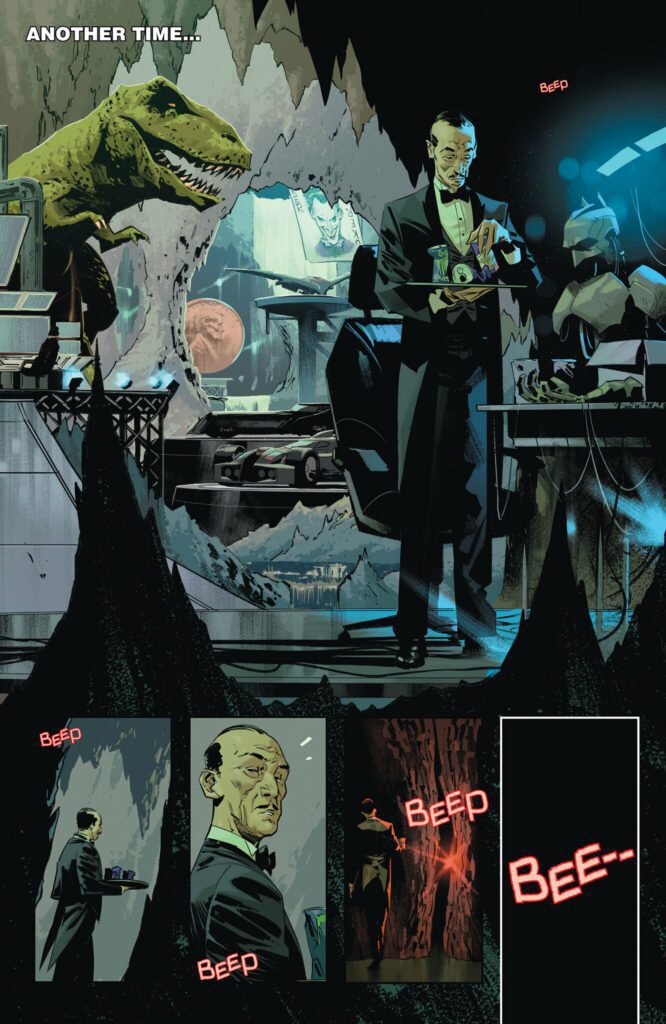 Taking the reigns of both of the Big 2’s major street-level vigilantes, Chip Zdarsky comes over to DC to offer his take on the Caped Crusader in Batman #125. Following up on the story set up by Tom King, James Tynion IV, and Joshua Williamson respectively, Zdarsky interjects some gritty detective work into the current era of The Bat. Despite falling in line directly with the Rebirth and post-Rebirth Bat-story, this issue is still great start point for people who have been out of the loop for awhile, or are even new to Batman comics in general – so long as you know your basics. Zdarsky handles this era of the broke, mansion-less Batman by bringing him back to the bloody-knuckled sleuth he was back in the Snyder/Capullo era. After a long run of major crossovers, family matters, and (great) new character introductions, it’s refreshing to read a Batman comic that uses only the classics while still making everything feel fresh. The central plot, with Bruce tracking down a killer taking out Gotham’s billionaire class, is familiar yet wholly compelling thanks to Zdarsky’s kickass narration and careful mystery writing. This is the most threatening Batman has been in quite some time, putting the fear in criminals with his terrifying ambush tactics, knowledge of human anatomy, and insanely cool one-liners. The moments of quiet contemplation are punctuated by huge twists, great action, and reveals that keep this comic moving at a deliberate yet breakneck pace. Zdarsky looks to be bringing some of the weight and gritty punch of his Daredevil run to Batman, and it pays off brilliantly in this issue.

The backup is every bit as entertaining as the main plot. We’re treated to a Catwoman-focused story taking place after one of the major plot-developments in the central story. Featuring international criminals, robot-lawyers, and a Zdarsky-scripted Selina Kype being as snarky and delightfully cool, this issue’s entire script from main story to backup is an outstanding start tom this new Batman era. 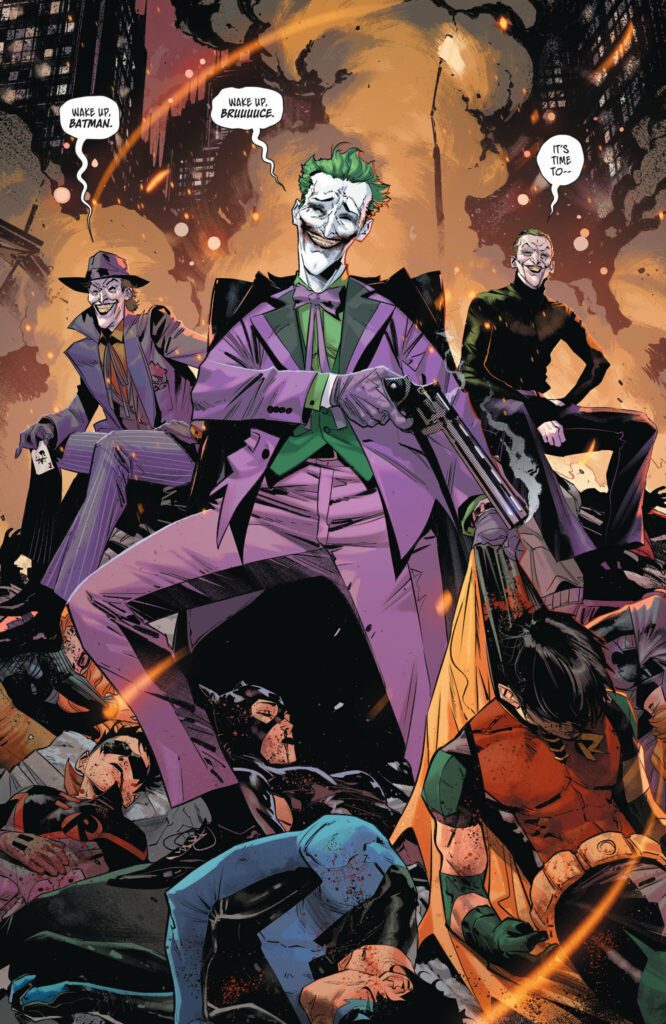 Jorge Jimenez returns to draw the Dark Knight once more in Batman #125, and continues to cement himself as one of the best artists in mainstream comics today. His incredible level of detail, character acting, designs, and composition make this issue of Batman one of the most visually engrossing in recent memory. Jimenez’s usual brand of high-energy super heroics we’ve seen in his work on Super Sons and his prior Batman work has been fine-tuned – at Zdarsky’s request – into a properly dark detective comic. Jimenez drives the story forward with his brand of high-fidelity visuals, ranging from big action moments to tense conversations between Batman and his greatest foes. His work here perfectly captures Zdarsky’s goal of returning Batman to his darker, more intimidating self. There are panels and scenes here that capture the Bats at his most imposing, as he stalks bad guys though the shadows and – in one insanely cool scene – grabs them from the other side of a skyscraper’s window. Jimenez remains a master of composition and framing as well, utilizing blocking to focus on small details and odd angles to craft awesome and memorable panels. There are moments in this issue that are likely to go down as iconic Batman images. Jimenez’s frequent collaborator Tomeu Morey once again kills it in the colors department, with heavy shadows and a vivid, saturated palette that adds a high-production value polish we’ve come to expect from a Batman comic, while still selling the dark Gotham atmosphere.

Belen Ortega’s work on the backup is almost as impressive as Jimenez’s, albeit in different ways. Her more outright animated, digital style is perfect for the less gritty and more outright fun Catwoman story this story will be. Aided by Luis Guerrero’s polished, gorgeous color work, this backup chapter is visually on par with the incredible work in the main issue. Clayton Cowles letters the entirety of Batman #125, and as per usual his work here is as kinetic and thoughtful as every other part of the comic. He utilizes the same font and style of lettering that Batman comics have been using for over a decade now, but with his own artistic twists. The dialogue balloons flow brilliantly thanks to Cowles’s strategic use of bold fonts. His SFX letters are noticeable and effective without taking over the panels. Overall, this is a phenomenally well put together comic from the visual end, and one of the best looking mainstream comics on stands this year. 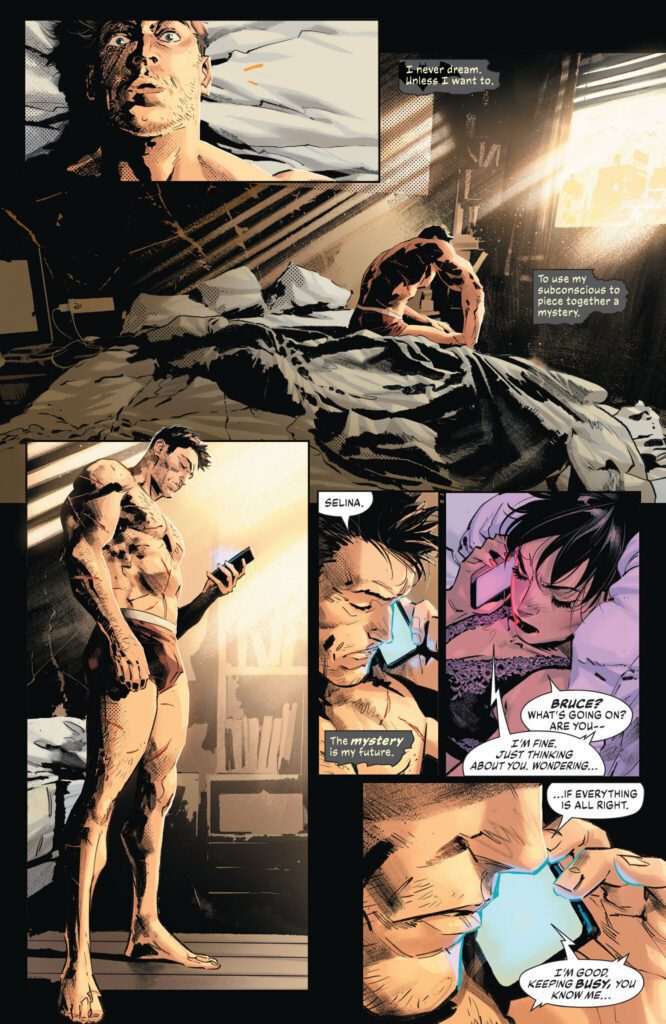 Batman #125 is a tense and gritty start to this new era for the Caped Crusader. Chip Zdarsky pens a script that takes Bruce back to his most intimidating self, while mixing in genuine stakes, compelling conflicts, and absolutely kickass dialogue. The visuals from Jorge Jimenez, Belen Ortega, Tomeu Morey, and Luis Guerrero are astonishingly good, with a book that offers that stunning high-production effort readers are accustomed to while blending perfectly with the grease and grime of Gotham’s criminal underworld. Be sure to grab this new chapter in Batman history when this issue hits shelves on July 5th!

Chip Zdarsky and Jorge Jimenez's run on the Caped Crusader starts off with a bang in an issue full of massive twists, contemplative mystery, and absolutely stunning visuals.Review: BATMAN #125 - New Team, Old Fights