AQUAMAN #54, available in stores on Wednesday, November 20th, places all of the focus on one of the DC Universe’s most least-understood villains—David Hyde, a.k.a. Black Manta. Wagering war against Aquaman ever since accidentally killing his father, Hyde is now using an A.I. clone of his father to attack Amnesty Bay. Will Aquaman, Aqualad, and the rest of the team be able to stop this intimidating father and son duo?

Writer Kelly Sue DeConnick tells this story through the lens of Hyde’s past, walking the reader through various memories of his father. One shows the young Hyde throwing a coin into a water foundation, only to find his father fishing it out soon after and giving the child a hard lesson in “reality;” another features the two watching a football game with Hyde senior explaining why the purpose of any game was to crush your opponent completely.

These memories full of “fatherly advice” help the reader understand why the character chose such a villainous path. We see how Hyde’s father believed the world to be bereft of any true “goodness,” meaning the best way to face the hardships was by taking what you want—preferably by force. 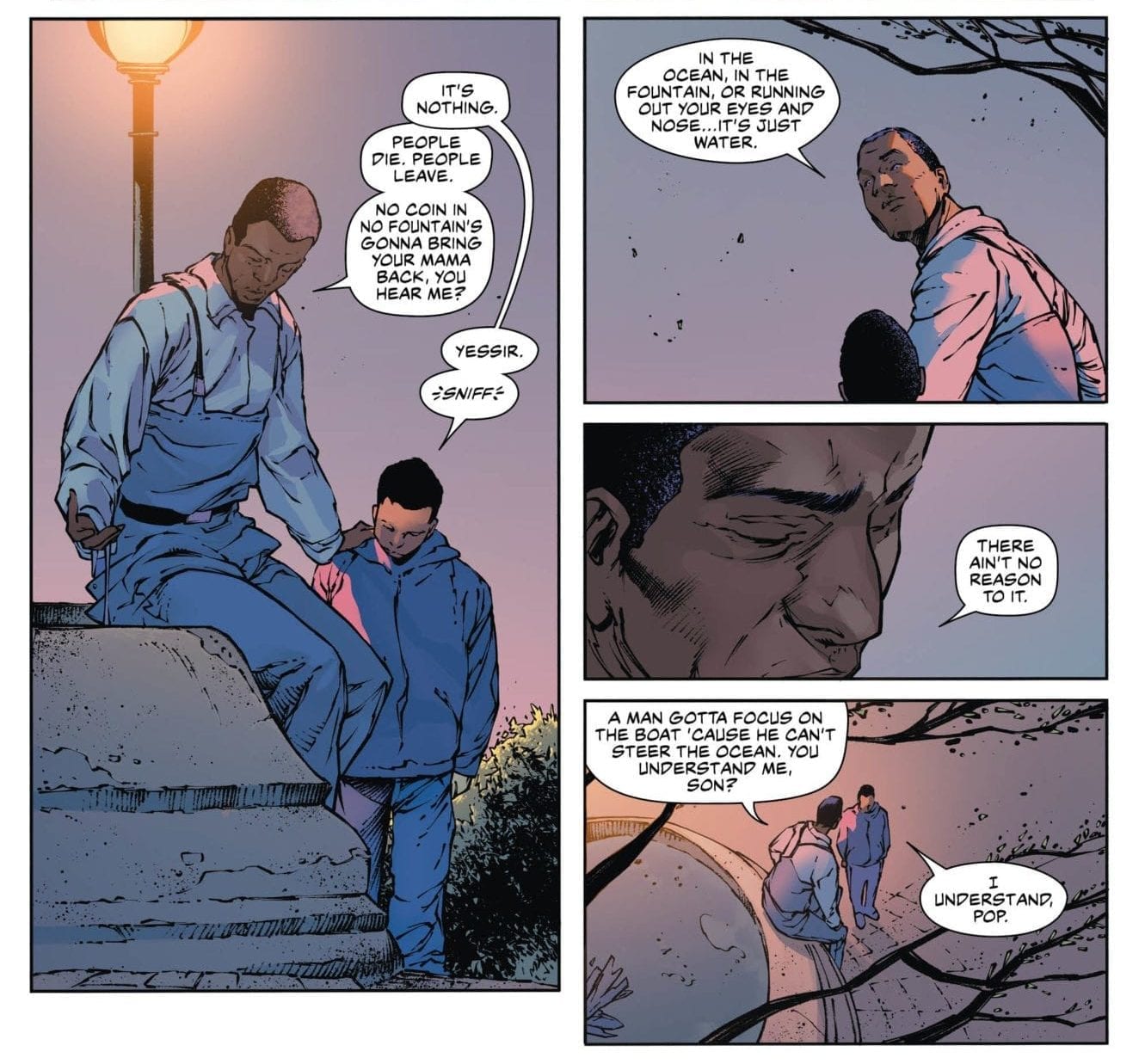 Readers are brought back and forth between these flashbacks and the fight Hyde and his A.I. “father” wage against Aquaman. One might think such a story structure would be too chaotic, but each transition occurs smoothly, propelling the narrative forward with further context regarding Hyde’s character. And it all culminates with Hyde overpowering Atlantean hero, leaving Aqualad and the rest of the team in charge of finding a way to stop the villain’s rampage. 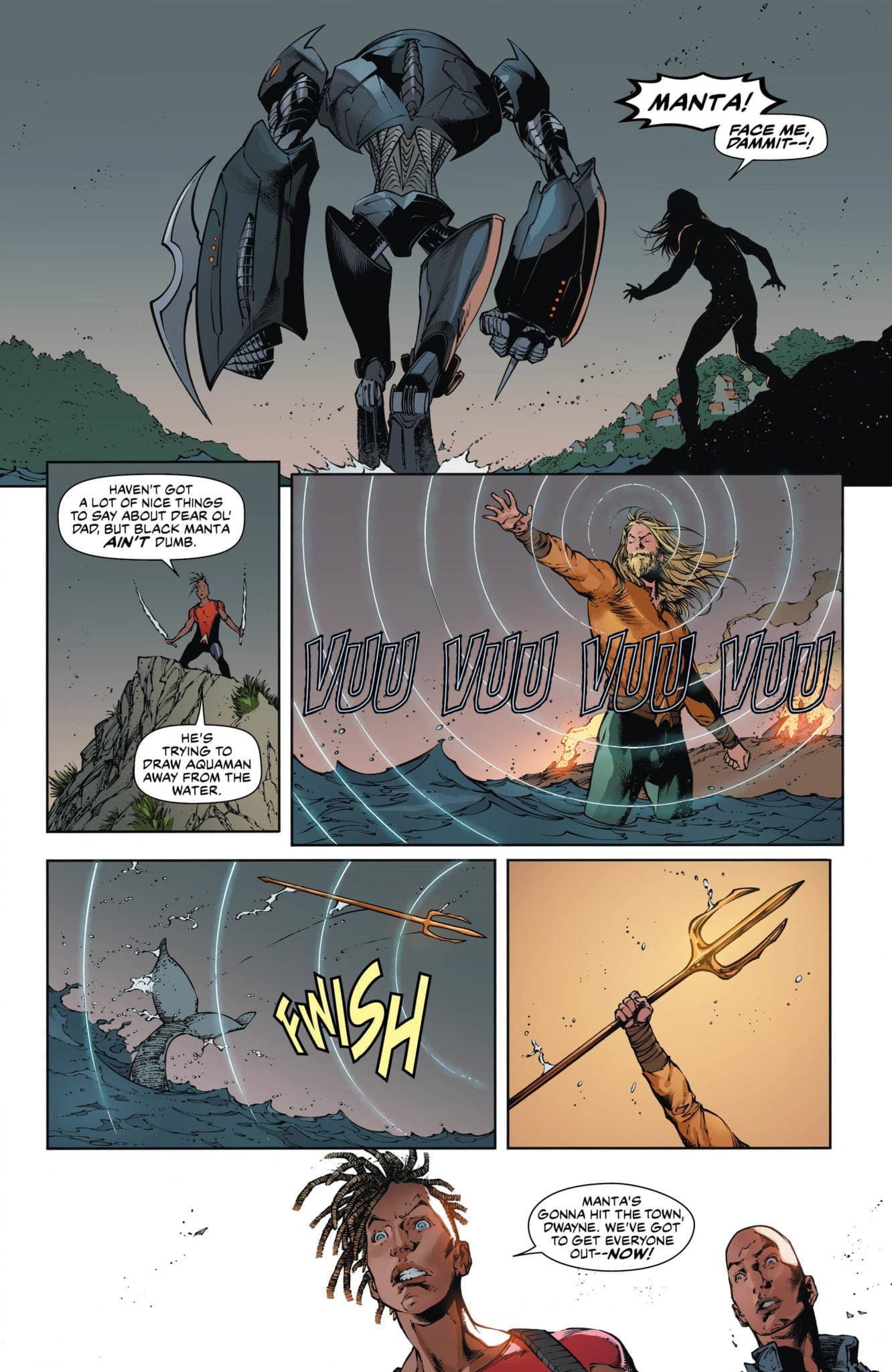 The artwork within this issue, if likened to a musical genre, would be considered “death metal”—fast-paced, intense, and slightly eery. Even the slower scenes of Hyde’s are short-lived, serving as the breath of air one takes after being tossed around by the ocean’s waves. The art team uses this tactic to draw the majority of readers’ attention to these scenes.

Robson Rocha and Jesús Merino’s penciling, along with Daniel Henriques and Vicente Cifuentes’ ink work, provides great differentiation between the destructive fighting in the present and the dreamlike sequences that represent Hyde’s memories of his father. This distinction is made more prevalent through Sunny Gho’s coloring, which employs cool, subdued shading in the memories’ backgrounds and harsh, warm colors to back up the chaos in the here and now.

This sense of contrast can be seen in Clayton Cowles’ lettering as well, showing mostly symmetrical word balloons in the past to represent the cold nature of his father and an assortment of differently shaped segments of dialogue in the present scenes. These harmonious art features help tell the story of Hyde’s father’s parenting—a robotic, calculating approach to parenting that ironically generates a rage-filled son.

Dan Panosian’s main cover artwork is unique in that it comes in two parts; the first side shows Aquaman fleeing from the mechanized Black Manta, leading to the conclusion of the seemingly short-lived battle on the second. In this panel we see Aquaman defeated, adding more doubt into readers’ minds as to whether the good side can come out on top.

Shane Davis, Michelle Delecki, and Morry Hollowell’s variant cover artwork follows the trend of previous iterations in this series, featuring Aquaman navigating the ocean depths surrounded by sharks. We’re once again reminded of the hero’s true mastery of this force of nature.

AQUAMAN #54 is the perfect story for DC Comics’ Year of the Villain event, giving readers a reason to sympathize with one of its most deadly criminals. We’re anxious to learn more about Hyde’s troubled psyche in the coming issues.

Do you think there’s any hope for Hyde’s redemption? Let us know what you think in the comments below!

Review: AQUAMAN #54—Fatherly Advice For Black MantaAQUAMAN #54, available in stores on Wednesday, November 20th, places all of the focus on one of the DC Universe's most least-understood villains—David Hyde, a.k.a. Black Manta. Wagering war against Aquaman ever since accidentally killing his father, Hyde is now using an A.I. clone...