Review: AGENTS OF ATLAS #1 Is A Fire Breathing Blast of Superhero Fun

AGENTS OF ATLAS #1 From Marvel Comics brings creators Greg Pak, Jeff Parker, Nico Leon, Carlo Pagulayan, Federico Blee, Jason Paz and Dono Sanchez-Almara together to introduce the 616’s latest team of young heroes from across the pacific and answer the question as to where the original Agents of Atlas are.

The AGENTS OF ATLAS debut in their own series as AMADEUS CHO, SILK, SHANG-CHI, WAVE, JIMMY WOO and all your favorites defend the cross-Asian portal city of Pan against the science-magic threat of one of Marvel’s classic villains! Classic science-magic superhero fun combined with young and old heroes from multiple lands clashing with one another, fighting monsters and maybe saving the world along the way! And who is ISAAC IKEDA, the Protector of Pan?

PLUS: Where are the original AGENTS OF ATLAS? Namora, M-11, Gorilla Man and Marvel Boy in an all-new top-secret mission! 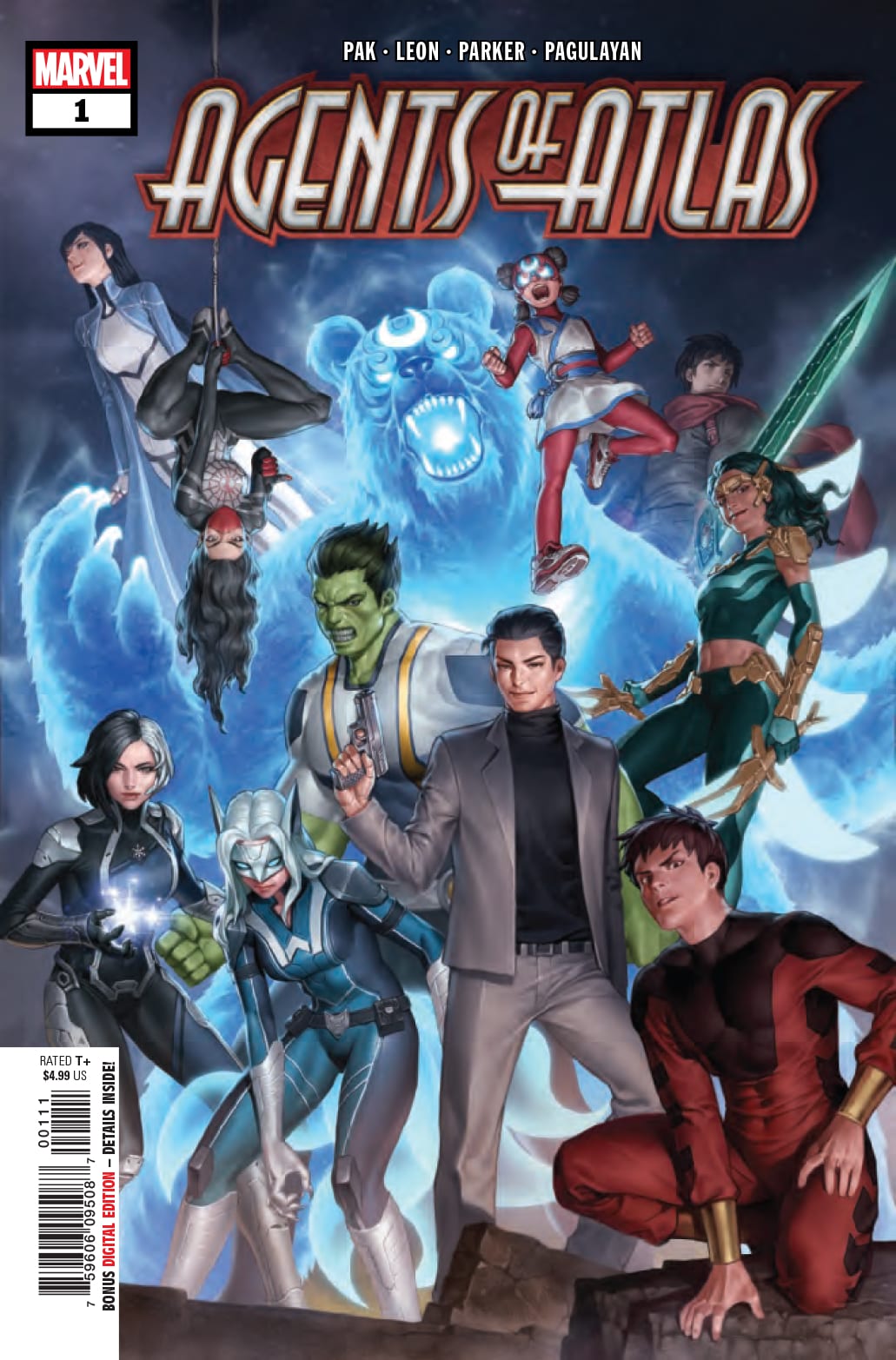 ‘Behind The Veil’
Written by: Jeff Parker
Art by: Carlo Pagulayan
Inks by: Jason Paz
Colors by: Dono Sanchez-Almara
Letters by: Joe Sabino

Split into two stories, Agents of Atlas is a fast and entertaining read. In the first segment (The Portal City of Pan) writer Greg Pak brings his talent for showcasing young characters to the forefront. From the very first page, the scribe is able to create true chemistry and dynamics between his cast of young characters. They are likable and relatable, especially as a team in the early stages of being a unit. Brawn and Silk are highlights as the defacto dual leaders of the group. There’s also some good banter and a nice sense of levity and humor that gives everything a fun and snappy feel. Pak is also developing a nice mystery here, introducing new character Issac Ikeda, the defender of Pan; plus Jimmy Woo and motherfucking dragons working behind the scenes. That’s right, dragons! War of The Realms brought fantasy to almost every corner of the MU, and it’s great to see a title embracing that and mixing it up with superhero action. The title is also tied to Sword Master, another new Marvel title from Pak that has a very similar feel and goals to Agents of Atlas. It all feels like a cool little corner of the MU that is new and refreshing. 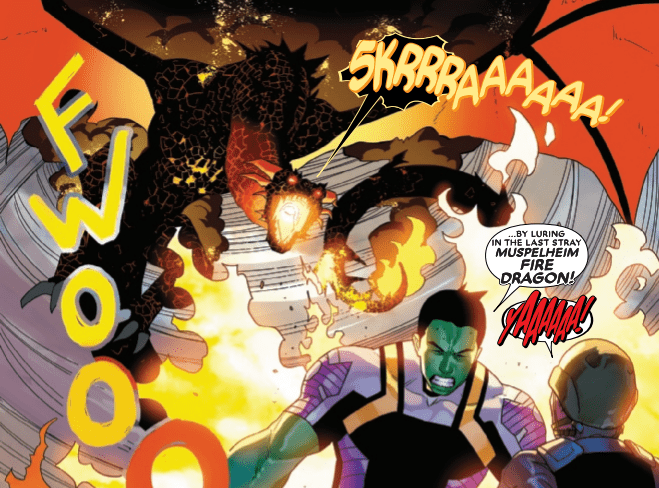 The second segment (Behind The Veil) finds Agents of Atlas veteran Jeff Parker tackling the current whereabouts of the original Agents of Atlas. Veil is a shorter read but Parker easily finds himself comfortable with these tried and true characters. It also shows readers how bizarre and unique the Agents are as a group. It’s great to see these characters on the page again.

In the ‘The Portal City of Pan’ Nico Leon and Federico Blee create a sleek and streamlined look that adds a lot of movement and energy to the narrative. The images pop and move, the delicate and think linework creating a light feeling that is propulsive and exciting. And man do they draw some awesome looking dragons together. 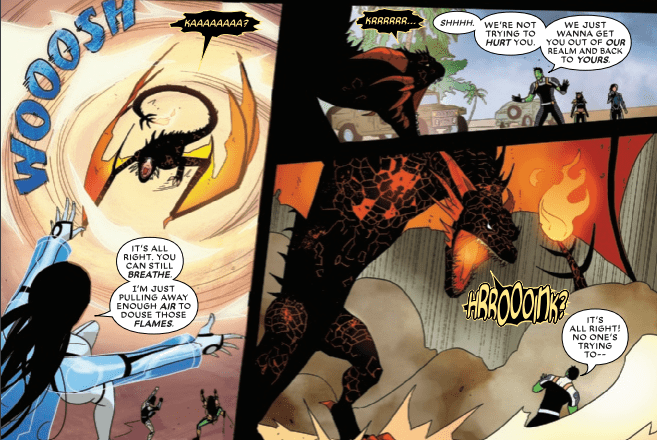 ‘Behind The Veil’, illustrated by Carlo Pagulayan, Jason Paz and Dono Sanchez-Almara has a very similar feel but also feels weightier. That makes sense as these are older characters and that added weight to the art and colors emphasis this is a team with history. 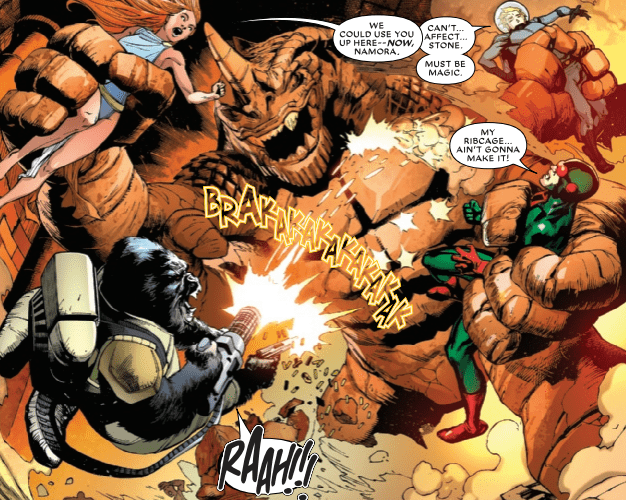 Marvel seems to be spinning a bunch of fun titles out of War of The Realms, and Agent’s of Atlas might easily be the best one yet. It’s a nice little corner of the MU being showcased here and if you are looking for something different and fun, give Agents of Atlas #1 a try.

Review: AGENTS OF ATLAS #1 Is A Fire Breathing Blast of Superhero FunMarvel seems to be spinning a bunch of fun titles out of War of The Realms, and Agent's of Atlas might easily be the best one yet. It's a nice little corner of the MU being showcased here and if you are looking for something different and fun, give 'Agents of Atlas' #1 a try.