TEENAGE MUTANT NINJA TURTLES: JENNIKA II #5, available in comic book stores on Wednesday, March 10th, offers readers the reunion they were waiting for. Lucia Rosetti, widow of the deceased mob boss Antoni Rosetti, has enlisted the help of Jennika to connect her with her non-mutant son. Originally, the ninja was only able to deliver messages, but there might be an opportunity for a family meeting in this issue. What could go wrong?

The issue opens with a tense discussion between Jennika and Raphael in the Turtle’s home base. The latter is opposed to former’s involvement with a mob connection, but she jumps into an argument immediately. 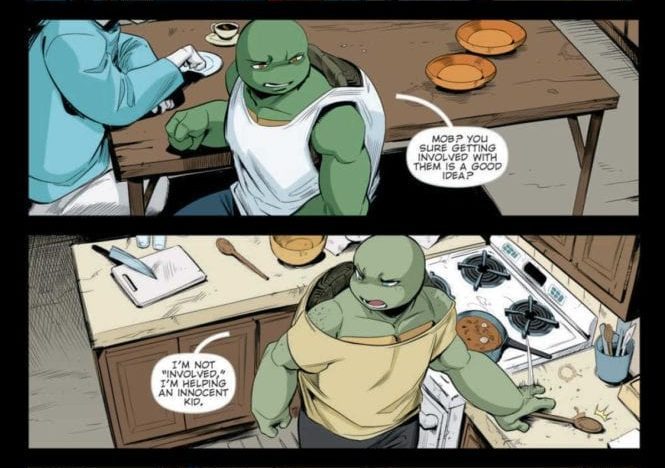 The reader knows Jennika chose to help Lucia due to her felt responsibility for her child’s well-being. We remember the recent reveal that the ninja herself murdered Antoni while working for the Shredder. She later opens up to Alopex in a heartfelt conversion, showing readers what a vulnerable friendship looks like. 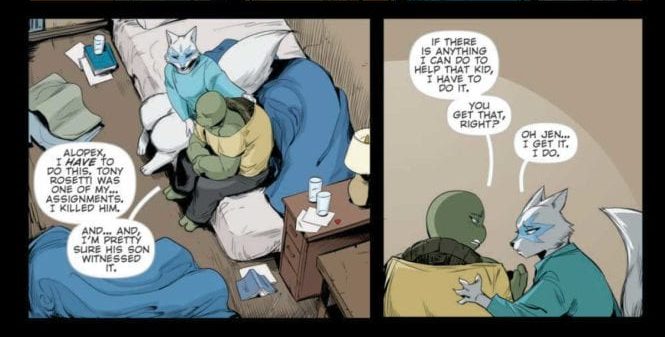 Jennika spends most of the issue tackling the challenges we saw in the previous story—delivering messages from Lucia to her son Junior. What changes in this issue, however, is an unexpected party waiting at the house. And, ironically, they might spur on the reunion between the mother and son.

However, readers will remember that Lucia revealed much of her nefarious last issue. Will Jennika uncover the truth before it’s too late? Writer Ronda Pattison does a brilliant job of guiding us through the narrative with just the right pacing, revealing some of the answers we were waiting for.

Jodi Nishijima’s penciling and ink work, alongside Pattison’s coloring, brought the characters within this issue to life. Jennika’s bright yellow headband stands out against the bland backgrounds throughout Mutant Town and the Rosetti’s home. This distinction helps readers sense that Jennika is facing off against the forces of both locales. We also like how Shawn Lee’s lettering used a similar color to Turtles’ dojo for the ninja’s internal dialogue boxes, giving us a sense of where her true heart resides.

TEENAGE MUTANT NINJA TURTLES: JENNIKA II #5 takes this story to the next level. The stakes are high for Jennika and the young Junior, so we’re anticipating a huge event next issue.

Do you think Jennika will discover Lucia’s true motivation? Let us know in the comments below!