This issue is split into two parts: the first places emphasis on Raphael and Alopex while the second gives readers a look at Leonardo’s endeavors.

Raphael and Alopex spend most of their evening exploring the streets of Mutant Town. Watching them express gratitude over the fact that no one judges them reminds us of the struggles marginalized groups of people face every day.

Unfortunately, their peaceful stroll is soon interrupted by a biker gang called Road Hogs who see them as a threat. What ensues is a thrilling clash between the groups, complete with fighting, racing, and unexpected events. 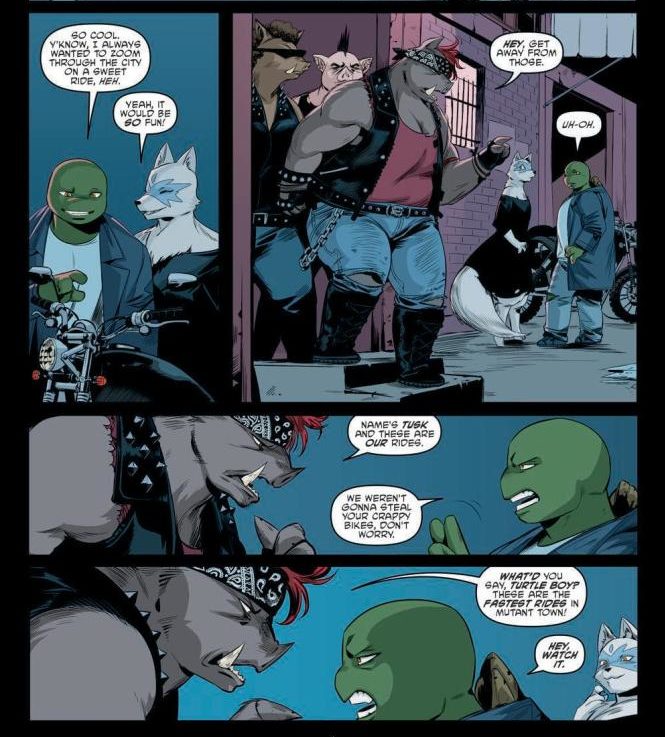 While the aforementioned duo are handling the Road Hogs, Leonardo races across rooftops to meet with another troublesome organization. A recent attack from an octopus mutant of the Mutanimals led the ninja to seek further intel regarding their plans. 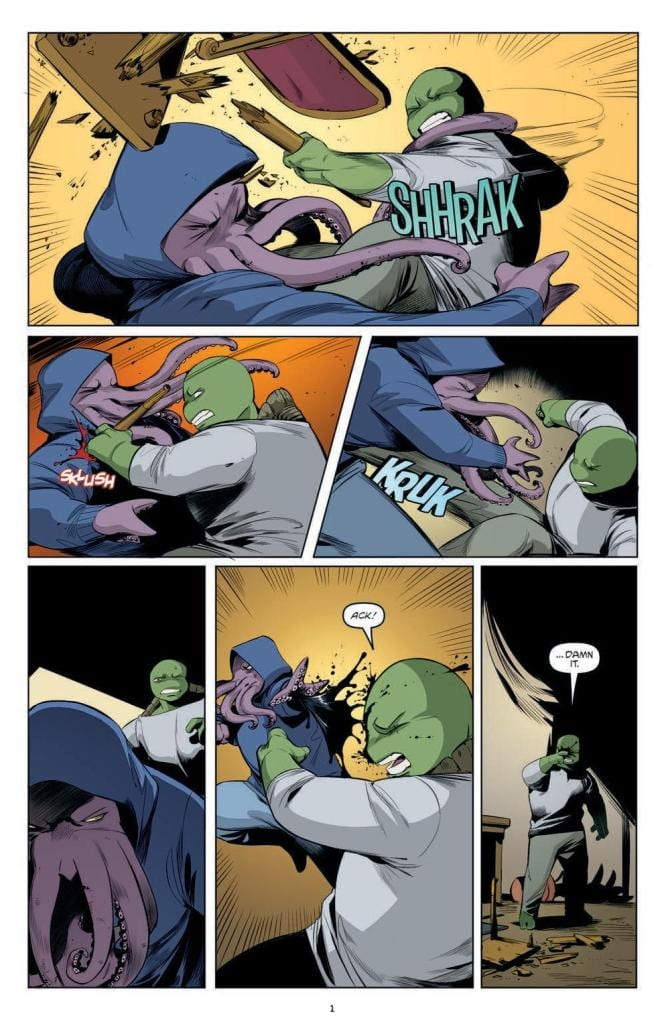 Leonardo soon infiltrates Old Hob’s Mutanimal hideout disguised as a “new recruit.” And everything seems to be going according to plan. But an issue soon arises that could cost both his and other lives if not taken care of.

Writer Sophie Campbell masterfully blends Raphael and Leonardo’s storylines together in seamless fashion. The transition from one plot point to the next is so smooth readers will be surprised to learn they essentially read two stories in one issue.

We also loved the characterization of both the Road Hogs and lackeys in Old Hob’s hideout. These antagonists are far from one-dimensional, offering readers a sobering look at how hard it is for groups to trust one another.

Jodi Nishijima’s penciling and ink work for the turtles’ action sequences are truly stunning. Their reptilians forms glide from panel to panel with the grace and flexibility of real world ballerinas. Ronda Pattison’s coloring complements these illustrations beautifully with earthen tones for each turtle, which stand out starkly against the urbanized landscapes of Mutant Town.

Although the Shawn Lee’s lettering is placed well throughout the scenes, it would have been helpful to see more variance in dialogue fonts. This would help differentiate each mutant character’s unique manner of speaking from one another.

What plans do you think the Mutanimals have for the turtles? Let us know in the comments below!