Pat Mills has admitted he had to hold off on introducing new concepts to Nemesis the Warlock early on. In the preface to the first volume of The Complete Nemesis the Warlock, he recalls fearing that “Nemesis would implode under the weight of trying to combine crazy inventions with the conventional hero approach the readers were demanding.” So he and artist Kevin O’Neill decided to revisit and flesh out some of the strip’s earlier ideas instead. In other words, Nemesis, as we know it, was a product of restraint. But in the same way, you might try to restrain an angry bull because Nemesis is a creation of dark joy, the kind of comic where it’s easy to imagine the authors cackling over each page. Of course, the hero is an alien who wants to kill humanity. Just look at one of O’Neill’s hellish renderings of the petty world of man. Who else could it be?

Though Nemesis himself was less of a presence in the early strips, the series started more as a showcase for bizarre forms of transport. Mills and O’Neill’s editor had called their proposal for a tube transport in Ro-Busters “too complicated,” so the first few Nemesis strips went under the name Comic Rock, giving the two a place to develop outlandish throwaway worlds for their weirdest concepts. Except, the world of the first strip returned in the second. It may have been so a strange system of tube-shaped roadways could be one-upped by people traveling along electrical wires. But then the second strip ended on a cliffhanger. By the fourth, they had a full-blown series on their hands.

The bedrock the new series built itself on wasn’t Nemesis, but Torquemada. The villain had been introduced in the first strip as captain of the Tube Police, a religious blowhard who protected his “sacred traffic laws.” It wasn’t long until he was established as humanity’s supreme ruler. And as Torquemada took power, the strip reshaped itself to fit him. Where the first few strips had been pure sci-fi, the first under the new title “Nemesis the Warlock” opens on a medieval-style illuminated manuscript. Torquemada had not-so-subtly been named after a key figure of the Spanish inquisition Tomás de Torquemada, after all.

So along with medieval stylings, the strip gave Torquemada an inquisition of his own. The extermination of all alien life. Nemesis had never been shown before this point, only heard as a mysterious voice emanating from a stylish spaceship. Then why not make him an alien? And so the engine that would sustain the strip for its entire run was set in motion. 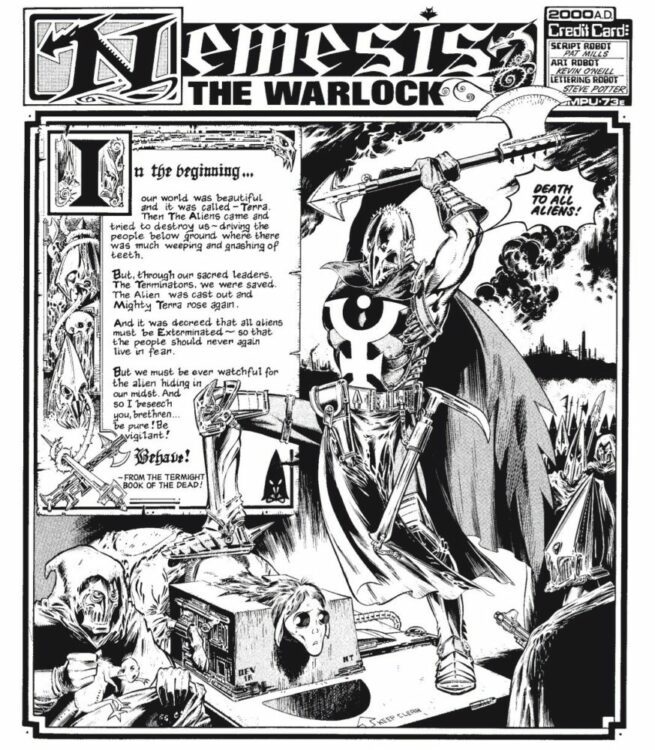 But Nemesis is not just any alien. He has the head of a cubist horse, long horns, and cloven feet, marking him as demonic. It’s an incredibly striking design in a series of almost nothing but striking designs. O’Neill keeps up a mad pace in introducing strange aliens and terminators in increasingly baroque armor. But for all its harsh edges and steel, there’s something organic about O’Neill’s art. Though organic often calls to mind soft tissue and vegetation. This is a world of insects and fungi. It’s no coincidence Earth goes under the name “Termite.” Humans scurry about immense, towering structures, armor resembling chitinous exoskeletons, eyes bulging from behind every visor. Even the walls of the grand Temple of Terminus look more chewed than sculpted. Again, Torquemada is the touchstone for how the style of the strip develops. He’s introduced as a figure wearing a futuristic helmet shaped like a caproate. But the helmet becomes increasingly elaborate after his death and transformation into a ghost. Eventually, he stops wearing clothes, resembling a withered corpse with a gothic cathedral for a head. Then the helmet loses its sheen, and it becomes unclear where the helmet ends, and he begins. By the time two giant robots fight across a battlefield, even steel has gained a sick, fleshy texture. 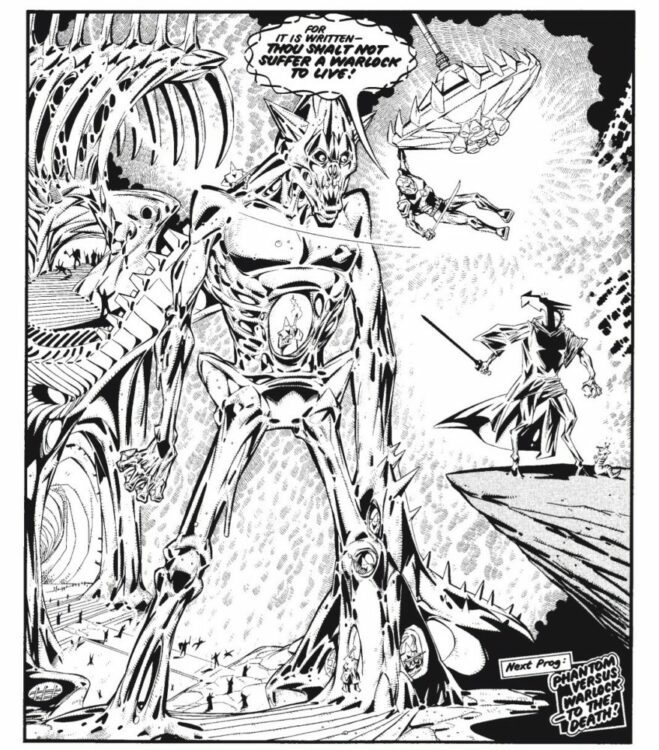 And yet Nemesis is funny. Very funny. Nemesis may be a world of rot, but it’s one that sprouted from the corpse of MAD magazine. Mills has openly talked about Torquemada being inspired by the teachers he had to deal with in his Catholic upbringing. That sense of wry spite comes through in Torquemada’s pettiness and hypocrisy. Because Torquemada is both a specter of ultimate bigotry and of paltry classroom authoritarians. Nemesis’ answer to Torquemada, then, is gleeful misbehavior. He may not laugh or smile, but his blows against Torquemada often take the form of impish tricks. He’ll dance along the tops of spears, fool a commander into taking a grotesque alien form or put the ashes of Torquemada’s mother in his nosebag. He exists to make fools of the blustering, self-serious terminators and monks. Because while the strip may draw from real pain and anger, it also knows that sometimes it’s best to just laugh at it.

Pat Mills referred to the early Nemesis strips as “comic jamming.” An improvisational style where he and O’Neill would try to come up with the wildest ideas they could think of. Other people might refer to this style of creation as spitballing. But Nemesis never stopped being a comics spitball, even when some of the improvisations were dropped. Because the strip at its purist is a wad of pulp and froth, sailing towards the head of the class.