For a generation not raised on Rocky Horror Picture Show, Napoleon Dynamite might be the absolute definition of a cult film. So when IDW announced that Napoleon, Pedro and the gang were headed to a comic book series, expectations were understandably high. Still, with a top notch creative team in writers Carlos Guzman-Verdugo and Alejandro Verdugo, artist Jorge Monlongo, and letterer Christa Miesner, fans have reason to hope that their favorite weirdo high school comedy can make the transition well. Now that the book is out, should fans invest in the first issue? 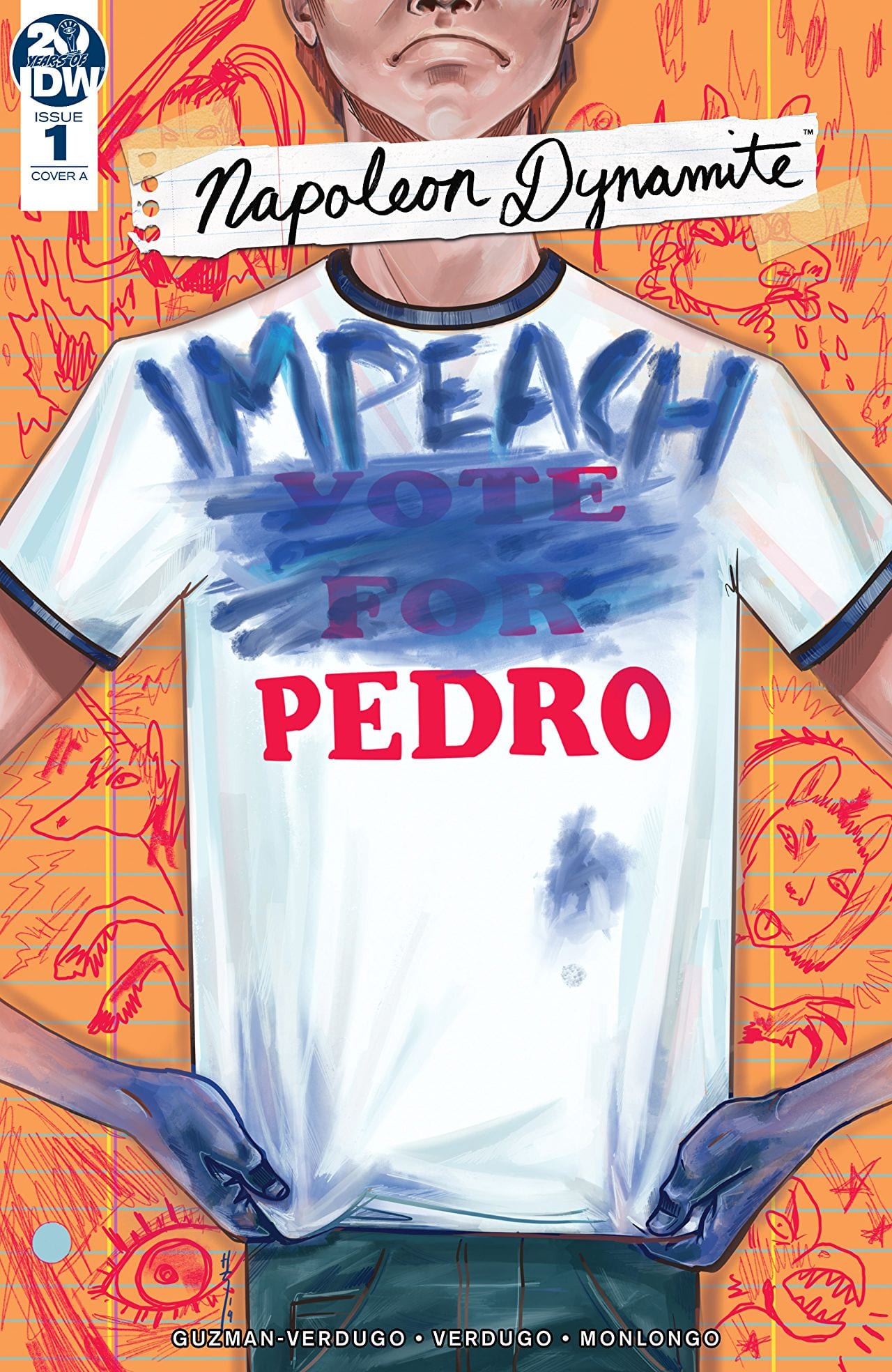 Your Mom Goes to College

Issue one of Napoleon Dynamite picks up pretty much exactly where the film left off. The election has been successful, Pedro’s administration is in power, and Pedro, Napoleon, and Deb are still hopelessly unpopular. Now, however, it’s senior year for the teens, and everyone’s nervously looking toward the future. We get a glimpse of Napoleon’s plans in a conversation he has with a guidance counselor, in which he tells of his plans to be a cryptozoologist. The guidance counselor, and really everyone in Napoleon’s life, isn’t thrilled about his choices.

But that’s not all Napoleon has to worry about. A new girl named Joana Gato has transferred to the school, and for some strange reason, has her heart set on bringing down Pedro’s presidency. Can Napoleon & Co. fend her off while deciding on colleges, dealing with bullies, and, just maybe, finding some romance?

Oh yeah, and has the mayor been murdered? 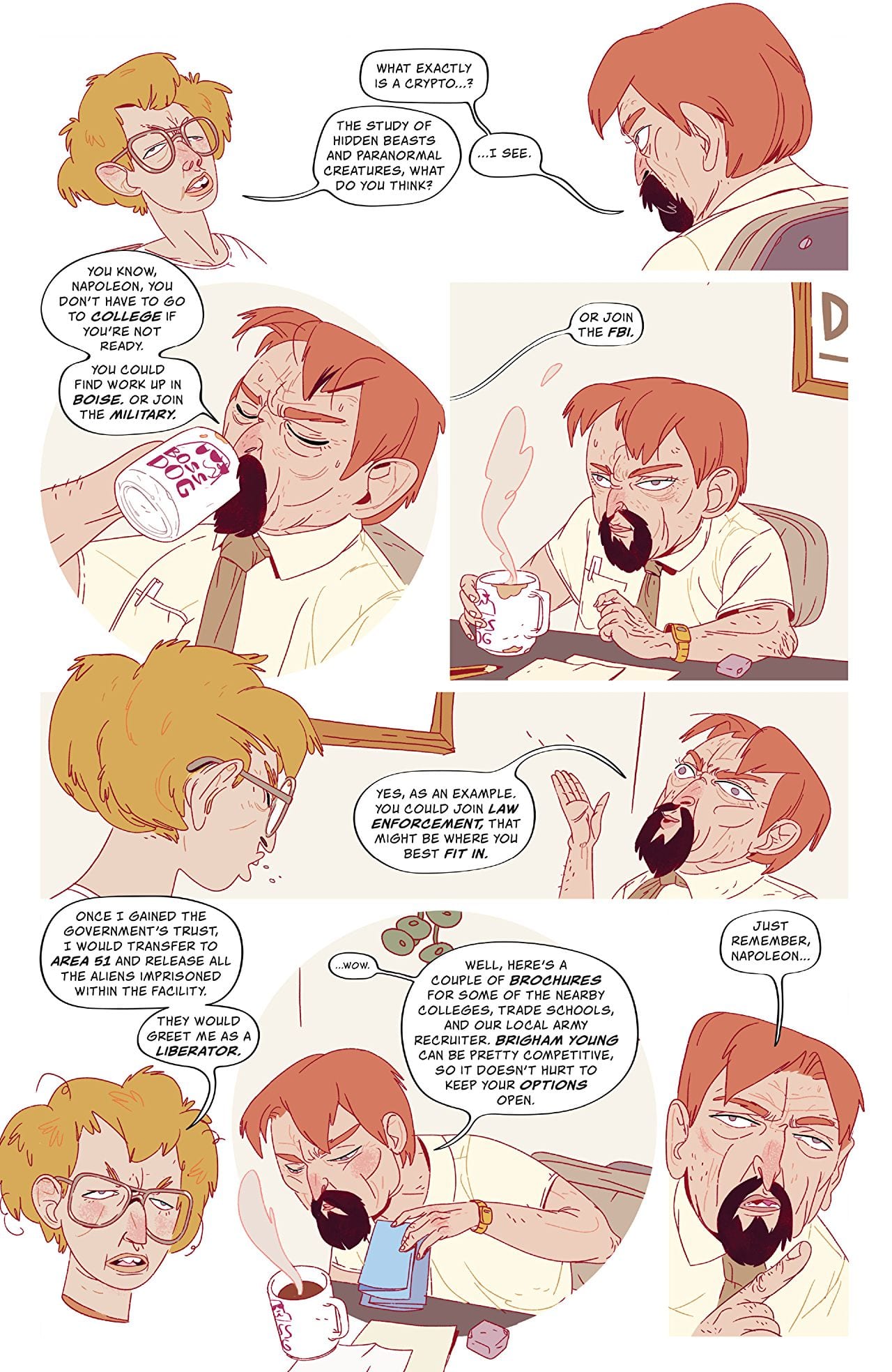 Carlos Guzman-Verdugo and Alejandro Verdugo bring all the offbeat, repeatable humor of the movie to this comic book version of Napoleon Dynamite. Fans will be pleased to know that the world of Napoleon is very much intact. The small-town, ambling antics of Napoleon’s school and family life matter a lot to the story, with returning characters Grandma, Rico, and even Tina coloring Napoleon’s mundane but somehow ridiculous life. Plus, the addition of the murdered mayor story gives this comic just enough zing to make it its own story, building onto the film’s world instead of just rehashing it.

The only critique you might give the writing (and overall, the comic) is the overuse of first person narration from Napoleon himself. Part of the hilarity of Napoleon Dynamite in the movie is that he’s just so weird, almost alien. He’s relatable, sure, but the humor comes out of his actions and statements being so strange and unpredictable. Getting a window into that thought process sounds fun, but it ends up spoiling his weirdness, like explaining the punchline of a joke before you tell it. All that said, Guzman-Verdugo and Verdugo nail a perfect Napoleon impression on the page. The over-serious lingo they write will have you hearing John Heder’s voice as much as you see his iconic look. 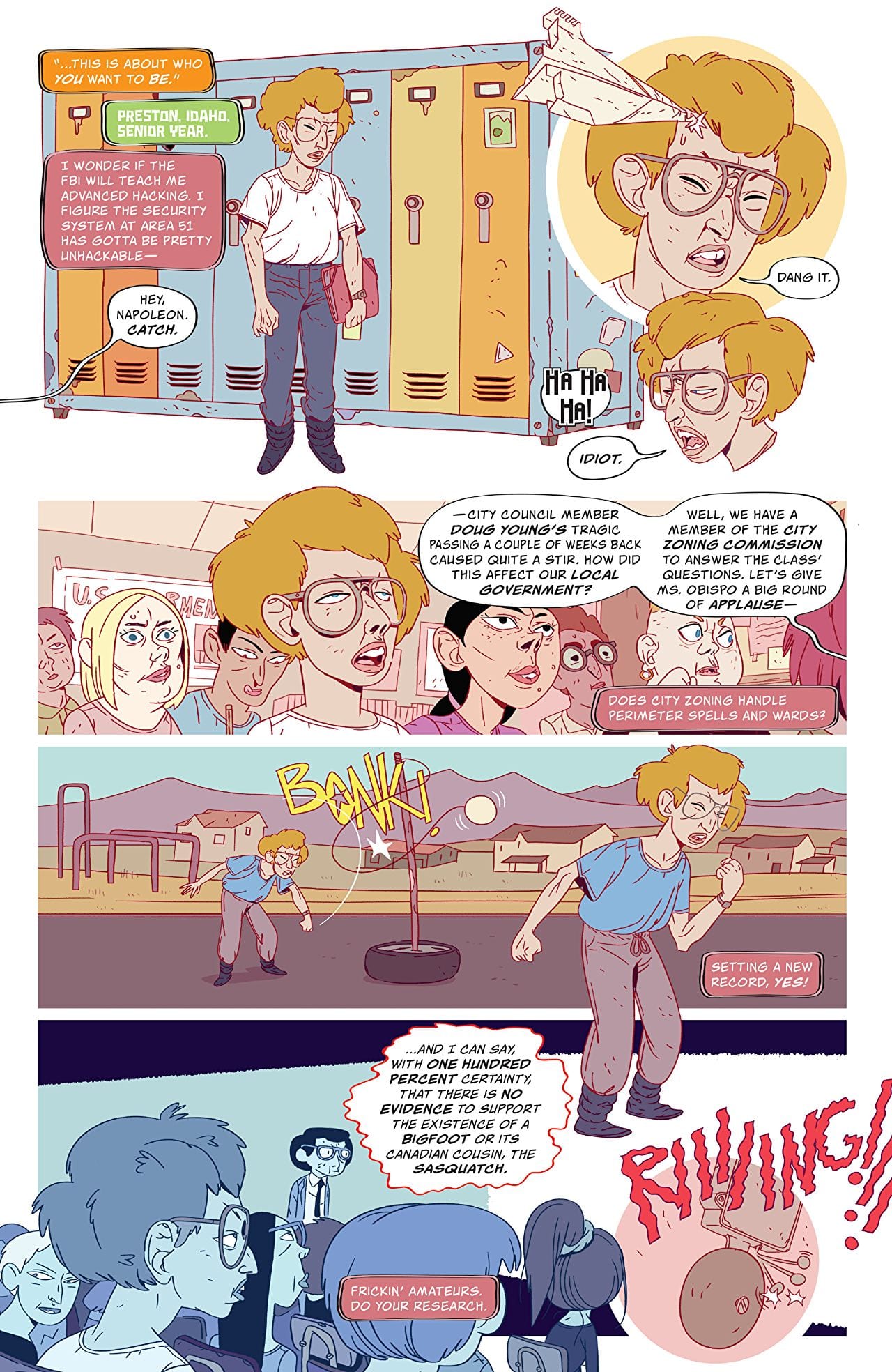 The Shading on the Upper Lip

Speaking of the look, this comic’s artwork from Jorge Monlongo accomplishes something pretty incredible. Without creating photorealistic drawings of the movie’s actors, the art manages to present the characters perfectly. Napoleon’s misplaced arrogance, Pedro’s lack of enthusiasm, Deb’s awkwardness are all right there, distilled into cartoonish caricatures that work so well in a comic book. Actually, if IDW never published this comic, or even if the movie had never been made, Napoleon and Co. would have been IDEAL for a newspaper funnies strip, so perfectly do their designs match their personalities. If Monlongo’s designs get the acclaim they deserve, they’ll certainly be on more more quirky, character-driven humor books.

Of course, these designs wouldn’t work half as well if the tone of the comic didn’t click with the film like it does, and a lot of that comes from Monlongo’s colors. Their muted pastels and fluorescent lighting give the comic the same indie feel that the movie had, even though the designs are anything but realistic. Monlongo’s colors don’t just link the movie to the comic; they prove that it can work as one.

I’d Vote For You!

If you haven’t gathered by now, fans of the Napoleon Dynamite movie should absolutely pick up its comic book cousin. All the awkward teen angst, bone dry humor, and Midwestern monotony are there, complemented and improved by a unique visual style. But what if you’re not a fan of the movie? Should you buy Napoleon Dynamite #1 if you don’t like, or haven’t seen, the cult classic? We’d still say yes, and that’s because for everything this book is, it’s most importantly different. In a market that is easily saturated with similarly-drawn superheroes, variety is absolutely vital. You’ll get that with Napoleon Dynamite, we assure you.

For more reviews like this one, follow us on Twitter. And for all your comic book discussion, news, and reviews, stay tuned to Monkeys Fighting Robots.

Grant DeArmitt
Grant DeArmitt is a New York City-based entertainment journalist. He writes about horror, comics, and any cult classics. Once, at a bookstore, Ron Perlman told him his hair was "lovely." Twitter: @GrantDeArmitt // Email: [email protected]