“BLAM. You’re dead. Maybe that’s how I’ll do it. Just get you in my sights and blow your brains out. Nah. That’d be too quick.”

Those are the first sentences of Daredevil issue number 181: The Last Hand. They’re said by the mass murdering psychopath, Bullseye, as he sits in his jail cell seething at Daredevil over their latest conflict. Daredevil saved Bullseye’s life in their last encounter, which in Bullseye’s warped sense of honor, was the greatest humiliation. So, now Bullseye has vowed to kill Daredevil and become the world’s deadliest assassin again. He doesn’t care who’s going to get hurt or who’s going to suffer, he’s going to get what he wants.

Daredevil 181 is often called the epitome of a Daredevil story. It’s often discussed as an influence for a lot of creators in the industry, particularly for Daredevil stories. Brian Michael Bendis used it as influence for his fantastic run on Daredevil back in the early 2000s. And it really makes perfect sense, this comic was ground breaking for its time and really showed that Marvel was pushing the boundaries of comic book literature in the early 80s.

Believe it or not kids, there was a time when Marvel was not known as the fun company telling cool superhero stories that the whole family could enjoy. They were actually the exact opposite of that, and often branded themselves as the “edgy” comic book company. Through X-Men, Spider-Man, and Daredevil Marvel was telling dark, complex stories that were known for having a certain sense of bitterness behind them and were provocative for the time. Daredevil 181 was ground breaking for a plethora of reasons. 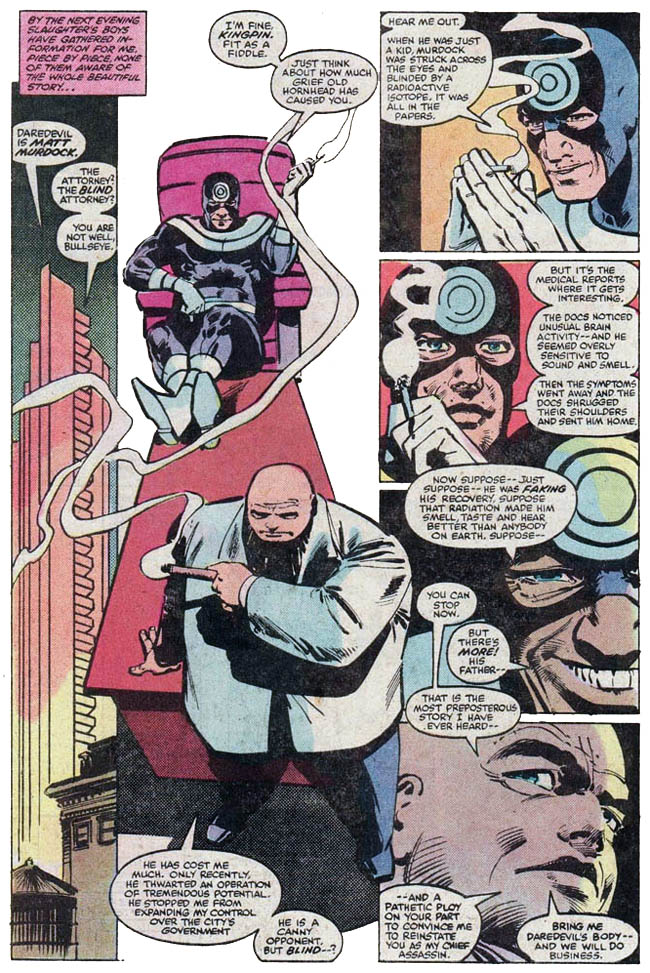 From an artistic perspective, Frank Miller’s pencils and Klaus Janson’s colors (the same team on The Dark Knight Returns) brilliantly capture a troubled, grim New York through heavy shadows, and negative space. The facial expressions are unique and specific for each character, and there’s a lot of movement in each panel. It gives the action scenes a lot of weight and tension as the two artists show every blow and strike and their ramifications. The art also keeps the story focused. As each panel has a specific purpose in keeping the story flowing, or showing us how Bullseye interprets something.

The story is where the book really shines. Rather than just rehash another “by the books” of Daredevil fighting Bullseye, this one is told entirely from the point of view of Bullseye. And it’s how we as an audience can understand his hatred, see how brilliant of a foe he is, and even kind of like him through his pretty funny internal narration. Most superhero stories had sympathetic villains then, and there were even a few villain focused books, but this one gave us a front row seat to the mindset of a terrifying villain, and made him the protagonist of the comic. And as he hunts down Daredevil we feel scared that he may actually do it.

The biggest conflict of this story, and it’s most famous confrontation was between Bullseye and Elektra, Daredevil’s ex-girlfriend, and top assassin for the Kingpin. The two have a disturbing fight through out the streets of New York each showing their respective abilities and fighting styles; the fight is also done with barely any dialogue, which makes it all the more haunting. And ultimately Bullseye wins by stabbing Elektra through the heart with one of her own weapons. And the only reason he does this is because Bullseye was pissed at her for taking his old job.

This was also a time when superhero deaths were more permanent, so when Elektra died, she died…. Well that is until Marvel pressured Miller in to bringing her back in one of the most bizarre stories ever, but back then a comic book character dying was more of a long-term concept. But, yea, at the time she was dead, and audiences had no idea that she was coming back.

And with Elektra’s death, Daredevil finally confronts Bullseye, but he’s much more primal, violent and uncompromising in their battle. It’s another grim fight with little dialogue that lets the art of the comic set the mood. Miller succeeds with flying colors in the show don’t tell rule here. But, even after Daredevil puts Bullseye in intensive care again, Bullseye still gets the last laugh as he hurt Matt Murdock. Worse than anyone, Bullseye, hurt Murdock.

This book is perfect. It has amazing action scenes, a disturbed protagonist that keeps you glued to the book, Frank Miller’s best art ever, and a focused narrative that never gets bogged down or distracted. This is the Daredevil comic, and one of the best comics ever created. If you’ve never read it, get your hands on it as soon as you can. It’s definitely worth the time and money.