Marvel Preview: Witness The Swordbearers In X OF SWORDS: STASIS #1

The ancient Swordbearers prepare for battle in this exclusive Marvel Comics video preview for X OF SWORDS: STASIS #1, available on October 28th. Written by Jonathan Hickman, the Swordbearers of Arakko are called forth in the tournament against Earth’s mutants, with the Earth itself as the prize.

Says artist Pepe Larraz about the design of the Swordbearers: “The swordbearers had to look as dangerous as possible. They had to tell a story of fighting for survival over a millennia; a story of ancient times, deadly violence and a brutal kind of beauty,…”

You can check out the issue’s cover, the video preview, and read the full Marvel press release below.

Is X OF SWORDS your must-have event this year? Let us know what you think in the Comments section, and please share this post on social media using the links below.

THE X-MEN CONFRONT THE SWORDBEARERS OF ARAKKO IN THE NEW X OF SWORDS: STASIS TRAILER!

New York, NY— October 1, 2020 — X OF SWORDS, the epic X-Men crossover that represents the next chapter in Jonathan Hickman’s bold new vision for mutantkind, is now underway! In the action-packed beginning of the biggest X-Men story since HOUSE OF X, fans everywhere finally learned about the deadly conflict that lies at the center of this mutant milestone.

The new mutant nation of Krakoa is under threat of invasion by the inhabitants of the lost land known as Arakko, and Saturnyne, the Omniversal Majestrix, has devised a delightful way to settle this ancient dispute— a thrilling tournament!

Ten champions from each nation will gather mythical swords to wield in duels that will determine the very future of mutankind. Ten X-Men will rise up to defend their home. But who are the mysterious new characters that will be called to battle on behalf of Arakko? Meet the swordbearers of Arakko, a host of exciting new characters that will go on to play major roles in the X-Men saga moving forward. Get your first glimpse at Solem, Pogg Ur-Pogg, Isca the Unbeaten, and more in the exciting

“The swordbearers had to look as dangerous as possible. They had to tell a story of fighting for survival over a millennia; a story of ancient times, deadly violence and a brutal kind of beauty,” superstar artist Pepe Larraz said about his designs for the X-Men’s deadly new enemies. “In designing them, I mixed elements inspired by Egyptian culture, Laamb (Senegalese fighting), Donga (Ethiopian spear fighting), Nuba body-paint, postmodern minimal fashion, Thierry Le Goues’ photography, Maori weaponry, and biomimicry, among other things. Well, and a giant crocodile with four arms…”

Prepare yourself for more unbelievable revelations about these new characters when X OF SWORDS: STASIS #1 arrives on October 28th! 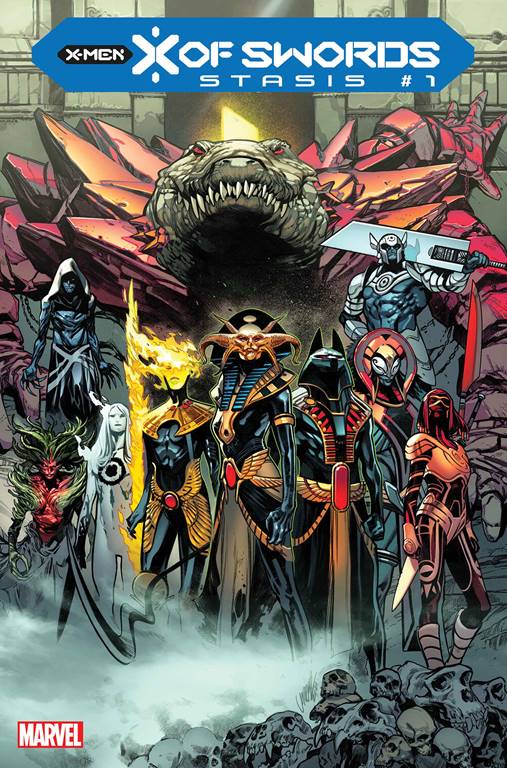 Art and Cover by PEPE LARRAZ