Marvel Preview: Shang-Chi Takes On All Comers On The Cover Of SHANG-CHI #1

With production resuming shortly on the Shang-Chi film, Marvel Comics is anxious to build anticipation for the titular character. Now, Marvel released an early look at the cover for SHANG-CHI #1 by artist Arthur Adams to get fans hyped for the in-production film.

You can check out the new cover and read all about the series in the official Marvel press release below.

Are you a fan of Shang-Chi? Does this cover, showcasing a new uniform, get you excited for the character’s return in a new series? Let us know what you think in the Comments section, and please share this post on social media using the links below.

THE MASTER OF MARTIAL ARTS BATTLES AN ARMY IN ARTHUR ADAMS’ SHANG-CHI #1 COVER!

New York, NY— July 27, 2020 — Shang-Chi returns this September in a brand new series written by Eisner Award-winning writer Gene Luen Yang (American Born Chinese) with incredible art by Dike Ruan (Spider-Verse, Black Cat) and Philip Tan (Uncanny X-Men). This all-star creative team will take Marvel’s greatest fighter on an epic tale of family, betrayal and justice as they launch an exciting new chapter in the legend of Shang-Chi. To commemorate Shang-Chi’s latest adventure, industry legend Arthur Adams has turned out a stunning cover depicting the longtime Avenger bravely facing off against a horde of warriors single-handedly! Outfitted in his new costume designed by superstar artist Jim Cheung, this action-packed cover is just a taste of the fight scenes you can expect as Shang-Chi embarks on a quest to discover long-hidden truths about himself, his family, and the secret society he thought he could leave behind… Check out Arthur Adams’ cover below and don’t miss SHANG-CHI #1 when it hit stands this September! For more information, visit marvel.com. 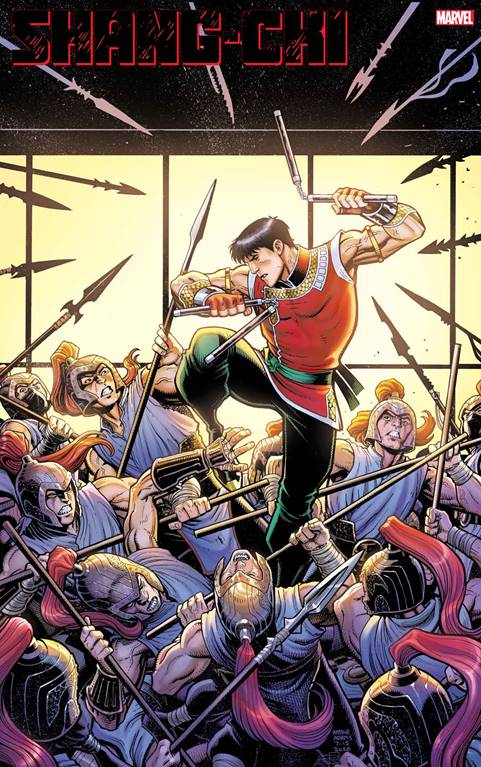