Just in time for Halloween, Marvel Comics has announced the Green Goblin will be appearing during the Sin-Eater event in AMAZING SPIDER-MAN #850, available to retailers on September 30th. To celebrate the milestone, the issue will also contain three backup stories from Kurt Busiek, Chris Bachalo, Tradd Moore, Saladin Ahmed, and Aaron Kuder.

Says Marvel about the Green Goblin’s appearance: “One never knows what to expect when this maniacal mastermind shows up in Peter Parker’s life and their latest showdown…” You can check out the cover art, a promo video, and read the full Marvel press release below.

Do you think the Green Goblin is the greatest Spider-Man villain? Let us know what you think in the Comments section, and please share this post on social media using the links below.

THE GREEN GOBLIN WREAKS HAVOC IN THE AMAZING SPIDER-MAN #850 TRAILER!

New York, NY— September 2, 2020 — Spider-Man reaches another milestone this month with AMAZING SPIDER-MAN #850, the latest issue in writer Nick Spencer’s captivating run on the title. Joined by an all-star lineup of artists—Ryan Ottley, Humberto Ramos, and Mark Bagley—this monumental issue will feature the return of Spider-Man’s greatest villain, the Green Goblin! One never knows what to expect when this maniacal mastermind shows up in Peter Parker’s life and their latest showdown, amidst the Sin-Eater’s reign of terror, will be one for the ages!

Now, see what the Green Goblin has in store for Spidey in this action-packed AMAZING SPIDER-MAN #850 trailer – featuring never-before-seen artwork of the fateful confrontation!

“In the spirit of AMAZING SPIDER-MAN milestone issues past, we are giving you an issue you will not forget,” promises Editor Nick Lowe. “AMAZING SPIDER-MAN #50 gave you ‘Spider-Man No More’, #300 gave you Venom, #700 gave you Superior Spider-Man and #800 gave you the Red Goblin. Nick Spencer and our legendary AMAZING SPIDER-MAN artists Ryan Ottley, Humberto Ramos & Mark Bagley bring back the Green Goblin for a brutal story that tops them all! And as if THAT giant-sized story wasn’t enough, we have a trio of stories by Spidey legends of past, present and future to drive home that Spider-Man is the greatest character in all of fiction!” 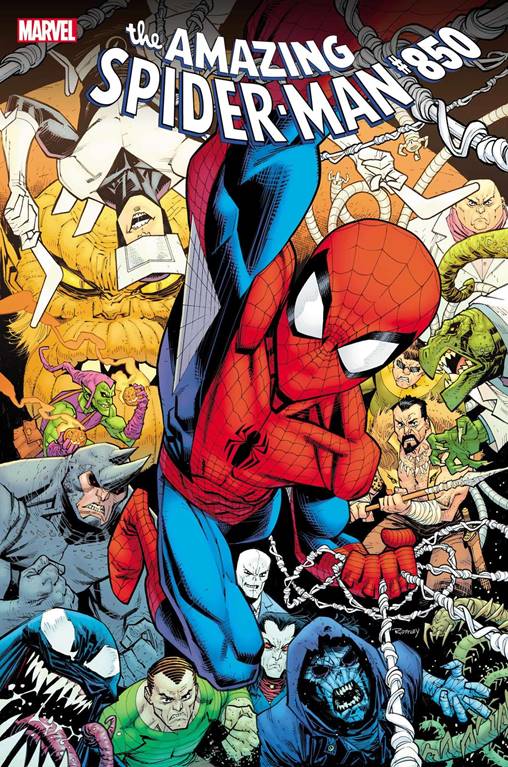