Not much is clear about the current state of the MCU’s Black Widow film, but Marvel Comics is moving full steam ahead with its release of a new series that presumably would have dovetailed with the films original release date. Today, Marvel has released a preview of the first issue’s cover and a trailer for the comic that has a decidedly Archer-esque style to the art.

Written Kelly Thompson with art by Elena Casagrande, the story from the official Marvel press release is light on details. However, the trailer seems to indicate our crimson-haired super spy is pulled out of retirement when her enemies refuse to let her leave the old life behind.

You can check out the cover, watch the trailer and read the official Marvel press release below.

Which are you more excited for: the new Black Widow comic or the pending film? Let us know what you think in the Comments section, and please share this post on social media using the links below.

NATASHA ROMANOFF IS THE BLACK WIDOW NO MORE IN NEW COMIC SERIES!

Take a peek at Kelly Thompson and Elena Casagrande’s Black Widow #1 in a thrilling new trailer!

New York, NY— August 7, 2020 — What happens when Black Widow’s deadliest enemies discover a way to take her out? Find out this September when Eisner-nominated writer Kelly Thompson (Captain Marvel) and rising star artist Elena Casagrande (Catwoman) take the Marvel Universe’s greatest spy on a heartbreaking thrill ride into uncharted territory. Natasha Romanoff’s world is upended when the superspy Avenger finds herself trapped in a mystery that even she can’t solve. Your first clues about the mission that could mark the end of Black Widow await in this top-secret trailer!

“It’s a bold new vision for Black Widow and one I am really hoping people can get excited about,” Thompson told Marvel.com earlier this year. “Our first arc has some of the stuff you would expect in a Black Widow book, but I think twisted in a new way that’s interesting – and where she ends up at the end of this highly personal and life changing story is ALSO interesting!”

Discover all the secrets of Natasha Romanoff’s latest adventure when BLACK WIDOW #1, written by Kelly Thompson with art by Elena Casagrande and colors by Jordie Bellaire, goes on sale this September. Pre-order your copy today online or at your local comic shop! For more information, visit marvel.com. 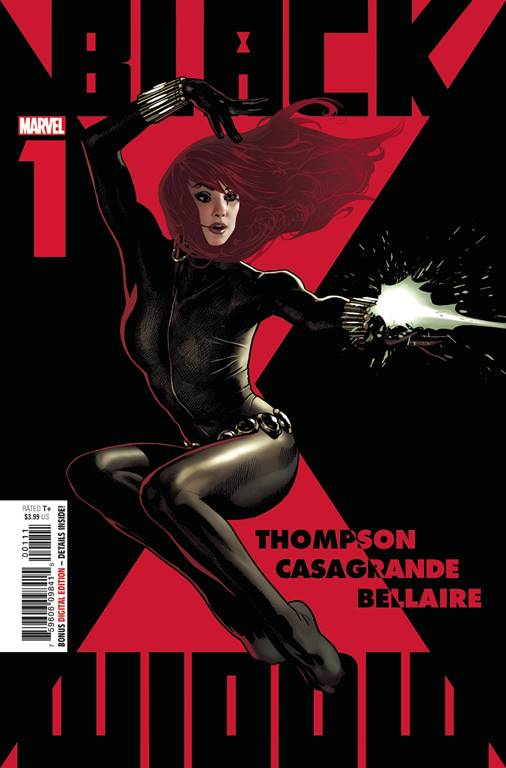