Marvel Preview: A British Team Forms To Face The King In Black In THE UNION #1

December’s arrival of the King In Black is touted by Marvel Comics as a threat to the whole universe, but the universe won’t go down without a fight. Marvel has announced a new team of British heroes will come together to face this new threat in THE UNION #1, available from Marvel in December.

Says Marvel about the new team’s mission: “to be an exemplar of what Britain can be…to show that we can overcome our differences, and work together to protect with a common purpose!” You can check out a preview of the first issue’s cover by R. B. Silva and read the full team lineup from the full Marvel press release below.

What do you think of this new team? Let us know in the Comments section, and please share this post on social media using the links below.

A NEW SUPER HERO TEAM UNITES AGAINST THE KING IN BLACK!

Prepare to meet The Union!

New York, NY— September 16, 2020 — THE UNION by writer Paul Grist (Judge Dredd, Jack Staff) and artist Andrea Di Vito (Annihilation) will make its grand debut this December! When Knull and his symbiote dragons invade Earth, the Britannia Project, a top-secret program, will assemble a new team of British super heroes. The goal: to be an exemplar of what Britain can be…to show that we can overcome our differences, and work together to protect with a common purpose!

The Union is led by the beloved Britannia, the noble warrior-hero who has long stood as a beacon for all that is best and bright in these historic isles. But despite the Project’s best efforts, these heroes aren’t quite what they seem, and Britannia may have her work cut out for her!

In addition to Union Jack, readers everywhere will soon meet exciting new UK-based heroes such as:

The Choir, a victim of scientific experiments who became a living weapon with sonic abilities: whether that’s subtle sounds to disorient people’s brains, or screams that could knock over buildings! The most tragic member of the team, she finds it hard to trust others.

Kelpie, an ancient water demon who can turn her body to water and has control over water around her. Though she seems light and breezy, she may be the most volatile member of the team.

Snakes, the muscle of the team…but also the most mysterious. He’s a man of few words–probably because he’s a telepath to boot! People are uncomfortable around him. Is he a man to be trusted?

And of course, Britannia, one of Britain’s oldest heroes. She symbolizes all that’s bright and good about Britain. If she can’t whip these heroes into a team, no one can!

Don’t miss out on an exciting new chapter of Marvel when THE UNION hits stands this December! For more information, visit marvel.com. 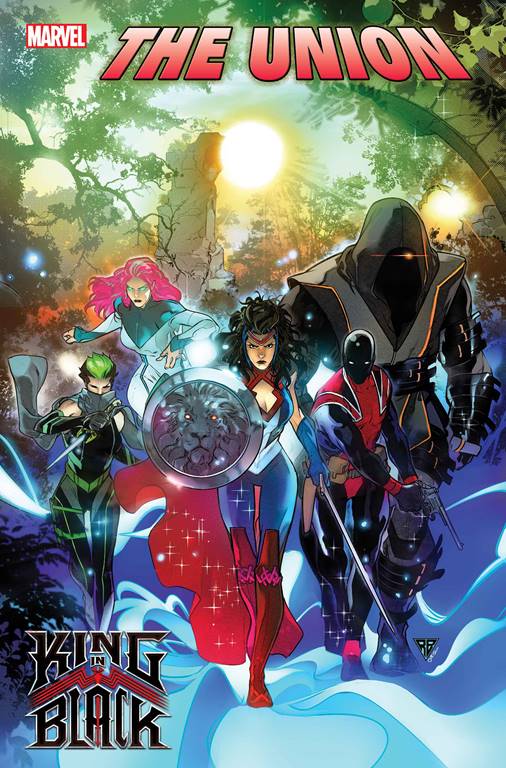