Marvel Comics readers who’ve enjoyed the X of Swords event wrapping up this week won’t have to wait long for the next chapter in Mutant history. Marvel has announced the next event from Jonathan Hickman will launch this December with REIGN OF X.

Says Marvel about the new event: “The REIGN OF X will see the forming of new teams, the return of major characters, new threats brought about by classic villains, and more game-changing revelations that will alter the X-Men mythos forever!”

You can check out a preview of the first issue’s cover and read the full Marvel press release below.

Are you ready for another Hickman/Marvel event? Did X of Swords leave you wanting more? Let us know what you think in the Comments section, and please share this post on social media using the links below.

AFTER THE DAWN COMES THE REIGN

Reign of X begins this December!

New York, NY— November 25, 2020 — Today, fans witnessed the startling conclusion of X of Swords, the sprawling crossover that represented the latest chapter in Jonathan Hickman’s grand vision for the X-Men, and learned that the REIGN OF X was upon us!

Hickman’s bold take on mutantkind began last year in the critically-acclaimed House of X and Powers of X and continued in the Dawn of X, ushering in a slate of brand-new X-Men titles that took the comic book industry by storm. Now, the saga continues in REIGN OF X, a new era encompassing the upcoming story arcs in all your favorite X-titles. The REIGN OF X will see the forming of new teams, the return of major characters, new threats brought about by classic villains, and more game-changing revelations that will alter the X-Men mythos forever! Check out what’s to come in a mesmerizing teaser image by superstar X-Men artist Mahmud Asrar!

“The REIGN OF X is upon us … and here’s a sneak peek of what it will bring! Like Dawn of X and X of Swords before it, REIGN OF X has been meticulously crafted by Jonathan Hickman and all the other uncanny X-writers of our day, and we can’t wait for you to see what they’ve cooked up!” Editor-in-Chief C.B. Cebulski explains. “In the meantime, eagle-eyed readers should take a CLOSE look at this magnificent montage of mutants drawn by Mahmud Asrar.  Everything on this image was included for a reason and will have heart-pounding pay-offs in the near future for our favorite Krakoans.  After the dawn comes the reign, and what a reign it will be!”

It all begins in December as the X-Men deal with the fallout of X of Swords and look to the future. Here’s what’s to come next month:

HELLIONS #7 by writer Zeb Wells and artist Stephen Segovia will explore the aftermath of the team’s brutal massacre in X of Swords.

Writer Leah Williams and artist David Baldeon continue to investigate mutant deaths and explore the complexities that come with resurrection in X-FACTOR #5.

Mutantkind sets their sights on the galaxy and beyond in writer Al Ewing and artist Valerie Schiti’s groundbreaking S.W.O.R.D. #1.

An old foe rises in NEW MUTANTS #14, the beginning of a wild new era for your favorite young mutants by writer Vita Ayala and artist Rod Reis.

Wolverine reunites with Maverick and Team X in WOLVERINE #8, a special over-sized milestone issue written by Benjamin Percy with art by Adam Kubert and Viktor Bogdanovic.

The search for Captain Britain is underway as Excalibur returns to Otherworld in EXCALIBUR #16 by writer Tini Howard and artist Marcus To.

X-Force will stop at nothing to protect Krakoa, even if it means interrogating their own, in the action-packed X-FORCE #15 by writer Benjamin Percy and Marvel’s Stormbreaker artist Joshua Cassara.

And Cyclops makes a fateful decision regarding the future of the X-Men in X-MEN #16, written by Jonathan Hickman with art by Phil Noto.

The future of mutantkind is here! Don’t miss X-Men history in the making when REIGN OF X begins next week! For more information, visit Marvel.com. 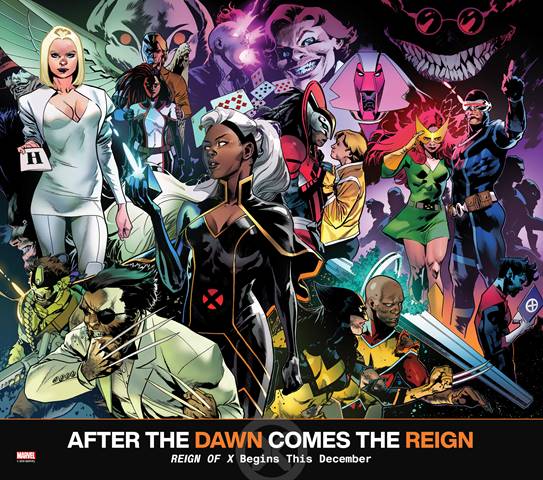