With nine days left in the Kickstarter campaign, Scott Snyder and Tony Daniel announced a new stretch goal and two new high-end reward tiers for NOCTERRA 1 Collector’s Edition. The campaign is currently sitting at $172,012, and at $200k, backers of the physical book will get a free NOCTERRA print by Jorge Jimenez and Gilded Edges for the book. The new tiers will include getting drawn into the book, speaking roles, and original pages.

“We really want to keep surprising fans, both throughout the campaign and when they read the comic,” said Snyder. “And we still have some big surprises left!”

For additional information, check out the press release below:

Scott Snyder and Tony S. Daniel Invite Readers to Get Drawn into NOCTERRA COLLECTOR’S EDITION in a Red Shirt Role on Kickstarter

(September 8, 2020) The NOCTERRA COLLECTOR’S EDITION Kickstarter campaign from superstar comic creators Scott Snyder and Tony S. Daniel is bringing fans behind-the-scenes for their upcoming series from Image Comics, with Snyder’s script displayed alongside Daniel’s linework to provide a rare look at the process of making comics. Now the hit campaign is offering a new tier that offers fans a chance to be drawn into an issue from the series’ first story arc, with a speaking role… and an untimely on page death. Backers at this tier will also receive the page of original art of that scene by Tony S. Daniel. In addition, the creators are offering 5 slots for the chance for to be drawn into NOCTERRA issues 2 through 6.

“We were surprised by how quickly the tier offering fans a chance to be drawn into issue one disappeared,” said Tony S Daniel. “And since this is a horror comic, we thought it would be great to bring our fans in on all the gruesome action.”

In addition, the creators announced a new stretch goal of $200K, which will unlock Gilded Edges for the book and a free NOCTERRA print by superstar comic artist Jorge Jimenez (JUSTICE LEAGUE) for all backers of the physical book. 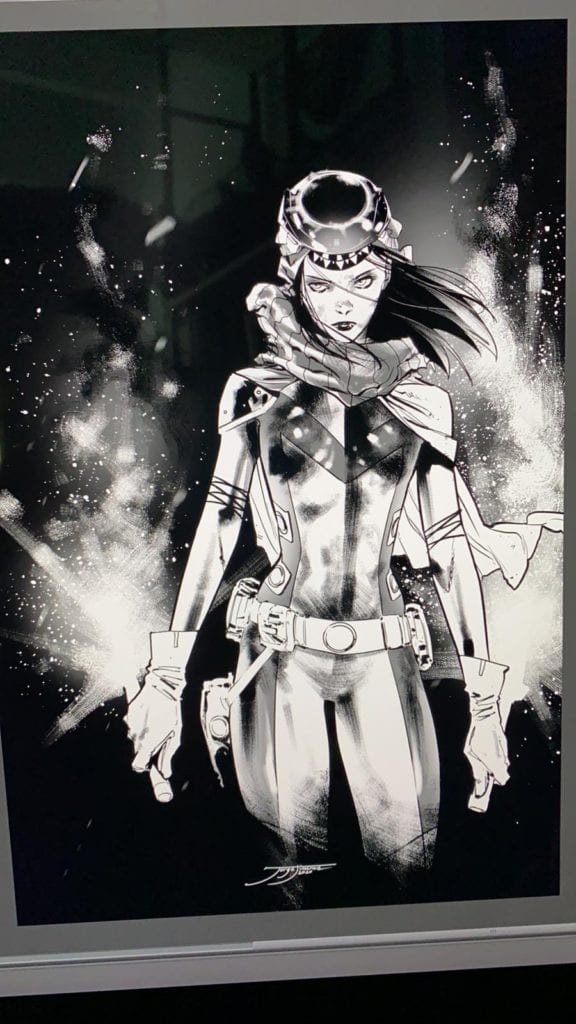 The new tiers are as follows:

Get yourself or a loved one immortalized in an issue of NOCTERRA, ranging from #2 through #6. You must provide adequate photo reference. Where and how the person appears will be at Tony’s sole discretion. You will receive a high quality scan of the art to print and frame at your own leisure, all three prints (by Jock, Francis Manapul, and BossLogic), plus a softcover! NOTE: you will NOT appear in NOCTERRA #1: Collector’s Edition. You will only appear in one of the issues between #2 through #6 which will be put out by Image next year and you will have to buy that copy separately on your own.

You or a loved one will have a speaking cameo in an issue of NOCTERRA, ranging from #2 through #6, followed by a grisly death. You must provide adequate photo reference. Where and how the person appears and dies will be at Tony’s sole discretion. You will receive the original page on which you appear, all three prints (by Jock, Francis Manapul, and BossLogic), plus a softcover! NOTE: you will NOT appear in NOCTERRA COLLECTOR’S EDITION. You will only appear in one of the issues between #2 through #6 which will be put out by Image next year and you will have to buy that copy separately on your own.

In NOCTERRA, you can still feel the sun’s warmth – it must be there – but for some reason, light no longer reaches the earth. There’s only darkness. But this new darkness, there’s something strange about it, something terrifying. Because anything – or anyone – that stays in it too long starts to change… NOCTERRA takes place ten years after the world is plunged into an everlasting night that turns all living creatures into monstrous “shades.” Enter Valentina “Val” Riggs, a skilled “ferryman” who transports people and goods along deadly unlit roads with her heavily illuminated eighteen-wheeler. When an old man promising sanctuary offers Val a job to drive him and his granddaughter up through the Rocky Mountains, she takes it, hoping there might be some truth to his claim. What she finds in the end, though, is something much more horrifying than any shade…

Starting at 72 pages, NOCTERRA COLLECTOR’S EDITION is a one-of-a-kind reading experience, with Scott Snyder’s script displayed alongside Tony S. Daniel’s linework, to provide a rare look at the process of making comics. NOCTERRA COLLECTOR’S EDITION will be released to backers ahead of Image Comics’ release of issue #1 this winter and will mark the first time that one of Snyder’s scripts has been published in its entirety.

In addition to the comic book or graphic novel, what type of Kickstarter rewards do you like? Comment below with your thoughts.