Perhaps the hottest comic book property of the last 30 years to not come out of the big two, the Teenage Mutant Ninja Turtles are instantly recognizable to just about anyone born in the ’80s who wasn’t raised under a rock. Through at least the mid-’90s, it was impossible to not see them somewhere: There were comics, three movies, a cartoon that lasted more than 300 episodes, a massive toy line, video games, a live musical tour, and a live-action TV show. The franchise has, of course, recently seen a resurgence in popularity via new comics, cartoons, and a film reboot, all of which have contributed to a new generation discovering the heroes in a half-shell. Not bad at all for something that began as a joke between co-creators Kevin Eastman and Peter Laird.

Eastman, who works on IDW’s current ongoing TMNT comic, was on hand at this weekend’s Awesome Con, a fast-growing pop-culture gathering that has gone from a sole exhibit hall in Washington, DC’s Walter E. Washington Convention Center to 75% of the building. Monkeys Fighting Robots caught up with the man behind the mutants to talk Teenage Mutant Ninja Turtles 2, the recent apparent death of Donatello, and whether fifth turtle Venus de Milo might be primed for a comeback. 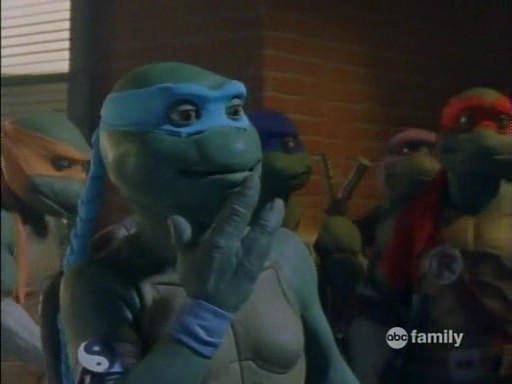 Monkeys Fighting Robots: So let’s talk about the upcoming sequel. It seems like it’s set to have a lot more of what some fans might consider the “original vision” of the turtles, with Rocksteady, Bebop, Baxter Stockman, and Krang in there and so on. Is there anything else you can reveal right now as far as what direction the films are going in?

KEVIN EASTMAN: It’s funny. What was interesting — I worked directly with Jonathan Liebsman, who was the director of the last movie. What they wanted to do was, because it was the first movie, they really wanted to make it about the origin and the introduction of April, how April met the turtles, how the turtles came to be, and sort of set everything up around the Shredder — again, going back to the original roots of the story.

When we started working on the second one, the idea was like, “OK, now that we’ve set up the foundation of the universe, let’s take it to the next level. Let’s go back and look in the turtle universe and pick out some of our favorite characters — our favorites as well as the fan-favorites.” Paramount will let me say only what you can read on Yahoo News or in the press, but  yeah, we know Bebop and Rocksteady are gonna be in it. We know Krang. They just released finally that Krang’s gonna be one of the main villains. We have Casey Jones brought into this movie. It’s a nice and natural progression in the turtle universe. I’m pretty excited. It’s neat to see how it’s coming together.

It’s interesting to see TMNT starting to get big again. Like, I can remember the first action figure that I ever got when I was three years old, back in 1989, being Leonardo. What’s it like three decades later, seeing something you created just as a joke having this kind of resurgence in popularity?

EASTMAN: That’s what’s interesting about the whole thing. [When] the idea of the turtles came together, like you mentioned, it was kind of a joke. I was a big fan of Bruce Lee, and late one night, I was just sort of like, “If Bruce Lee was an animal, what would be the funniest animal that he would be?” So I just did this sketch. The first turtle drawing was Michelangelo, so it’s a turtle with a mask on and nunchuks. I kind of put it on Pete’s desk and said, “Here’s the next big thing. Ha, ha, ha.” It was just a joke. We laughed and, out of that night, evolved a sketch with all four turtles and the title “Teenage Mutant Ninja Turtles.”

So instead of sending it around, trying to sell it to another company, we were really into self-publishing at the time, so we self-published it. And we were surprised. We didn’t think it would sell a single copy of the first issue. What’s so interesting is here we are 31 years later — 31 years ago May, the first Turtle comic book came out in a bookstore in Portsmouth, NH. So it’s funny that here we are 31 years later still talking about Turtles and the Turtles are still seemingly as popular now as they’ve ever been. It’s amazing to me. It’s humbling. It’s an honor. It’s an amazing thing to come up with something that you did out of your love of comic books and Jack Kirby and the guys that inspired us, and you create some characters that have now gone generational. It was amazing that it worked as a comic book. And it’s amazing that it worked as a cartoon show and a toy, and the first movies introduced it to a whole audience of people who are now grown-ups in their late 20s or early 30s, and a lot of them have kids of their own who are discovering the new version of the Turtles. That’s mind-blowing, at the very least. It’s pretty awesome.

Was there any point during the first surge of popularity for the Turtles where you thought that maybe it kind of got off-track?

EASTMAN: The beautiful thing about the fact that Pete and I created and controlled the Turtles, anything that was ever done with the Turtles for the first 20 to 25 years, we had full say and full control over. We wrote it for ourselves, and the original black and white comic books were edgier and for an older audience. When we started working on the cartoon show, we knew very specifically that we were writing for a much younger audience. It was Pete’s idea to do the different-colored bandanas because the animation company and the toy company wanted an easier way to tell them apart. Everything was either we worked on it directly or approved it.

We worked on all the scripts for all 300 cartoon shows and the movies. We had approval rights over the look of the characters, the use of the characters. And it’s always neat to see, even in some of the comic books, a slight deviation in the way an artist drew a turtle or how they approached the story, but we approved everything and we loved to have the creative flexibility to do some of those stories we did. But no, I don’t think it’s — everything that was done for the first 25 years of the Turtles, we had approval over.

In a recent issue of the comic, it was made to look as though Donatello might die. If any of the Turtles were ever killed off, would they eventually be brought back like, say, Captain America, who seems to die every other year and come back?

EASTMAN: [Laughs] At the end of issue 44, Tom Waltz, the head writer and an awesome, incredible talent — I love working with him — had this idea where it looks like Donatello died. Bebop and Rocksteady beat him to death through this huge fight that was going on, working on taking out the Shredder. But then when you reach 45, which came out about two weeks ago, he’s in a coma but his mind was transferred into Metalhead, so he’s now Robot Donnie at the moment.

But with all the stories from the first 12 issues, every four issues we do sort of an arc — we like to include some humor and some drama and interconnect all the Turtle universes. This last arc, we’re heading up toward issue 50, so it was a very specific point we wrote about a year ago, so you have to just wait and see where it goes. But it’s gonna be awesome.

With the current focus on strong female characters in comics and other mediums, is there a chance Venus will be reintroduced at some point?

EASTMAN: That’s a good question. I know a lot of fans really don’t like Venus. I actually like Venus as a character, and a lot of people don’t know that Venus originally started as a fifth male turtle that we were writing for the fourth Turtle movie that we were doing with New Line Cinema. When that movie didn’t go ahead, we started working with Fox Kids, and the fifth male turtle, named Kirby, was brought into that concept. At the last minute, Margaret Loesch, who was head of Fox Television, decided to change it to a female turtle. Peter didn’t want anything to do with it, so I said, “Well, I’ve already worked on all of the development, so let’s just make the best show that we can.” And I liked the show that we did for Saban. Again, a lot of fans don’t like her, but I like her, and I don’t know if we’ll see her come up in any comics soon, but it’d be fun. I think we could do a pretty cool adventure with her.

Roger Riddell
Essentially Peter Parker with all the charm of Wolverine, he's a DC-based B2B journalist who occasionally writes about music and pop culture in his free time. His love for comics, metal, and videogames has also landed him gigs writing for the A.V. Club, Comic Book Resources, and Louisville Magazine. Keep him away from the whiskey, and don't ask him how much he hates the Spider-Man movies unless you're ready to hear about his overarching plot for a six-film series that would put the Dark Knight trilogy to shame.