When we last saw our band of world-swappers, Mr. Mxyzptlk had given them an ultimatum: ALL of you swap back to your worlds willingly, or not at all. With the Justice League stranded on Black Hammer farm, fighting monsters from Lady Dragonfly’s cabin, and the Black Hammer crew being questioned by the Specter, there are plenty of reasons for them to want to get back to where they came from. But not for Golden Gail. Finally, able to return to her older form, she could stay in the DC Comics Universe as a normal woman and not live a perpetually pre-pubescent life. 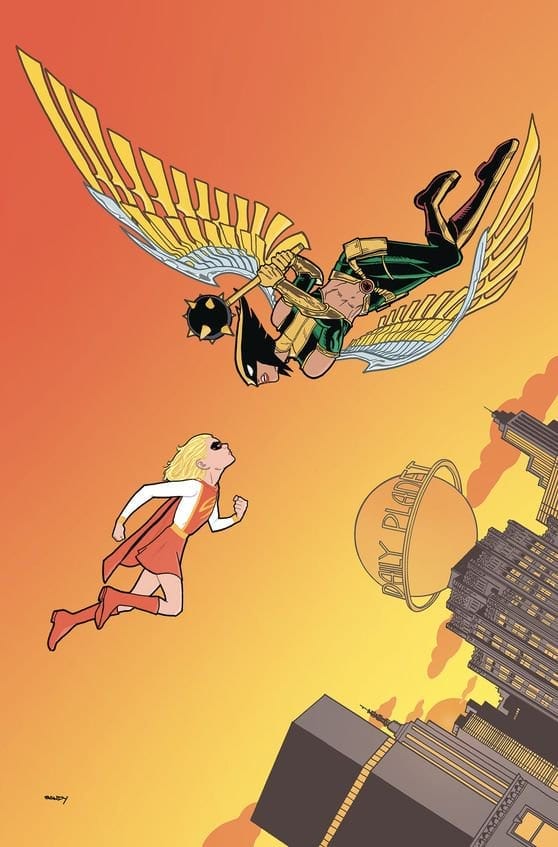 The ensuing chaos and conflict, in many ways, seems predictable and underwhelming at first glance. Heroes act heroically; villains act villainously. But the true beauty of the issue, and the series at large is the juxtaposition between Lemire’s parodies of other characters and their DC counterparts. DC’s Shazam is naive but a good kid at heart, Lemire’s version of Shazam, Golden Gail, is everything but. Martian Manhunter and Barbalien are Martians who have lost their homes, but Barbalien is resentful of his homeworld and martian homophobia.

Lemire seems to be putting his down-to-earth characters into a predictable and more simplified world to help show how they don’t really fit in with the creations he borrowed from. Their battles against huge odds are out of joint. As the issue comes to a close, Lemire offers the DC characters the opportunity to join his pace. Not for a worldwide threat, not for a multiverse destroyer, just for dinner. As characters sit and put their feet up, we see Lemire at his best. The calm back and forth over a warm meal, the real-life stakes for his larger-than-life characters. 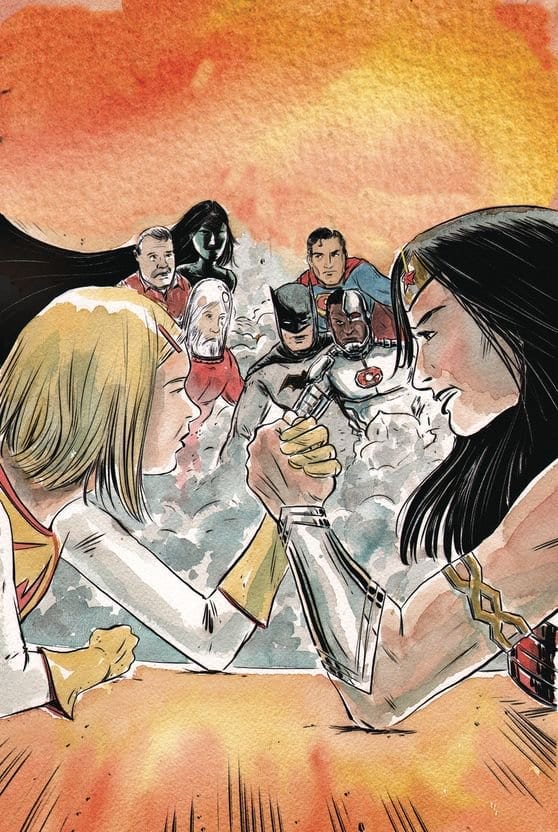 Michael Walsh’s art is simply breathtaking. It manages to blend the raw and almost messy look of Dean Ormston’s work, the original artist on the Black Hammer series, and the more neat, controlled style of art that is more often seen in comics by DC or Marvel. Throughout the issue, Walsh uses a darker pallet for his colors. It’s like looking at the characters through a blue veil. Yet somehow, it sets the mood in such a way that doesn’t feel gloomy, but relaxing and intimate. In this issue, Lemire has a pretty heavy word to page ratio. Piekos’ clear lettering and placement makes the journey through each page smooth and simple.

While Lemire, Walsh and Piekos’ crossover series Justice League/Black Hammer: Hammer of Justice may seem underwhelming at first, it’s because it is in the “underwhelming” that this creative team truly shines. In the quiet moments between the punches and zaps. This series grounds our DC heroes and reminds us why we love our Black Hammer characters so much. It reminds us that in this world heroes still cry, they eat, they sleep, and they even get scared.

The predictability of some events is hugely offset by Lemire's intimate tone and the humanity of his characters.JUSTICE LEAGUE/BLACK HAMMER - HAMMER OF JUSTICE #5: Focusing on the Quiet Moments