Check out the spookier corners of your local comic book shop and you’re sure to come across a few titles by James Tynion IV. The prolific writer not only spearheads the creepy side of the DCU as writer of Justice League Dark, but he’s also got several horror titles lurking over at BOOM! studios, including his GLAAD-award-winning series The Woods.

Recently, James announced his terrifying return to BOOM! with the title Something is Killing the Children, a spine-tingling supernatural thriller written by Tynion and edited by Eric Harburn, with art by Werther Dell’Edera and Miquel Muerto. Monkeys Fighting Robots was recently able to chat with Harburn and Tynion about the upcoming book, and just before our interview began, we received some thrilling news: Something is Killing the Children has officially been promoted to an ongoing series. Check out what the creative team had to say about the book, and its new development. 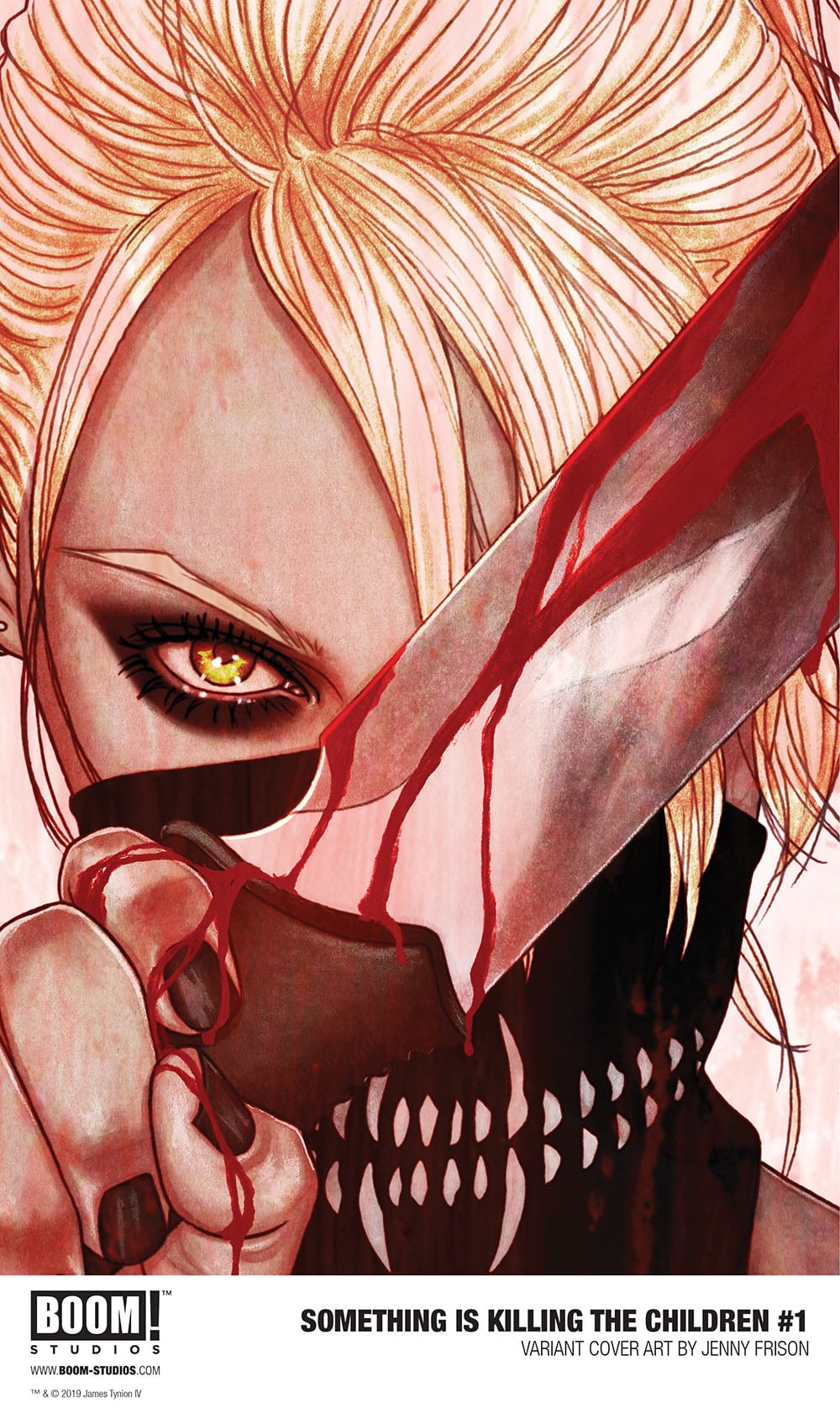 Grant DeArmitt for Monkeys Fighting Robots: Well first of all, congratulations on the story’s move to becoming an ongoing series! That is incredibly exciting news. I guess my first question is: what’s it going to be like to write a comic forever?

James Tynion IV: (Laughs) Great question. Honestly it’s really exciting. This is a story that has shifted around in terms of its format a few times. When I was pitching it at the end of last year, I saw it as a series of one-shots. Erica Slaughter, that’s our monster hunter, would arrive in a small town and would take care of a monster. People would bear witness to this strange figure who they never fully understand, then she would move on. It was in the writing of the first issue that I saw the story I was writing wasn’t actually built for these one shots. It was something bigger and stranger. It was something that would live in the quieter moments.

Now the story is finally in its true form, what it always should have been. It’s this long-form horror novel in a comic book. There is an ending to the story, but the ending is now further out. We’re going to really be able to live in this world, in this town of archers Peak. I’m really excited about that.

MFR: Yeah, I read that this was a story that was brewing in your head for a while, so this is very cool. Now, onto the first issue of SIKTC: One of these characters seems to be semi-autobiographical. This kid’s name is James, he has long black hair and glasses, and he loves telling spooky stories. Am I correct in assuming that that’s you, James?

Tynion IV: Yes, that is absolutely correct. It’s funny because honestly, I could give a whole bullshit answer about how “this is me trying to tell this autobiographical story,” but the truth is when I was writing that first scene I didn’t know what the names of the kids were going to be. So I plotted in the names of me and my closest friends from when I was growing up.

But that just changed the emotional intensity of the book for me. For a long time, even into writing issue two, I would talk to Eric and say, “I’m still thinking I might change the name as the main character. It won’t be James.” But the character forming there is kind of this miniature version of me, circa 8th grade. That felt more authentic, and it means that I can get into a fictional version of myself’s  mind pretty easily. It really opened up the horror of the series too. I remember how it feels to be afraid at that age. That’s where my whole fascination with horror comes from. So it’s me tapping back into that. 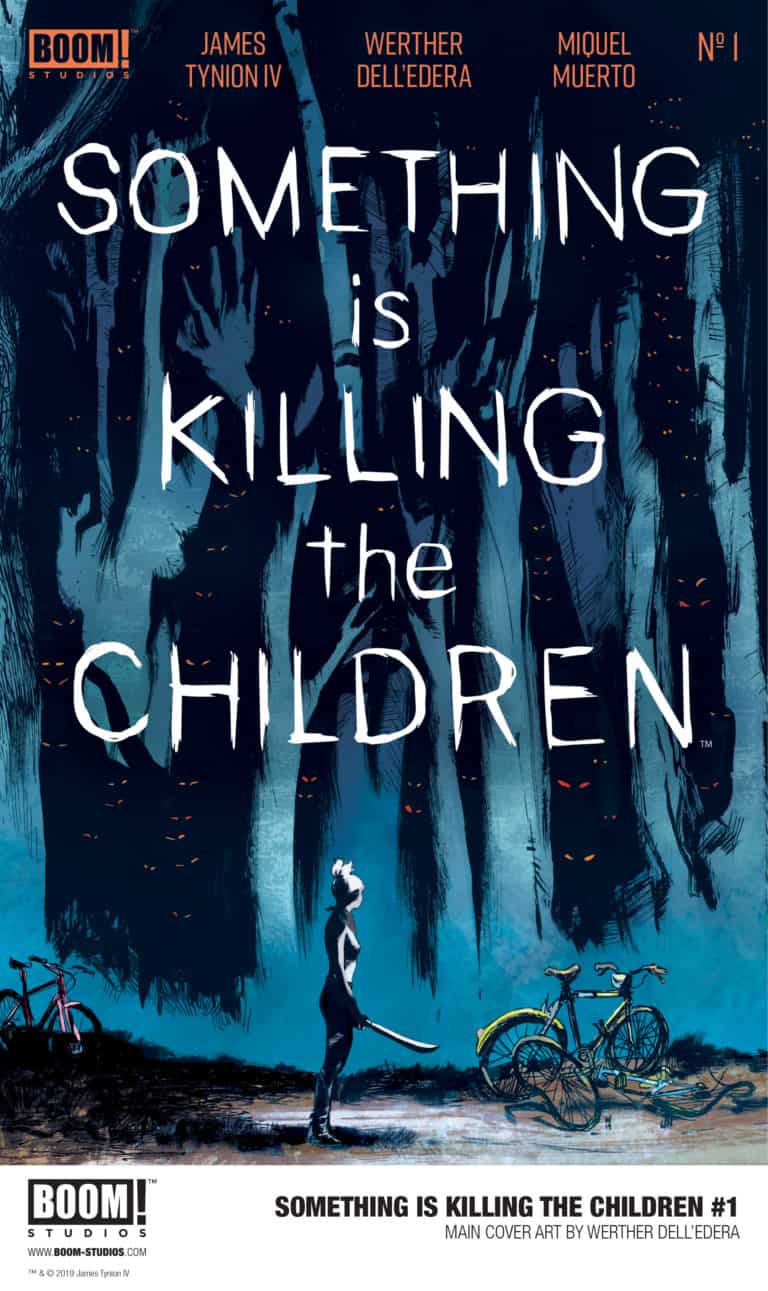 MFR: So the key to the horror of this piece is what you grew up scared of?

Tynion IV: In a way, yeah. Not in a literal sense; I wasn’t afraid of monsters coming out of the woods and murdering me and all of my friends. But the monsters in [this story] represent a larger type of fear. It’s the fear of threats that you don’t really understand, of something out in the world that you don’t know about,. And when you try to explain it to the adults around you, they can’t really see or they can’t put themselves in your shoes. And so you feel vulnerable. It’s those types of fears that really build up inside you.

In this story, those fears become something more in a very literal sense. We’ll learn a lot about the nature of these monsters and also why, in the world of this book, adults can’t see these monsters.  The only adult who can see them is Erica Slaughter. And the reason she can see them, which is part of the mystery of her character, will now unfold over the whole long-form series. I’m excited to dig in deep and go to some pretty dark places with it.

MFR: So James, you obviously have a very long history with this project. But Eric, what’s your history with Something Is Killing The Children? Where do you come into the project?

Eric Harburn: I think the first time James told me the title was probably about five years ago. This was, I believe, in Emerald City in 2015, maybe 2014. I can’t remember exactly. But I knew, even way back then, that it was a scorcher of a title. I think it might have gone through a few different iterations before we finally started working on it together late last year. I’ve been working with James for six plus years now; we worked on The Woods together, we worked on the Apocalypse trilogy, we did a book called Ufology together. In the last year or so, we’ve been gearing up toward the next slate of titles, this next phase of James’s career in creator-owned comics, with his BOOM! collaborations. Something is Killing the Children felt like it was an excellent vanguard title for what James is doing here.

So we’ve been talking on and off about the book for a while, but we’ve been in production on it coming up on a year now. Probably last October was when we first hit pedal-to-the-metal and James whipped up a story document, plus a description of Erica Slaughter as this ghostly, ethereal protagonist for this book. It’s bloomed from there.

MFR: Is that where artist Werther Dell’Edera comes in, once you have that very iconic image of Erica? She’s got this fantastic character design. Was that something that he came into it with, or did you have that idea in your heads?

Tynion IV: There was an image of her that was forming in my head. It was of this blond woman with her hair parted over one eye to cover this scar on the back of her head. It was also the idea of the sleep-deprived, shadowy eyes. The idea of someone who has just been doing this for so long, and you can see the effects of it on her. Once we brought Werther onto the book, we started talking about the character, and in the first few sketches he added a few of these elements that really brought her whole design together. It was Werther that came up with the idea for the bandana with teeth on it. He gave her the “strange” vibe.

Tynion IV (continued): So much of the book is grounded in the real world. It exists in a space that you can really touch and feel and live in. [Erica] is the character who looks like she’s almost from a different comic book. That was part of the idea, we wanted her to be a little out of place. And Werther just captured that so effortlessly. The other person that’s just an inexorable part of this creative team is our colorist, Miquel Muerto, who just has brought this series to life in such vibrant color. I’m so excited about this world that we’ve started building together.

MFR: All right, last question. This first issue deals with the spooky stories that we tell each other as kids. That’s the opening scene, a bunch of kids telling stories to freak each other out at a sleepover. So I was wondering from both of you, what is the spookiest story you remember telling your friends or your friends telling you when you were a kid?

Tynion IV: The scene at the beginning of this comic is very true to life. [My friends and I] would prompt each other to tell these scary stories. The exact story that the character James tells isn’t the real thing I remember telling, but I remember sitting in my room and staring out into the forest it just freaking me out. I had a very active imagination, and I would just imagine these things coming out of the forest. It was always something different. I made up different things to be afraid of. For a long time I couldn’t even watch horror movies, because if I let my brain alone I would get scared. More than anything, that is the genesis of this project. It’s also the thing that guided it into its current form. It was writing that first scene that made me see what the series needed to be.

Harburn: I’m kind of similar. I didn’t grow up watching horror movies, I was kind of a wuss as a kid. I probably saw some a little too early. And now I work on ten horror books? I don’t know how the hell that happened. My earliest memory of…well, it’s not even a horror movie, but I was watching Gremlins with my parents and I just couldn’t handle it. When the lead character goes into a, what is it, a laboratory? I had to run out of the room. I think it was probably another five or ten years before I started watching horror movies again.

(Laughs) So this book right up my alley.

Pick up Something is Killing the Children at your local comic book store on September 4th. Once you do, let us know what you think of it in the comment section below, or over on our Twitter page. For more on this comic, and for every other title you love, stay tuned to Monkeys Fighting Robots.