Tartarus #1 hits your local comic book store on February 12, but thanks to Image Comics, Monkeys Fighting Robots has an excellent interview with the creators of the series Johnnie Christmas and Jack T. Cole.

A new adventure series with all the sci-fi drama of Breaking Bad set in Mos Eisley! Promising young cadet Tilde is framed for crimes against the empire after discovering her mother was the ruthless warlord of the deadly colony Tartarus, a vital player in the galactic war. Now, Tilde’s only way home may be to reclaim her mother’s dark crown. #1 New York Times bestseller JOHNNIE CHRISTMAS (Alien 3) and artistic phenom JACK T. COLE (The Unsound) kick off this ongoing series with 44 big pages of story.

CHECK OUT THE INTERVIEW BELOW.

MFR: With a book like TARTARUS, how much world-building is involved?

JOHNNIE: On the writing side, quite a bit, in terms of history and setting. The tech that gave rise to the start of their civilization and its implications. But then I switch focus to the emotional arc of our characters and let Jack take the lead on designing the world. How those technologies evolve and how they’re implemented through his visual depiction of the world.

JACK: Quite a bit. There’s a lot of ideas that Johnnie and I will collaborate on to come up with, and then there’s a bunch of others that Johnnie comes up with, and I figure out how to render, and then another bunch that I figure out and put in to fill things in that I would like to see. For instance, on the space station the look of some of the computers that appear to be made out of a liquid is something that Johnnie and I came up with together, but Johnnie didn’t specify the look of the computers, or if they even needed to be these liquid computers, so it was up to me where to put them in and how they would appear and function in that instance.

Otherwise on my end I research buildings, objects, and styles before I get started on a drawing a panel or a character. Fundamentally world-building is just passive storytelling, so my goal with any world-building is to tell a story in the background that is concurrent with the main narrative and accentuates it. Storytelling like how people in the story dress, or what the advertising on their businesses looks like, or how their streets are designed. Things that your brain will pick up even if they’re not pointed out, and make the main narrative richer, ideally without distracting the reader in the process. 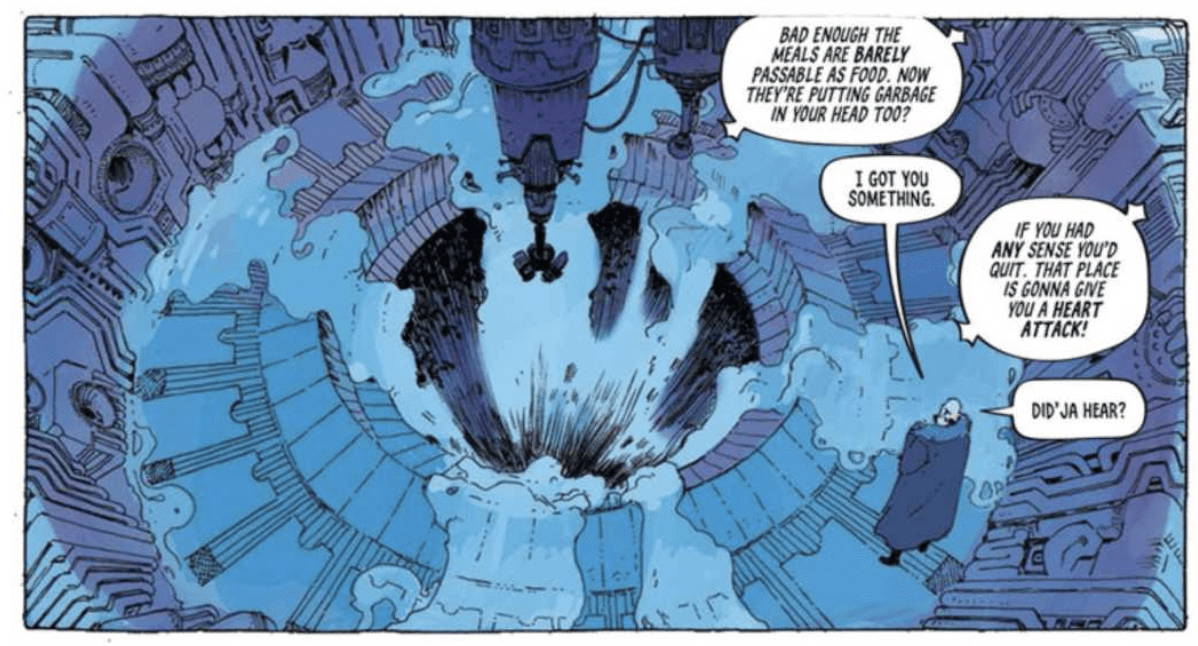 MFR: Johnnie, talk about your relationship with Jack since you are both artists. Are your scripts very detailed, or does Jack have a lot of room to play?

JOHNNIE: I have quite a bit of detail in terms of emotion and feeling. We have beats that have to be addressed on the road to where we’re going, for this arc and the series at large. But when it comes to a fight, action scene, or two characters having a long convo, we’ll switch to “Marvel Method,” and Jack fleshes it out. I won’t depict where each punch will land; I’ll write something like “Good Guy is fighting Bad Guy. Should feel desperate. Bad Guy wins but is missing a tooth.” and leave how that unfolds in Jack’s capable hands.

MFR: Jack, one aspect of your art that stands out is how detailed the world around the characters is. Why is that important to you?

A detailed world when well done creates an experience that is larger than the sum of its parts and creates a space where the reader can go beyond what it is presented and in a way be a co-collaborator with the world.

MFR: Johnnie, with the first issue, how do you balance revealing enough to engage the reader and leaving enough mystery that the reader wants issue two immediately?

JOHNNIE: I try to focus on what motivates the characters in the moment. If it’s truthful, the moment to moment is interesting, since our characters have pretty strong desires. But all the while I’m planting seeds that will bear fruit that we’ll harvest in following issues.

MFR: Jack, can you talk about the vivid color palette of the first issue?

JACK: I was just coming off of THE UNSOUND, where I had been using color in abstract ways to heighten emotional tension and create odd moods. Additionally, I was sort of obsessed with comics from the 70s, 80s, and early 90s at the time and their color palettes, and how stark they could be, and how when the right palette came together it is genuinely divine. Issues 1 through 3 readers will see some more of the influence of this fixation, but recently I realized I had almost forgotten how to use brown and grey in my pursuit of this direction, so I’ve circled back around!

MFR: The title logo for TARTARUS #1 does not scream science fiction, what are the origins and meaning of the logo?

JOHNNIE: We worked with the talented Rian Hughes on that. I gave him the series pitch, a synopsis, and sketches of what Jack had planned for the first issue cover. What became our final logo was in the first round of ideas. I liked the strength and authority connoted in the columns up against the delicacy of the flowers and the deadliness of the thorns. It says, “TARTARUS, tough but pretty.”

MFR: How hard is it to create a main character that readers can connect with, and is Tilde on a “hero’s journey?”

JOHNNIE: I guess I’ll see how well they connect with readers eventually, ha. But I think by giving our cast simple relatable desires is the key. Surka wants out of the clink. Tilde wants to go home to take care of a sick loved one. Klinzu wants to go on a hot date with a cute person, and Sevno wants to be good at his job. Stuff everyone can understand and relate to. If we follow what they want in a truthful way, then I’m hoping it’ll connect with folks. At least that’s the plan.
And Tilde is kind of on a hero’s journey, to begin with: She starts in the normal world, there’s an inciting incident, she begins her journey, then the descent into the cave. And that’s where things may start to diverge from the usual hero’s journey. The cave in TARTARUS is very deep.

JACK: It’s tough to know the extent a character will connect or not until people actually read it and a whole variety of complex factors come together. On my end, I try to come up with designs that have some appeal, and give the characters different sets of gestures to help convey their “character” and hope that readers will connect with it.

MFR: TARTARUS is an ongoing series; how far do you have the story outlined?

JOHNNIE: Just because I like to know where I’m going, I have a scratchy outline for the first four arcs. If we get there or beyond is entirely up to reader reaction. We also know the endpoint of each character’s narrative. Though sometimes characters have a mind of their own and decide to go their own way…

MFR: Independent publishing is a tough business. How will you measure success with TARTARUS?

JOHNNIE: Readers. They are the Alpha, the Omega, the measure of success. If they love it, if they buy it, if they talk about it with their friends, everything else will take care of itself.

JACK: If we have enough of a readership that allows us to sustain the story, that’s definitely a big success!

MFR: Thank you again for your time, and best of luck with TARTARUS!

JOHNNIE: Thanks so much for talking to us!

What did you think of the interview, are you going to add Tartarus #1 to your pull list? Comment below with your thoughts.

Tartarus #1 will also be available for purchase across many digital platforms, including the official Image Comics iOS app, Amazon Kindle, Apple Books, comiXology, and Google Play.