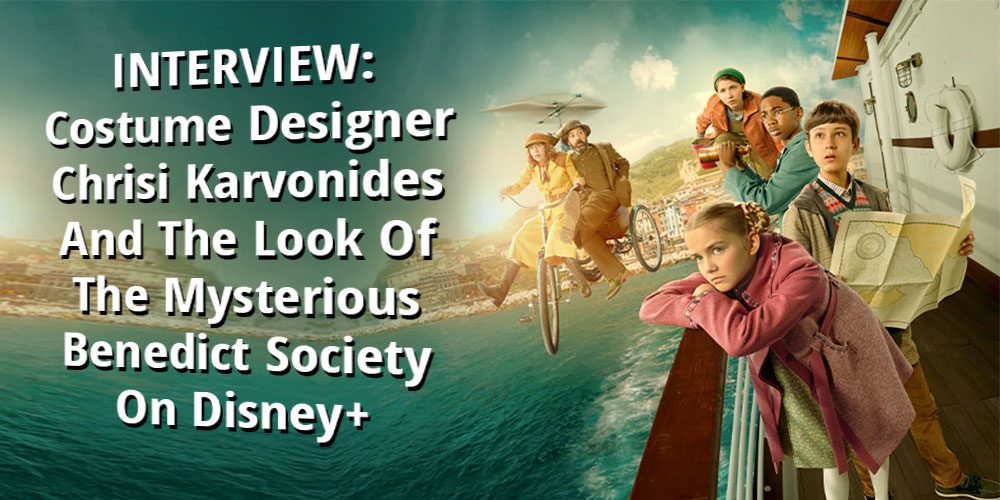 The Mysterious Benedict Society is a Disney+ series based on Trenton Lee Stewart’s children’s books, where four tweens unite to thwart the bad guy. The second season ends this week, and costume designer Chrisi Karvonides discusses the collaboration involved in making the unique look of the show work.

“Reynie” (Mystic Inscho), Kate (Emmy DeOliveira), “Sticky” (Seth Carr), and Constance (Marta Kessler) are either orphans or outcasts recruited by a mysterious and narcoleptic man known as Nicholas Benedict (Tony Hale). Mr. Benedict chose the children because they possess innovative, intelligent minds and unique, complementary skills. Reynie is super-smart; Sticky remembers everything he reads; Kate has a bucket of tricks, and Constance, the youngest member, is surprisingly brilliant. Through season one, the kids learn to become a team. Then, in season two, they take things across the Atlantic.

PopAxiom spoke with Chrisi Karvonides about her career and living on set to get The Mysterious Benedict Society done right.

“I started in fashion for a hot minute,” costume designer Chrisi Karvonides begins her story. “I worked in New York. I got in very young, at 17; I worked in the sweatshops,” she laughs. “I realized I did not like it.”

Chrisi loves storytelling, and “fashion was more about telling the trends. So, I got out.” But undeniably thinks of it as an essential part of her learning process. “I learned my skillset in New York at FIT and the shops.”

“I went to Emerson for costume design, then NYU. A huge scholarship took me to Yale. I had a broadway show, Two Trains Running with August Wilson,” she continues, then turns into a consequence of all that outstanding higher education. “I had big student loans to pay back, so I moved to the west coast to work on films; as an assistant designer, lots of sci-fi, big sci-fi films. I became a costume designer for things like From the Earth to the Moon, Big Love, and Carnivale with HBO. After that, I moved to Fox to work on the first season of American Horror Story.”

Theatre and a film set are similar, but “the pace is different. Every ten days, you have a new story, a new ‘play’ to design.”

“I love designing for episodic TV,” she gleefully asserts. “I love the pace. I love making it become a reality.”

Theatre is never too far behind, and neither is another passion. “I still design for theatre three decades later. But, in the last decade, I’ve been able to pursue my first and foremost love — opera. I design for opera in both Europe and the States.” 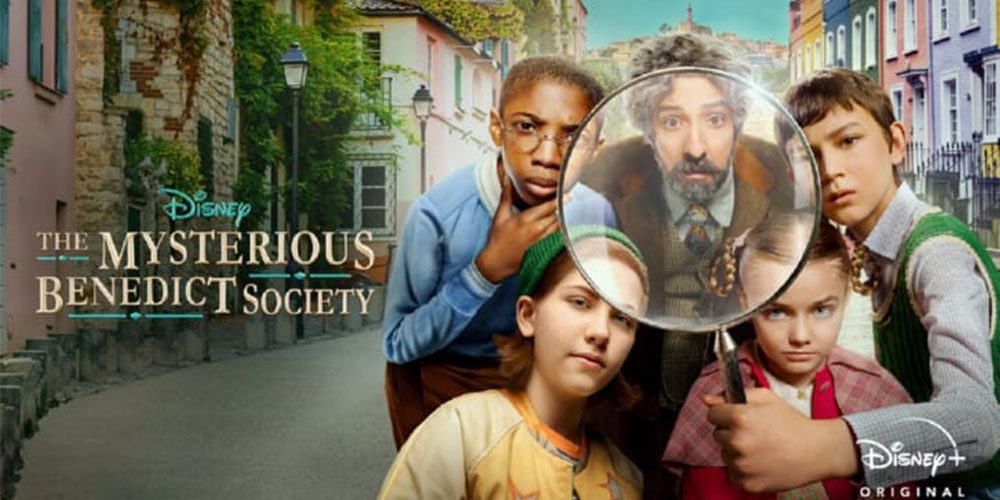 About The Mysterious Benedict Society

How did Chrisi become part of The Mysterious Benedict Society team? “It’s a lovely story. Big shoutout to Care Adair, who was the season one costume designer. She went on to the HBO Perry Mason, so she pulled out of season two. But she set the tone, and it’s quite magical. She called and asked if I’d consider interviewing.”

“At first, I didn’t know anything about it,” she says, “But once I saw that nod to the Wes Anderson aesthetic and filmmaking, I was so excited. I want to be in television storytelling that allows for costume creativity, and this doesn’t get any better.”

Watching even a frame of The Mysterious Benedict Society tells you all you need to know about how cohesive a show it is, and that’s because of incredible collaboration. “What’s incredible is you have these four writers that are so engaged and involved; they want to convey this magical realism, a non-specific period. Almost an artificial reality with a nod to the 60s and 70s.”

“To achieve that, you need an incredible amount of collaboration, so we’re not going down some rabbit hole where the show ends up being orange or grey. It was a daily communication with [production designer] Cynthia, constantly working with each other.”
Chrisi shares an example. “Originally, Mr. Cutain’s space was supposed to be a coral or ochre color. But the guys wanted it to be calming and gravitate towards blue. But they also really wanted his costumes to be in the blue world. So Cynthia and I figured out how to separate. She’d go darker in the background if I were lighter, and vice versa. It was a weird tinge to the blue, like a blue-green we both embraced.”

“We call it cross-boarding,” she says about how they shoot the show. “We do two episodes at the same time. But working with young actors, we found it difficult to do that, so we tried to keep things more in sequence. It helped the young actors with plowing through their scenes.”

Season two of the series takes the Benedict gang aboard the Queen Mary to England. “We filmed on the Queen Mary in Long Beach. It’s a huge setup to be there. The elevator wasn’t working, so they had to move all this film equipment up six flights of these narrow, iron staircases from the 1930s.”

“It was quite a feat,” she declares and shares more about life on set. “We camped out there for ten days. Two costume trailers, my whole crew including stitchers and seamstresses.”

Ideally, costume designers like to pre-fit background performers ahead of time, “but that wasn’t working out. COVID was ripping through, so we had a lot of restrictions. Not as bad as 2020, but it was complicated.”

“About a third of the people we dressed head-to-toe on site,” she says, and there’s no way to emphasize the number of costumes and detail involved in season two. “My favorite part of season two is that so much takes place on the ship. We created, you don’t see it that much on screen, but we created the entire ship’s crew, from Captain Nolan to the sailors, patches, and signage. The guys working down in the engine room with the boiler suits. We made all the life jackets. So it was about 100 costumes just for the ship’s crew.”

How much time and people-power was available for all that work? “Two weeks. We had about sixteen people on my crew. The whole crew was talented and creative and had something great to contribute.”

“In Benedict, the way it’s shot and how they line things up it’s beautiful. It’s so inspired by the way Wes Anderson does his movies,” she gushes about the show, and that energy is alive in every episode.

One thing Chrisi loves about the show is what she calls puzzles. “There are verbal puzzles, and her team loves working on visual puzzles. Take Kristin Schaal’s character, her name is Number 2 because of her birth order, but she also felt that the name correlated to a number two pencil. So it’s given that it’ll be a saturated, warm yellow color. When we shift from there, it might be a bit of a burnt orange like the top of an eraser.”

“My other was Constance,” she adds “we wanted to keep the pink coat. We had a backstory that you’ll never hear where she got a new coat from Number 2, and it has scraps from the old coat as part of it. So we go into a new coat, embracing her character’s age which was now like 12. From there, we stayed in that color, then went around the color wheel to figure out everyone else’s colors.” 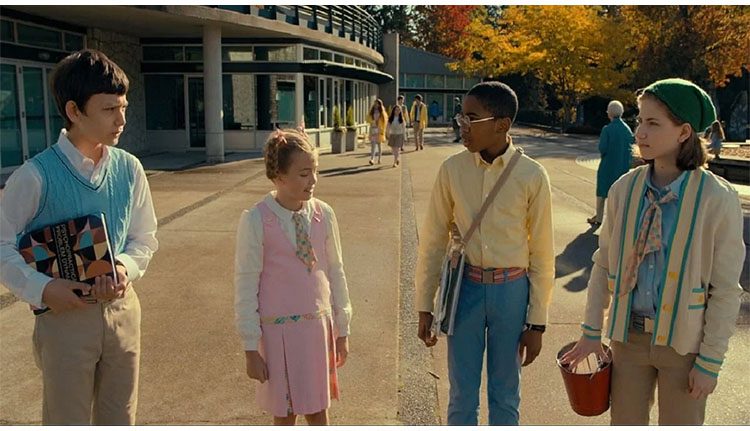 Who inspires Chrisi, past or present? “Oh my goodness, that’s a very long list. I would feel terrible missing out on someone,” she laughs, then thinks a moment. “I can give the nod to when I was a kid, the big costume designer I admired was Milena Canonero. Then, of course, Colleen Atwood.”

“Some I admire because they get to do a lot of magical realism,” she says. “Maya Rubeo, who was nominated for JoJo Rabbit. That’s that same thing where it’s a whimsical or nostalgic nod to a time in history, but her sense of color and composition is incredible. She also designed for Avatar and all the jewelry the Navi wear.”

Chrisi’s a fan of creators like Taika Waititi, who she says is doing a lot to elevate heightened reality, which I love. I’ve done a lot of realism, so it’s fun to explore those possibilities. Guillermo Del Toro’s work as well. His journals are fantastic. It’s a combination of his beautiful handwriting with all these drawings. I want to work in that kind of milieu. I love opera; it allows for more artistic freedom.”

Season two completes its run and is available on Disney+. So what’s next for Chrisi? “I’m hoping for a season three. I’m in the middle of designing an opera for the Royal Swedish Opera that’s based on Lars Von Trier’s film Melancholia. It’s part of that heightened reality, non-period defined. The music is quite incredible.”

Is The Mysterious Benedict Society on your watch list?

Thanks to Chrisi Karvonides and Metro PR
for making this interview possible.