Interview: B. Clay Moore Takes Us On A Thrill Ride With KILLERS #1

KILLERS #1 hits your local comic book store on July 31, but thanks to Valiant Entertainment, Monkeys Fighting Robots has an exclusive interview with the writer of the series B. Clay Moore.

The first issue of KILLERS is all the best parts of a James Bond film with intense action and a few twists and turns. So, it was fun to dig a little deeper into the writing process with Moore. Check out the full interview and a five-page preview below.

MFR: Clay, thank you for taking the time to speak with Monkeys Fighting Robots. Killers #1 reads like a James Bond film, what are the elements that make up a good thriller?

MOORE: First and foremost, I think there has to be some connection to the characters, even if you’ve just met them. Even the greatest action sequences don’t work if the audience isn’t concerned about the personal stakes involved.

Beyond that, I suppose there must be a goal or set of goals that can only be achieved with difficulty.

Hopefully, those elements are all present in KILLERS.

MFR: The story in Killers is a mystery, how do you balance letting the story unfold but not revealing too much?

MOORE: I think the key is trusting that the audience is interested enough in the characters to let the characters lead them into the story. Obviously, you have to reward that interest by developing the story as you go, ideally through the eyes of the protagonists.

MFR: The book is intense and full of action, talk about what Fernando Dagnino brought to the table? Do you have a favorite page from the first issue?

MOORE: Fernando excels at action, but never loses sight of the characters while doing so. I think the stuff I like best is in the London rain. Evocative of the best noir.

MFR: KILLERS is a five issue mini-series, how do you handle pacing versus page count?

MOORE: That’s a good question, but one that’s kind of hard to answer. After writing a lot of comics, I’ve sort of developed an internal sense of pacing. I can usually tell if there’s too much action plotted to allow an issue room to breathe. I also tend to think of single issued as stories within the story, and do my best to build toward a climax that hopefully leads readers into the next chapter.

MFR: JOHN WICK 3 is the most profitable of the series, with the fourth film in production. Killers #1 quickly gets you attached to the main characters, who are assassins. What is it about assassins that society loves so much?

MOORE: I think people respond to assassins with some indication of depth of character. I’m sure there’s some part of everyone that imagines being able to break away from the rules of society, and who exemplifies that better than someone breaking society’s most rigid moral and legal code? Of course, to really make an assassin compelling, you’ve got to pit him or her against someone worse than themselves, so the villain seems to be just as key.

MFR: Speaking of action films, if you were writing a script for a buddy cop film who would be your lead actors and why?

I could probably answer this a dozen different ways.

Here’s an odd couple that I think could work: Give me Danny McBride as the cynical veteran and Mindy Kaling as the “just made detective” by-the-book partner.

MFR: Again, thank you for your time and best of luck with Killers!

What did you think of the interview? Comment below with your thoughts. 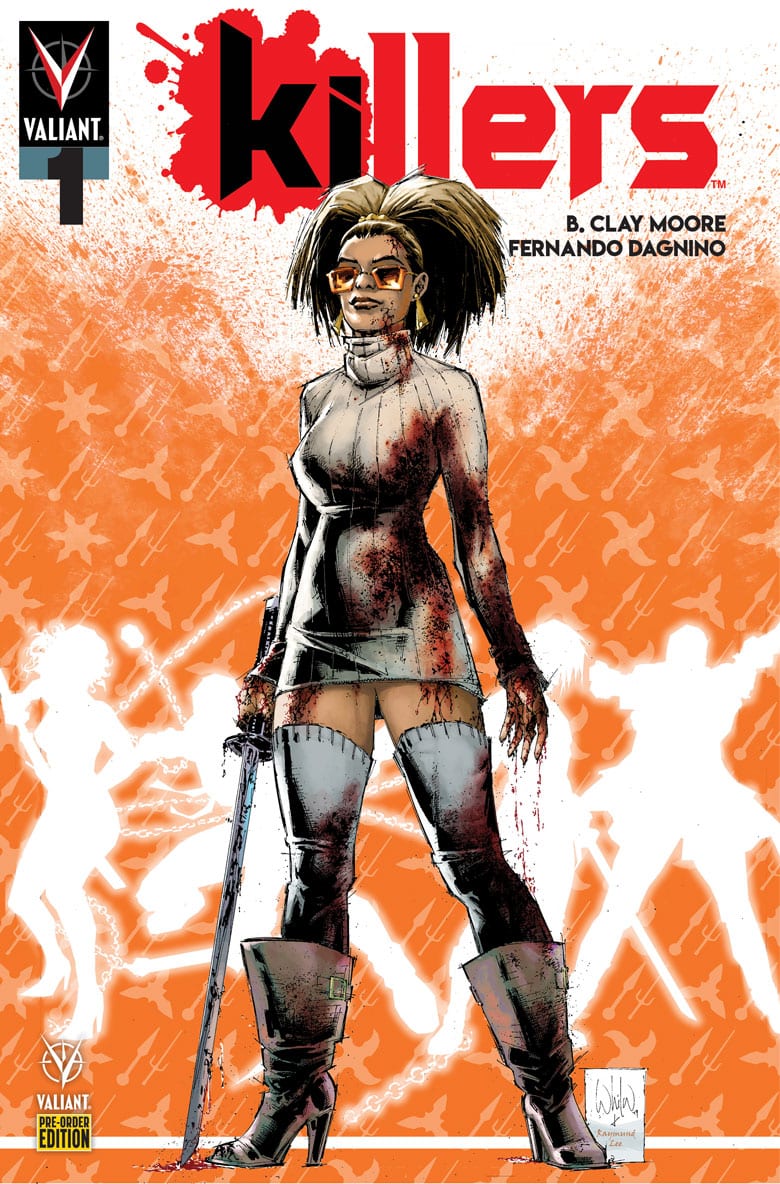 KILLERS #1 hits your local comic book store on July 31, with a final order cutoff of July 8. If this sounds like a book you want, make sure to tell your comic shop.

KILLERS #1 is written by B. Clay Moore, with art by Fernando Dagnino, colors by José Villarrubia, Jeff Powell’s letters, and the four covers are by Jonboy Meyers, Diego Bernard, Ken Lashley, and Whilce Portacio.

Five deadly assassins are recruited into a game of cat and mouse by their former sensei, the mysterious Jonin! But what does the Jonin want from them, and what do they gain out of helping him? Each of these assassins can channel their ki—the spiritual energy within all beings—in different ways, granting them incredible powers, essentially making them “super ninjas!” 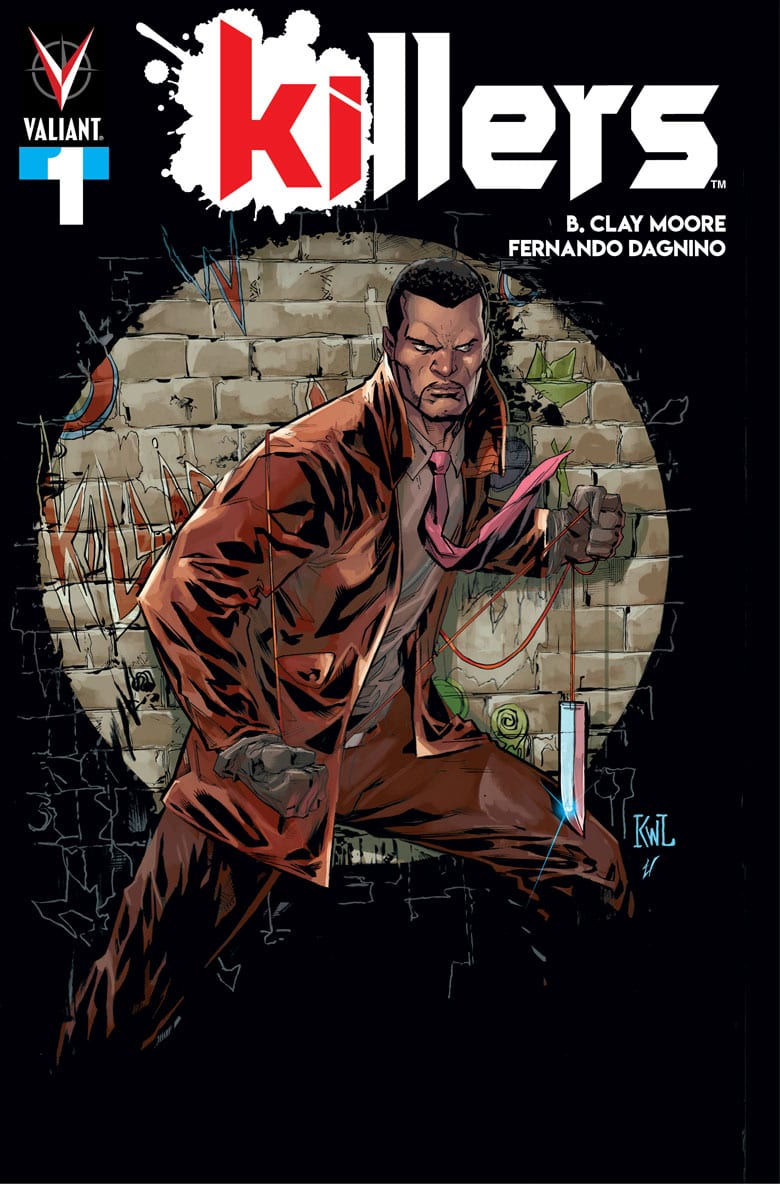 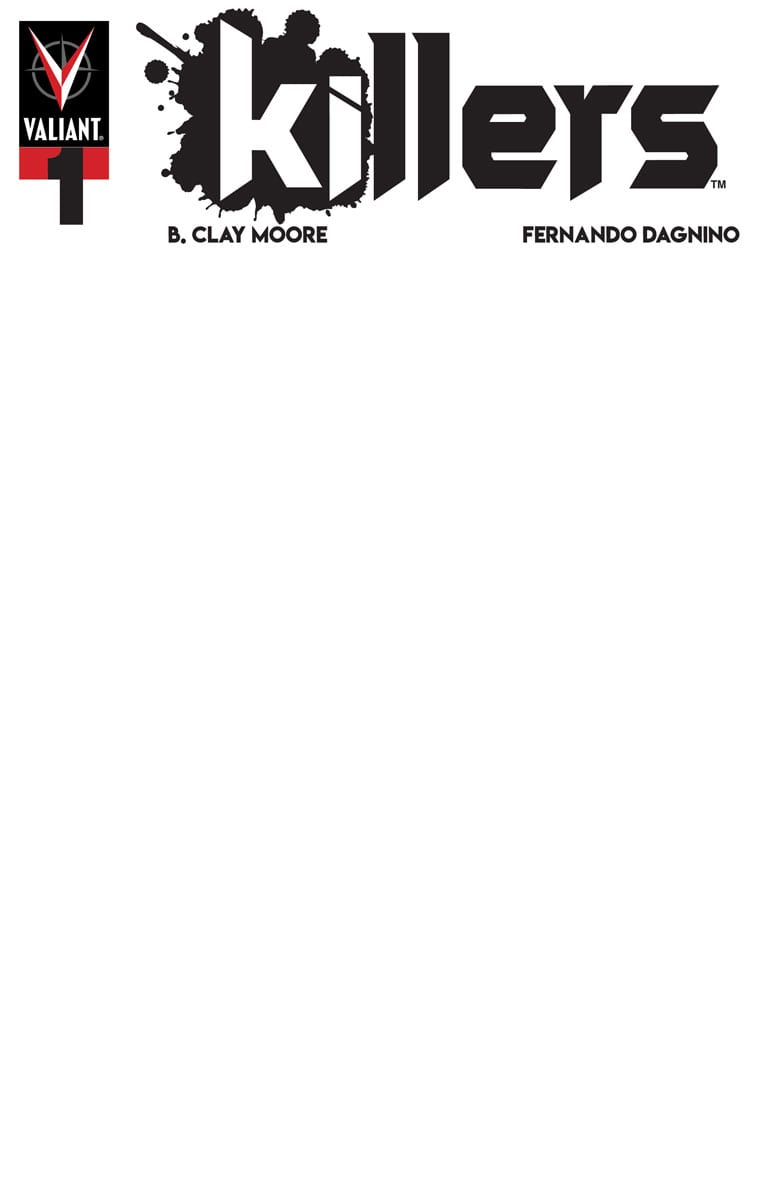 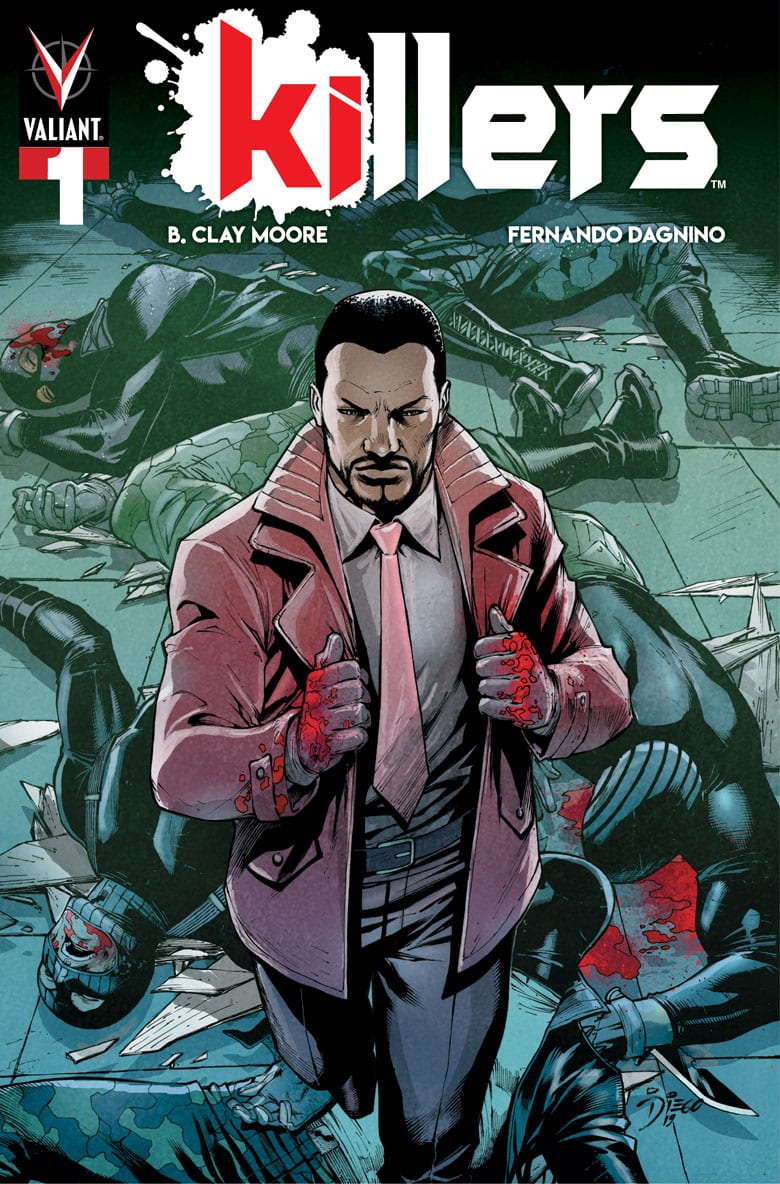 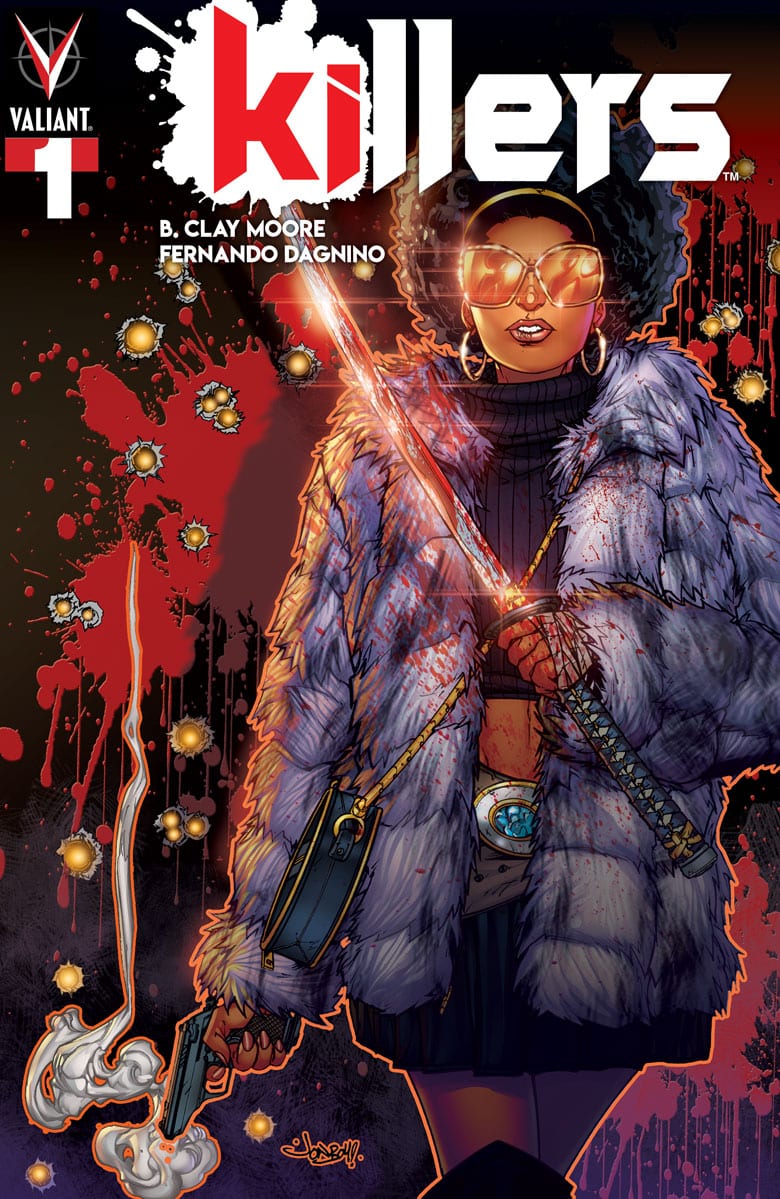 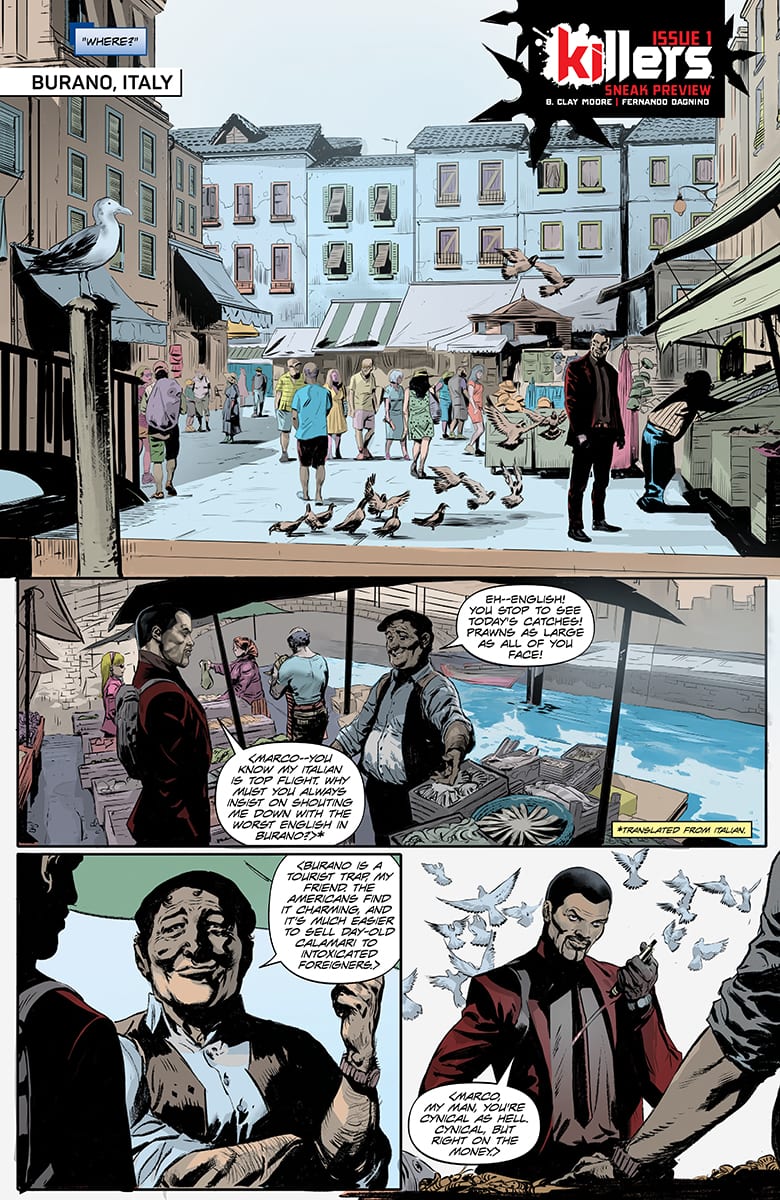 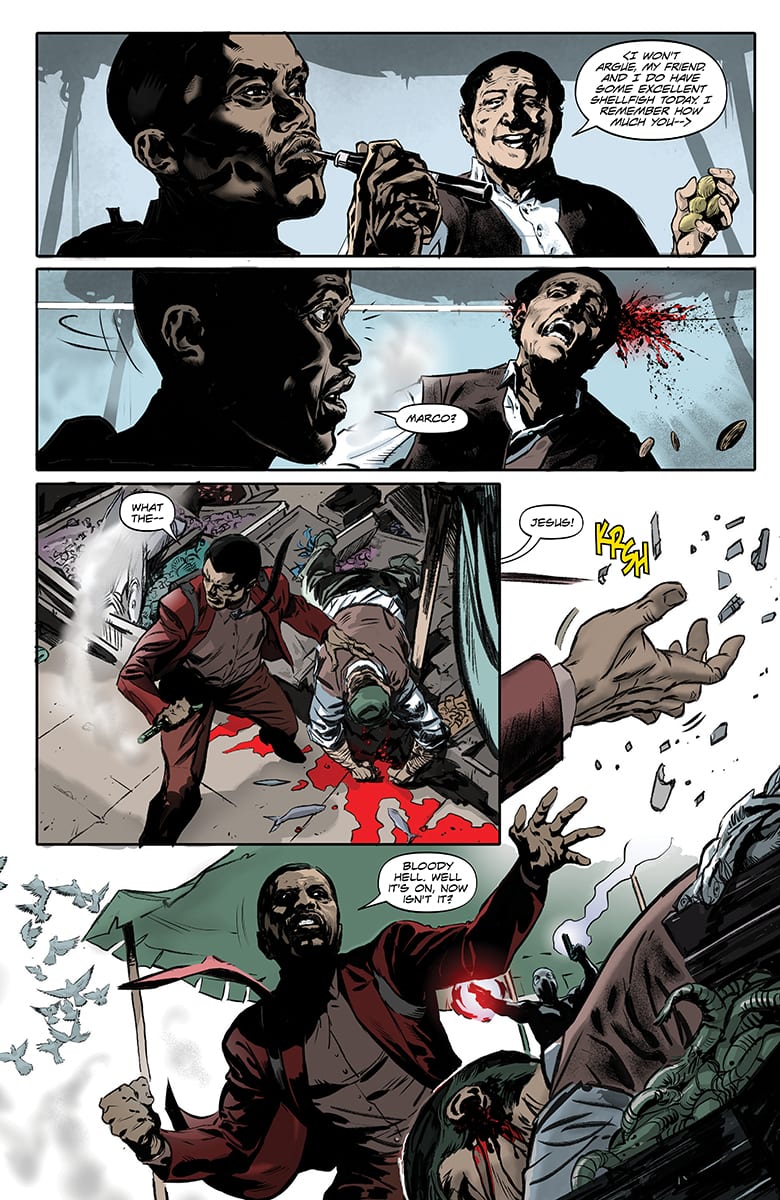 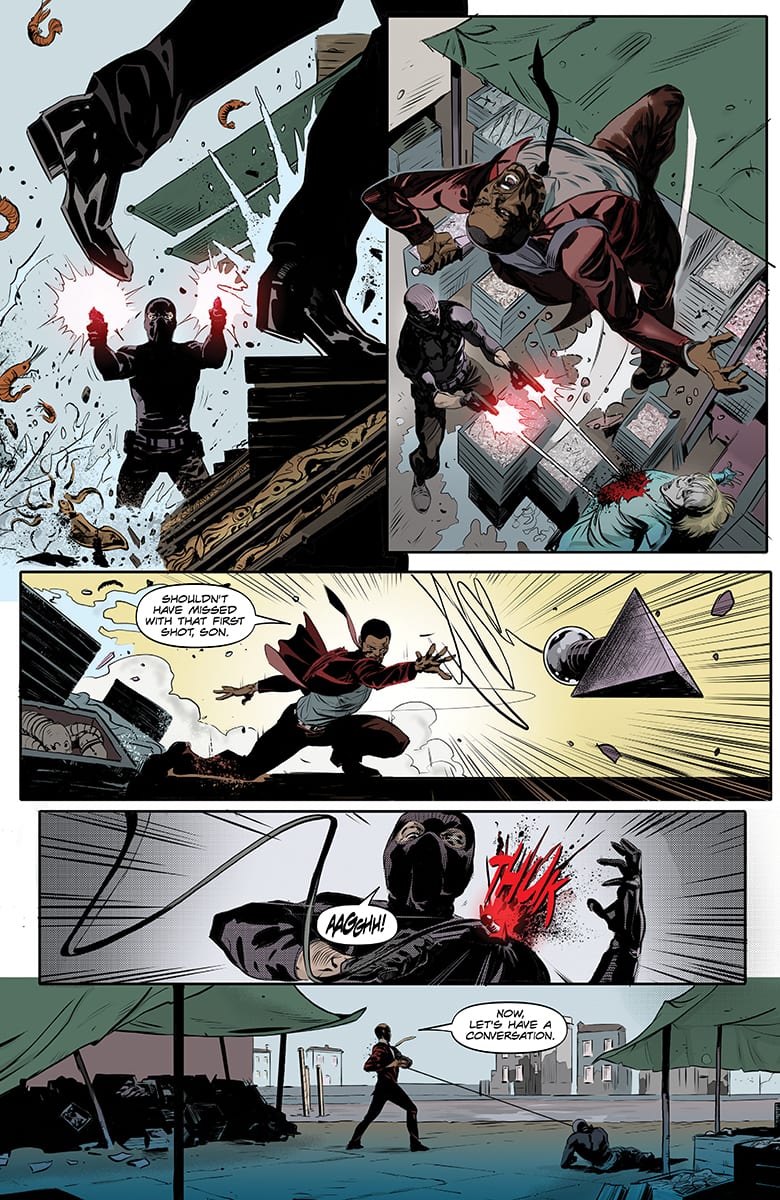 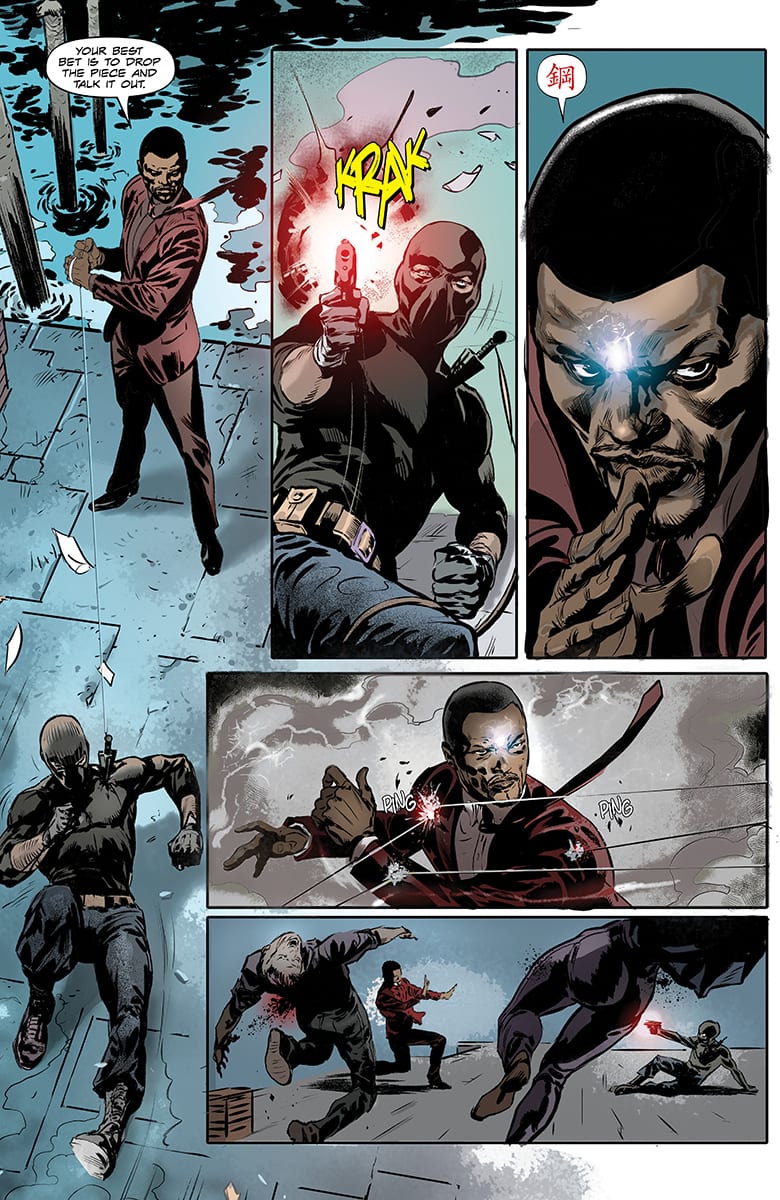 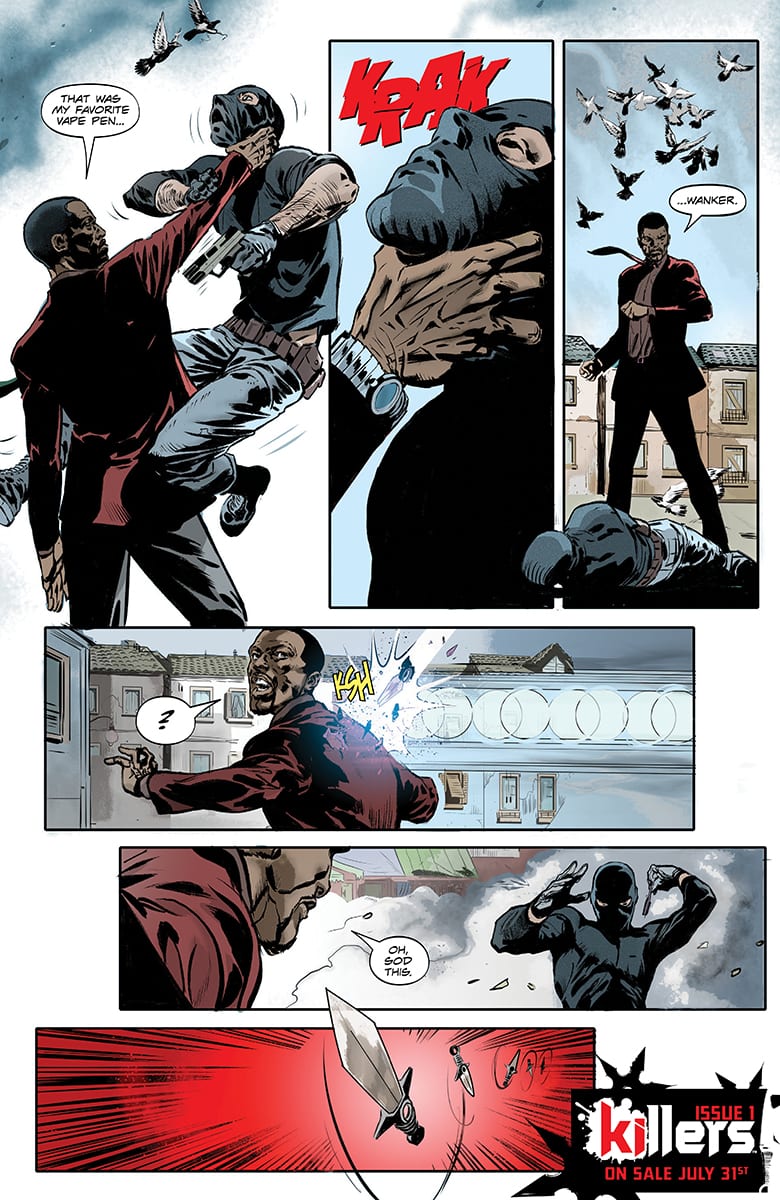