The Black Ghost, ComiXology’s latest orginal title, debuted this past month (you can check out our review here). The superhero title is the creation of Alex Segura, Monica Gallagher, Marco Finnegan, George Kambadias, Ellie Wright and Taylor Esposito.

Co-writer and co-creator Alex Segura was able to take time off his busy schedule as a novelist and co-president of Archie Comics to talk to us at Monkey’s Fighting Robots about The Blach Ghost. Check out the interview and make sure you check out The Black Ghost!

Monkeys Fighting Robots: First of all thanks for talking to us here at MFR!

Alex Segura: Of course! My pleasure.

MFR: Alex, we’ve talked before when you had written your novels and some of the Archie comics you helped pen. But this is your first creator-owned comic work. Can you tell us how The Black Ghost came to be?

Segura: Sure. I’ve always wanted to write superheroes – to add my bit to the tapestry that includes characters like Batman, Spider-Man, Daredevil, The Question, and so on. So, for years I’ve been jotting down ideas and just mentally taking notes as I read books I loved. When I got the chance to co-create Lethal Lit, the podcast at iHeart, with Monica Gallagher, we really hit it off – we sync’ed up so well, it was hard to believe. She’s a dream to work with. Once Lethal Lit wound down, we really didn’t want to stop working together, so I sent her a rough idea for a vigilante book – with a twist. Basically, it’d blend some of the themes I’d been exploring in my Pete Fernandez novels and we’d worked on together via Lethal Lit, through the filter of the superhero/vigilante. Monica was game, and she added some great stuff that took us in a really exciting direction. After that, it was just a matter of finding a home for it, and thankfully Comixology was interested.
MFR: In your own words, can you describe the premise of The Black Ghost?
Segura: The Black Ghost is the sole protector of the city of Creighton – a fading east coast city that’s seen better days and is slowly sinking into a pit of corruption. Enter cops reporter Lara Dominguez, who’s fled to Creighton after tragedy strikes her in her hometown of Miami. She’s fighting off her own demons and obsessing over Creighton’s vigilante, eager to figure out who’s behind the mask – to the detriment of her actual job at the local paper. When we meet her in #1, she’s fighting off a mysterious gang of thugs bent on taking out Ernesto, one of her GED prep students – which strikes her as part of a bigger controversy, one that will envelop her and the Ghost before too long.

MFR: There’s a lot of creative talent involved in this book. How is it working with such a talented group of creators?
Segura: It’s a dream, seriously. Everyone is really bringing their best to this book, from Monica to George Kambadais on art to Ellie Wright on colors to Taylor Esposito on letters and to our fearless leader, Greg Lockard, as editor. We all mesh well, everyone is a pro and easy to deal with, and I’m just feeling really lucky we were able to pool our resource and create such a fun, energizing book. It’s a real passion project.
MFR: How did you link up with co-writer Monica Gallagher?
Segura: We’d worked together on Lethal Lit, but we both come from comics, so it made sense to have our next project be a comic!
MFR: The Black Ghost is a ComiXology exclusive. Did having the book be a digital exclusive first impact it’s creation at all?
Segura: From a storytelling standpoint, no – but we were really impressed and psyched by the rollout Comixology gave it, from publicity to marketing to just feedback and assistance. They’ve been fantastic to deal with, and it’s an honor to see our book launch with so many great, creator-owned books.
MFR: Being a fan of your Pete Fernandez books, I see some similarities between Pete and Lara (and not only the Hispanic last names!). What is it about flawed protagonists like these two that you like so well?
Segura: I just find perfect heroes really boring! I like exploring the trauma of modern life, and how people overcome their pasts to rebuild themselves into something better. That’s a big part of both Pete and Lara’s story, that we’ll see roll out in different ways. 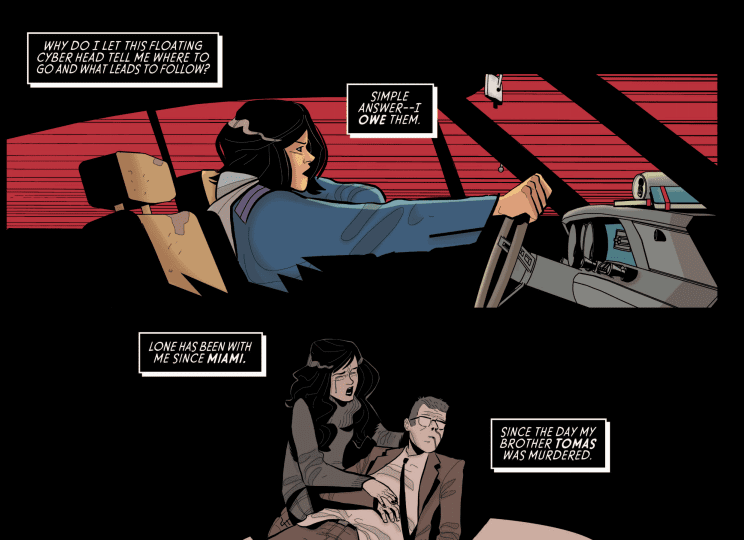 MFR: The book also blends a bunch of genres together: noir, mystery, old school superheroes. Can you give any specific genre examples, be they comics, movies or books, that influenced The Black Ghost? Was there anything on your mind or on your bookshelf specifically?
Segura: Oh, sure. In terms of comics, I feel like we owe a big debt to the work of Greg Rucka – Batwoman, his Question stuff, Gotham Central – all of that, really, fed into The Black Ghost. Same goes for Brian Bendis and Michael Gaydos’s Alias run, Kelly Thompson and Leo Romero’s Hawkeye, Jaime Hernandez’s Locas stuff, the entire run of Sandman Mystery Theater, and Brubaker’s Daredevil. I’m probably missing a lot of people, but those come to mind immediately. In terms of crime fiction, the work of Kelly Braffet, Megan Abbott, Laura Lippman, and Charles Willeford played a big part in Lara and the Black Ghost’s creation. 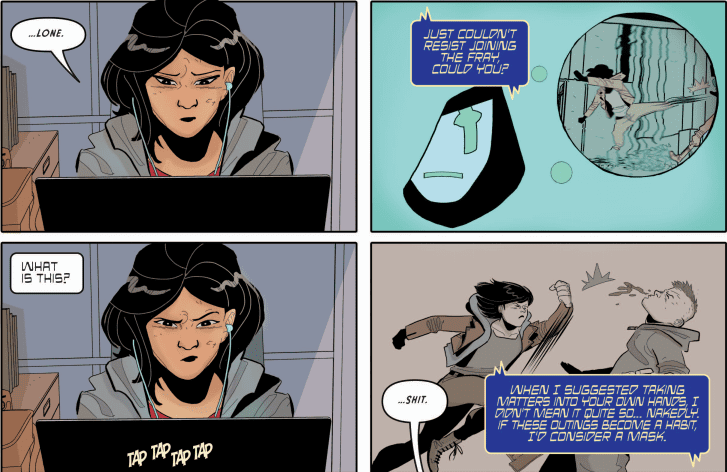 MFR: What characters might have influenced Black Ghost himself (I see a lot of ‘pulp’ in there, but personally I also see a bit of The Grey Ghost from Batman: The Animated Series.)
Segura: We wanted an iconic look and feel to him, so yeah, you’re right – pulp heroes like The Shadow, The Spirit, Doc Savage…we wanted him to feel iconic and larger than life. Batman also played a big influence, as did the Golden Age Sandman and just the general vibe of books like Astro City or Black Hammer – which is to say, referential and reverential.
MFR: Is your approach to writing comics different than writing novels?
Segura: Oh, for sure. It’s just so much more collaborative, which I think is a big reason I like to do both. Sometimes you want to play with others, sometimes you want to just work alone! But my approach is the same – I want to write about characters, and I want the story to spring from them, not build a story and have characters fit into certain holes. The best, most organic ideas come from lively, vibrant people – conflicted people looking to accomplish something, or spurred to do something. I mean, noir is all about pushing people to the brink and seeing what they do – for better or worse.
MFR: Can you give us a hint as to where the story is going after such a shocking ending?
Segura: I don’t want to spoil anything for those that haven’t read it – but I love that most people had no idea that was coming! I think readers will see a very different story from what they expected, but also one that honors the vigilante and comic book traditions, too.
MFR: Any plans for more ‘The Black Ghost’ after this initial mini-series?
Segura: Hopefully! We have a lot of ideas – and are hashing out a second arc now.
MFR: Anything else you want to mention? Anything you care to plug?
Segura: Well, Archie just announced ARCHIE MEETS THE B-52s, which hits in February from me, co-writer Matthew Rosenberg and artist Dan Parent – which should be a lot of fun, and in the same vein as books like ARCHIE MEETS RAMONES and THE ARCHIES.
Aside from that, my latest and final (!!!) Pete Fernandez novel, MIAMI MIDNIGHT, just hit from Polis Books – so fans can pick that up wherever books are sold!
MFR: Well, thanks again Alex! Always great talking to you!
Segura: Likewise, Manny!

You can check out The Black Ghost and many other titles over at ComiXology.